Skip to content
Always look at the date when you read an article. Some of the content in this article is most likely out of date, as it was written on November 9, 2002. For newer information, see our more recent articles.

We have a lot of processor and memory combinations to choose from today, and it is causing considerable confusion amongst our clients. With the disappointing performance gains of the newest Athlon XP processors and the recent price cuts in the high end Pentium4 line, the processor competition is as close as I’ve seen it in a long time. On top of that, questions of price vs. performance make memory selection a second difficult task. In this article, I will lay out the situation as clearly as I can, to help assist you in deciding what direction to take with your next computer!

The first thing I needed to do in writing this article is take a look at what I’ve written in the past. My first two articles were the Pentium4 vs AMD AthlonXP article and the System RAM Comparison article. Both proved very popular, and ended up being published on many hardware review websites and even in a midwest magazine. In looking back, the performance comparisons and my conclusions are no longer valid, but the technology explanations are definitions are still accurate even today. If you are not familiar with the architectural differences between the leading processors and memory types, I encourage you to give those articles a read as a prerequisite to this article.

AMD’s loss of the performance lead is not the only thing they have to worry about. In their struggle to keep up, they have gained one thing – heat, heat and more heat! This is a topic I am surprised is not discussed more widely on hardware review websites. At Puget Custom Computers we have the unique perspective that we’re not just benchmarking demo systems. We are building, selling, and most importantly, supporting these systems! In our commitment to support our systems, we gain the advantage of getting to see the long term performance of different technologies. 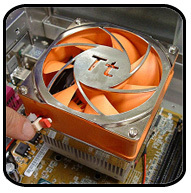 The high end AthlonXP processors run very hot, much hotter than their Pentium4 equivalents. That requires a very large heatsink and high RPM fan in order to keep them cool, and that is the first problem. High RPM fans are loud, and we have had a lot of feedback from our clients that they wish their AMD system was quieter. Now, there are certainly things we can do to help in this area – use larger fans with lower RPMs to deliver the same airflow volume at a lower noise level, but in the end, it is a simple fact – cooling requirements dictate the AthlonXP systems will be louder than Pentium4 systems. The larger airflow necessary to cool these also creates a secondary problem – they suck a lot of dust into the fan, which creates problems over time! This of course depends on the dust conditions that the system is in (you can dramatically help this condition by not putting your system on the floor!), but we have had many problems with fan failures on AMD systems. How many Pentium4 systems have we had this problem with? None, not one. So not only are Pentium4 systems much quieter, but are also more reliable in their cooling over time. This is quite certainly the largest drawback to modern AMD processors in my mind.

With all of the things Intel has going for it, AMD still beats them out in value. For the same amount of money, you are able to get better performance with AMD. This makes them very popular in our budget systems. The low end AMD processors are dirt cheap, and run cool enough that cooling is not a problem. So while the fact remains that AMD offers a better value than Intel, the question is: are these savings worth the fan noise and potential cooling problems? A good solution to this whole situation is found in water cooling, which can offer tremendous improvements in cooling for AMD processors. At the ultimate high end, an AMD processor is about $200 less than its performance equivalent from Intel, and if you put what you get with that savings into liquid cooling, you end up with a nearly silent computer. It may be the same speed as you would have received with an Intel system, but you gain the great cooling properties of liquid cooling for the rest of your system as well! 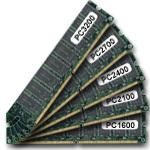 Memory technology, for the most part, is very similar to what we looked at in my last article. We have two main competitors – DDR-SDRAM and RDRAM. Conventional SDRAM is all but dead in today’s systems. Even the large manufacturers have wised up and have stopped pairing their Pentium4 systems with SDRAM memory. Such an arrangement absolutely killed the performance of the system, so it was only a matter of time before public awareness forced the big manufacturers to use less limiting memory technology. Both DDR and Rambus memory have seen performance increases – today the leaders are PC2700 DDR-SDRAM (also known as DDR333) and PC1066 RDRAM. Aside from special areas such as notebook computers and high end servers, these are the only two memory technologies that are worth considering at this time. We have already eliminated SDRAM, and PC800 RDRAM is also worth eliminating as well. Its performance is only marginally better than DDR333, at a much higher cost. The question, then, is which holds better value – DDR333 or PC1066 RDRAM?

With AMD systems, our answer is ultra-easy! AMD systems do not come with RDRAM compatibility, so our only option is the best option by default! For and AMD system, the best performance and value is most obviously seen in DDR333. For Intel systems, we actually have an option, so let’s give that a look.

First, it is worth saying that PC1066 RDRAM is clearly faster than DDR333. It can simply deliver more bandwidth. But at what cost? Is the performance increase worth the extra cost? That question is largely answered by the consumer when weighing the budget against the options. Unfortunately, it is not possible to simply say that RDRAM is exactly X% faster than DDR333, because the speed of your system is dependant on many things. Perhaps the most important is the degree to which the system processor utilizes the memory. AMD systems would not benefit from using RDRAM, because they have no need for that much bandwidth. Such is also true for low end Pentium4 systems – they simply are not fast enough to use all that bandwidth. The 533MHz front side bus processors, however, can use nearly all the PC1066 has to offer. So, in the end, we have this recommendation to make: if you are using a Pentium4 system slower than 2.4GHz, you will find nearly the same performance as PC1066 RDRAM with the cheaper DDR333 memory. If you have a ultra-high end Pentium4 system, then you can actually make good use of RDRAM and should consider it as an option. The faster your processor, the more performance gain you will see with PC1066 RDRAM. 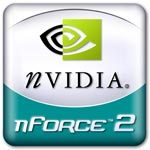 The biggest thing on the horizon right now is dual-DDR chipsets, such as nVidia’s nForce2 chipset. These motherboards will use two DDR sticks concurrently instead of only one at a time as today’s chipsets do. Will this double the memory bandwidth? No, the overhead of the system doesn’t allow for that, but it does make a very aggressive push that will make PC1066 RDRAM very difficult to justify! Look for these chipsets in the first quarter of 2003!

So, we have seen that while Intel clearly holds the performance lead, we still have a better value with AMD. The question is whether we can use this price savings as a justification for deal with all of AMD’s problems! In the end, we found that the best way to overcome the heat and noise problems was with liquid cooling, ultimately gets us approximately the same performance as a stock Pentium4 system at the same price. So the processor race is still neck and neck!

Memory is a lot more obscure and confusing, but we can immediately eliminate SDRAM and PC800 RDRAM. Of the technology remaining, PC2700 DDR memory is clearly the best value, but high end Pentium4 systems with a need for speed can still get that performance edge from PC1066 RDRAM.