In this article we are going to look at several NVIDIA Quadro GPU (video card) options that you might consider in an engineering workstation to see exactly how they compare in Revit 2017.2. We will also include Intel's HD630 graphics, built into some of their Core series processors, to get a baseline for integrated GPU performance.

If you are interested in how well different hardware works with Autodesk Revit, don't miss our article on CPU performance.

This hardware is based on what we found to perform best in most aspects of Revit, and similar to our recommended Revit workstation for modeling and design. The Quadro cards we are testing are the latest Pascal based models, and the P2000 through P6000 are officially certified by Autodesk for Revit 2017. The P1000 was also included to look at performance at a lower price point, still within the Quadro line, and Intel's HD 630 graphics were tested as well. That should provide a good baseline, as it is built into the Core i7 7700K processor itself. Here is a chart of these GPUs, with links to more details on the various Quadro models:

We used the Standard version of the benchmark, which performs three runs of the tests and then averages the results. The maker of the RFO Benchmark recommends the Extended test for video card comparisons, but we consistently ran into a journal error when attempting to run that version. After discussing this with the benchmark creator on the Revit Forum, we decided to go ahead and publish the Standard results for now. When we revisit Revit 2018, with the updated version of RFO Benchmark, hopefully the issues will be resolved and we can perform the Extended testing for an even better look at these GPUs.

The RFO Benchmark breaks down results into several categories. Since we are testing video cards, we will first focus on the Graphics portion of the test. Results are presented compared to the top-end Quadro P6000: 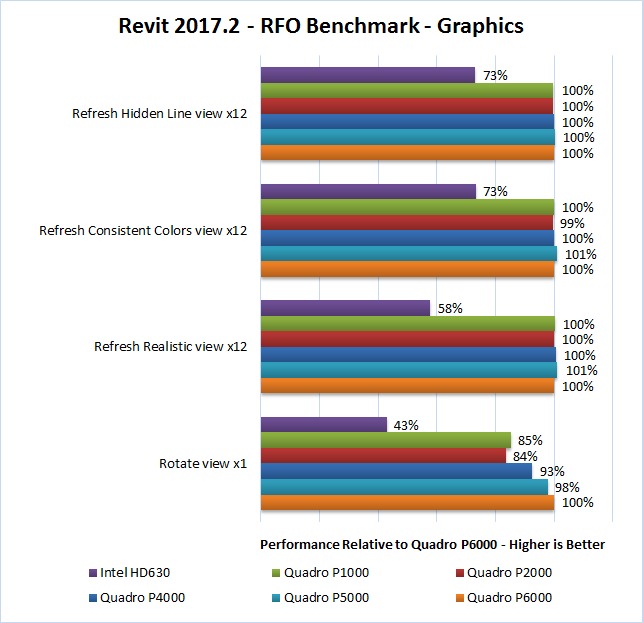 When refreshing views, all of the Quadro cards performed the same (within margin of error). Intel's HD 630 graphics fell behind here, though that could be due to additional overhead that the Core i7 processor has to deal with when using its built-in graphics. That increases heat within the CPU and shares a portion of the system's RAM and memory bandwidth, so in addition to being a slower graphics solution it could also be causing the CPU itself to perform more poorly.

The Rotate View test showed a little more variation between the Quadro cards, though, while also returning the Intel graphics lowest performance. The difference between the Quadro models is not huge, but the P1000 and P2000 dip around 15% below the P6000. If you are working with particularly complex structures, it would be a good idea to err on the side of caution and get one of the more powerful Quadro models.

In the interest of completeness, we also looked at the overall scores from the RFO Benchmark in other areas besides just graphics: 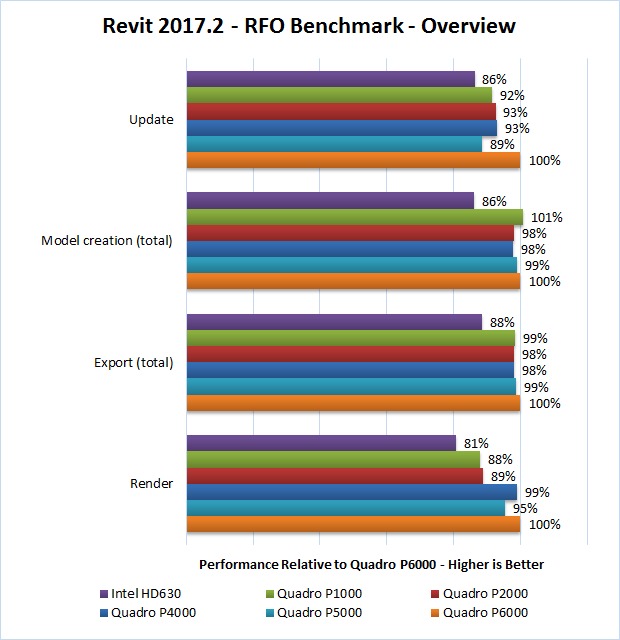 The various Quadro models all performed very similarly in model creation and exporting, which makes sense since those are primarily CPU bound. The Intel graphics chip did score lower there, likely because of the impact that using it has on the processor itself (as mentioned above). Updating also saw some difference across the tested GPUs, but given how short and infrequent of a process it is this result is probably not a big deal.

What is more interesting, though, is the impact of the video card selection on rendering performance. The lower-end Quadro models, P1000 and P2000, fall more than 10% behind the P6000 in this area. Some rendering engines are starting to focus on the GPU for ray-tracing calculations, but if that was the case here we would see even more disparity between the various models. We don't have a good explanation for these results, but it is clear that if rendering is a big part of your workload you should aim for a Quadro P4000 or higher to ensure that the video card does not hold back your render speeds.

The above graphs are pretty clear: for most of Revit, any of the Quadro card will do just fine. We do generally recommend sticking with the models which are officially supported by Autodesk, so for general modeling the Quadro P2000 is a great option – while for more advanced models or if you do a lot of rendering the P4000 is a stronger choice without costing a ton more. Going above that has minimal benefit within Revit, especially considering the cost of higher-end Quadro cards.

Because of the general split between rendering and modeling behavior, there is not single system that will be the best for all Revit use cases. That is why we have created two recommended workstations for Revit: one for general modeling & design and one with an emphasis on rendering performance. Both offer the full range of Quadro cards, though, as well as GeForce options for those who aren't concerned with official Autodesk support.