In this article we are going to look at several Intel CPU options that you might consider in an engineering workstation to see exactly how they compare in Revit 2017.2. We will also look briefly at the impact of Intel's Hyperthreading technology on Revit performance.

If you are interested in how well different hardware works with Autodesk Revit, don't miss our article on Quadro GPU performance.

To see how the different Intel CPUs perform in Revit 2017.2, we used the following configurations:

These test configurations include four different CPU models across two different platforms. For modeling in general, we typically would recommend a high clock speed processor, with less emphasis on the number of cores, although we opted to include the 6-10 core models from Intel’s “enthusiast” platform. This provides two insights: first, we can see if there are any parts of the Revit workflow which will benefit from additional cores. Second, we can see how much of an impact the lower clock speed that accompanies high core count processors will have on performance.

A note about RAM: even though the two platforms we tested support different maximum memory configurations, that does not impact Revit performance. Our testbench systems are normally equipped with large amounts of RAM, but in reality only 16-32GB is needed for the vast majority of work in Revit and similar applications.

We used the Standard version of the benchmark, which performs three runs of the tests and then averages the results. The results are presented below using percentage based comparisons to the Intel Core i7 7700K as a baseline.

As mentioned, the RFO Benchmark breaks down results into several categories. Some of these consist of many steps, so to provide an overview the results from those sections were totaled and are noted as such in the chart below. If you are curious, the individual steps can also been seen in additional charts below the main overview. 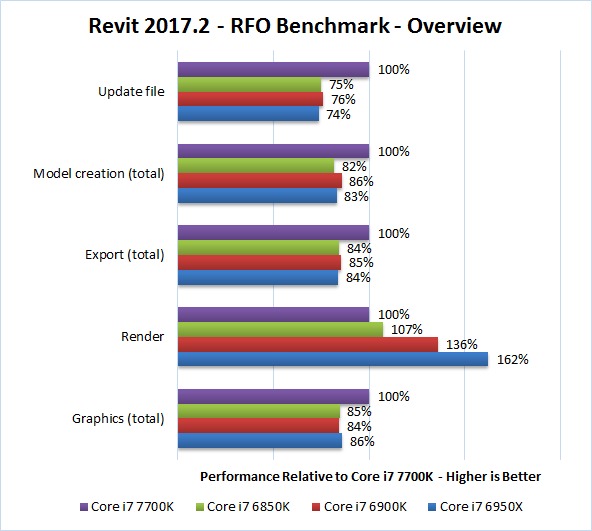 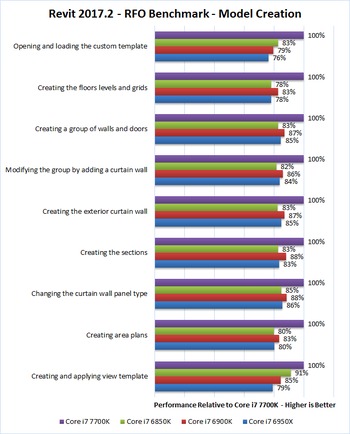 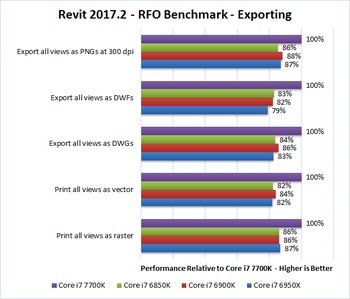 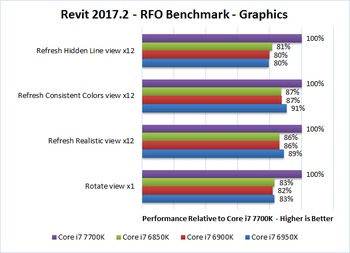 As expected, the high clock speed of the Core i7 7700K took the crown across all categories except rendering. This fits with what we have seen in other lightly threaded applications, both those focused on engineering and programs more often used in content creation. Adding cores does not help with this workload, and instead the performance drops because of lower per-core clock speeds. The amount of performance loss varies between about 15 and 25%, with updating a file being the most hard-hit.

However, in the rendering results we see the opposite. More cores is extremely helpful here, with more than a 60% average improvement with a Core i7 6950X 10-core chip. It isn't perfect scaling, but if rendering is something you find yourself waiting on more than general modeling tasks then investing in a more powerful (and expensive) CPU may well be worthwhile.

In addition to comparing CPUs directly, we wanted to investigate how much impact Hyperthreading has on Revit performance. This is a feature that has been standard on Intel's Core i7 processors for years, and is also found in some other product lines. It works by duplicating part of the hardware inside each core, effectively allowing the CPU to be working on one thread while keeping another ready to go as soon as the first is finished (or hits a pause). To the operating system, this causes twice as many cores to be reported as there are actually present in the CPU, so that the OS and applications can assign more threads and utilize the feature.

Unfortunately, there are some programs where this actually hurts performance more than it helps – most notably, situations where threads continue for long periods of time without interruption. In that case, having a thread assigned out to a CPU that isn't able to work on it for a long time can cause problems – as can forcibly interrupting the first thread on a given core so that the second can get some attention.

Because of this potential for trouble, testing a single processor with Hyperthreading both on (as usual) and off is helpful. In this case we used the CPU that is fastest for most Revit tasks: the Intel Core i7 7700K. Hyperthreading is easily disabled in the BIOS of most motherboards, and without changing any other settings we can get a direct head-to-head performance comparison.

As with the previous charts, we created an overview of the results from each section of the RFO Benchmark and noted when sections are totaled. If you are curious, the individual results can also been seen in additional charts below the main one. 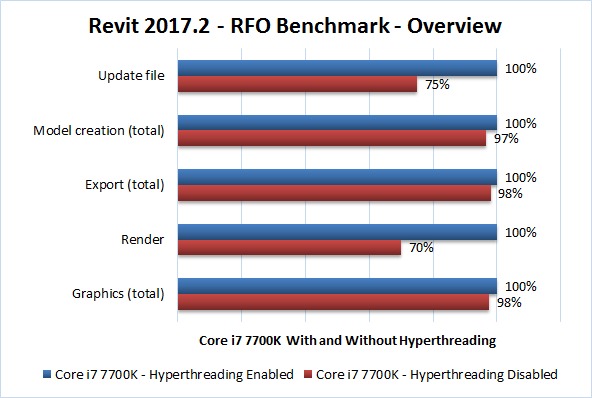 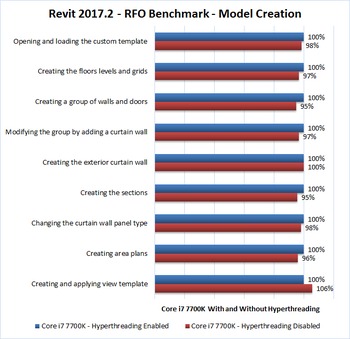 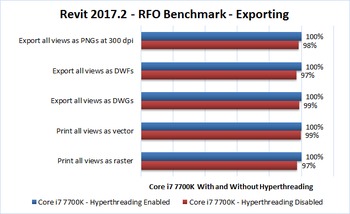 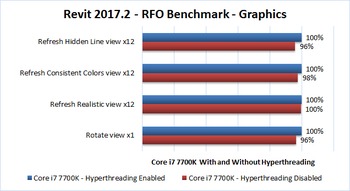 It is clear from the charts above that having Hyperthreading enabled improves performance across the board in Revit. While the impact on modeling and graphics is minimal, the big rendering boost makes sense. That type of workload is well threaded, and very good at utilizing multiple CPU cores as we saw in the earlier results. Because of the huge 30% difference there, we would recommend sticking with a Core i7 rather than a Core i5 (or other processor lacking Hyperthreading) unless you are on a very limited budget.

This chart sums up the CPU situation in Revit: 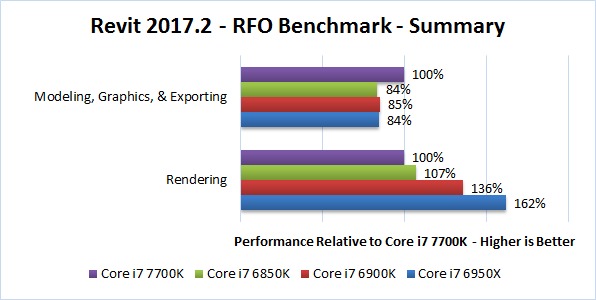 For most of the Revit workflow, clock speed is the key metric – while for rendering the CPU core count is a bigger factor (though of course clock speed still plays a role). This means that, for most Revit users, the Core i7 7700K is the way to go. Its high 4.2GHz base clock speed with Turbo Boost of up to 4.5GHz gives it a 15% lead in modeling and graphics over the higher core count models.

If rendering is a bigger part of your workload, it is worth considering whether an 8+ core count processor will fit in your budget. As of the time of this publication, the top six-core option from Intel isn't really worth it: the gain in rendering is small (7% or so) making the additional cost unpalatable. With the eight-core i7 6900X there is a 36% improvement in rendering, though, and with the ten-core i7 6950X that goes up to 62%. Both of those are ideal for render-heavy workloads, but there is a trade-off with higher core count CPUs in the form of reduced modeling performance. Interestingly the 6-10 core processors all perform about the same in modeling and graphics, likely due to them sharing a single-core Turbo Boost speed of 4GHz.

Because of this split between rendering and modeling behavior, there is not single system that will be the best for all Revit use cases. That is why we have created two recommended workstations for Revit: one for general modeling & design and one with an emphasis on rendering performance.