Skip to content
Always look at the date when you read an article. Some of the content in this article is most likely out of date, as it was written on January 1, 2002. For newer information, see our more recent articles.

Even though many of you undoubtedly have a good understanding on the subject, this article has a natural beginning in a conceptual explanation of the function of RAM in your computer system. RAM acts as a buffer to speed up access to your programs and files that are in use. Though all of your data is stored on your hard drive, ram is much much faster. It is capable of a much higher bandwidth, meaning that it can transfer more data at a faster rate, and of a much lower latency, meaning that the delay between the time the data is requested and when it is sent is much shorter. Whenever your computer pulls up a file off the hard drive, it loads it into your system RAM so that it can continue to access it faster. The end result is a much faster interface with your computer. The more RAM you have, the more programs and files your computer can keep stored in your RAM. That is why people who run multiple programs at one time often need more RAM — since more programs are being run at once, the computer needs more space in order to have them all ‘on hand’ at the same time.

SDRAM and a Problem

A very important aspect in the performance of a computer is the elimination of any ‘bottlenecks.’ A bottleneck is a component of your computer that is comparatively slow. For example, if you have a nice new computer system, but insist on using the hard drive you bought back in 1992, then your hard drive is most definitely a bottleneck. Your computer can work as hard and as fast as it wants, but any time it uses the hard drive, it has to just sit and wait as the comparatively slow hard drive does its job. For the last six years, SDRAM has been the standard type of RAM for consumer level computers. In this time, the RAM has not changed, while the speed of other components has been steadily rising. It should not be surprising, then, that SDRAM now presents a bottleneck to the rest of the computer system. The bandwidth of the ram is simply not large enough to accommodate the abilities of the rest of the system.

While SDRAM has made one more kick with in increase from PC100 to PC133 (and even the rare PC150), this kick is most likely its final one. The obvious solution is to find an entirely new RAM design. The problem is bandwidth — we need more. In order to keep the RAM from being saturated and becoming a bottleneck, the RAM must be able to deliver to the rest of the system without causing the system to have to wait. Currently, there are two major designs competing for the new standard, and they are very different in their approach. 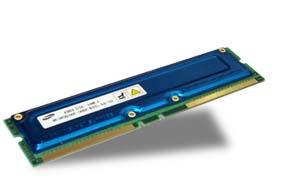 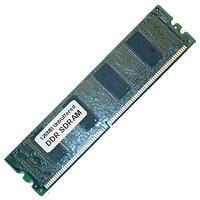 On one hand, we have Intel with RDRAM, an implementation that has been designed and marketed to go hand-in-hand with the Pentium4 processor. On the other hand, we have AMD and VIA with DDR technology, which is most commonly seen with AMD Athlon processors.

Both implementations solve the bandwidth problem, and have competitively co-existed for almost a year now. However, both are aiming to become the new standard in consumer level computer systems, and it is expected that only one will stand the test of time.

The New Standard of Performance

Let’s begin with Intel and RDRAM. RDRAM is a totally new design, and its approach is to simply operate at a much higher frequency. While PC100 SDRAM runs at 100MHz, RDRAM runs at a much faster 400MHz. Adding to this impressive operating rate, RDRAM also reads and writes at both the rising and falling edge of a clock cycle, while SDRAM writes only once per clock cycle. Now, this does not mean that it is capable of eight times the bandwidth. To achieve the higher frequency, RDRAM runs on a 16-bit bus (while SDRAM is 64-bit). After all the dust clears and we look at raw performance, we see that RDRAM is capable of roughly twice the bandwidth as SDRAM.

AMD and VIA have taken a very different approach with DDR technology. While RDRAM represents an entirely new memory technology, DDR-SDRAM is nothing more than an evolution of the existing SDRAM technology. Like RDRAM, DDR transfers data on both the rising and falling edges of a clock cycle. Its name is very representative of what it is — Double Data Rate SDRAM. Since it is otherwise nearly the same as SDRAM (same frequency, same bus width), it is easy math — DDR-SDRAM is capable of twice the bandwidth as the old SDRAM.

While both implementations have achieved the goal of providing far more bandwidth than SDRAM, both have their faults as well. We begin again with RDRAM. As anyone who has purchased RDRAM can tell you, the largest and most noticeable downside to RDRAM is its cost. While RDRAM has now established a moderate foothold in the market, it had to work very hard to get there. It began with the fact that RDRAM is proprietary, meaning that any manufacturer who wished to produce it had to pay royalties to Rambus. On top of that, since RDRAM was an entirely new technology, production plants had to be redesigned to produce it. Lastly, initial problems with the technology made manufacturers anything but eager to get started. The end result was a very rocky road for RDRAM, meaning very high prices.

A second concern with RDRAM is its higher latency. Because it only operates on a 16-bit bus, the commands sent to the RAM are forced to be serialized. If you have 64 people trying to get through 16 doors, some people are going to have to wait in line, and that is exactly what we see with the commands sent to RDRAM. This is usually only a very small problem, but if a large series of small chunks of data are requested from RDRAM, its performance suffers. Since most applications benefit greatly from the high bandwidth, this has not yet become a large problem. The concern exists that this is a design flaw that will eventually come back and hit RDRAM.

Lastly, RDRAM suffers from high temperatures. Wonder why RDRAM is equipped with metal plating? Think of that as a low level heatsink. In fact, early designs of RDRAM called for active convection cooling, meaning a heatsink and fan for your ram! To work to solve this problem, the modules on RDRAM power down when not in use. In fact, only ONE module is powered up at any given time. The rest sit in standby mode, where they produce far less heat. The biggest drawback to this solution is that it takes nearly 100ns for a module in standby to power back up, which certainly does not help with the latency issue already present in RDRAM.

While I seem to have a lot to say about the weaknesses of RDRAM, DDR-SDRAM is not a perfect solution either. Because RDRAM is an entirely new technology, and DDR is a mere adaptation, it should not surprise us that RDRAM is much more efficient. While the old SDRAM was about 75% effective in utilizing the bus, DDR takes a drop and can only offer 65% efficiency. Compare this to RDRAM, which is at 85%, and we see a very poor efficiency! Luckily for DDR, this seems to be its only major flaw, and is often overlooked since DDR is still capable of the same effective bandwidth as RDRAM.

As with any computer issue, strength in the market is often the largest factor in the success of a technology, just as I said in the Pentium4 vs AthlonXP article. In this respect, DDR had a large lead on RDRAM. It all comes back to the fact that RDRAM is an entirely new technology. DDR has been used for quite some time for video card memory, which made it an already-established technology. Further, since only small changes to factories were required to begin production, it is also a more readily available technology. Those two factors are a huge blow to RDRAM, and the marginal performance gains that RDRAM can offer over DDR is not enough to justify the higher cost in the mind of most informed consumers. RDRAM has survived, unmistakably, due to the partnership it found with the Pentium4 processor. I continue to have great respect for the Pentium4 marketing, as it is highly effective, and has captured the support of 85% of today’s market. RDRAM is along for the ride, being sold in nearly all of today’s Pentium4 systems.

However, with the high cost of RDRAM, and the high demand of the Pentium4 processor, a great demand exists for more variety. Right on cue, we see it happening. New chipsets are allowing a Pentium4 processor to be used with DDR-SDRAM, which is wonderful news. The result is a Pentium4 system with approximately the same speed as a system with RDRAM, at a much improved cost! This is quite possibly the best thing that could happen to the Pentium4 processor. However, we see another chipset that has become quite popular with the large computer manufacturers. This chipset allow the Pentium4 to be used with standard SDRAM. The point of this chipset is to further reduce the costs of the Pentium4 systems. Be wise — do NOT fall for this. If you would like a striking example of a bottleneck, there it is. The SDRAM, twice as slow, is an absolutely enormous bottleneck for the Pentium4 processor, and is by no means worth the small decrease in price for the overall system. You would be better off saving money and grabbing a PentiumIII system.

So, it appears that DDR is in a strong position, and that as the new Pentium4-DDR motherboard become more widely available, that its position will become even stronger. I predict that RDRAM will be all but non-existent by this time next year. At the same time, however, Rambus must be commended for their efforts. To roll out an entirely new technology and push through all their problems was not a small task, and they have done very well. RDRAM continues to be the standard in very high-end systems that require high levels of data transfer. Puget Custom Computers continues to recommend it for high-end video editing workstations. However, if you do not stand to directly benefit from the slightly higher bandwidth and ‘tried and tested’ nature of the Pentium4-RDRAM systems, this does not seem the time to invest in that technology. I am personally still not ready to move to a Pentium4-DDR system, but as a few more months pass and the technology develops and settles into the market, it appears that it will be a quite popular and justified choice for the Pentium4 market. As I stated in the Pentium4 vs AthlonXP article, an AMD Athlon system with DDR-SDRAM continues to hold onto the lead in my mind as a high-performance system at the best price.