When I did my recent AMD Threadripper 2990WX HPL Linpack “How-To” most of the time I had with the processor went into getting that to work. However, I did run a few other test jobs that I thought the 2990WX would do well with. I compared that against my personal workstation with a Xeon-W 2175. In this post I share those test runs with you. It’s not thorough testing by any means but it was interesting and I was surprised a couple of times with the results.

The post How to Run an Optimized HPL Linpack Benchmark on AMD Ryzen Threadripper — 2990WX 32-core Performance is a good read for a high performance compute perspective on Threadripper.

Note: I have results for the NAMD jobs runs including an NVIDIA Titan V. NAMD has good GPU acceleration but needs a lot of CPU performance to balance that.

The AMD Threadripper system I used was a test-bed build with the following main components,

The Intel system is my personal workstation

I’ll start with the Linpack benchmark that I went to great pains to optimize and compile for AMD Threadripper. For the Intel benchmark I’ll just use the omp threaded binary included with Intel MKL.

Linpack is my favorite benchmark for CPU performance because it exposes near maximium processor double precision floating point numerical performance. It is a good measure of how well optimized (vectorized) numerical linear algebra, matrix/vector algorithms will perform. That is basis for the majority of scientific high performance computing software.

The Intel “X-series” and Xeon -W or -SP are much faster for this kind of intense compute workload. Here’s why,

The Intel AVX512 vector units provide great performance for well optimized code … but keep in mind not all code is well optimized (or at least not well vectorized).

NAMD is a molecular dynamics program. It has very good parallel performance. It has good parallel scaling on systems ranging from multi-core workstations to the largest supercomputers. It also has very good GPU acceleration. GPU’s greatly improve performance but NAMD has a significant portion of code that needs to run on CPU. It is important to get a balance between CPU and GPU for best hardware utilization. 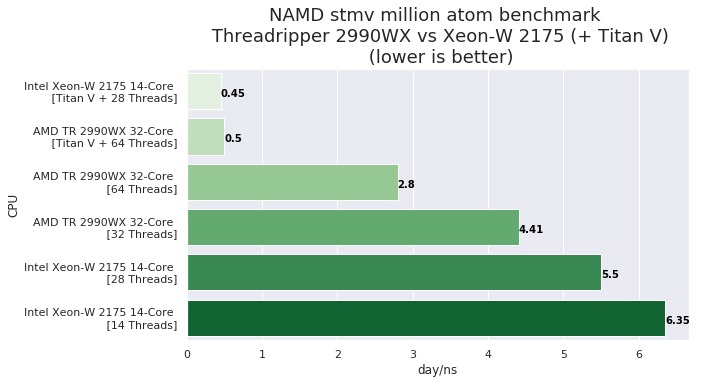 Note that the Threadripper 2990WX was nearly twice as fast as the Xeon-W 2175 for the CPU only runs. With the addition of the Titan V the performance was much closer for both processors. This may indicate that the 2990WX would do better with more GPU’s. I don’t know that for sure because I didn’t test with multi-GPU’s. Balance is important with NAMD and you need a lot of CPU performance to keep up with newer NVIDIA GPU’s. It would be interesting to test the 2990WX with 2 x 2080Ti’s or perhaps 4 x 2070’s. If there is interest I may see if I can do that testing.

I ran this benchmark from the Phoronix test suite. I wanted to see the non-floating point performance on the 2990WX and compiling a large code base is an important application. Compiling a software package consisting of a large number of source files can often be done with a lot of parallelism. I expected that the Threadripper 2990WX with it’s 32-cores would be a good processor for this and, indeed, it did quite well.

That’s all of the performance testing results I have for the Threadripper 2990WX. I still feel that the Intel X-series and Xeon -W (and -SP) are “generally” better processors for HPC workloads. But, note that I said generally! I’m thinking about code that I would compile and optimize myself! I would make an effort to get good vectorization and for that the Intel AVX512 vector units are great.

How do you know if the programs you want to run will do well on the high core count AMD Threadripper processors?

Here are a few considerations;

I enjoyed the Threadripper 2990WX. Having 32-cores to play with makes you think differently. It’s like a “single node cluster” … kind of … really it felt a lot like Quad socket system that would have cost $25000 a few years ago!