There is a recording at the link above (requires registration). The **++(Xeon 3265W and EPYC 7742)** part of that title was added after we had scheduled the webinar. It made the presentation a lot more interesting than the original Threadripper only title!

That webinar was a discussion of testing results that I had not published as a blog post. This post remedies that.

The testing results should give you an idea of how these processors perform with respect to,

The 4 systems under test

Three of the test systems are using processors that we currently offer in workstation configurations; TR 3970x, 3990x and Xeon 32xxW. We are in the process of qualifying EPYC single socket platform components for workstations and dual socket machines. I wanted to include EPYC in this testing to compare memory subsystem performance to the Threadripper. The EPYC system I used was a dual EPYC 7742 instance running on Azure.

HPL Linpack is the standard performance ranking benchmark for the Top500 Supercomputer List. It is a good measure of raw floating point compute performance and can make good use of vector units (AVX). It's my favorite CPU benchmark.

This benchmark is a simple Frobenius norm of a matrix Product,

This is a demanding benchmark that is limited by memory subsystem performance. It was designed as compliment to HPL to give a better overall indicator of HPC systems performance. It is now a secondary benchmark for the Top500 Supercomputer List. I haven't used this in the past but I think it may now be my second favorite CPU benchmark!

Note: You have to set the problem size large enough that the calculation doesn't just run in the processors cache. You want to test the whole memory subsystem. Here is the HPCG.dat file that I used for the testing,

NAMD also has very good GPU acceleration! (will show some of that in the charts)

Now on to the good stuff!

The top 4 results in the chart below are from the processors tested for this article. The others are included for comparison. 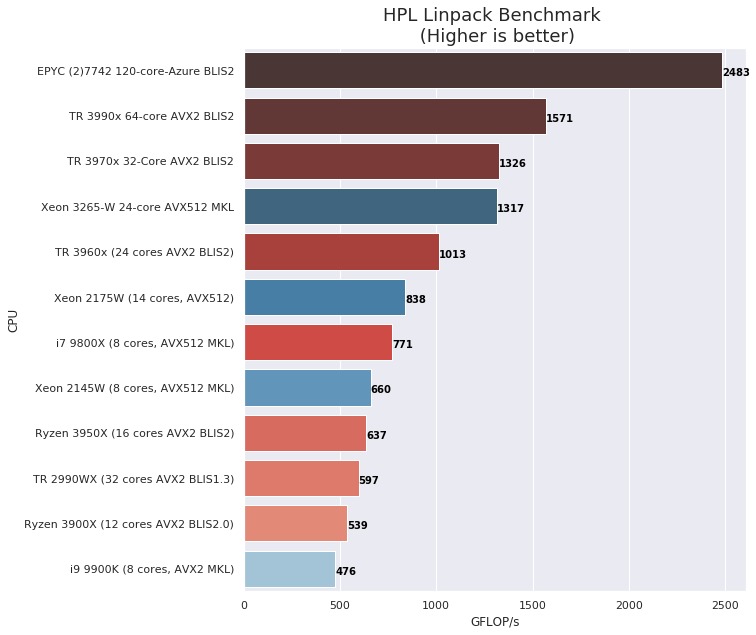 Notes: There are a few notable comparisons in the chart,

This chart with results for the TR 3970x and 3990x is included to show core scaling and as a reminder that true linear scaling is not possible because of the dynamic clocks in modern processors. The dashed line is "ideal" scaling adjusted for the change of core clock going from max-turbo to all-core-turbo as the number of cores in used increases. For a discussion of Amdhal's Law see the excellent wikipedia article. 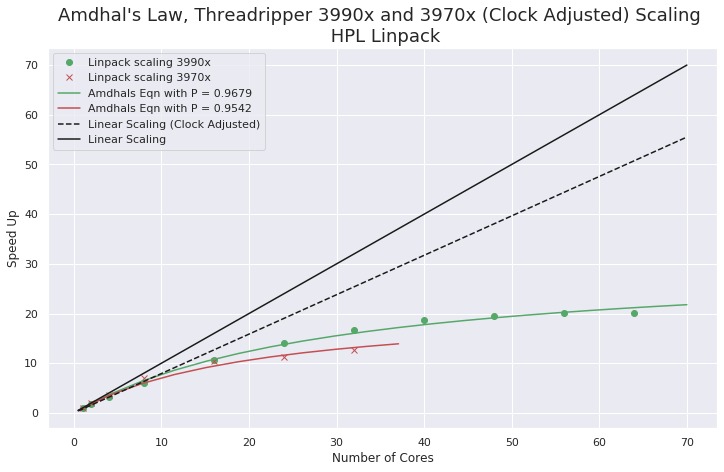 This simple Python numpy test is still taking advantage of linked BLAS libraries for performance. With Anaconda Python distribution the default link is to Intel MKL, however you can create envs using OpenBLAS. It is also possible to set a debug mode for MKL so that it thinks it is using an AVX2 type of processor. I first discussed this in a post in Aug. 2019.

There are three job runs with the Xeon-W 3265 in the chart. The worst result is from using numpy linked with the same OpenBLAS that was used (and performed well for) the AMD processors. Using MKL with debug mode for AVX2 improved the result somewhat but the full MKL result for the 3265 is nearly double that of the OpenBLAS result. Note that the OpenBLAS version used does not have AVX512 optimizations.

The chart below shows the core scaling. The light blue, black and dark blue lines are for the Xeon 3265 runs mentioned above. Performance for the two high core count AMD processors leveled off significantly near max core count. The TR 3970x scaled well to its max core count. 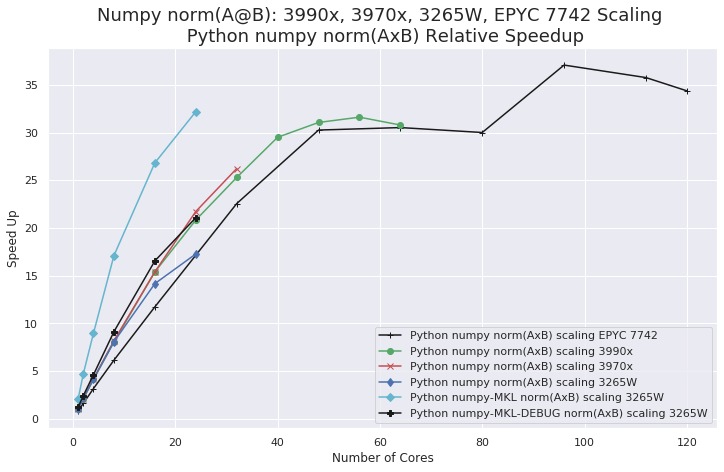 This is the first that I have used HPCG for CPU benchmarking and I will definitely continue to use it. These results are "eye openers"! HPCG is memory bound. This is a common problem for many applications especially differential equation solvers. Really most computation is memory limited to some extent which is why so much effort is put into cache architectures, pre-fetching, branch prediction etc.. The EPYC has 8 memory channels per socket and the Xeon W has 6 memory channels. The Threadripper processors have just 4 memory channels. That makes a big difference in this benchmark!

To me the most interesting chart in this post is the HPCG core scaling. You can clearly see the performance limitation from the memory subsystem. The Xeon W and the EPYC scaled with a smooth leveling-off near max cores. The Threadrippers essentially both peaked by 8 cores! There was no special optimization done for the HPCG build. It's that same code built the same way for all of the processors. I feel this a very good comparative benchmark for memory performance and representative is many real-world problems. 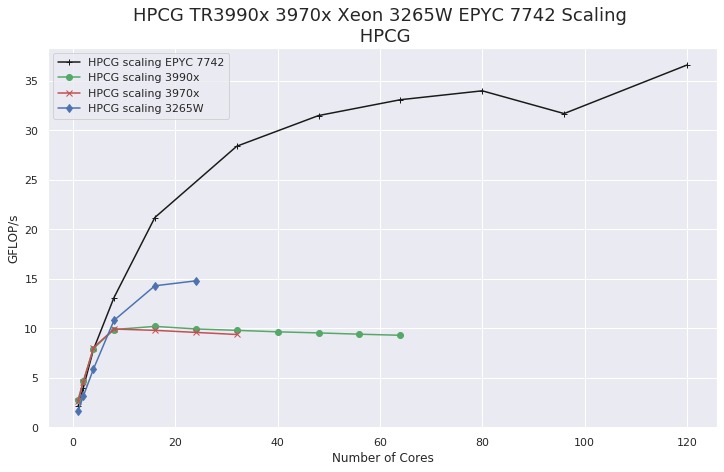 NAMD is a very good molecular dynamics program with excellent parallel scalability. It makes a good benchmark because it is easy to setup and use and has good performance on a wide range of platforms. It was also one of the early codes to take advantage of GPU acceleration. There are parts of the dynamic forces that need to computed on CPU and some that work well on GPU. It give best performance when there is enough CPU capability to keep up with GPU's. You roughly need 12-18 CPU core per one NVIDIA 2080Ti level of GPU for good balance and hardware utilization.

The results are in units of day/ns. Thats days to compute 1 nano second of simulation! NAMD jobs can run for a long time with big simulations even on modern high performance hardware. 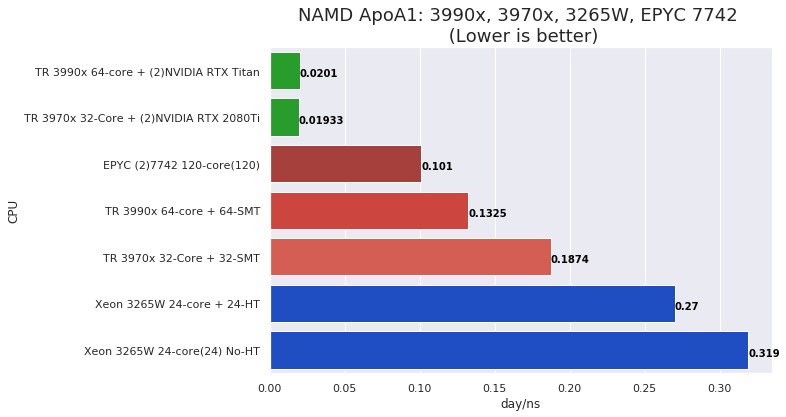 An interesting aspect of these job runs is the benefit from using Hyper threads or SMT threads when running on CPU only. When GPU's are included this no longer applies and "non-core" threads actually slow things down (which is often the case for many high performance applications). 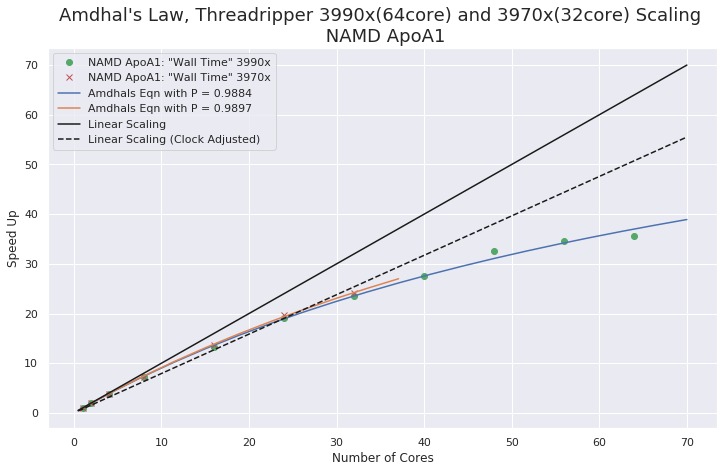 The scaling plot shows the great parallel scaling of NAMD on CPU cores. This is from my Threadripper testing with the dashed line representing "Adjusted Linear" scaling accounting for core clock frequency shift going from Max turbo to All-core-turbo.

The SMTV job is approximately one million atoms. That is a very large simulation, and it was a landmark calculation with it was first achieved. With modern supercomputer clusters it is possible to now do much larger simulation. That's an example of computing capability pushing the boundaries of possibility with science. 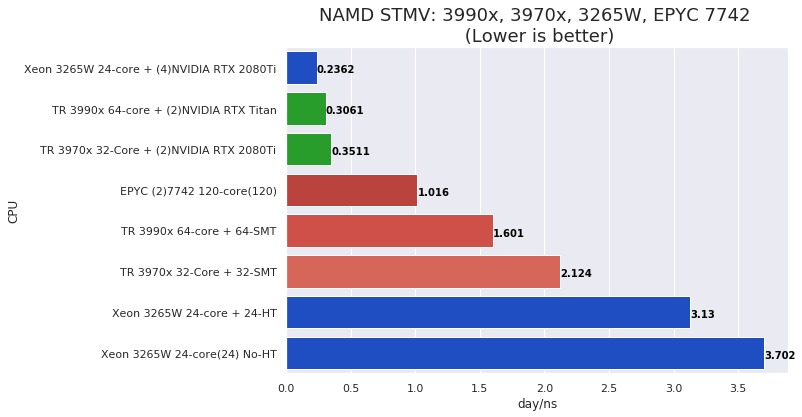 Since this job run is much larger than the ApoA1 job you see more separation from performance efficiency across the tested systems.

These are all great processors!

I was particularly impressed by the Threadripper 3970x 32-core. The 32-cores of that processor were well utilized and gave a very good performance value (it is significantly less expensive that the other 3 processors tested).

There are wonderful high performance workstation CPU options available now! And, it is only getting better. I am very happy with the current AMD Zen2 based processors and looking forward to seeing processors on Zen3 and especially Zen4 (with AVX512). Intel is also looking strong going forward and I am quite happy with the current Xeon W 64L platform. They appear to be refocusing on their strengths and consolidating some of their lineup. Their software ecosystem efforts are also looking interesting. OneAPI is certainly an ambitious project and hints at future support for new accelerated computing hardware.