I have a newer blog post about doing CUDA setups on Ubuntu that you might find more useful than this post –dbk
"Install Ubuntu 16.04 or 14.04 and CUDA 8 and 7.5 for NVIDIA Pascal GPU"

I was configuring a laptop to run GPU accelerated molecular dynamics simulations as a demo at the Spring 2016 ACS meeting. This laptop is to be used for running simulations directly and as a visualization front end for some larger machines. The laptop is "bleeding edge", a monster, with an Intel Skylake i7 6700K, 32GB mem, m.2 storage, and a 4K display! That hardware can be a challenge for Linux so I decided to go "bleeding edge" with the OS install too. I was not optimistic but miraculously it all worked including the needed NVIDIA CUDA setup!

First things first. No one endorses, recommends, suggests or condones doing this setup. Including myself, Puget Systems, NVIDIA and all other sane persons.  If that is completely understood then read on to see what I had to do to get this to work.  Note: also, that this is not a guide! If you don't understand what I did then don't try it! 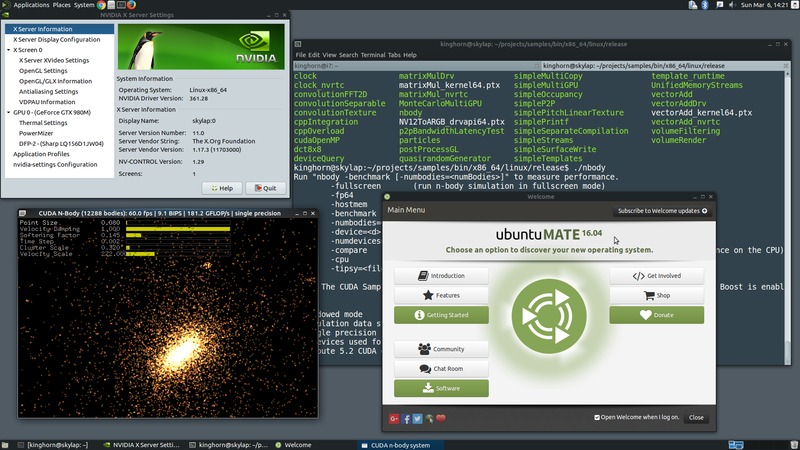 I've done this "Ubuntu 16.04 beta plus NVIDIA CUDA" setup on two systems so far, a laptop and a Peak Mini.

Note: I used the MATE desktop spin because Unity and Gnome3 failed to work on the laptop (as usual, the 3D compositors are very problematic with the NVIDIA drivers). Also, MATE works very well with remote desktops like X2go. … and MATE is my favorite Linux desktop at the moment!

Note: The most recent Ubuntu supported for CUDA is 15.04 so installing on 16.04 beta is stretching things a bit! The main limitation is that version 5 gcc compilers are not supported yet.

You have to modify a cuda header file to enable this gcc version to work.

These are wonderful molecular dynamics tools from the great folks at the Theoretical  and Computational Biophysics Group at UIUC.

The basic OS install was trouble free on both systems. I used the live install image ubuntu-mate-16.04-beta1-desktop-amd64.iso. You could also try using the ISO image from  Ubuntu MATE 16.04 (Xenial Xerus) Daily Build. The Lubuntu and Xubuntu spins may also work but I would recommend to stay away from Unity and Gnome 3 unless you are feeling adventurous.

After the basic install do an "apt-get update" and "upgrade", reboot, and then go to "Software & Updates" –> "Additional Drivers"  and install the latest tested NVIDIA driver. I didn't have any trouble with this using the MATE spin. After a reboot open the "nvidia-settings" app and check that everything is as expected. Configure you system to taste as you would for any install.

There are lots of dependencies for a CUDA install. To make life easier I generated a dependency list from another system that was running 15.04.

The "-s" flag for apt-get will show the details of what would be done for an install including dumping the dependency list.

In the output below I have removed all of the deb files that would be in the CUDA repo itself and just left dependencies that would get pulled in from the standard Ubuntu repos.

You can "sudo apt-get install" the above list and that should get most or all of the dependencies. There is a possibility that there will still be missing debs. For example I added the last three entries to the list when I discovered that they were missing on my new 16.04 install after the others were installed. That's is probably because they were already installed on the 15.04 system it ran "apt-get -s install cuda" on i.e. they didn't come up as needed dependencies because they were already installed.

The "–override" is needed so you don't get the error, "Toolkit:  Installation Failed. Using unsupported Compiler."

Be sure to not install the NVIDIA driver that is in the .run file since you already have a more up to date version installed. Here's the command history with the long EULA text cut out.

Set up the  environment and libs for the install

Force it to work with gcc 5

Fix/break the header file that doesn't want to let us use gcc > 4.8. All we are going to do is comment out (//) the error line that drops you out of a build.

You can now copy the CUDA sample to your testing directory and build some code.

The "Makefile" in the samples directory does not pick up all of the paths for this install and I haven't fix all of the problems, just hacked around a few of them. One change I made was in the file "common/findgllib.mk

Another common Ubuntu problem is needing to specify  GLPATH=/usr/lib on the make line.

That will build a lot of the sample code. I only got one error in the output,

That one was strange since the lib is there and other libs around it link OK?? … still some bugs.

The "Makefile" did not follow all of the directories for some reason so a bunch of sample were missed. I was able to cd into the individual directories and rum make to get them to build. In total I had 145 of the samples build without trouble. That is nearly all of them!

Here's the output from the nbody benchmark run on the laptop (the openGL rendering works fine too),

To finish off here's a snapshot of the laptop running a molecular dynamics simulation on the "Satellite Tobacco Mosaic Virus" with NAMD and displaying the running simulation to a 4K monitor in real time using VMD.  Awesome! 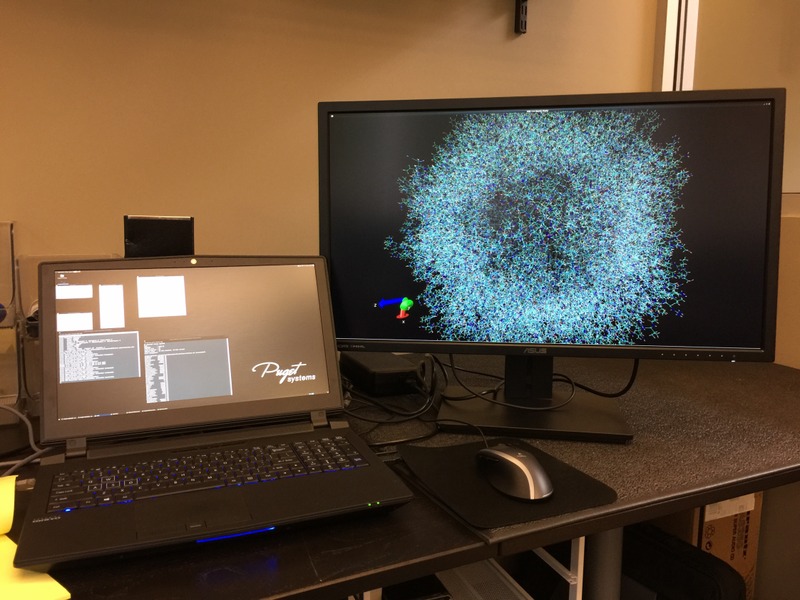