Intel released BIOS version EDADL579.0053 on 7/19/2022 which does NOT show the drive speed throttling symptoms. We recommend updating to this version as a solution is your NUC is experiencing the drive performance issues mentioned in this article.

Recently, we have encountered a problem on the Intel NUC12DCMi9, also known as the Dragon Canyon NUC, that involves severe reduction in read and write disk speed performance. While the latest Intel NUC units have been around since Q1 of 2022, this issue came to light on systems going through our production process over the last couple of weeks. This article will cover our findings, workarounds, and will be used as a noticeboard for more permanent fixes as they are released.

NVME M.2 drives installed in the front left slot and the rear slot have their read and write speeds reduced to 1/3 of their expected performance.

Slots affected highlighted in red below 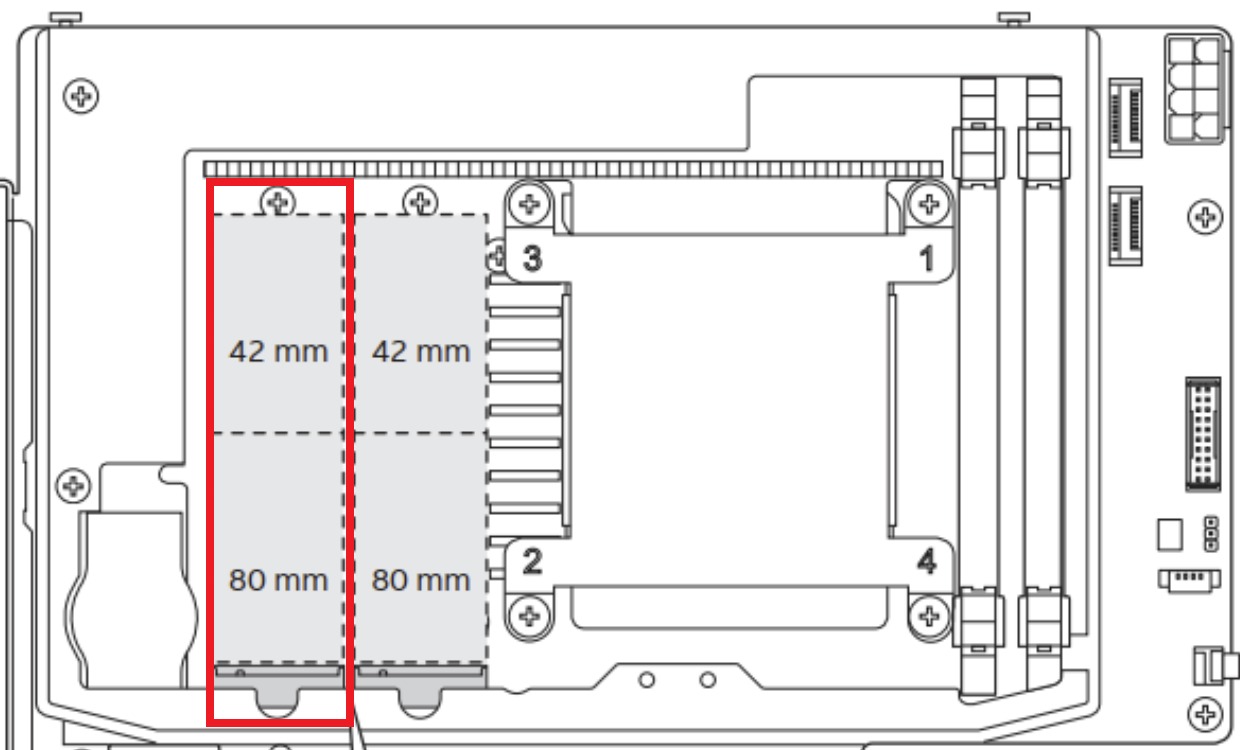 Additionally, and something that has complicated a solution, if your NUC is on a BIOS version prior to EDADL579.0052, there is a good chance the problematic BIOS version will be rolled out as part of Windows updates. We identified Intel(R) Client Systems BIOS - Firmware - 6.8086.3020.52 as part of recent Windows update packages to automatically update the firmware and create the storage performance bug.

There are two main steps in providing a workaround for the mentioned performance bug: moving to an earlier BIOS version (specifically 0046), and avoiding the BIOS revision in a future update. There are several ways to go about this but we've included a couple of recommended routes.

Earlier versions, specifically 0046, are not prone to the drive speed issues and we haven’t encountered other detrimental performance problems requiring a later BIOS version.

Manually flash BIOS back to EDADL579.0046. For more information on different methods for changing BIOS versions, consult the Intel NUC BIOS update support page. In our Production department, we generally apply BIOS updates using the F7 flash screen during POST (second option in the table) but the Windows based utility (first option in the table) is also adequate and is generally easier to apply.

Pausing Windows updates. After reverting to an earlier BIOS version the next piece to the workaround is avoiding the update in the future. One method to achieve this is to simply pause Windows updates for several weeks.

Use PowerShell to block specific updates. Note that pausing all updates would also include security updates. If you are required to keep current updates applied, you could be better off manually choosing your updates, avoiding any Intel NUC firmware related patches for the time being.

You can manually hide the Intel NUC firmware update by running the following PowerShell commands in administrative mode, affirming the warnings with y when prompted:

We are currently in the process of coordinating with Intel on a BIOS patch, or as temporary means, removing the troublesome BIOS 0052 from being auto rolled out with Windows updates. We will update this article with permanent fixes as they are released. In the meantime, we're hoping to spread awareness and provide workarounds so NUC users can continue their work without interruptions of severe drive performance loss.