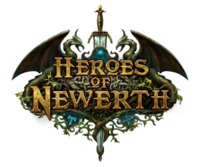 Heroes of Newerth (HoN) is a free-to-play Action Real-Time Strategy (ARTS)-style game loosely modeled after the classic Defense of the Ancients mod for Warcraft III, and it's currently one of my favorite games. ARTS games have a top-down view similar to an RTS (eg. Age of Empires, Warcraft, Starcraft) but emphasize single-unit development and de-emphasize base building. Each person starts with control of a single unit or 'hero', and often controls only that unit for the entirety of the game. Teams compete in 3v3 or 5v5 games usually lasting 30-60 minutes depending on game mode. Except for aesthetic things like hero skins and your player ranking information, nothing from previous games carries over into the current game, so someone who's played 600 games has no advantage over a new player, other than the obvious. The gameplay is heavy on micromanagement and fast-click reaction times, but what really keeps me interested in HoN is the team cooperation element. Team play is very important in this game, and a team with a well co-ordinated strategy (or at least a team able to communicate and willing to cooperate) can make up for a lack of fast reaction times. 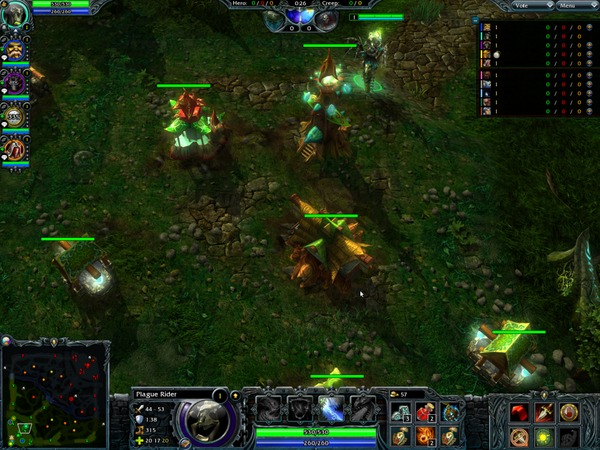 Heroes of Newerth is a game that could theoretically be played 1v1 with each player controlling all 5 members of a team. In fact, a single very good player simultaneously controlling all the heroes on a team could probably beat a team of five newbies. What I mean to explain is that the game play is simple enough (not absolutely simple, but simple enough) that the team play element gets emphasized to a great extent. If you're not familiar with the ARTS style of games, think of a game of Starcraft, except each unit you build is controlled by a real person. Imagine how hard it would be to execute a complex strategy that not everyone on your team was familiar with, and you might get an idea of what this type of game is like. The tension is always high because only one team ultimately wins each (potentially 60-minute long) game, and because a single wrong move or excellent play can have important consequences.

One of the nicest things about HoN is it has Mac, Windows, and Linux native versions. This is very convenient for me since I primarily run the Ubuntu Linux operating system. The game is not particularly demanding in terms of hardware requirements. My system generally runs it well at maximum settings on a single 1600×1200 resolution monitor, although I do have to be careful to stop any resource-intensive background tasks, such as file indexing, or media library rescans before playing. For reference, my system specs are as follows: Intel Core i5 model 650 CPU on H55 chipset, 16GB DDR3-1333 RAM, nVidia GeForce GTX 550 Ti graphics, Intel X25-M 160GB SSD primary storage.