One of my favorite scenes from the film, The Shawshank Redemption,  is when Andy and Red share stories of the places each would visit if set free. The scene ends with Andy stating, mostly to himself, “Get busy living or get busy clicking”.

So I might be off by a word, but I have no doubt that’s what Andy would have said if he had spent the last three weeks playing Farmville. If you enjoy clicking around the screen to do everything from plowing a field to milking a cow to harvesting eggs from a chicken this is your game.

Continuing with our series of “favorite” games here at Puget Systems, I decided to jot down a few of the experiences I’ve had while perfecting my farming skills.

Unless you’ve been living under an eggplant for a few years, you no doubt have heard about Zynga’s popular casual farming simulation game. Even if you haven’t played Farmville you’ve probably had your Facebook timeline inundated with requests for such items as gopher treats. Or a spare hat for a friend’s party goat. I had no idea goats partied this hard. 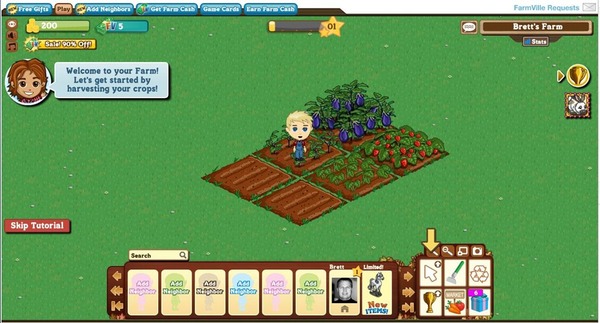 My eggplant grew best when planted next to strawberries

In short, each player starts out with a plot of land that must be plowed, seeded, and harvested. The successful farmer’s harvest will have brought in more money than it cost to plow and seed his land. Fledgling farmers like myself only have access to a few seeds initially, but what I lacked in variety, I made up for by specializing in strawberry and cantaloupe growing. No need to try to complete with the local grocer. If cantaloupe or strawberries are on your list, my fruit stand is open for business!

Each seed takes time to grow which means you’ve got to be on your toes. The last picture below shows the consequence of taking in back-to-back-to-back episodes of Overhaulin’ while I had a crop of cantaloupe on the vine. Not only did I lose the entire crop, but I had to pay to plow the ground before I could start over. Slacker farmers need not apply.

You know that internal clock that wakes you just before your alarm goes off? After a week of playing Farmville my body instinctively headed towards my computer in a race against the clock to harvest my strawberries. Doing this every 4 hours became exhausting so I began planting cantaloupe giving myself a full 12 hours to recover.

Occasionally I was presented with animals that don’t exist (pink unicorns) or that have been extinct for many years. Such was the case when I tried to share a Brachiosaurus with my friends in hopes of landing one for myself. Such game mechanics come into play often in Farmville where you’re promised an item – in this case, a Brachiosaurus – if I can convince one of my friends to accept one. Although my little pre-historic sauropod looks friendly enough, not a single friend took me up on the offer. I do appreciate the kind soul who stopped by to fertilize my mustard seeds. Kudos to you, bro.

That brings up one of the main draws to the game: playing with others. I decided to learn as much as I could on my own without begging my Facebook friends for fertilizer or fuel which would have made life on the farm a lot more enjoyable. Farmville is very clever in that it gives you nearly all the resources you need to complete a task, but not quite. For example, after successfully harvesting a number of crops, I earned enough gold coins to purchase a pink tractor to plow four sections of land at time, saving my poor fingers from more clicking. But I quickly learned tractors go through fuel at an alarming rate, leaving me to either purchase more fuel with real money or beg my friends for fuel. 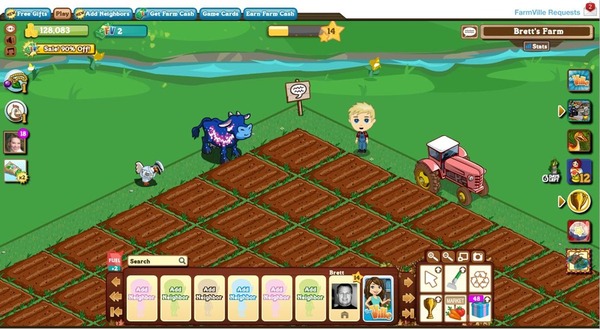 After three weeks I’ve earned enough experience to reach level 21, or what Farmville refers to as the Rockstar Farmer which felt like a demotion from Professor of Agriculture, the title I obtained at level 15. Each level opens up more items to purchase. And, as your farm grows, your fingers and your mouse will thank you that you're able to purchase tractors, harvesters and even farm hands to make life on the farm more enjoyable. When you begin, you’ll have to do everything yourself and that means a lot of clicking around your farm to perform basic tasks such as planting, plowing and milking.

Although I’d never played Farmville up until a few weeks ago, I had heard a lot about it, and wondered why it was so popular. I suspect that the constant dangling of the proverbial carrot plays a large role in why players return to the game day after day. Also, animals such as my Milky Way cow and Captain Chicken act alive. I understand they are merely pixels on the screen, but the manner in which they move and sway and respond drives home that I’m the person responsible for their quality of life.

I can’t believe I just wrote that.

Anyway, Farmville is a game that’s accessible to nearly anyone who can click a mouse. The large fonts, bright colors and animations bring this virtual world to life without the hassles of managing a real farm. For example, not once did the game ask me to shovel manure or clean the pig pen. In short, it provides all the enjoyable aspects of owning a farm without all the unsavory, character building tasks we associate with a past era before the automated milking machine was invented.

Farmville is accessible to nearly anyone who owns a computer and can use a mouse. Here’s all you need:

The actual hardware requirements are quite low. If your computer can run Flash, you can play Farmville. Within the game itself, you can toggle between a high and low graphics quality setting. Toggle over to the low setting and you’ll get a feel for what it’s like to play Minecraft.

Of course, here at Puget Systems we’d rather bale hay on a mid afternoon in August than game on a system that barely meets the minimum hardware requirements. For this reason, I came up with the chart below to help you access your CPU needs. I call it the Cow to Core Optimizer, and I hope you find it as useful as I did. 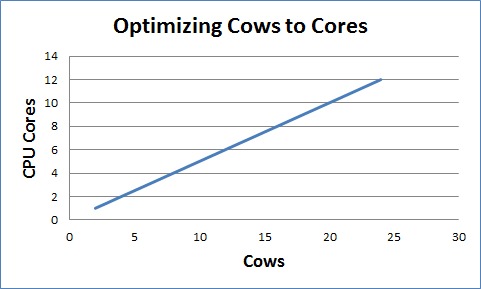 For the casual farmer planning to raise a couple of cows, a computer with the dual-core i3 would suffice. But if you’re going into the dairy business which requires dozens of cows, you’ll be best served with a workstation class computer like the Puget Systems Genesis which sports dual processors and up to 16 cores! I believe it was John Deere who said, “The more cores, the happier the cows”, but don’t hold me to that.

When I decided to try Farmville, I didn’t know what to expect. I figured I’d have a thriving farm up and running within a few hours giving me enough material to write this review. But I quickly got sucked in. I found myself waking up early to harvest my crops and see how many eggs my chickens had laid. More than once, I saved a crop by logging in to my account at work and firing up the gas hogging harvester machine before my cantaloupe rotted on the vine.

But I knew it was time to take a break when a co-worker overheard me explain that I’d recently petted my cows to keep them happy.