"My report is on the tarantula hawk. Can you read it and look for mistakes?"

My son handed me a sheet of well-worn paper with thick lines and plenty of space for a fourth grader to write. I grabbed a red marker and began reading about the odd tarantula hunting wasp.

My initial reaction was to ask my son why he didn't write his report in Google Docs. I've watched him do math problems on my computer so why not this report? 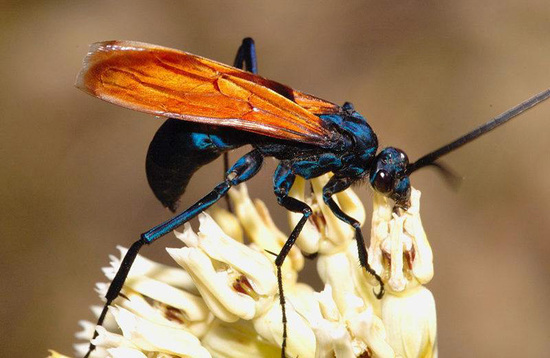 I asked him to join me at the kitchen table as I read through his report and began making a few edits. He watched me capitalize a few words and add or remove punctuation as needed.

We talked about pronouns, and I occasionally asked him to help make out a word. "Oregans" should be organs. We also discussed the differences among their, there and they're. It was as confusing to him as it was to me at his age.

Over the next 25 minutes, we made it through half a dozen paragraphs to the end of his report. Each paragraph now included a few edits in bright red marker. Some sentences were crossed out and replaced with other words. It was messy, but each edit was the source of some back and forth between me and my son.

"I'll rewrite it tomorrow so it looks good for my teacher", he told me as he ran off to bed.

I took his report and placed it in his binder so he won't forget it tomorrow as he rushes off to school on his blue scooter.

As I look back on the night, I'm glad he wrote it by hand. It would have been easier to make the edits in Google Docs, but it's unlikely we'd have discussed what we did. Sitting the dining table with my son is a better experience than asking him to look over my shoulder at my computer.

Sometimes the experience of holding a book or a report in your hand beats the convenience of the digital version.

Tonight, I believe my son learned a few tips on report writing. And I learned that the tarantula hawk paralyzes its prey before laying an egg inside the spider's abdomen while it's still alive.

I also learned how to spell abdomen.