NVIDIA's CEO, Jen-Hsun Huang, dropped a bit of a bombshell at the NIPS conference yesterday: the launch – and immediate availability – of the next graphics card in NVIDIA's Titan series. It is called the Titan V, with V referring to the new Volta architecture it is based on. Titan naming has been all over in the past, so don't try to make any sense of it alphabetically. After all, V comes before X and Z… even those this card is newer than the Titans which used those letters.

What is most interesting about this new Titan V, though, is where it is aimed. In the past, Titan cards have toed the line between mainstream and professional graphics realms. Some Titans have been advertised as gaming cards, some have not. Some Titans bore the GeForce branding of NVIDIA's mainstream graphics cards, more recent models have not. The very first Titans had great compute performance, which was lost on some of the later models, but has returned according to the specs NVIDIA released last night. 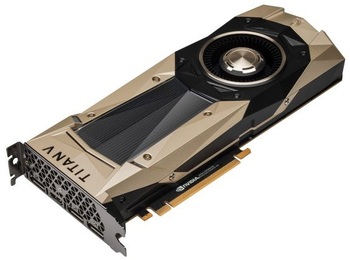 So what does that mean for the new Titan V's performance? And what does the new Volta architecture bring to the table? We will be getting a pair of Titan Vs in the near future for testing, at which point we will be able to answer these questions more definitively, but for now here is what we can surmise from the card's specs and what is known about Volta and the GV100 chip (which is also used in the Tesla V100):

So what does all of that mean for computer users? It depends on what you are doing. For gamers, not much. The upper-end GeForce 1070 / 1080 series cards, or even a Titan Xp, will give you much better performance per dollar… even if the Titan V might technically be a little faster overall (we'll have to wait till gaming sites get their hands on it to know for sure). For graphics professionals, running GPU-accelerated programs like Premiere Pro, Resolve, OctaneRender, and the like, also not a lot. We will be testing some of those programs with the Titan V, but from the specs alone I don't expect it to be able to justify its high price tag for most content creators.

But for developers working on machine learning, deep learning, and AI? This is where the Titan V will shine!

It provides similar specs / performance to the Tesla V100 which costs more than three times as much, while also having standard HDMI and DisplayPort outputs that you need in a workstation (as opposed to a headless server, where most Teslas reside). It also has a high quality heatsink and fan for cooling, another thing that is missing from the Tesla cards that require specialized cooling from the system that houses them. Being able to get this sort of horsepower for the full range of half, single, and double precision calculations in a tower workstation or even a compact desktop will be great for folks working in this space. I am excited to see what our own Dr. Don Kinghorn finds when he gets his hands on a Titan V! Check out his HPC Blog on our website to see content from him about it in the coming weeks.