I attended high school during the mid-80s. Around this period, Apple had just released the Macintosh and IBM was beginning to blitz the world with their PC Jr. Both models were still too expensive for my parents to purchase, so my only access to a computer was at my school's computer lab, where I took a class in BASIC.

It wasn't until my senior year that more teachers began to require reports to be typed. This was the first time I was forced to use a computer outside of school. My friend's family had a PC running WordPerfect for DOS. His reports looked far more professional than the rest of us using White-Out to cover up our mistakes on a typewriter. One time my friend showed me "Print Preview" in Word Perfect, and it was magical. Plus, he could spell-check his reports while the rest of us relied on our proofreading parents to catch our mistakes.

The computer gave my friend an advantage. Not only did the computer make his work look better than ours, but he was learning valuable skills. I was learning BASIC for one hour a day. My friend was playing around with WordPerfect and Quattro Pro for hours at home. 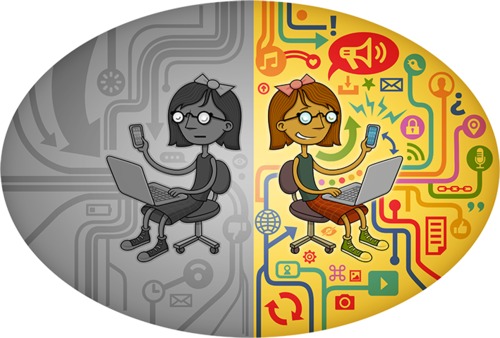 Each generation has had its version of the digital divide. Before the 20th century, the divide referred primarily to the division between those with and without telephone access. Down the road, television would fill a similar role. And it wasn't that long ago that we spoke in terms of those who had broadband access to the internet and those who did not.

My four children have collectively attended eight different schools in two different states. The difference between schools, even in the same state, is substantial. One school might have two old Dell computers in the library. Another school might have two labs full of new PCs, laptops, and tablets. Some schools place the responsibility of learning how to use Word or Excell or Google Docs on the parents, while other schools integrate technology into the curriculum. I'm sure both sides have their reasons.

This past year, I was happy to hear my son wouldn't have to take another keyboarding class. Instead, he learned how to use CAD and 3D printers. He loved the class. I wish all of my kids had been given the same opportunities when they were his age.

I've also witnessed the flip side of this coin where kids are handed phones or tablets with little supervision or restrictions. I've heard of teens who become so addicted to their phones that it reeks havoc on their ability to concentrate on school. My spouse and I put a lot of trust in our children until they break it. I'm more likely to take away their gadgets for a time instead of monitoring their devices with devices and software. Am I making a wise decision? I don't know yet.

As a parent to children with access to a lot of technology at home, I'm constantly trying to find a balance. I want to kids to have access to technology that both educates and entertains. What's worked best so far is talking to them about proper and improper usage so they understand what happens when they break the trust. Next time one of my kids acts up, I'll make them use DOS for a month.