Read this article at https://www.pugetsystems.com/guides/1959

Written on November 5, 2020 by Matt Bach
Share:
Table of Contents

Over the last few years, AMD has been making great strides with their Ryzen and Threadripper processors, often matching - or beating - the performance from similarly priced Intel options. In fact, ever since AMD launched their Ryzen 3000-series processors last year, AMD and Intel have been neck-in-neck in After Effects performance, making either brand a great choice. 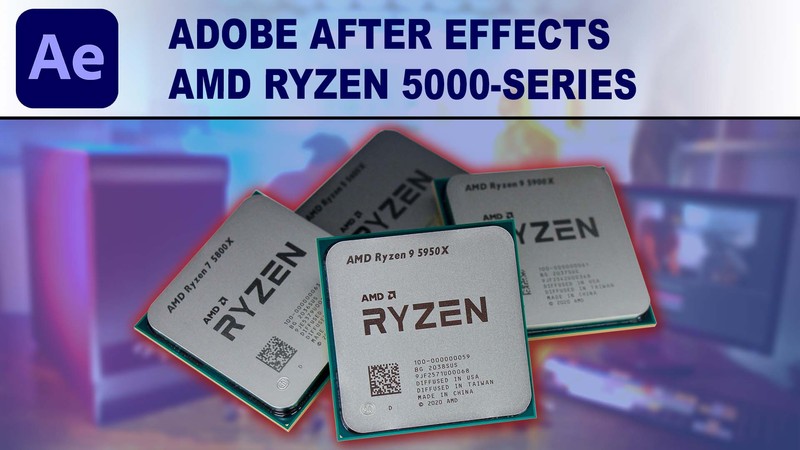 Another factor that has changed recently is that the Gigabyte B550 Vision D motherboard - with fully certified Thunderbolt support - has launched and passed our internal qualification process. One of the reasons we tended to use the Intel 10th Gen CPUs over Ryzen when the performance was similar was because only Intel platforms had passed our qualification process for Thunderbolt. With this motherboard, Thunderbolt support is no longer as much of a factor when choosing between Intel 10th Gen and AMD Ryzen CPUs in our workstations.

Keep in mind that the benchmark results in this article are strictly for After Effects and that performance will vary widely in different applications. If your workflow includes other software packages (we have similar articles for Premiere Pro, Lightroom Classic, and Photoshop), you need to consider how the system will perform in those applications as well. Be sure to check our list of Hardware Articles to keep up to date on how all of these software packages - and more - perform with the latest CPUs.

What about the 3700x can we see the results for it in these tests?

We didn't include that CPU since there wasn't an XT model, but there are some uploads to our benchmark database that will give you an idea of performance: https://www.pugetsystems.co... . Always hard to say with public results (don't know if it is overclocked, if antivirus is running, etc), but I would guess the 3700X would score about 1050 point overall - or right in between the 3600XT and 3800XT

Thanks for this very helpful list, i didn't know about it. I'm about to buy a new cpu mainly for Ae

since the 5600x is closer to 3700x in these tests, which one do you recommend buying?

I would probably go with the 5600X if it was me. I don't think there will be much of a difference day-to-day, but if the price is similar (and you can find supply), you might as well

What suprises me is that 5600X had similar or better results than 5950x in some of the tests..
Watching the detailed report, seems the most difference in final score between 5600x and 5950x comes from C4D tests (which I guess are multithreaded).

Yep, you got it exactly right. CPUs these days are really interesting because the single threaded performance really isn't all that much different between CPUs of the same architecture/generation. The 5600X is technically a hair slower for single threaded, but I bet the simpler cache setup helps the 5600X somewhat. Since the new design is to have every 8 cores shared cache, all the cores are using the same cache on the 5600X, while on the 5950X, you have two sets of cache, which could result in some cores having to access data from the other cache.

Yeah thanks for confirmation. For "pure 2d" animators there is basically no reason to go further than 5600x or 5800x for AE,PS,AI work in that case until (AND IF) Adobe makes more multi-threaded applications.

Adobe has been hinting at improved multi-threading in AE for a while now (I remember it being show in a session during the 2019 Adobe Max), so I'm sure it is coming. The question is just when, and how many cores will it be able to effectively utilize.

Still waiting, for years now :)) Anyway thanks for you replies and for the great Article!

I love using these articles for practicing speed reading, since they are interesting and easy to read, keep up the good work! :)

With the AMD 5000 series out of stock and will be for the foreseeable future, would you recommend getting the 3900XT over waiting 2+ months for the 5900X to be in stock? I was purely convinced to just get the 3900XT after reading the Premiere Pro and DaVinci articles. However after reading this AE article, I’m a bit doubtful now. That 16% increase in performance compared to the previous generation seems significant to me. Perhaps I wouldn’t notice the difference in real life? I’m doing a new build as I feel like the i7 6700 prebuilt I have is in need of an upgrade.

Either one is going to be a big upgrade compared to the i7 6700, but the extra performance in Ae is definitely going to be noticeable. Stock has actually been OK for us through disti and we have been able to fill all the orders so far, but I'm not sure when it is going to get better for consumers to by the 5900X as a part.