Skip to content
Always look at the date when you read an article. Some of the content in this article is most likely out of date, as it was written on January 5, 2021. For newer information, see our more recent articles.

While gaming is almost always a major focus during these GPU launches, professional applications like Premiere Pro are becoming more and more important. In fact, if you view the product page for the 6900 XT, you will note that they are starting to include Content Creation performance from benchmarks like our very own "PugetBench for Premiere Pro"! 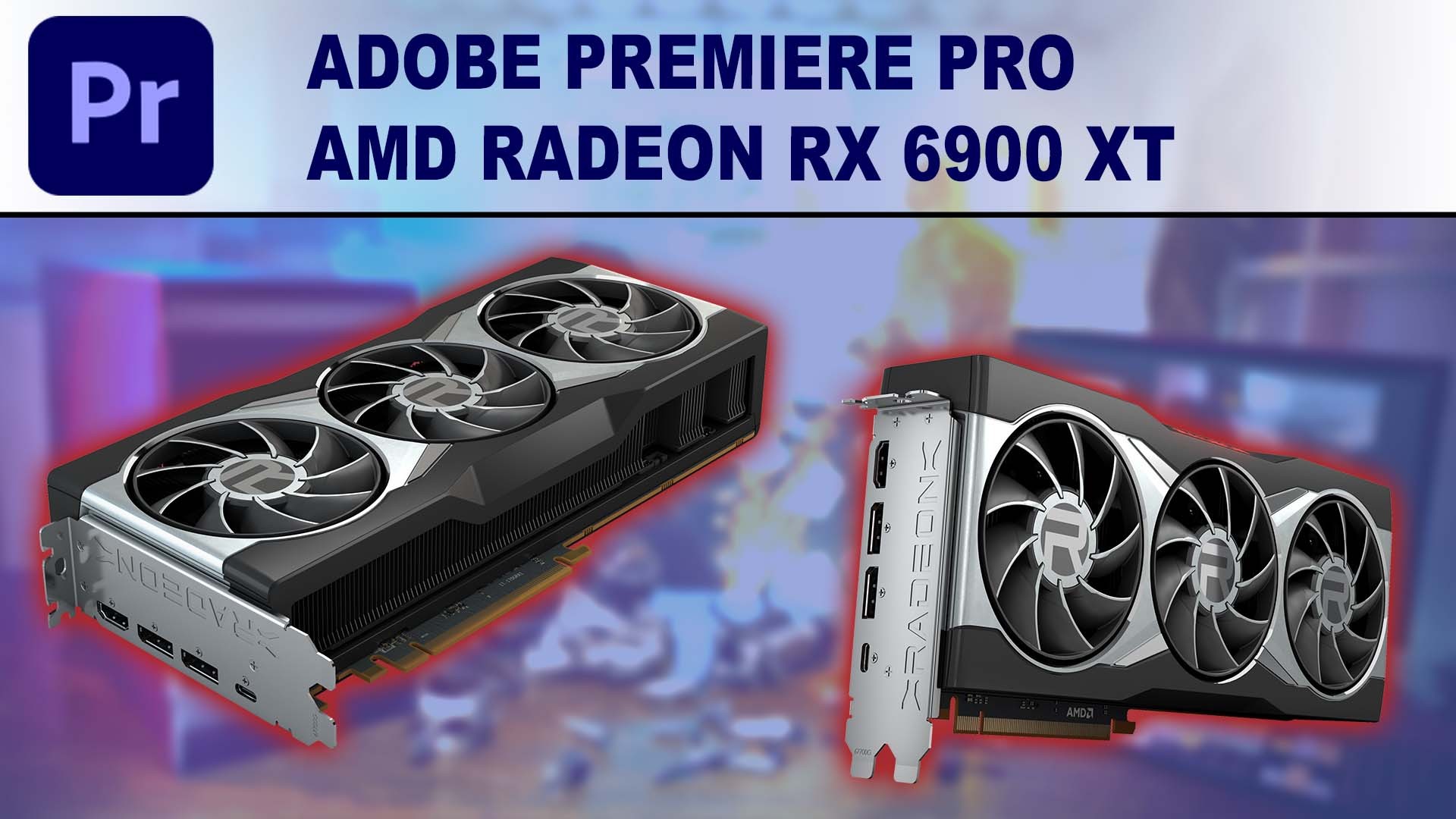 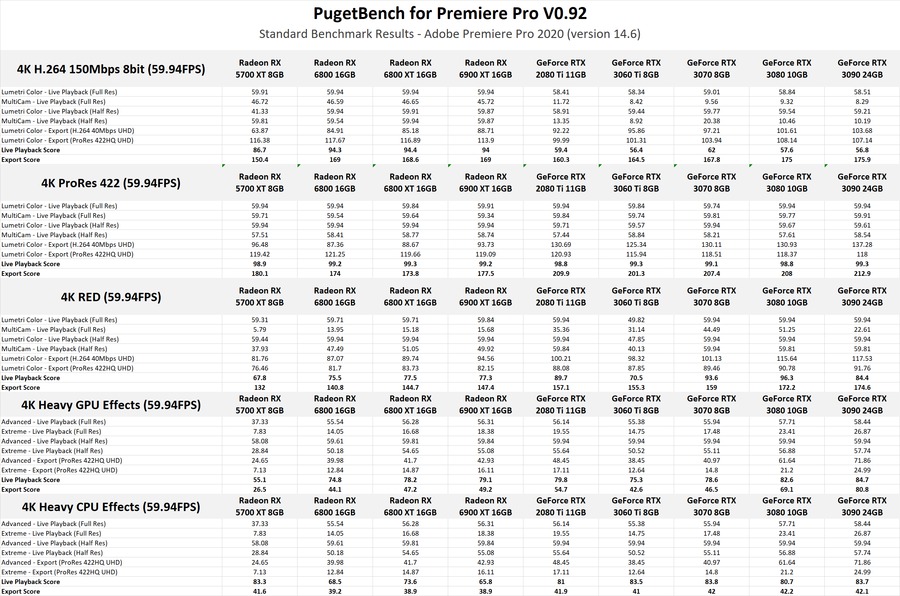 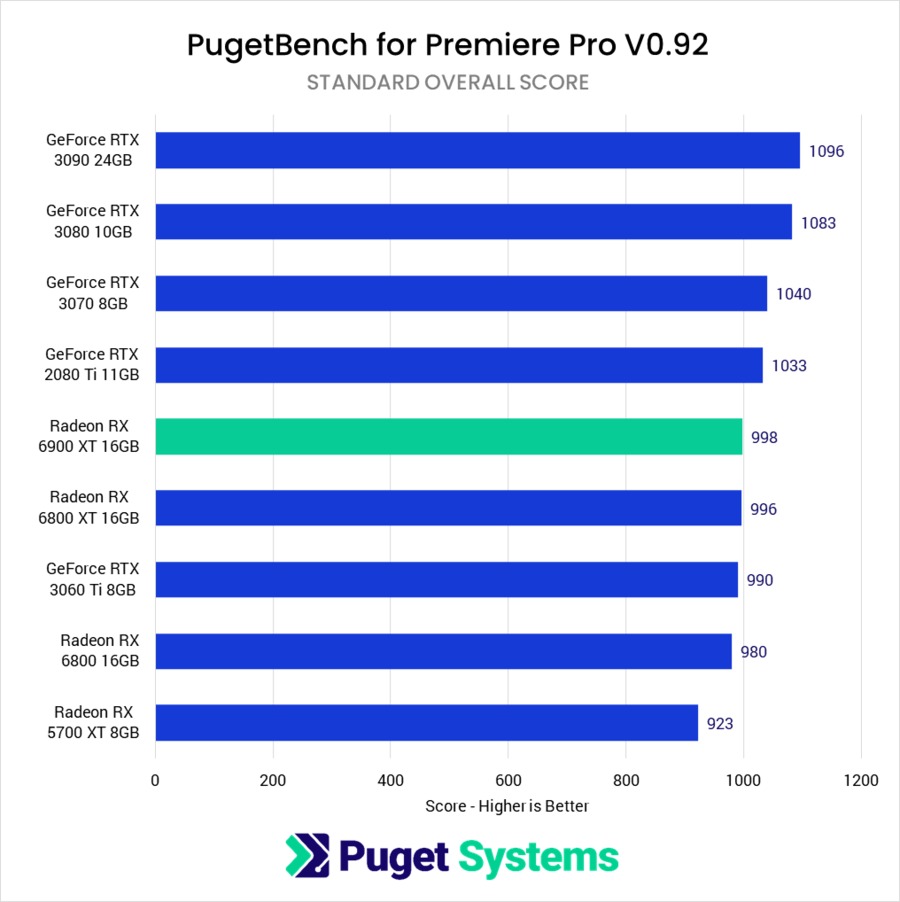 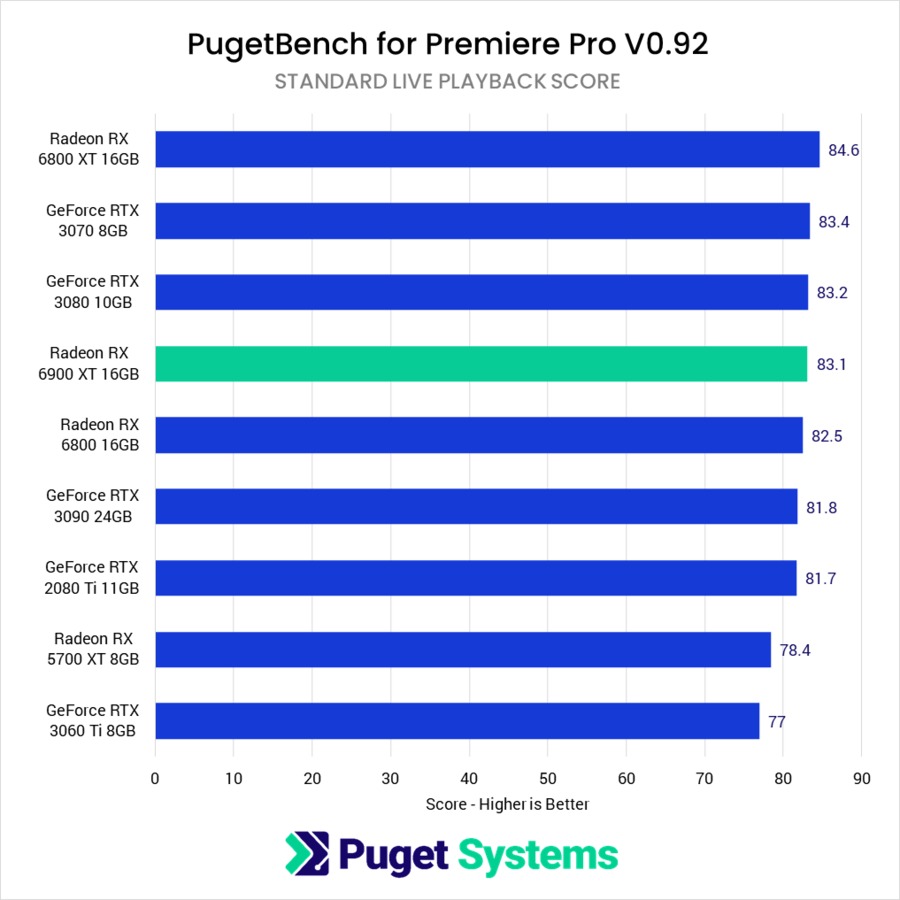 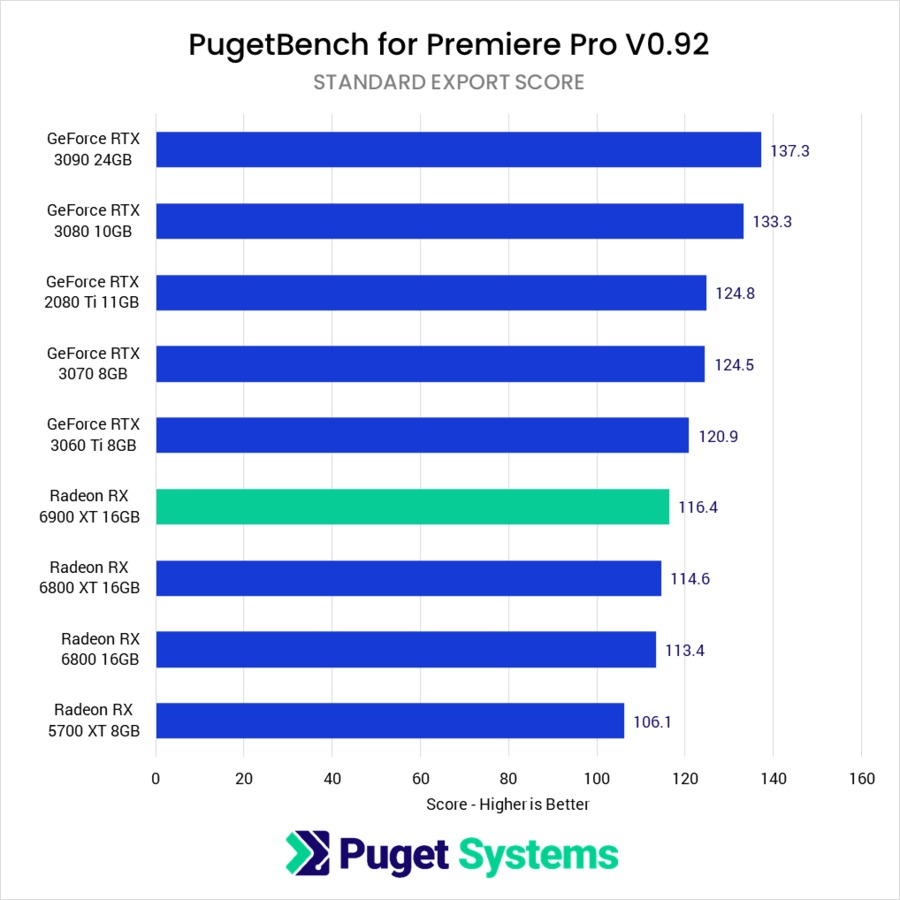 Looking at the overall performance, it is interesting to see that the AMD Radeon RX 6900 XT 16GB does not score much higher than either the Radeon 6800 or 6800 XT. In fact, the performance is only about on par with the GeForce RTX 3060 Ti or about 8% slower than the RTX 3080.

However, keep in mind that the scores shown in the charts above include quite a few tests that are heavily CPU limited. Playing or exporting ProRes footage does not utilize the GPU, and neither does our dedicated CPU Effects test. This is still a fairly good indication of what the average Premiere Pro user may experience overall, but we can dive into specific situations where a more powerful GPU should net you more significant performance gains. 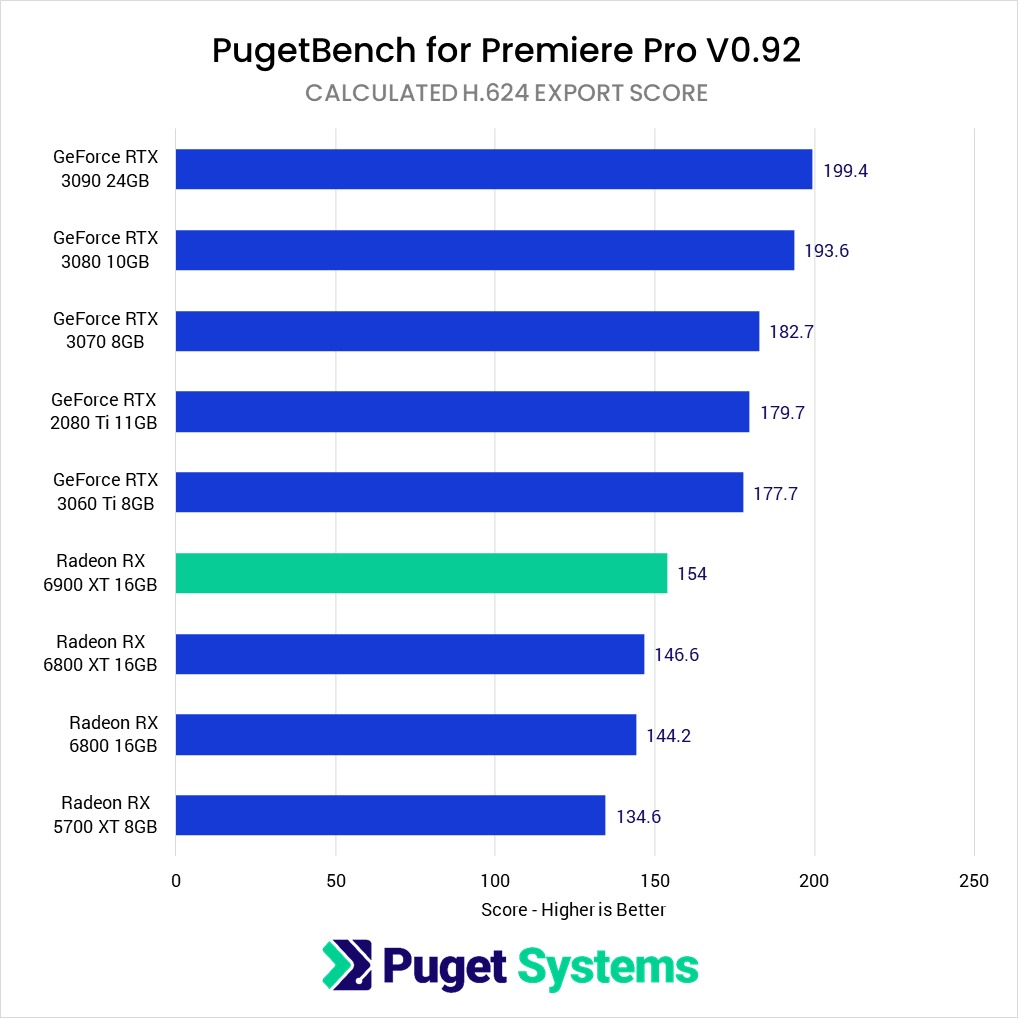 Here, NVIDIA tends to have a solid performance advantage, which results in even the lowest-end NVIDIA GPU we tested (the RTX 3060 Ti) out-performing the Radeon 6900 XT by a solid 15%. The performance difference is even larger if you compare it to the RTX 3080 which is just over 25% faster than the Radeon 6900 XT when exporting to H.264. 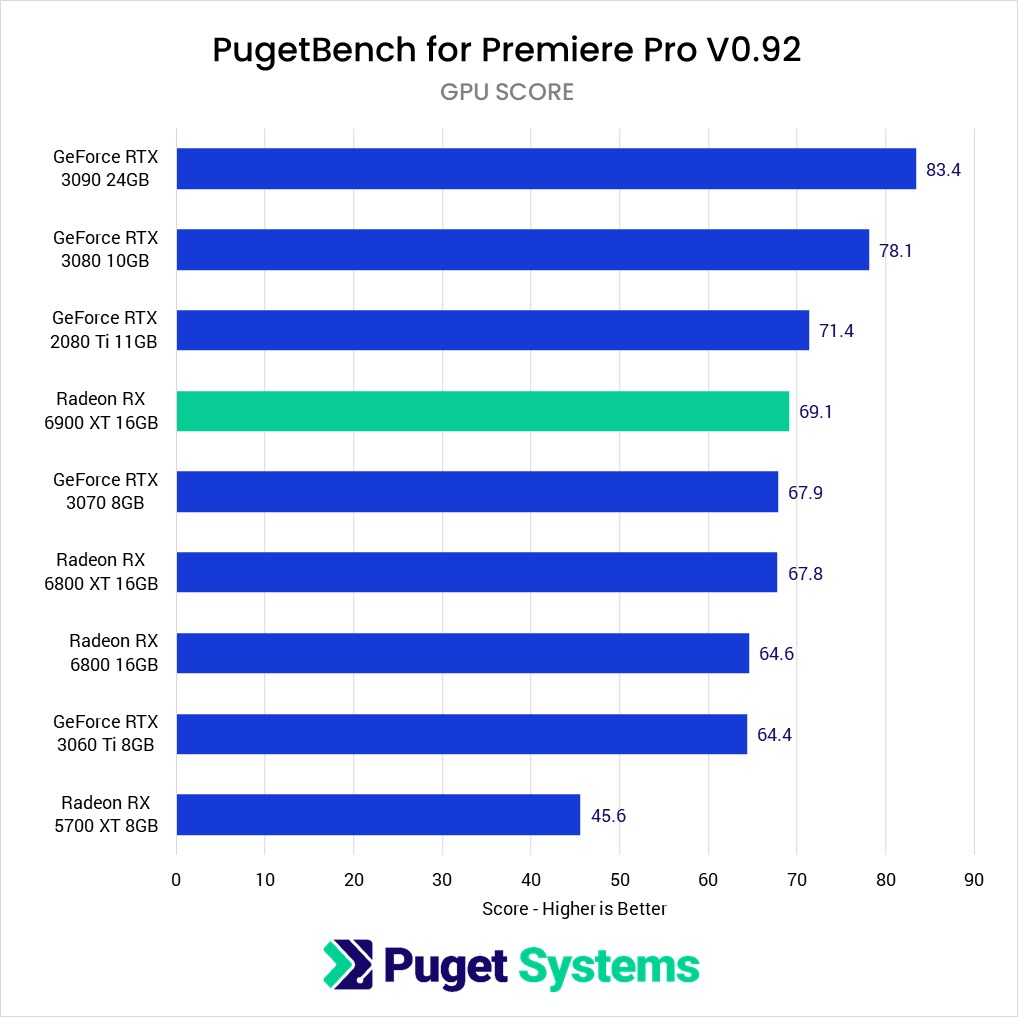 How well does the AMD Radeon RX 6900 XT perform in Premiere Pro?

If you regularly export to H.264 or HEVC codecs using hardware encoding, the performance difference is even more in NVIDIA's favor. For exporting, even the RTX 3060 Ti beats the Radeon 6900 XT by a solid 15% while the RTX 3080 is a hair over 25% faster. All this means is that no matter how you slice it, NVIDIA cards are simply faster for Premiere Pro right now.

The Radeon 6000 series do offer the advantage of being able to get 16GB of VRAM at a relatively affordable price, although that amount of VRAM is typically only going to be a factor if you are working with 8K timelines in Premiere Pro. And with those kinds of projects, the RTX 3080 10GB is usually going to a better choice since it gives you enough VRAM for 8K editing while also being significantly faster in Premiere Pro than the Radeon 6800/6900 cards.