Written on November 5, 2020 by William George
Share:
Table of Contents

The fantastic single-threaded performance of these new Ryzen processors will make them excellent for working with modeling, animation, and physics in Cinema 4D - while also offering solid rendering speeds, especially considering their price points. 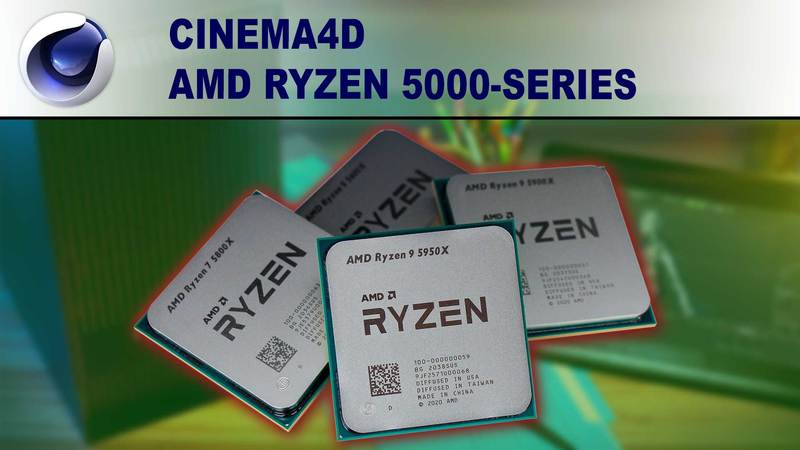 For this article, we are looking at how the new AMD Ryzen 5000 Series processors compare to a host of other currently-available models: AMD's previous Ryzen 3000 Series, their high-end desktop (HEDT) Threadrippers, and both Intel's mainstream Core and HEDT Core X lines. The focus of this article is primarily on rendering performance in Cinema 4D, but we will also look at single-threaded performance since it is more indicative of how modeling, animation, and physics behave in the viewport. Thankfully, Maxon provides a free, public benchmark in the form of Cinebench - and we run the two most recent revisions to gather our data. More info about those tools and how we use them are available in the Test Methodology section.

*Pre-launch BIOS only has AGESA 1.0.8, but AMD says AGESA 1.1.0 should come soon - which may further improve performance

The primary focus of Cinebench is on measuring system performance using the default CPU-based renderer in Cinema 4D. Normally, all cores / threads a CPU has are utilized - but there is an option to run the test on a single core as well. To try and paint a more complete picture of performance, we have run both multi- and single-core modes, and in both the latest Cinebench R20 as well as the older R15 release. The multi-core results will be shown first, as they are indicative of what real-world rendering performance will be like with each of these processors. Below that, the single-core results will give a rough indication of how these CPUs would fare when working with modeling, animation, and physics in the viewport.

Results are listed from fastest to slowest (top to bottom), and split up by multi- versus single-threaded test modes.

The big increase in instructions per clock that AMD has touted for these processors is most apparent in the single-threaded performance charts. The Ryzen 9 5950X is a full 20% faster with just one active core than the 3950X was in Cinebench R20, and the other three new 5000 Series models see gains of 15-20% over the previous generation. In the older R15 version of the test, the gains are even higher at 20-30%. Not only do the new Ryzen models beat their predecessors, but they also surpass all of the Intel processors we tested. This isn't a perfect test of viewport behavior, but it does show that AMD has outpaced Intel for single-threaded performance - and it is safe to assume that will translate to a better experience with modeling, animation, and physics in Cinema 4D.

Actual CPU rendering is extremely well threaded, though, so for that we need to look at the multi-core results. The generational increase here isn't quite as extreme, but most of the Ryzen 5000 Series still gain 10-15% over the older models. They also roundly beat all of the Intel Core and especially Core X processors in terms of price:performance ratio (value for the money, effectively)... with the possible exception of the Core i9 10900K edging out the slightly less expensive Ryzen 7 5800X. That is the top of Intel's mainstream Core series, though, pitted against the Ryzen model that is third from the top of AMD's new line-up; a rather hollow victory, if it is one at all. One group of processors these new chips cannot beat, however, is AMD's own Threadripper line. Those have far higher core counts, so even without being as fast per-core they still excel at rendering.

The fantastic single-threaded performance of these new Ryzen processors will make them excellent for working with modeling, animation, and physics in Cinema 4D - while also offering solid rendering speeds, especially considering their price points. For pure rendering workloads, however, AMD's Threadripper line is faster yet (and more expensive).

Looking for a 3D Design Workstation?

Cinebench is now based on the latest Release 23 code using updated compilers, and has a minimum runtime activated by default (previously hidden in preferences)

Yup, was just talking about that with Matt. Looks like it is mostly about supporting the new Mac ARM processors, but I'll be checking soon to see if there is any performance impact on Windows PCs. We'll likely move to using it anyway, of course :)

Sir, I want to buy a very powerful accelerometer for Adobe and Cinema 4D programs
What is the powerful processor please and thank you