AMD has launched a new top-end CPU in its Threadripper product line, equipped with a whopping 64 cores. We are putting this new 3990X chip to the test in one of the applications where its high core count should shine: CPU based rendering in Cinema 4D. Keep reading to find out how it stacks up to the other Threadripper models as well as Intel and AMD's various other desktop processors. 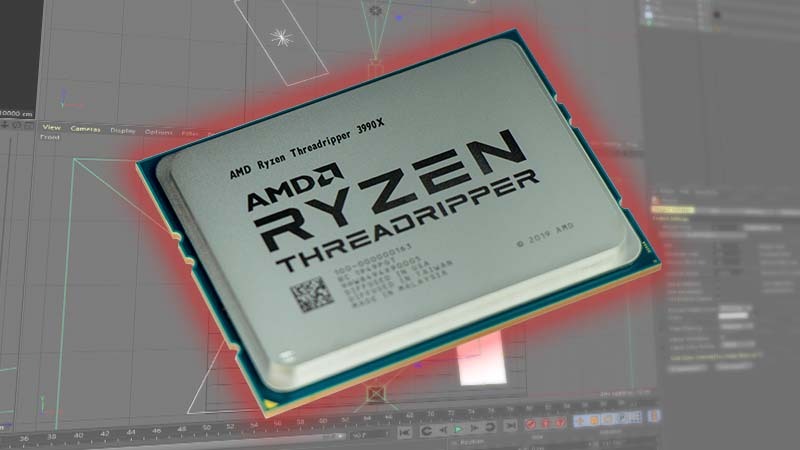 For this article, we are primarily interested in how this new AMD Threadripper 3990X compares to other current-generation processors. The focus is on CPU-based rendering performance in Cinema 4D, so we are using Maxon's free Cinebench R15 and R20 benchmarks. More info about these tools and how we use them are available in the Benchmark Details.

Additionally, it is worth pointing out that the CPU cooler we used for testing the new TR 3990X is somewhat borderline for how much heat this processor can potentially put out. In the systems we build with this chip going forward, we will be utilizing a larger heatsink and fan to ensure maximum performance even under extended loads - but in the open-air testbeds we use here in our lab, we found that the cooler we used did not lead to throttling.

As previously mentioned, we used two versions of Maxon's Cinebench utility for this comparison: both the current R20 release and the previous R15. They both render a scene using Cinema 4D's built-in engine, fully utilizing all cores until the render is completed, but the newer version includes a more complex scene that takes longer and thus gives a better comparison for high-performance processors.

Based on how long the render takes, an artificial "CB score" is assigned - with higher scores being better, and representing shorter render times. There is also a single-core mode available, performing the same task with just one active thread - which can give a decent idea of single-threaded performance. It isn't applicable to rendering but can give a rough idea of how CPUs should stack up in modeling.

With the information we have gathered, then, we have put together three charts. The first is full, all core CPU performance in Cinebench R20, while the second is the same type of multi-threaded test from the older Cinebench R15 release. Lastly, we included the single-core results from R15 as well - to give a rough idea of how these processors will compare with each other in modeling and animation tasks.

AMD's new Threadripper 3990X scooped the top performance spot for multithreaded rendering in both versions of Cinebench! This isn't a surprise since CPU-based rendering scales very well with lots of cores, as long as clock speed doesn't suffer too much, and AMD has done a fantastic job of combining those two aspects of performance in their 3rd generation of Threadripper processors. The only alternatives that can match or surpass the 3990X's rendering speed are multi-socket systems with AMD Epyc or Intel Xeon CPUs, but those would cost far more - even just to get similar results! - and often suffer from lower per-core clock speeds.

Speaking of per-core clock speeds, the single-threaded side of Cinebench R15 shows something very interesting. All of the CPUs we tested ended up within a fairly small range, with less than 10% variance from the fastest to slowest models. That means they will all perform roughly on par for tasks that only use one thread or a small handful - which is exactly what 3D modeling and animation do.

For your other tasks in Cinema 4D, like modeling and animation, this CPU is only a few percent slower than higher clock speed models like the Core i9 9900K and Ryzen 9 3950X, so you no longer have to sacrifice in that area to get great rendering results. However, if you aren't doing a lot of rendering, or if you use a GPU-based renderer instead, then you can save money with a much less expensive CPU.