Unlike most other applications used in the video post-production process, DaVinci Resolve relies much more on the power of your video card(s) than it does on your processor. However, you do need enough CPU power to keep up with your GPU(s) and there are still some aspects of Resolve (like the Fusion tab) where the CPU is more important.

In this article, we will be looking at a wide range of processors from Intel and AMD including the Intel 9th Gen, Intel X-series, AMD Ryzen 2nd Gen, and AMD Threadripper 2nd Gen CPU lines. In addition, we will be comparing them to a current Mac Pro 12 Core and iMac Pro 14 Core for those that are curious about how much faster a PC workstation can be compared to a Mac. 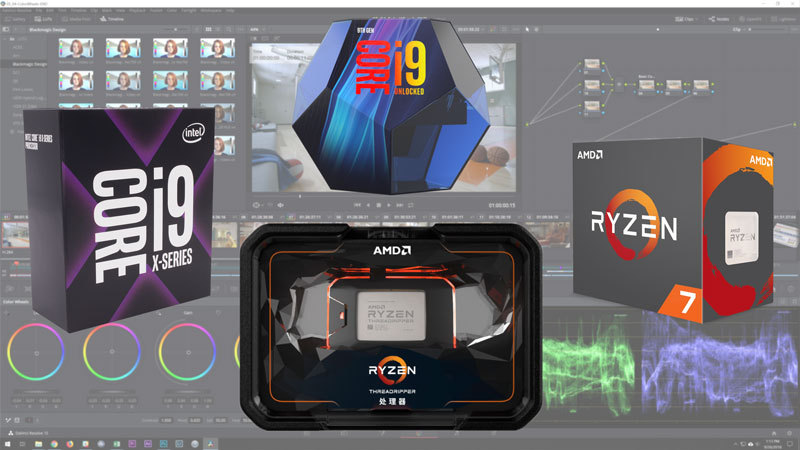 Our testing was done on DaVinci Resolve Studio 15.1.2.8 and primarily revolves around the Color tab and focuses on the minimum FPS you would see with various media and levels of grading. The lowest level of grading we test is simply a basic correction using the color wheels plus 4 Power Window nodes with motion tracking. The next level up is the same adjustments but with the addition of 3 OpenFX nodes: Lens Flare, Tilt-Shift Blur, and Sharpen. The final level has all of the previous nodes plus one TNR node. 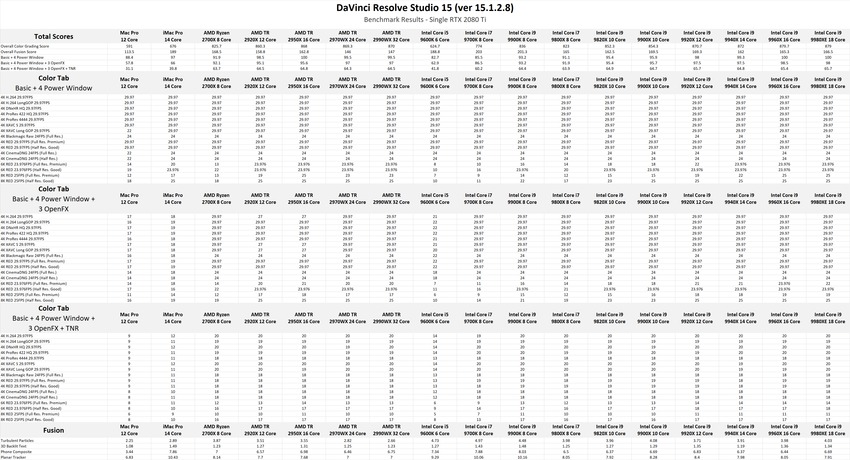 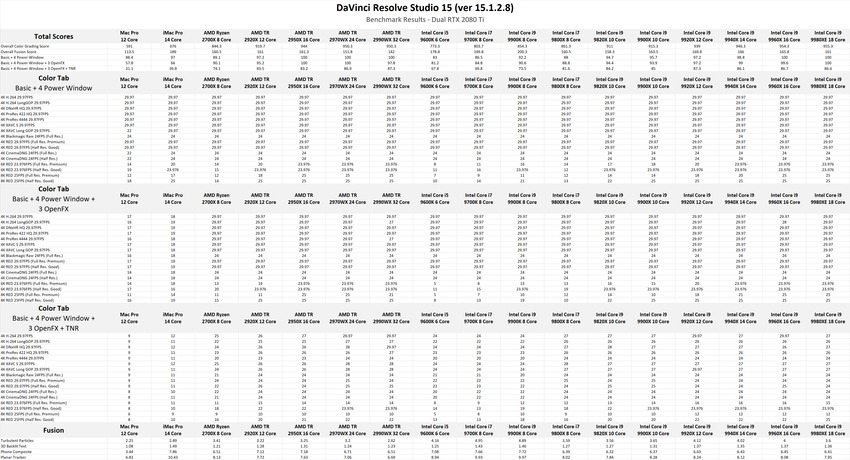 To analyze our benchmark results, we are going to break it down based on whether we used one or two RTX 2080 Ti GPUs and the three different levels of color grading we tested. The easiest level of grading - a basic grade with 4 power windows - is not too difficult and every CPU we tested should be able to give full playback FPS with everything but RED 6K/8K media. However, each level up should show more and more of a difference between the different processors.

The "Score" shown in the charts is a representation of the average performance we saw with each GPU for that test. In essence, a score of "80" means that on average, the system was able to play our project at 80% of the tested media's FPS. A perfect score would be "100" which would mean that the system gave full FPS even with the most difficult codecs and grades. 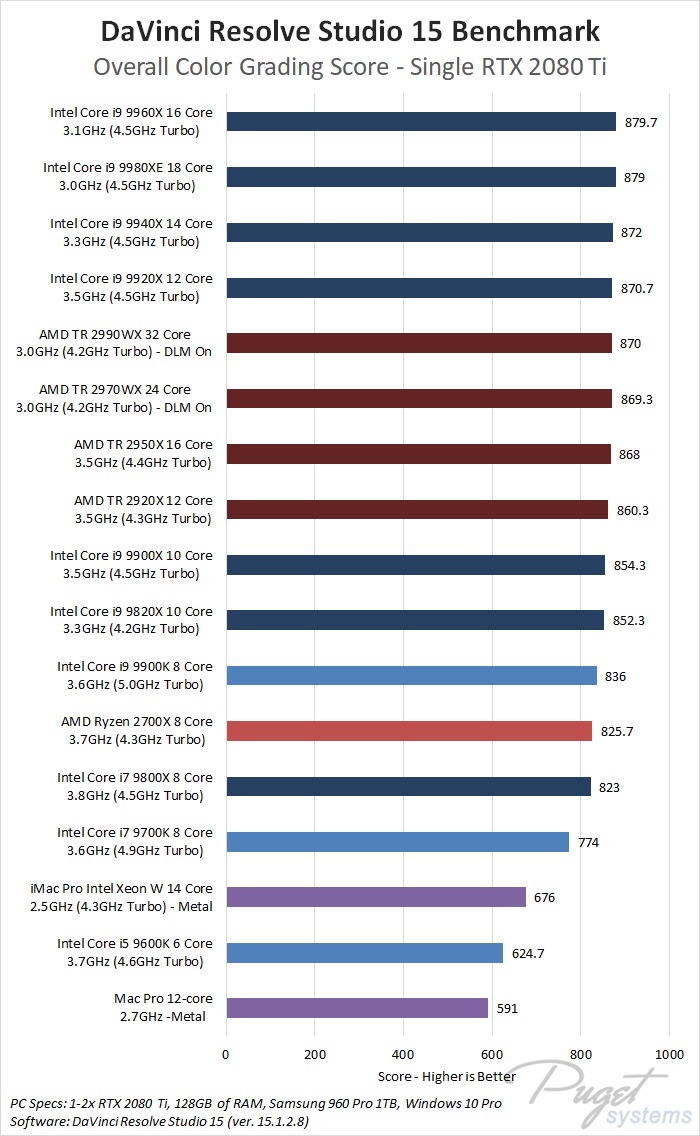 Starting with the Color Grading results with a single RTX 2080 Ti, you can really clearly see that while you need to have enough CPU power to keep up with your GPU(s), there isn't much benefit to having more CPU power than you need. In fact, all the AMD Threadripper CPUs and all the Intel X-series CPU (with the exception of the i7 9800X) pretty much performed the same. So, if you wanted to get the full performance out of your RTX 2080 Ti, as long as you simply use an Intel X-series i9 or AMD Threadripper CPU, you should be just fine.

If those CPUs are outside your budget, the Intel 9th Gen CPUs also did pretty well, although at this level the AMD Ryzen 2700X is likely a better choice since it is typically priced closer to the i5 9600K while being ~30% faster for color grading in Resolve.

On the Mac side, the iMac Pro and Mac Pro don't use particularly powerful GPUs which means that they are not ideal for high-end color grading work in DaVinci Resolve. Even the iMac Pro with the Vega 64 GPU was only able to beat the Core i7 9600K, and even then only by ~8%. Keep in mind that this isn't a completely fair comparison in terms of CPU power alone since we would need to be using an AMD Radeon Vega 64 on the PC in order to get a direct comparison. 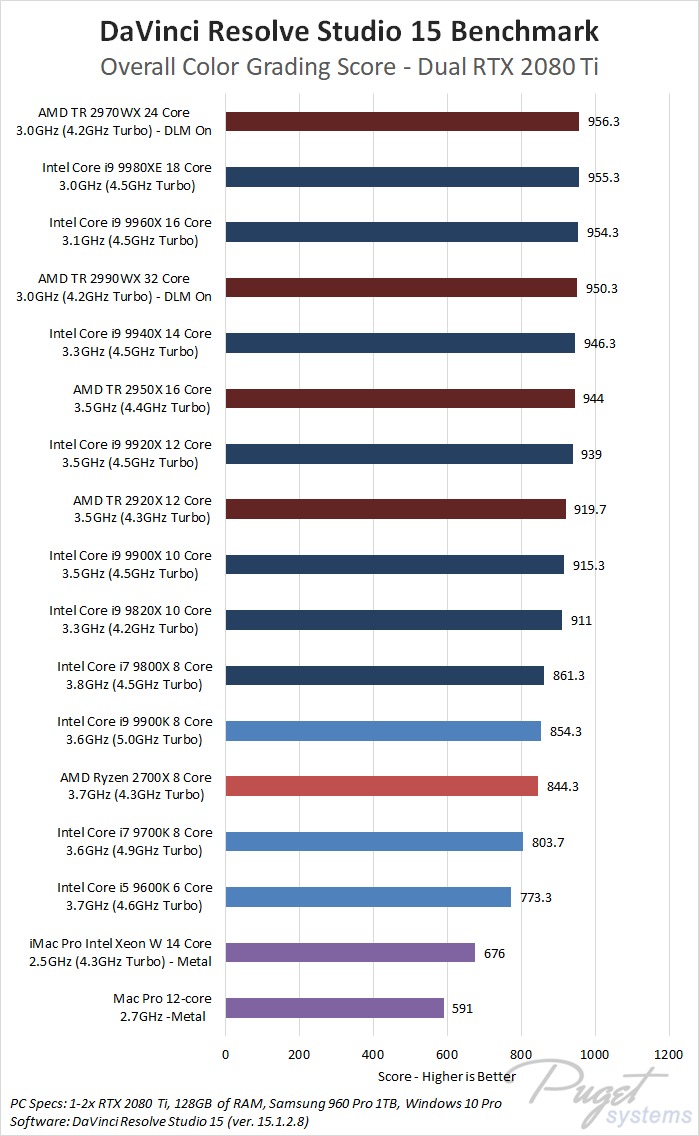 With dual RTX 2080 Ti, we see a bit more of a benefit to using a more powerful CPU. With this setup, we would recommend at least the Intel X-series i9 9920X 12 Core or the AMD Threadripper 2950X 16 Core in order to get full performance. You can go even higher-end if you want to of course, but there is almost no performance reason to do so unless you are planning on adding a third or fourth high-end GPU to the system. 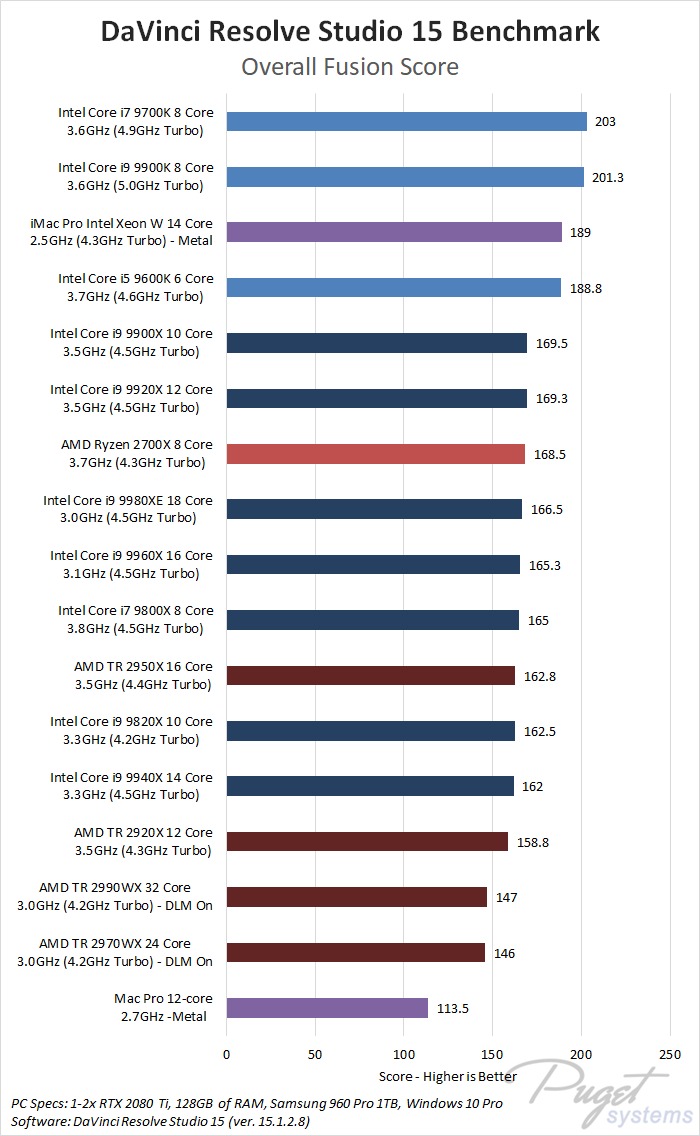 Moving on to the results for Fusion, the first thing we want to point out is that having multiple GPUs doesn't appear to greatly affect performance. To be fair, we are not using footage inside any of our projects that is particularly difficult to process, but given the FPS we saw in each project we doubt that that having multiple GPUs would significantly improve performance even if you are using 8K RED media. Because of this, we are going to focus on the results we saw with a single RTX 2080 Ti video card.

Fusion is very different than the rest of Resolve since it is more about single-threaded CPU performance than anything else. In fact, these results are similar to what we saw for After Effects. In short, the Intel 9th Gen CPUs are king, easily beating the Intel X-series and AMD Threadripper CPUs. The one bit of a surprise to us was that the 14 core iMac Pro was able to keep up very well with the Intel 9th Gen CPUs in the Fusion Tab. It wasn't quite as fast as the i9 9900K or i7 9700K, but it certainly did better than the Intel X-series or AMD Threadripper CPUs.

Something interesting to point out is the low performance we saw with the AMD Threadripper "WX" models. Those models are essentially two CPUs crammed onto a single die which results in additional overhead that can cause performance loss in applications that cannot take advantage of higher core counts. Even with the new "Dynamic Local Mode" feature enabled (which is supposed to assist in this sort of workload) the WX models clearly have some performance issues.

Intel vs AMD vs Mac for DaVinci Resolve 15

In DaVinci Resolve, performance is determined more by the power of your GPU(s) than your CPU, but it is still important to have enough CPU power to keep up. In most cases, we would recommend using an Intel X-series i9 CPU or an AMD Threadripper CPU in order to ensure that you are getting the best performance for your dollar. For a mid-range CPU (roughly $500-$1200) Threadripper should give you slightly better performance for color grading work, although at higher price points the Intel X-series take the lead.

Where it really gets complicated is if you use (or plan to use) the relatively new Fusion tab. Fusion is much more about single threaded CPU performance, so CPUs like the Intel 9th Gen i9 9900K are king. The Intel X-series still do pretty well in Fusion - which makes them a great balance between the Color and Fusion Tabs - although AMD Threadripper CPUs tend to underperform slightly since their per-core performance is currently lower than Intel.

Our testing included the Mac Pro and iMac Pro, but to be honest this isn't a very fair CPU comparison. Since the Mac systems use AMD graphics with relatively mid-range GPU performance, our testing doesn't really show what the Mac systems can do on a pure CPU level. We could have used a Radeon Vega 64 in all our testing, but for the price of a 14-core iMac Pro you can easily get a PC with dual RTX 2080 Ti GPUs which should be about 40% faster in DaVinci Resolve than the iMac Pro. So, while this isn't fair to the CPU alone, it still is very informative on how a Mac system could compare to a PC in DaVinci Resolve.

If you are curious how the latest Intel and AMD processors perform in other applications, be sure to check out our recent Processor articles as we have a number of articles looking at CPU performance in Photoshop, Lightroom, After Effects, Premiere Pro, and many other software packages.