Skip to content
Always look at the date when you read an article. Some of the content in this article is most likely out of date, as it was written on December 5, 2018. For newer information, see After Effects CC 2019 CPU Roundup: Intel vs AMD vs Mac

Choosing the right hardware for your new After Effects workstation can often be overwhelming with hundreds or thousands of different hardware components to choose from. Even if you are just trying to decide on a CPU, it can still be daunting to find one that not only fits your budget, but will also give you the best performance for your dollar.

In this article, we are going to be benchmarking – using our newly released Puget Systems After Effects CC Benchmark – a wide range of processors from Intel and AMD including the Intel 9th Gen, Intel X-series, AMD Ryzen 2nd Gen, and AMD Threadripper 2nd Gen CPU lines. In addition, we will be comparing them to a current Mac Pro 12 Core and iMac Pro 14 Core for those that are curious about how much faster a PC workstation can be compared to a Mac. 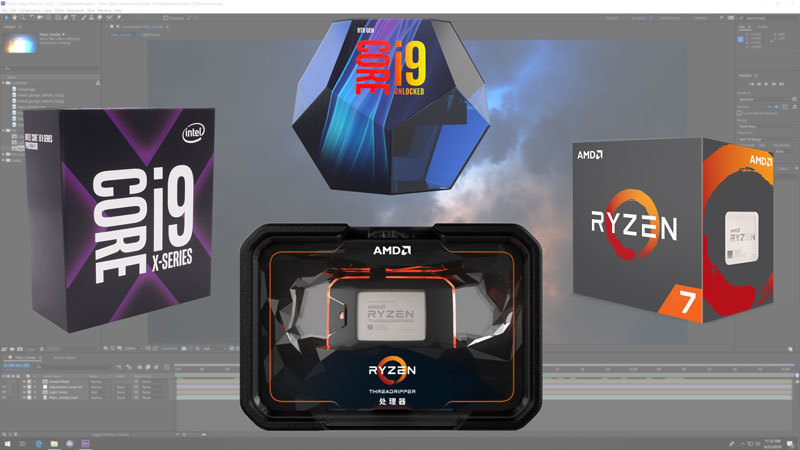 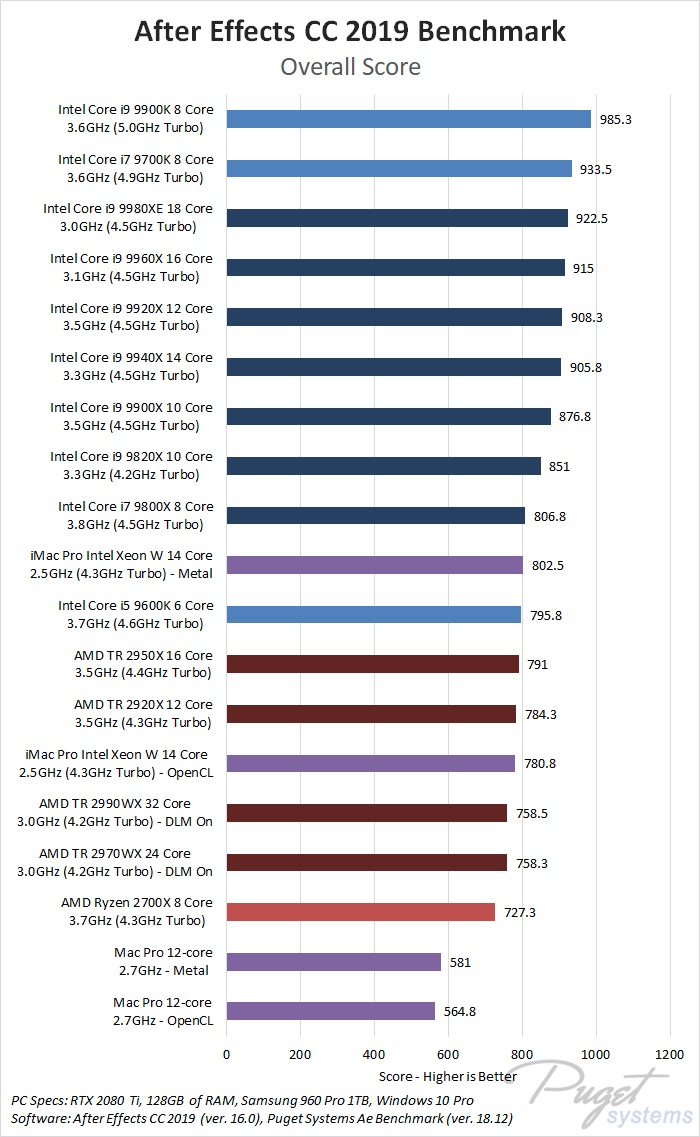 If we sort by the overall score, you can see that the Intel 9th Gen CPUs like the Core i9 9900K and Core i7 9700K are currently the top performers even though they are much less expensive than the Intel X-series or AMD Threadripper CPUs. This is really to be expected since most of After Effects is only able to use a handful of CPU cores.

After the Intel 9th Gen, the next fastest processors are those in the Intel X-series line that was recently updated. These X-series CPUs are around 6-20% slower than the Intel Core i9 9900K depending on which model you choose, but the big advantage of these CPUs is that they support up to 128GB of RAM where the Intel 9th Gen CPUs only support 64GB max. This doesn't show up in our benchmarks, but if your projects tend to be complex and you rely on RAM Preview caching to stay sane, then you may want to use an X-series CPU to get the higher RAM capacity.

Below the Intel X-series are the iMac Pro 14 core, AMD Threadripper, and AMD Ryzen 2700X which are all roughly 25% slower than the Intel Core i9 9900K. At the very bottom of the chart is the old (but somehow still current) Mac Pro which is about 40% slower than the i9 9900K. That doesn't make a PC with the i9 9900K twice as fast as the (much) more expensive Mac Pro, but it is getting close.

Intel vs AMD vs Mac for After Effects CC 2019

Compared to an Intel-based system, AMD falls short at the moment. Whether you are looking for the best possible performance or the best performance for your dollar, using an Intel CPU is a pretty clear choice for a workstation that is primarily geared for After Effects. Likewise, if Ae performance is your primary concern, the iMac Pro (and especially the Mac Pro) are well behind an Intel-based PC. Compared to a PC with a i9 9900K, the iMac Pro 14 core used in our testing is about 20% slower even though it costs nearly twice as much. Even if you decide to go with an X-series CPU in order to get the higher RAM capacity, the iMac Pro was still ~15% slower even though it would cost roughly 25% more expensive.

If you are curious how your current system compares to any of these processors, we recommend downloading and running our After Effects CC Benchmark which is the exact benchmark used in our hardware articles. And if you are interested in how the latest Intel and AMD processors perform in other applications, be sure to check out our recent Processor articles as we have a number of articles looking at CPU performance in Photoshop, Lightroom, Premiere Pro, DaVinci Resolve, and many other software packages.