Skip to content
Always look at the date when you read an article. Some of the content in this article is most likely out of date, as it was written on July 19, 2019. For newer information, see After Effects CPU Roundup: AMD Ryzen 3rd Gen, AMD Threadripper 2, Intel 9th Gen, Intel X-series

Way back in 2014, After Effects was very efficient at using multiple CPU cores to improve performance which would have made processors like AMD's new Ryzen series (which currently have up to 12 cores and soon will have a 16 core model) absolutely terrific. However, Adobe has trended away from this in recent years, largely due to the addition of GPU acceleration. Newer versions of Ae are certainly still faster than older versions, but today it is less about having a ton of CPU cores than having a CPU that has very fast individual cores.

This makes the new Ryzen 3rd generation CPUs very interesting since not only do they have more cores than the previous generation, AMD has also spent considerable effort to improve performance for moderately threaded applications like After Effects. In a large part, this is really what makes AMD's new processors very exciting. The increase in core count is certainly nice (and may be useful for those using multi-threading plugins/scripts to improve render performance), but most applications simply are not going to see a benefit from the higher core counts that both Intel and AMD are trending towards. Instead, it is the IPC (instructions per clock) improvements that will be more significant for most users – even if that doesn't show up in the marketing specs. 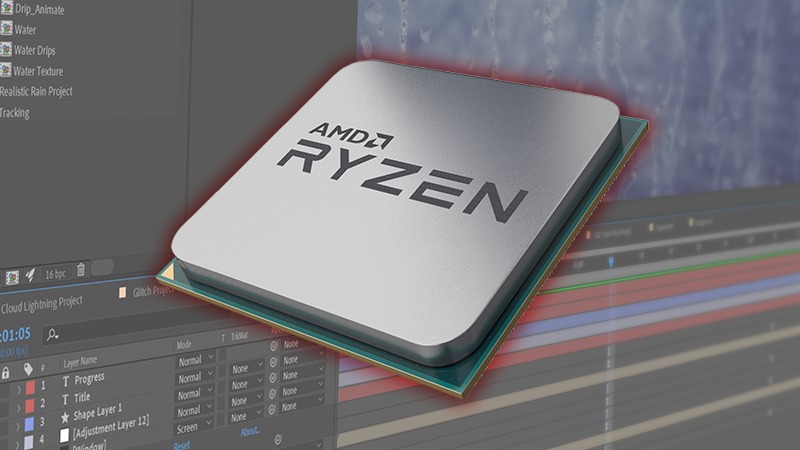 In this article, we will be looking at exactly how well the new Ryzen 3600, 3700X, 3800X, and 3900X perform in After Effects. Since we expect these CPUs to shake up the market quite a bit, we also took this opportunity to do a full CPU roundup. Not only will we include results for a few of the previous generation Ryzen CPUs, but also the latest AMD Threadripper, Intel 9th Gen, and Intel X-series CPUs. And for good measure, we will throw in a 14-core iMac Pro and a current (for the moment) 2013 Mac Pro 12-core as well.

Note that while most of our PC test platforms are using DDR4-2666 memory, we did switch up to DDR4-3000 for the AMD Ryzen platform. AMD CPUs can be more sensitive to RAM speed than Intel CPUs, although in our Does RAM speed affect video editing performance? testing, we found that the new Ryzen CPUs only saw modest performance gains in Creative Cloud applications when going from DDR4-2666 to even DDR4-3600 RAM.

For each platform, we used the maximum amount of RAM that is both officially supported and actually available at the frequency we tested. This does mean that the Ryzen platform ended up with only 64GB of RAM while the other platforms had 128GB, but since our benchmarks never need more than 32GB of RAM to run, this does not actually affect performance at all. We have recently re-confirmed this in our RAM speed article linked above.

However, keep in mind that this is technically overclocking since the AMD Ryzen 3rd Gen CPUs support different RAM speeds depending on how many sticks you use and whether they are single or dual rank:

Since we are using four sticks of dual rank RAM (almost every 16GB module available will be dual rank), we technically should limit our RAM speed to DDR4-2666 if we wanted to stay fully in spec. However, since many end users may end up using a RAM configuration that supports higher speeds, we decided to do our testing with DDR4-3000, which right in the middle of what AMD supports.

The benchmarks we will be using are the latest release of our public After Effects benchmarks. Full details on the benchmarks and a link to download and run it yourself are available at:

While our benchmark presents various scores based on the performance of each test, we also wanted to provide the individual results. If there is a specific task that is a hindrance to your workflow, examining the raw results for that task is going to be much more applicable than our Overall scores. Feel free to skip to the next section for our analysis of these results if you rather get a wider view of how each CPU performs in After Effects. 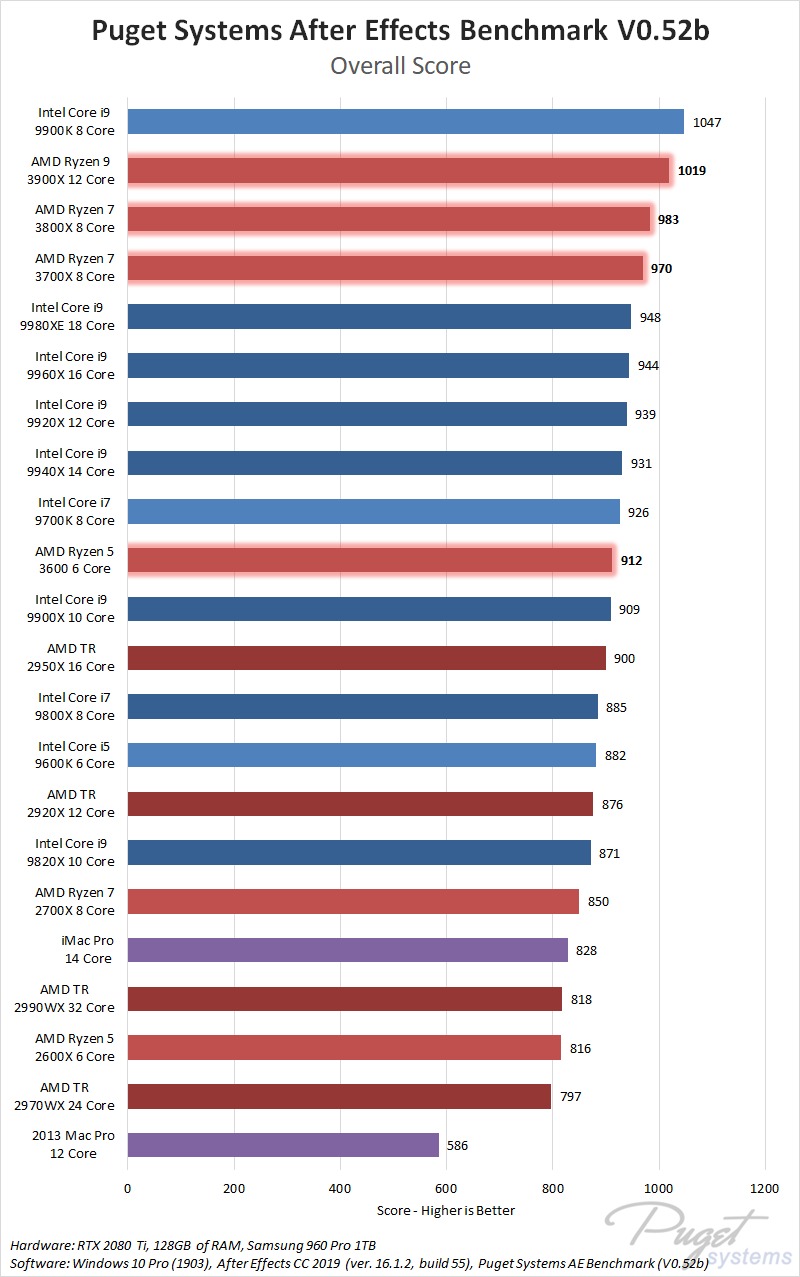 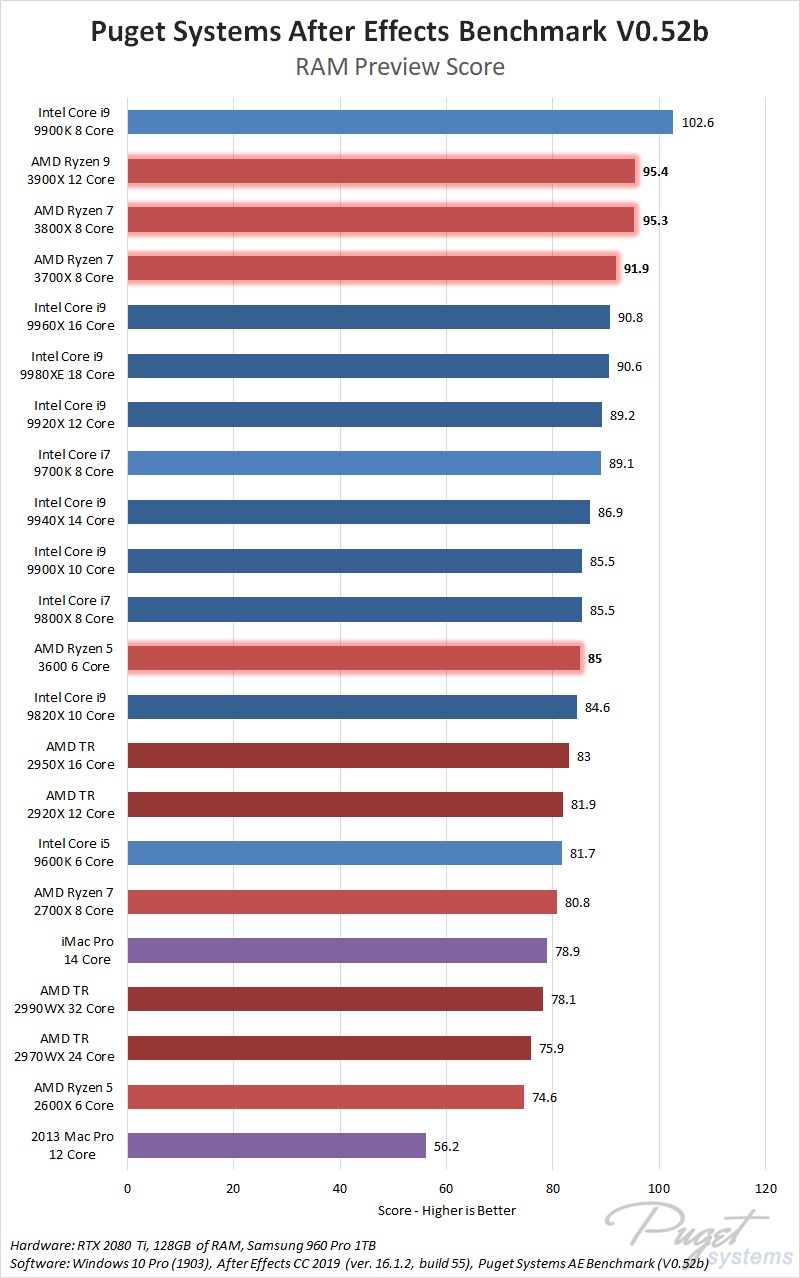 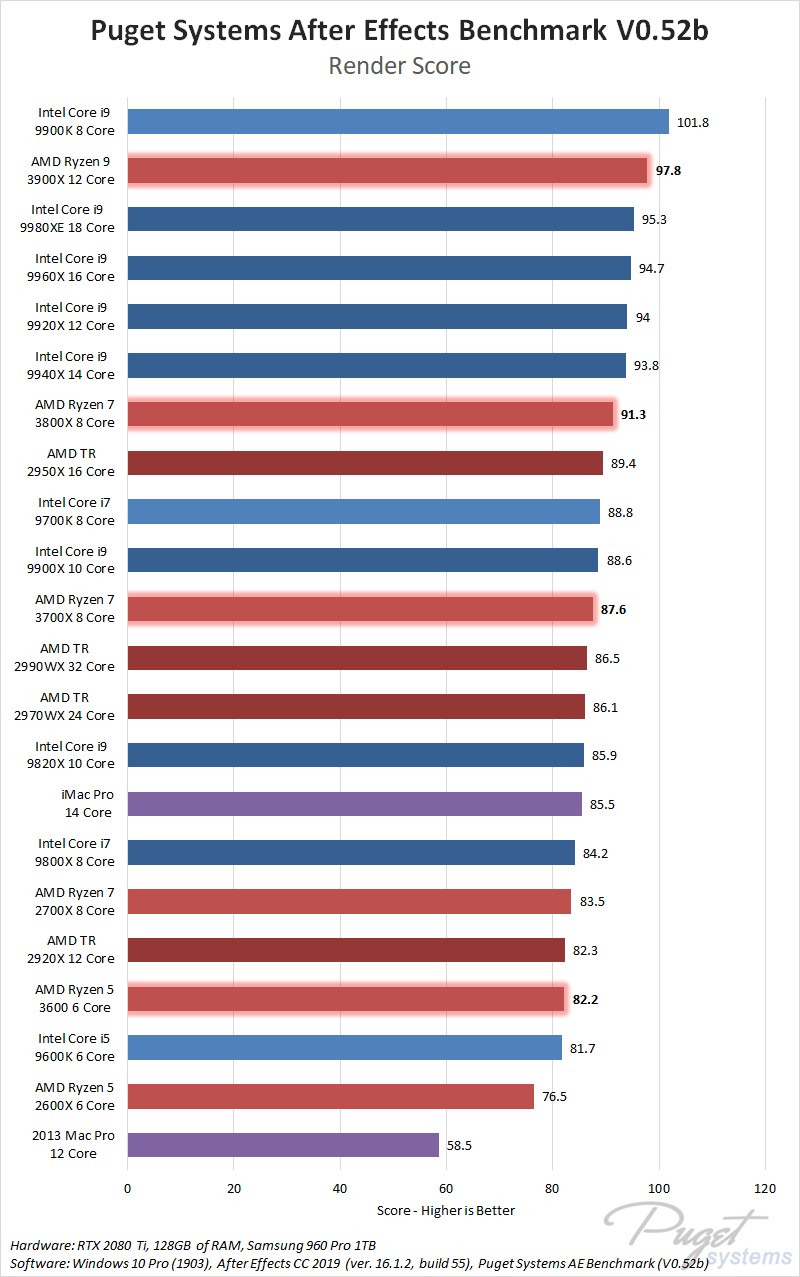 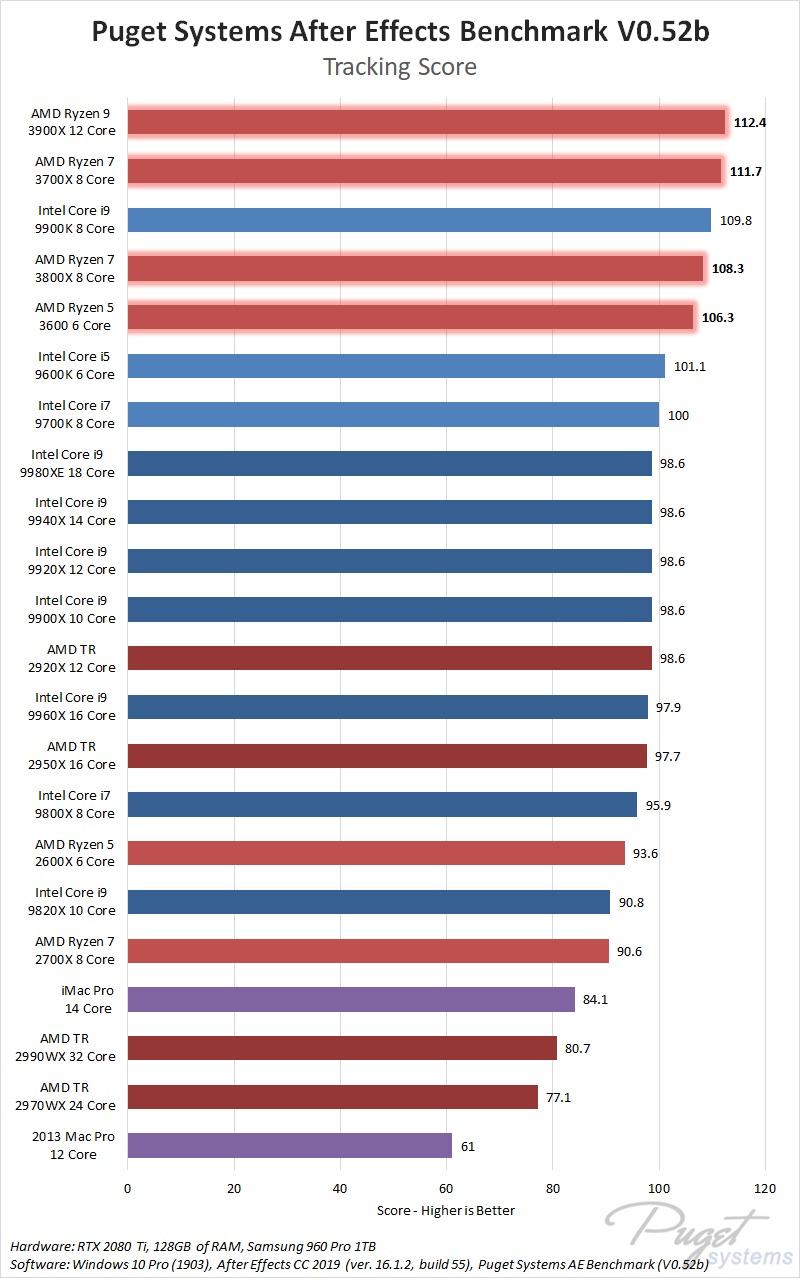 Looking at the overall performance in our After Effects benchmark (which combines RAM Preview, Rendering, and Tracking tests), the results are very interesting. The Intel Core i9 9900K continues to stand at the top of the chart, but the new AMD Ryzen CPUs are right on it's tail. In fact, AMD takes the 2nd, 3rd, and 4th place spots!

What this means is that while Intel is still the top dog for general After Effects usage, the AMD Ryzen 5 and 7 CPUs match very favorably against Intel. While pricing is constantly changing, with current MSRP pricing this makes AMD somewhere around 6% faster than Intel at similar price points in the mid-range. At the top-end, the Intel Core i9 9900K maintains a 3% lead over AMD.

To us, this is very exciting to see. Competition between AMD and Intel is always going to be a good thing for consumers, but it has been a while since AMD could seriously compete in applications like After Effects that are only lightly threaded. Given how close the performance was (5% is hard to notice in the real world), we would say that at least in this benchmark, it is pretty much a wash between Intel and AMD.

While most motion graphics artists use After Effects in a fairly traditional manner, many are starting to leverage multiprocessing plugins or homemade scripts to improve rendering performance. These typically leverage a little-known application called "aerender" that is installed alongside After Effects which allows you to divide up your render across multiple threads in order to fully utilize the performance of your CPU and GPU. In fact, the limiting factor is often the amount of RAM and VRAM you have available since each thread requires it's own share of memory.

Since this form of rendering (whether it be on your local machine or across multiple systems on a network) has been gaining in popularity lately, we decided to create a new version of our After Effects benchmark that tests a number of compositions with anywhere from a single render thread to as many threads as your system has CPU cores. If you want to try this benchmark yourself, we have a beta available at Puget Systems After Effects CC Render Node Benchmark. 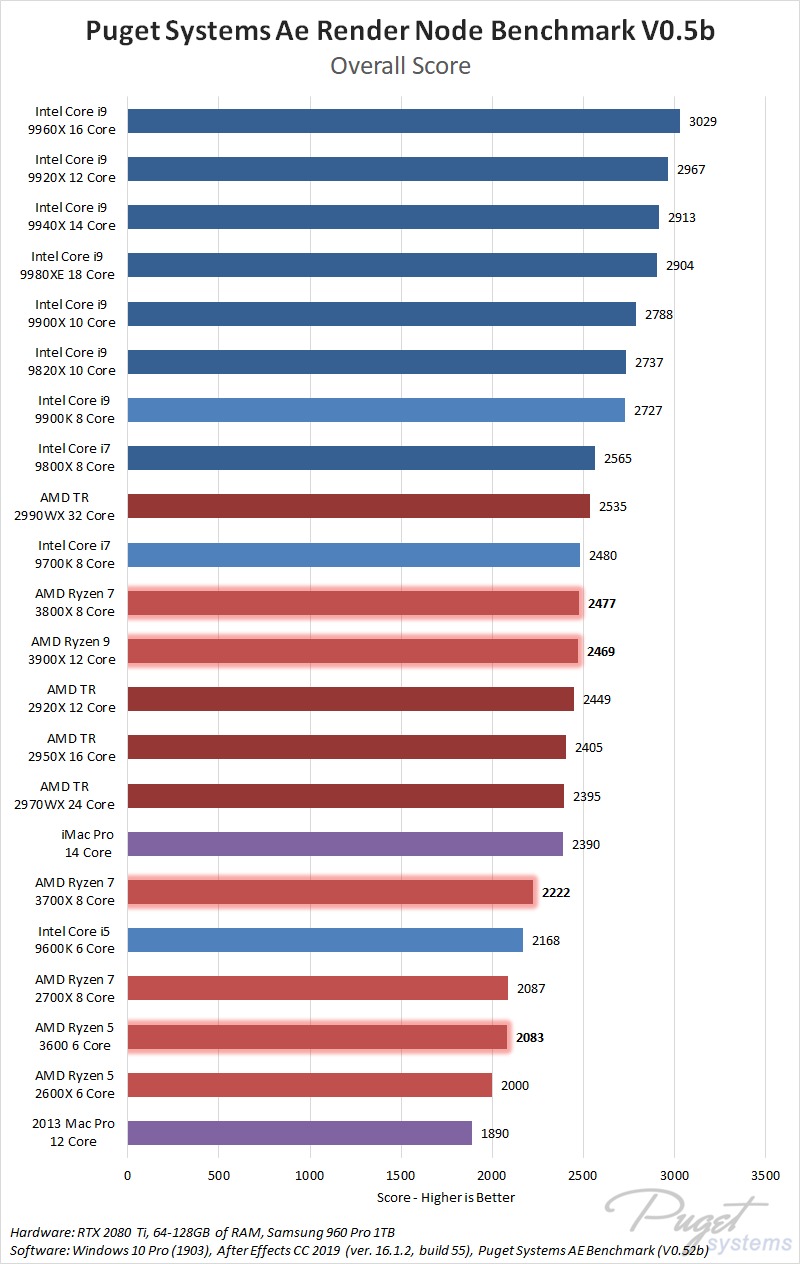 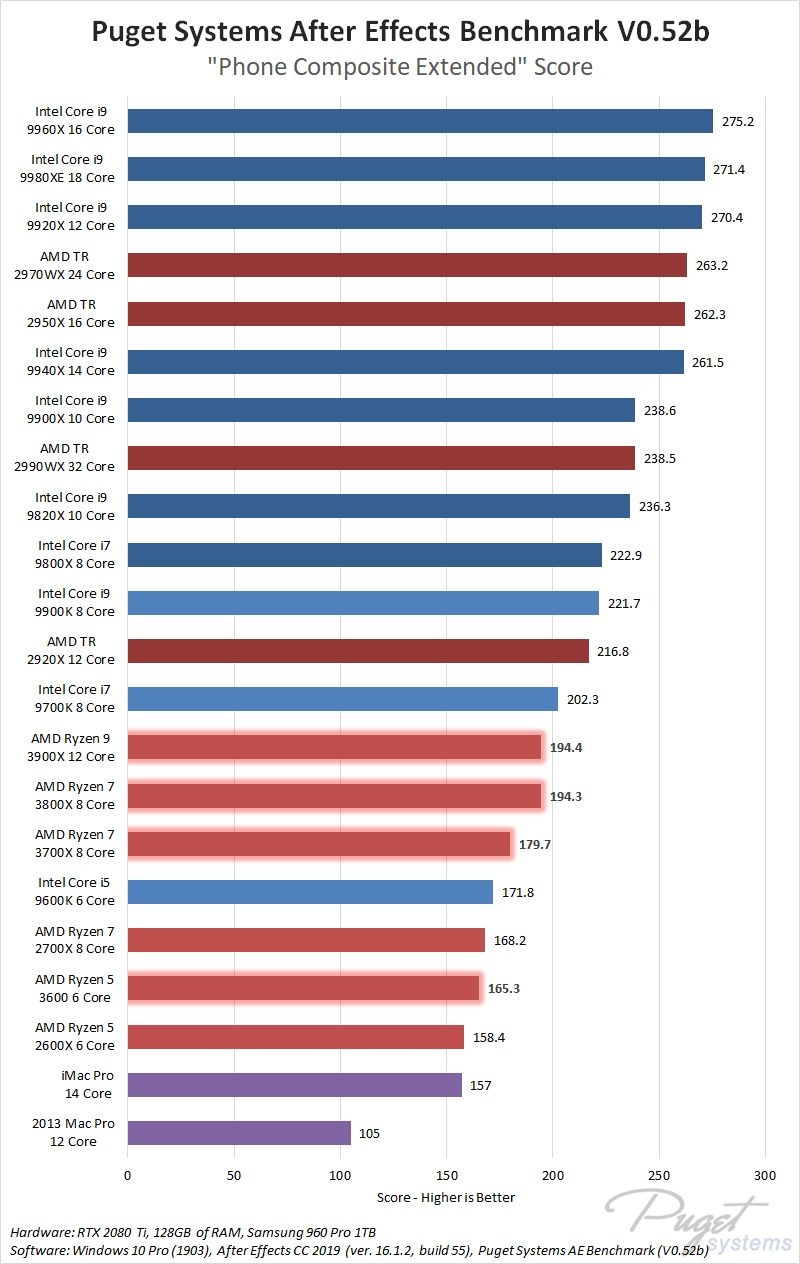 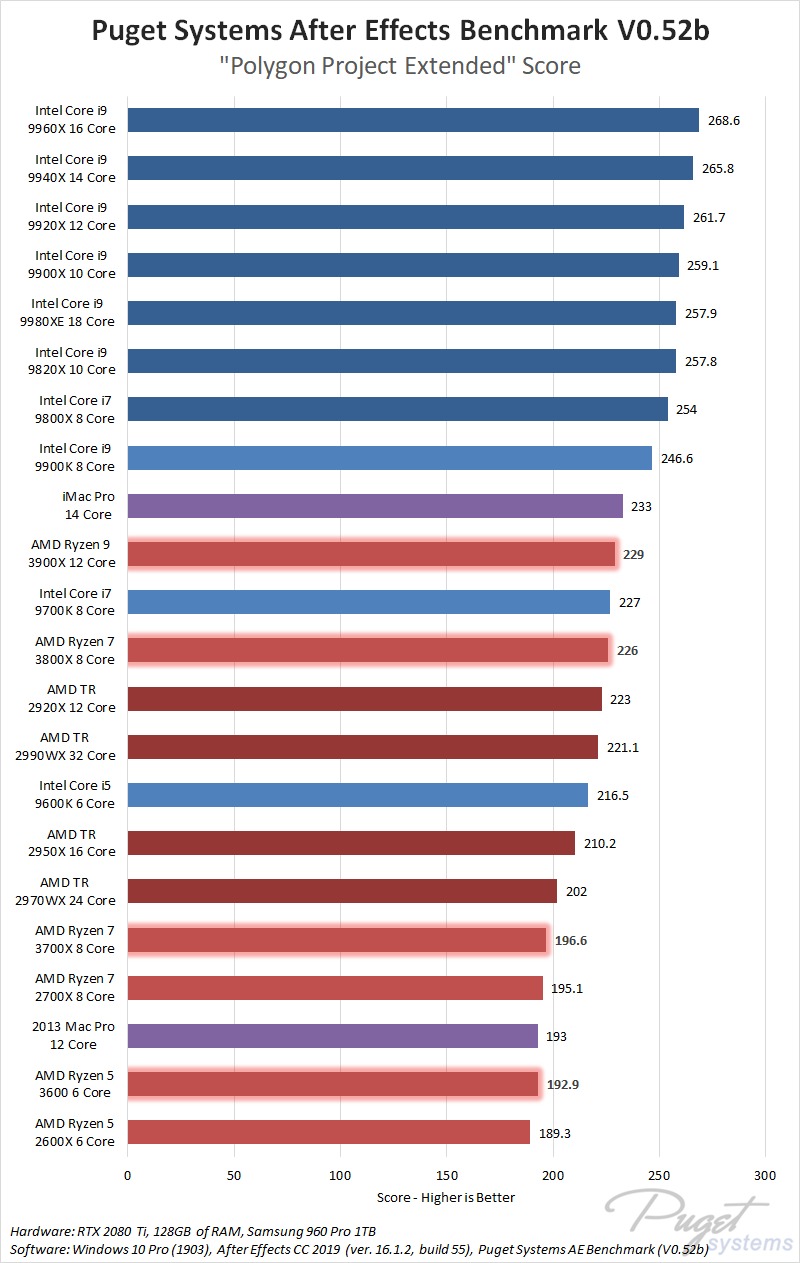 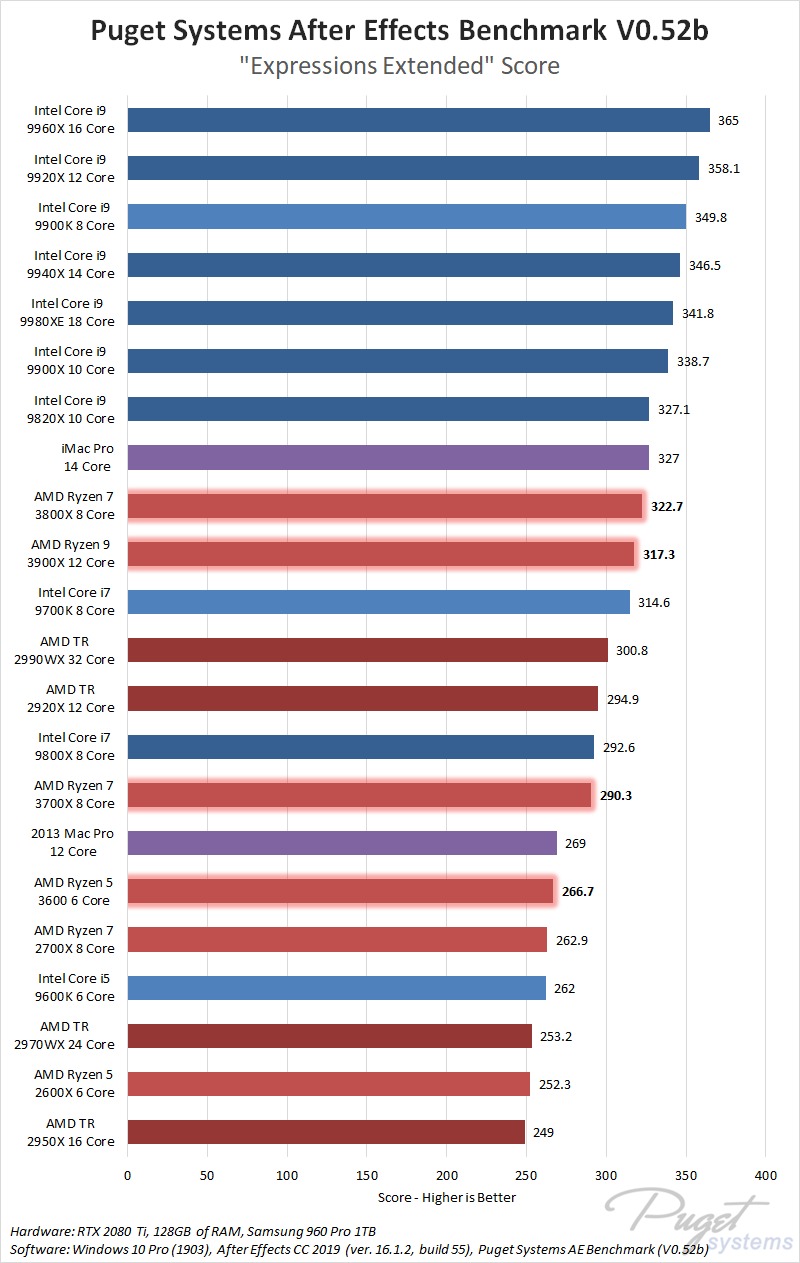 This is the first iteration of our After Effects Render Node benchmark, but already the results are completely different than what we expected. Given that the Ryzen 9 3900X has four more cores than the Intel Core i9 9900K, we expected it to take the lead. Instead, the 9900K actually pulled further ahead and ended up being ~10% faster than the 3900X.

On the whole, the real winners for this test are clearly the Intel X-series CPUs. The Intel 9th Gen CPUs also did extremely well for their price and are likely still what most users will want, but if you need a system that can tear through renders as fast as possible, the higher-end X-series ended up being on average about 11% faster than the Intel 9th Gen series.

Are the Ryzen 3rd generation CPUs good for After Effects?

Overall, the new AMD Ryzen CPUs perform neck-in-neck with the Intel 9th Gen CPUs in traditional After Effects workflows. The Intel 9900K continues to hold the performance crown by a slim margin (especially for RAM Preview performance), but AMD has a slight lead at the Ryzen 5 and 7 price-points. If you use multithread plugins or scripts like BG Renderer Max or RenderGarden, however, Intel take a pretty significant lead over AMD at the top-end, but it continues to very close at the mid/low-end.

In the real world, the extra performance during RAM Preview with the Intel Core i9 9900K will likely be noticeable, but if you are looking for a CPU at a slightly lower price point, it is going to be really hard to tell the difference between a system with an Intel 9th Gen CPU and one with an AMD Ryzen 3rd generation CPU. Because of this, many users are going to want to consider other factors beyond just price and performance. While there are many more factors that go into your choice of platform, here are a few other considerations to keep in mind:

On the Intel side, the Z390 platform has been available for quite some time which means that most of the bugs and issues have been worked out. In our experience over recent years, Intel also simply tends to be more stable overall than AMD and is the only way to get Thunderbolt support that actually works. Thunderbolt can be a bad time on PC, and there are only a few motherboard brands (like Gigabyte) where we have had it actually work properly.

For AMD, the X570 platform is very new and there will be a period of time where bugs will need to be ironed out. However, AMD is much better about allowing you to use newer CPUs in older motherboards, so if upgrading your CPU is something you will likely do in the next few years, AMD is the stronger choice. In addition, X570 is currently the only platform with support for PCI-E 4.0. This won't directly affect performance in most cases (although it may allow Ae to write to the disc cache faster), but it will open up the option to use insanely fast storage drives as they become available.

Keep in mind that the benchmark results in this article are strictly for After Effects. If your workflow includes other software packages (We have articles for Photoshop, Premiere Pro, DaVinci Resolve, etc.), you need to consider how the processor will perform in all those applications. Be sure to check our list of Hardware Articles for the latest information on how these CPUs perform with a variety of software packages.