DaVinci Resolve is known for its ability to leverage the power of your GPU to improve performance, but it is still very important to have a CPU that is able to keep up. Our recent AMD Threadripper 2990WX & 2950X Performance Testing was a great example of this as with a single GTX 1080 Ti there was very little difference between each CPU we tested, but adding more GPUs made it more important to have a powerful CPU as well. In that testing, the Core i7 8700K lagged behind the Intel X-series and AMD Threadripper CPUs, but with Intel's new 9th Gen CPUs seeing an increase in both core count and frequency, it may be enough to overcome the performance gap.

It is worth noting that one of the biggest issues with these new CPUs is not their performance, but rather the fact that the Z370/Z390 platform they use can only effectively handle up to two GPUs. So even if they do well in our tests, they are not going to be a good choice for a high-end professional color grading workstation since having three or more GPUs is fairly common for DaVinci Resolve. 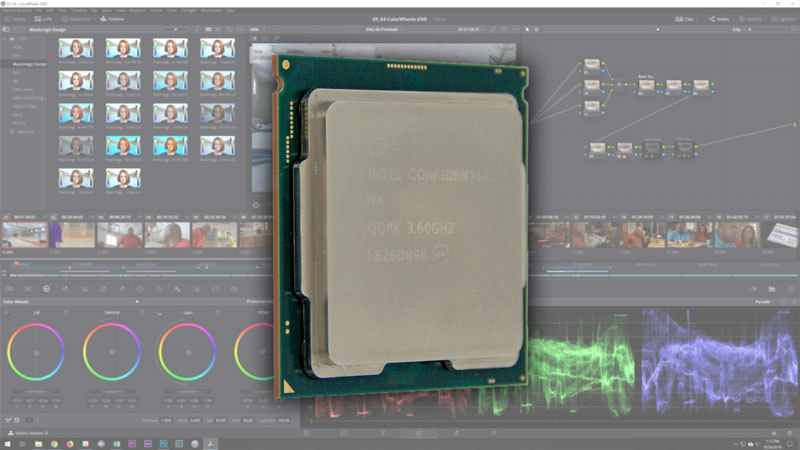 While benchmarking the i7 9700K and i9 9900K against the i7 8700K is likely the most direct comparison we could make, we also wanted to see how these new CPUs stack up against a number of other processors. AMD vs Intel is always a popular discussion, so we included the Ryzen 7 2700X - which tends to be cheaper than either of these new CPUs - as well as the Threadripper 1920X which is similar in price to the i9 9900K. To get an idea of whether or not purchasing a more expensive Intel CPU would give you a notable increase in performance, we also include the i7 7820X and the i9 7900X.

To analyze our benchmark results, we are going to break it down based on whether we used one or two RTX 2080 GPUs and the three different levels of color grading we tested. The easiest level of grading - a basic grade with 4 power windows - is not too difficult and every CPU we tested should be able to give full playback FPS in everything but RED 6K/8K. However, each level up should show more and more of a difference between the different processors. 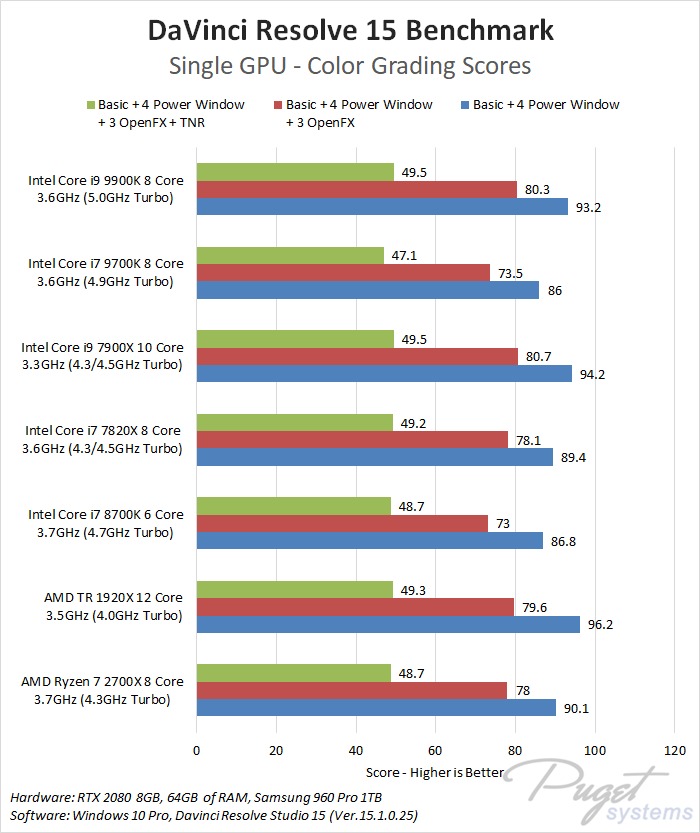 Starting with the results with a single RTX 2080, the i7 9700K did a bit worse than we expected. In fact, it was just a hair slower than the i7 8700K and about 5% slower than the Ryzen 7 2700X. The reason for this is likely the fact that the i7 9700K does not support Hyperthreading, which appears to be fairly important for DaVinci Resolve. 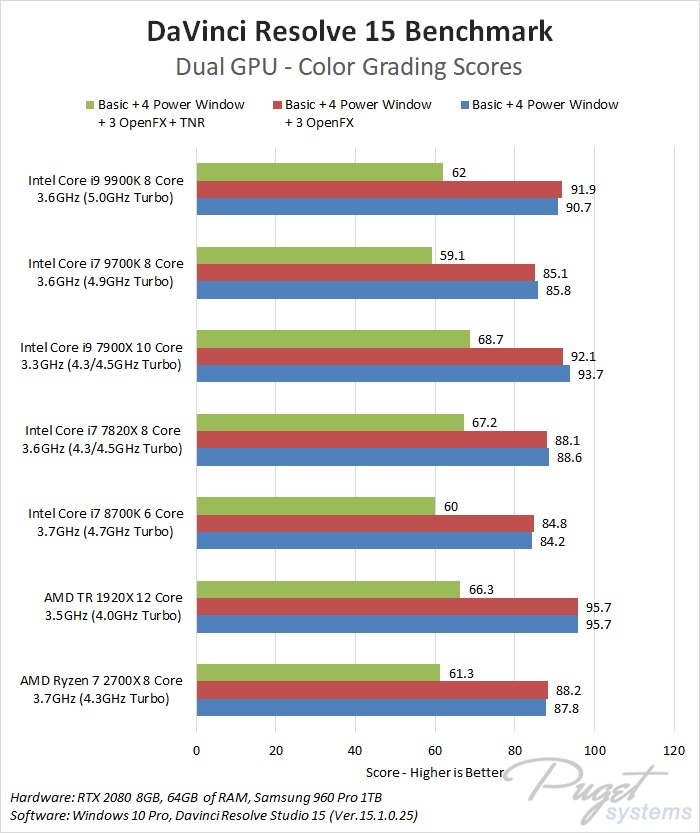 Since we have more GPU power available to the system, the i9 9900K was no longer able to quite keep up with the more expensive CPUs from Intel and AMD. This time, it was up to 10% slower than the Core i9 7900X - although considering the i9 9900K is less than half the price, that is still a very respectable performance.

Fusion doesn't scale well with multiple GPUs (at least not with our test projects), so while we do have dual GPU results available in the previous section, we didn't feel it was necessary to spend time analyzing both the single and dual GPU results. 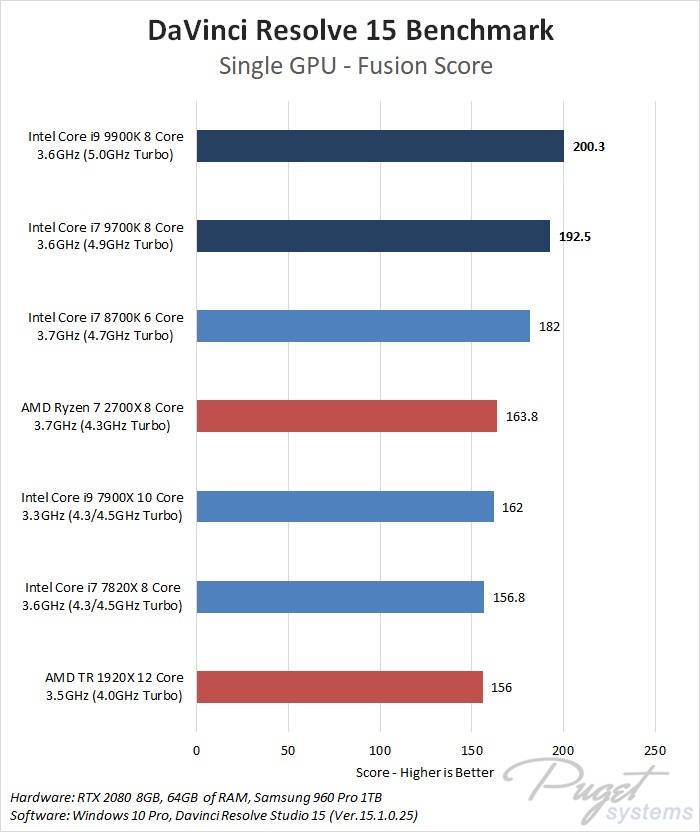 Fusion is relatively new to our DaVinci Resolve testing, but so far it looks like it is a completely different beast than the rest of Resolve. Where higher core count CPUs can help in the Color tab (assuming you have the GPU power to match), in Fusion it appears to be all about the per-core performance from each CPU. In fact, these results are very similar to what we saw in Adobe After Effects.

One thing is clear: if you want the best performance in Fusion, these new 9th Gen CPUs are the best you will be able to get. Relative to the i7 8700K, we saw a 6-10% performance increase depending on whether you use the i7 9700K or the i9 9900K. Compared to something that is otherwise great in Resolve (like the AMD Threadripper 1920X), these CPUs end up being 23-28% faster.

The i7 9700K and i9 9900K CPUs range from being decent to great depending on exactly what you are doing in Resolve. For color grading the i7 9700K is a bit lackluster, but the i9 9900K is able to keep pace with much more expensive CPUs. If you use the new Fusion tab, however, either of these CPUs should outperform everything else currently on the market. 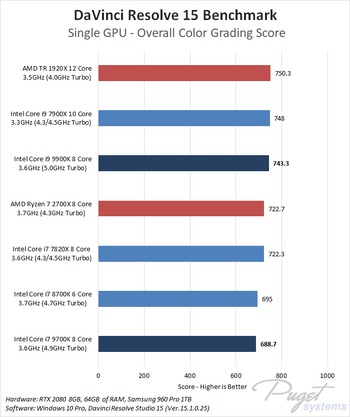 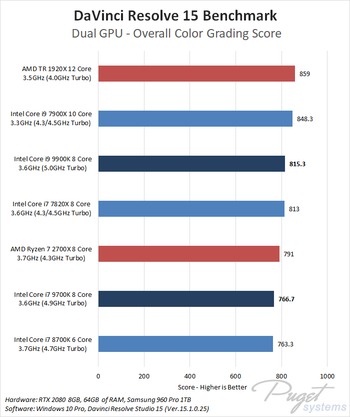 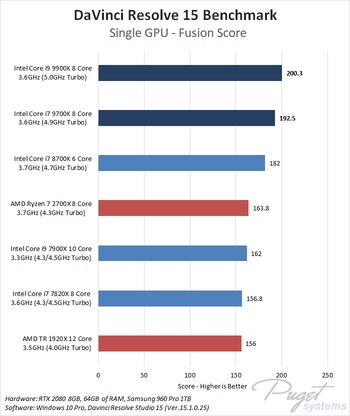 What we found interesting in our testing was not how good the i9 9900K is, but rather how mediocre the i7 9700K is. In much of our other 9th Gen testing the 9700K handily beat the 8700K, but at least for color grading the i7 9700K was only able to just barely keep up. While we haven't done any specific testing to verify, our best guess is that the lack of Hyperthreading on the i7 9700K is what is holding it back in DaVinci Resolve.

The i9 9900K, on the other hand, did very well. If you are just using a single powerful GPU, it should be able to easily keep up with the much more expensive Intel X-series and AMD Threadripper CPUs while giving the best performance we've seen yet in the Fusion tab. The main issue with this CPU is really that it will likely start to fall further behind as you add more GPUs. However, since Resolve relies so heavily on the GPU you are probably better off with an i9 9900K and two GPUs than an i9 7900X and a single GPU. Another issue is that like the i7 8700K and Ryzen 7 2700X, these new CPUs are limited to 64GB of RAM which may be an issue for heavy Fusion users. It has been reported by Anandtech that the i9 9900K may support 128GB of RAM in the future, but we will have to see if it ends up being stable or if the 32GB RAM modules will be at all cost effective.

The Core i9 9900K is about 20% more expensive than the i7 8700K, but in exchange for the higher price you can expect a 10% increase in performance in both the Color and Fusion tabs. This may not sound like much, but it is enough to allow the i9 9900K to keep up with much more expensive Intel and AMD CPUs if you only use a single GPU while giving the best performance we've seen yet in Fusion.

If you are interested in how the 9th Gen Intel Core Processors perform in other applications, be sure to check out our recent Processor articles as we have a number of other articles for looking at the i7 9700K and i9 9900K.