In this article we are going to look at the latest CPU options from Intel and AMD, both of which have recently released high core count processors that should be great for KeyShot. From Intel we have the Core X series of processors, which were code-named Skylake X. They come in 6- to 12-core models currently, though up to 18-core variants will be coming in the future. Up against these chips are AMD's new Threadripper processors, based on a pair of Zen chips combined into a single package. We'll be looking at the 12- and 16-core models in that family to see how they stack up against Intel's traditional lead in this application.

These test configurations include a wide range of Intel and AMD processors. CPU-based rendering in KeyShot is known to scale well across multiple cores, so the lower core count processors are mostly here for reference. Such 4, 6, and even 8 core chips are common on home and gaming computers, as well as office workstations, but they don't really hold up well under heavily threaded applications like rendering. Ideal performance for rendering will be found with 10+ cores, and a while the focus of this particular article is on single-CPU performance we included a dual Xeon processor setup as an example of how well such a system does with heavily threaded workloads.

The results presented below are from KeyShot 7, the current version as of this writing. It is available for a short, fully-functional trial – and while there is no dedicated benchmark mode, several test files are included. We used two of these: the "camera benchmark" to measure FPS (frames per second) while viewing real-time performance in the viewport ;and the cube-like "animation" file to test rendering several images in sequence for a video. We also tested a third file from the KeyShot website, "Bathroom Interior", to check multi-pass rendering on a still image. The results from each of these three tests are broken down and discussed in the next section. 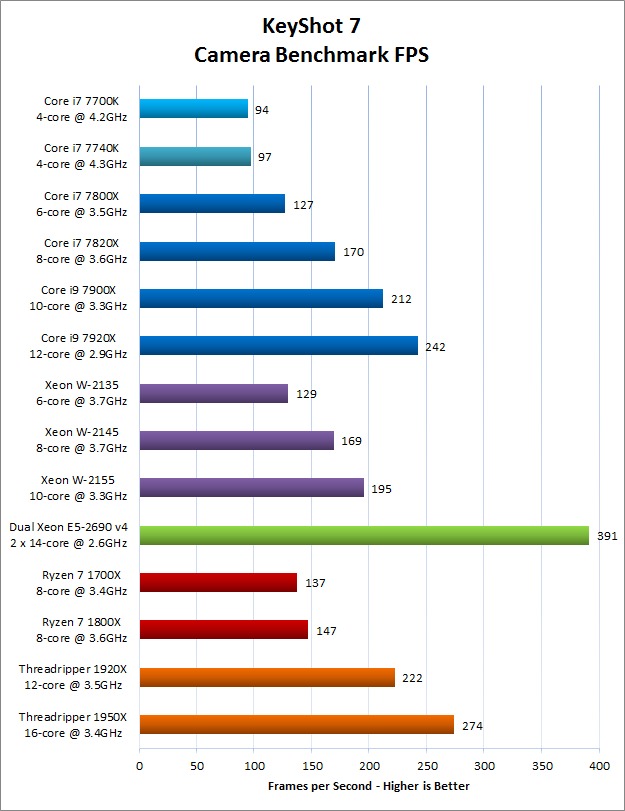 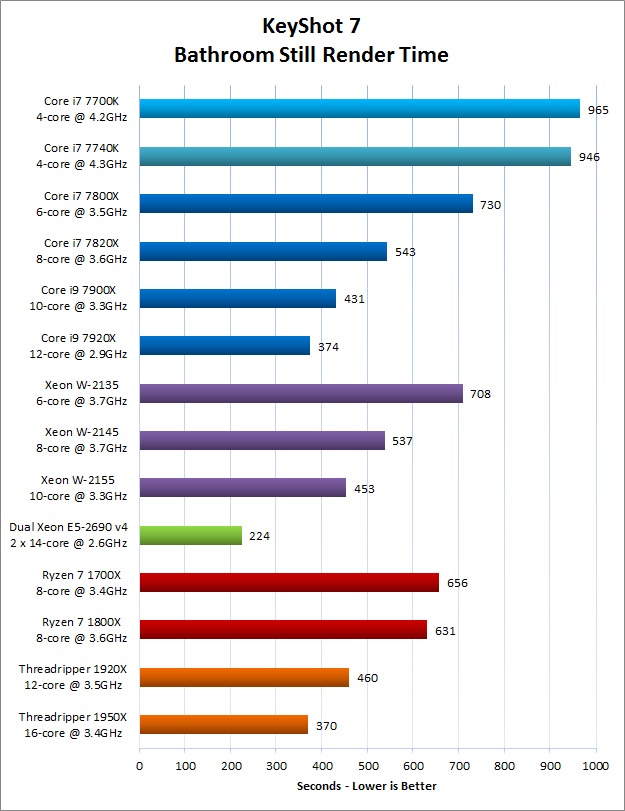 Since rendering in KeyShot is a heavily threaded application, there is a clear spread between the different processors based on core count. The dual Xeon, with a total of 28 cores, definitely wins out – but that is a much more expensive system and is really just included here as a point of reference. Among the single CPU workstations, AMD's 16-core 1950X is neck-and-neck with Intel's 12-core i9 7920X, though AMD's processor costs a bit less and is a hair faster. Next up are AMD's 12-core 1920X against Intel's 10-core i9 7900X and W-2155, with the Intel processors winning this matchup but again costing more. The rest of the processors fan out from there in accordance with the number of cores they have. 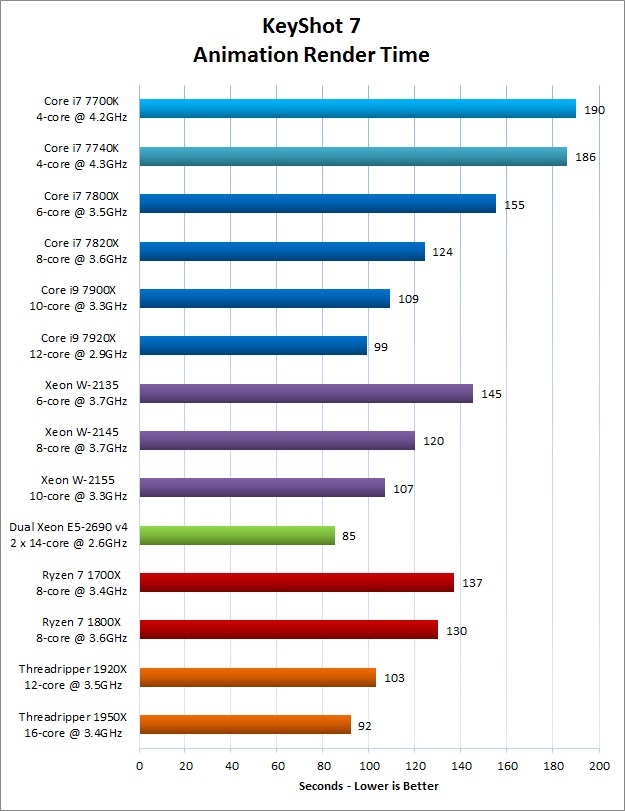 Our final KeyShot test looks at the time taken to render over a hundred images of a cube revolving and moving into a single video clip. The results here appear to be a little less spread out, likely meaning that more of the overall workflow is single-threaded, but AMD's Threadripper processors win out against Intel's Skylake X chips again.

Here is a summary of KeyShot 7 performance between just the top two Skylake X and Threadripper processors: 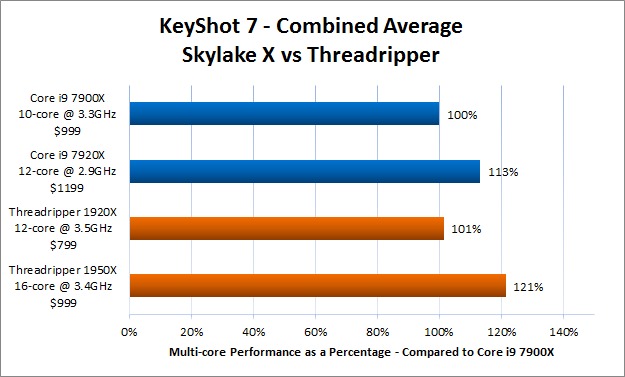 Based on these test results, and as of the writing of this article, Threadripper is clearly in the lead for CPU based rendering in KeyShot. The 16-core 1950X not only beats the 12-core i9 7920X, it also costs less. Looking to the near future, Intel's 14-18 core processors are likely to take back the performance lead – but will still cost more than AMD's offerings. We will test those when they become available and publish additional results at that time. We will also use this data to craft our recommended systems for KeyShot going forward.