On September 1st, NVIDIA announced the new GeForce RTX 30 series, touting major advancements in performance and efficiency. While gaming is almost always a major focus during these launches, professional applications – especially those in the content creation fields – is becoming increasingly important.

To see how the new GeForce RTX 3080 10GB and RTX 3090 24GB perform in real-world scenarios, we have reviews looking at a number of applications across rendering, game development, the Adobe Creative Cloud suite, and more. While this post includes a summary for each entry, we highly recommend reading the full article for programs you are interested in as we go into much greater detail in the individual reviews. 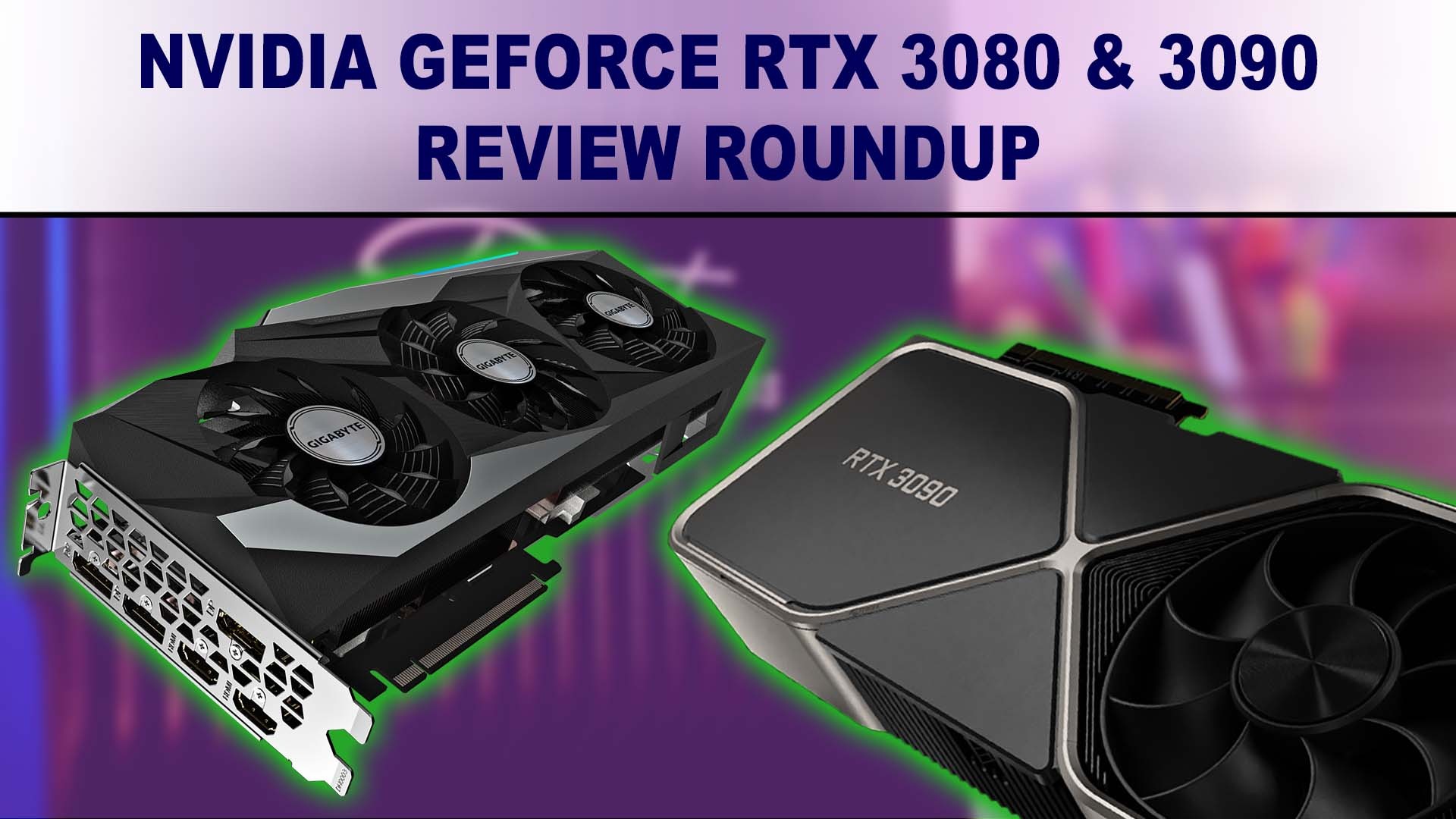 With the launch of the RTX 3090, we can update our previous NVIDIA GeForce RTX 3080 10GB Review Roundup article with results for the 3090, but since the RTX 3070 is not launching until sometime in October, we cannot include it at this time. However, we are very interested in how the RTX 3070 will perform, and when we are able to test that card, we will post follow-up articles with the results.

Summary: In virtually every test we performed, the RTX 3090 and 3080 outperformed both the Titan RTX and 2080 TI by a wide margin while costing significantly less. At 4k resolutions, the 3090 had an average 74% improvement in FPS over the Titan, and about 15% faster than the 3080. This roughly lines up with the CUDA Core count on each card. Some may look at the price difference between the 3080 and 3090 and question if the performance warrants it. The bigger deciding factor for creative professionals will be if they need the extra VRAM or not. 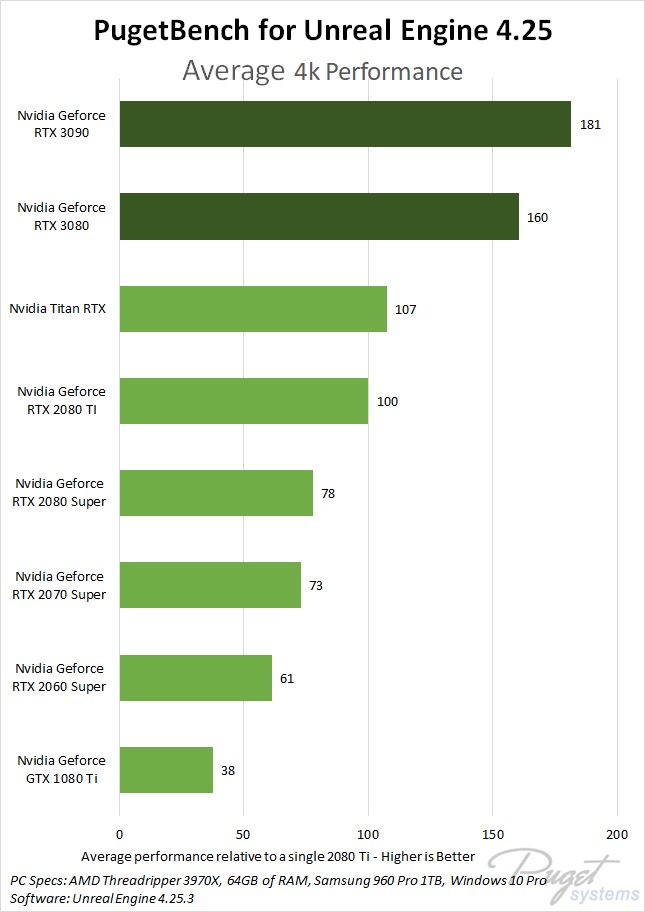 Summary: The GeForce RTX 3080 is a great GPU for Octane, and renders faster than any of the GeForce 20 Series cards, including the Titan RTX! It is roughly twice as fast as the RTX 2080 Super at the same price, with 25% more onboard RAM as well.

Rendering particularly complex scenes may not be doable with the RTX 3080's 10GB of memory, though, in which case the GeForce RTX 3090 provides roughly 20% faster performance and 140% more VRAM than the RTX 3080. Manufacturers like Gigabyte have announced single fan, blower-style RTX 3090 cards which should enable the use of multiple GPUs to further boost rendering speeds. 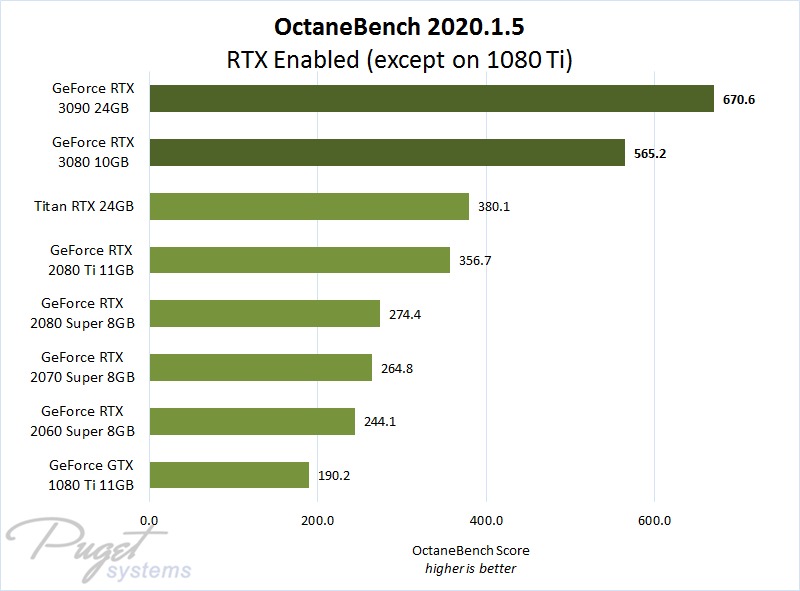 Summary: For those on a limited budget, and who only want (or have space for) a single video card, the GeForce RTX 3080 is a great GPU for Redshift. It renders more quickly than any 20 Series card and is nearly twice as fast as the RTX 2080 Super at the same price.

With more complex scenes and geometry the RTX 3080's 10GB of memory may limit performance, however, in which case the GeForce RTX 3090 provides 15% faster performance and 140% more VRAM than the RTX 3080. It should also be available in a dual-width, single-fan version from Gigabyte soon, which will allow for multiple GPUs in a single system and greatly increased overall performance. 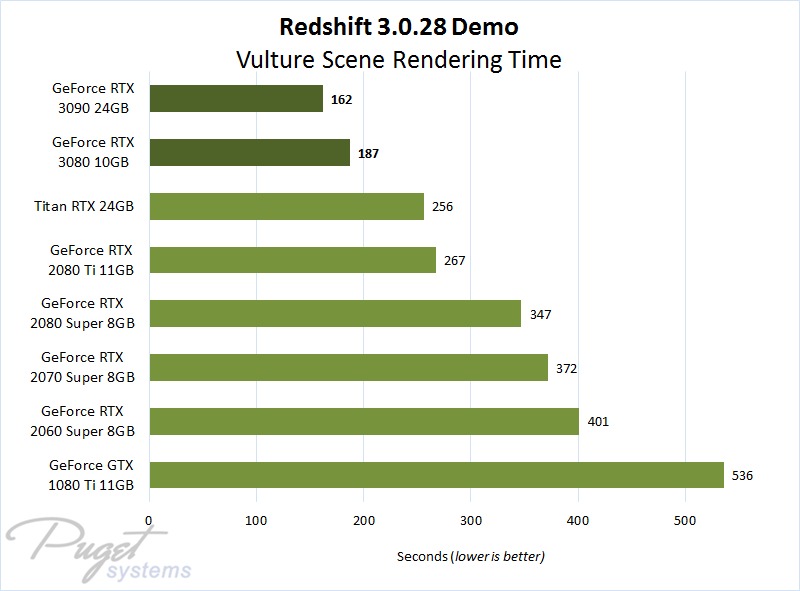 Summary: If you are operating on a budget, and only want a single video card in your workstation, then the GeForce RTX 3080 is a fantastic card for V-Ray rendering. It outperforms all 20 Series cards and is twice as fast as the RTX 2080 Super for the same price.

For rendering complex scenes the 10GB of memory on the RTX 3080 may be a problem, though, in which case the GeForce RTX 3090 provides 20% faster performance and 140% more VRAM (24GB). Gigabyte has announced a dual-width, single-fan version of the RTX 3090 as well, which should enable use of multiple GPUs in a workstation to take advantage of V-Ray's great performance scaling. 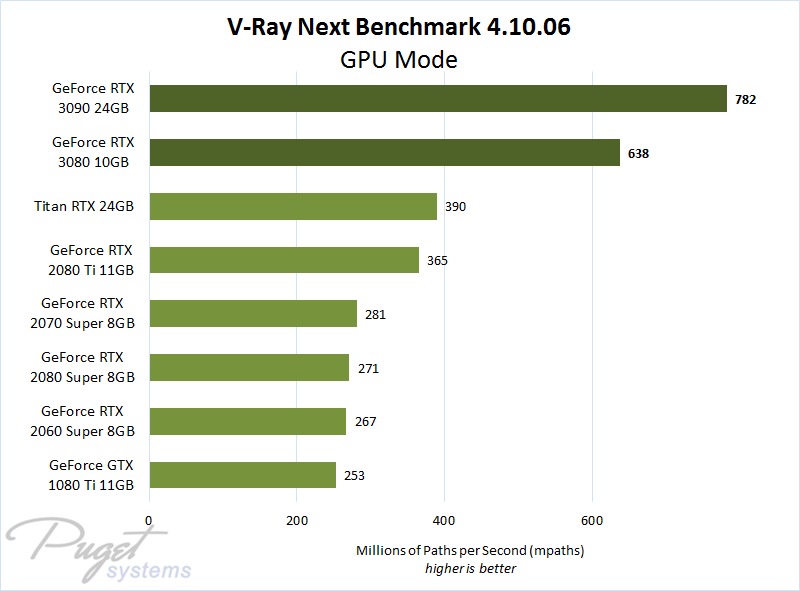 Summary: NVIDIA's GeForce RTX 3080 turned in excellent performance in our benchmark tests, effectively matching or beating the much more expensive Titan RTX! The RTX 3090 was a hair faster yet, but for its $800 higher price tag the speed boost is negligible. Similar performance for less than half the price makes GeForce RTX 3080 the best video card for RealityCapture at this time. 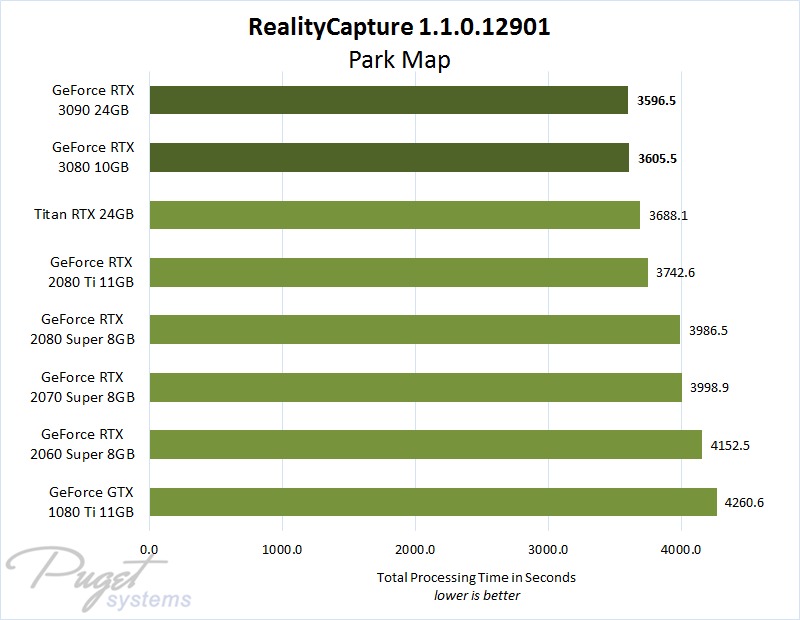 Summary: Both the NVIDIA GeForce RTX 3080 and 3090 perform well in Metashape! The RTX 3080 effectively matches or beats anything from the previous RTX 20 Series, including the Titan RTX, and the 3090 is another 1-2% faster in total processing times.

For most users, that means the RTX 3080 with nearly as fast of speeds but an $800 lower price tag will be the best choice. 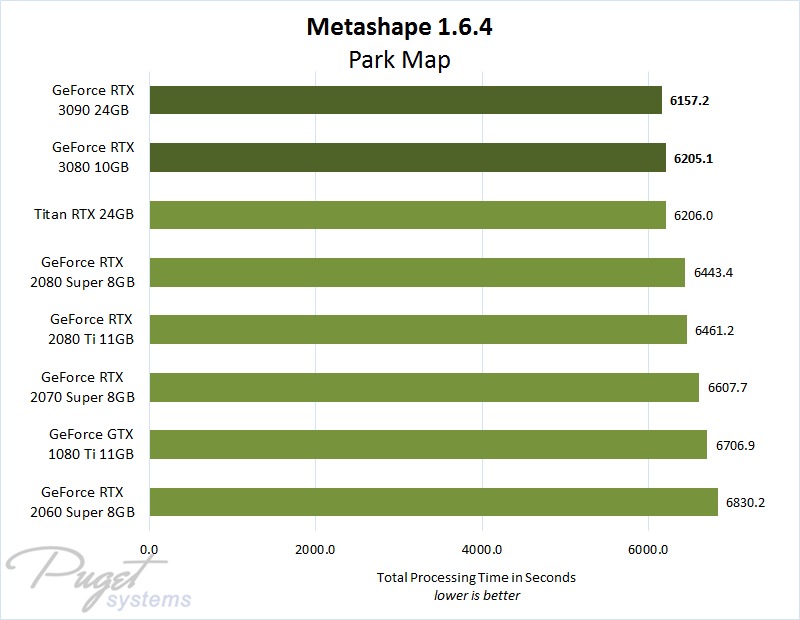 Summary: There isn't much difference between the cards we tested for this review, with all of them performing within 5% or less of each other. That indicates Pix4D is either CPU bound at this point or that the video card's utilization in this application is somewhat limited.

This means that the RTX 3080 and 3090 are a solid video cards for Pix4D, but if you already have a high-end GeForce 10 or 20 Series card then there is no reason to upgrade. There is also little cause to spend more on the RTX 3090 over the 3080 if you are buying or building a new Pix4D workstation, and the upcoming RTX 3070 is likely to offer very similar results at an even lower price. 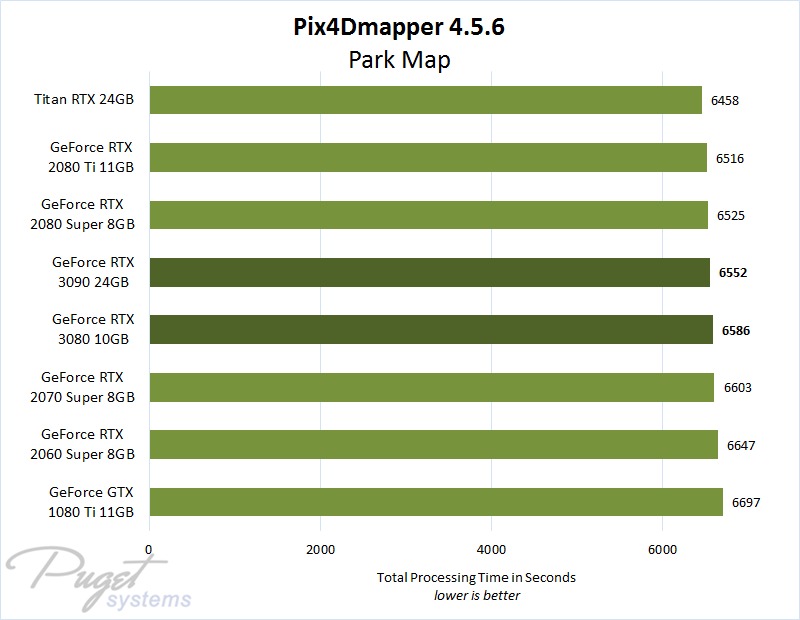 Summary: Overall, the new RTX 30-series cards do extremely well in DaVinci Resolve Studio. For the tasks that rely heavily on the GPU (noise reduction or using OpenFX primarily), the RTX 3080 is more than 60% faster than an RTX 2080 SUPER, while the RTX 3090 is 44% faster than a Titan RTX and within a few percent of two RTX 2080 Ti GPUs. Considering that a single RTX 3090 24GB has significantly more VRAM than 2x 2080 Ti 11Gb cards, and costs $1,000 less, that is an extremely impressive result from the 3090.

The issue is that the cooler design on the models currently available is designed strictly single GPU configurations. Whether you are looking at the Founders Edition cards from NVIDIA, or one of the various 3rd party designs, these cards are not going to work long-term in a multi-GPU setup. Once blower-style cards become available, the RTX 30-series cards should be an excellent option for a DaVinci Resolve workstation. 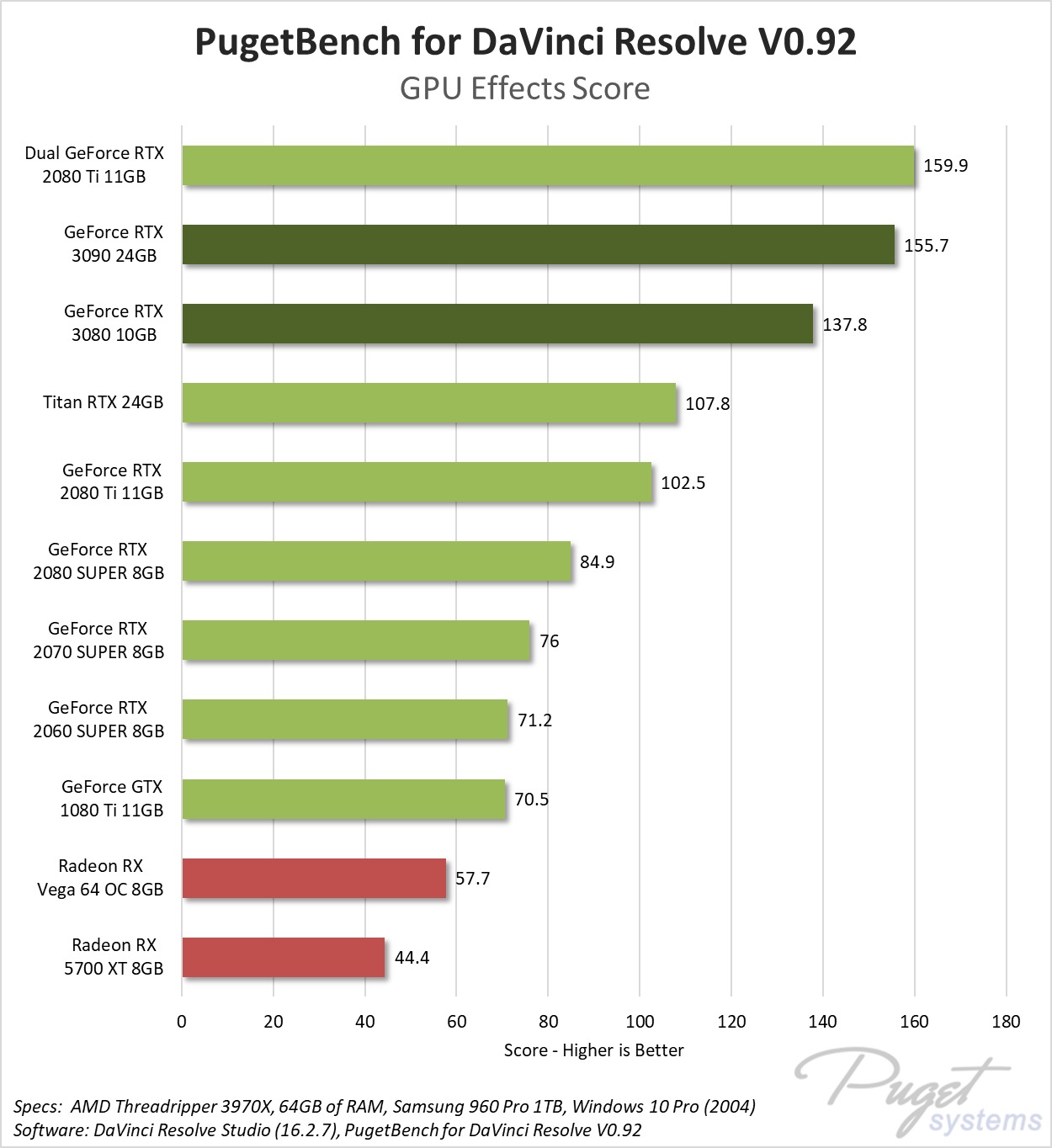 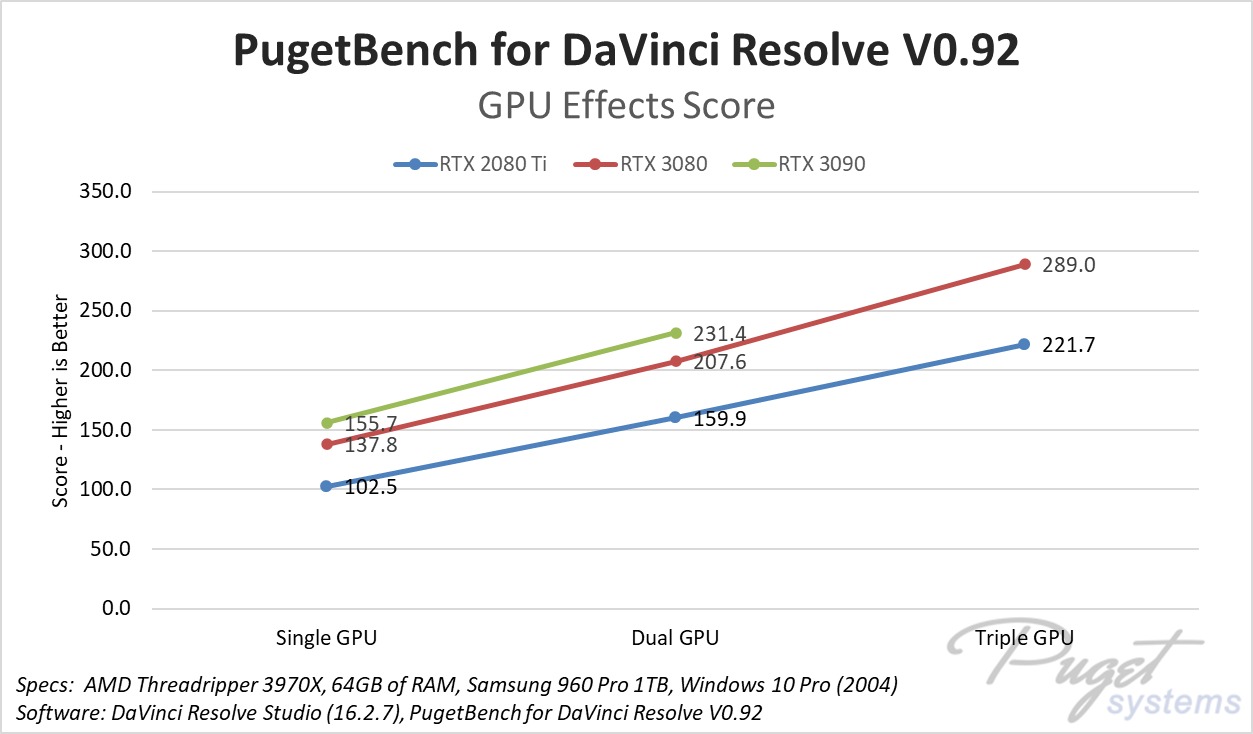 However, there is no appreciable difference between the RTX 3080 and the more expensive RTX 3090, so there is little reason to invest in the more expensive model. In fact, many users may want to wait to see how the RTX 3070 – launching mid October – will perform before purchasing a new workstation or upgrading their GPU. 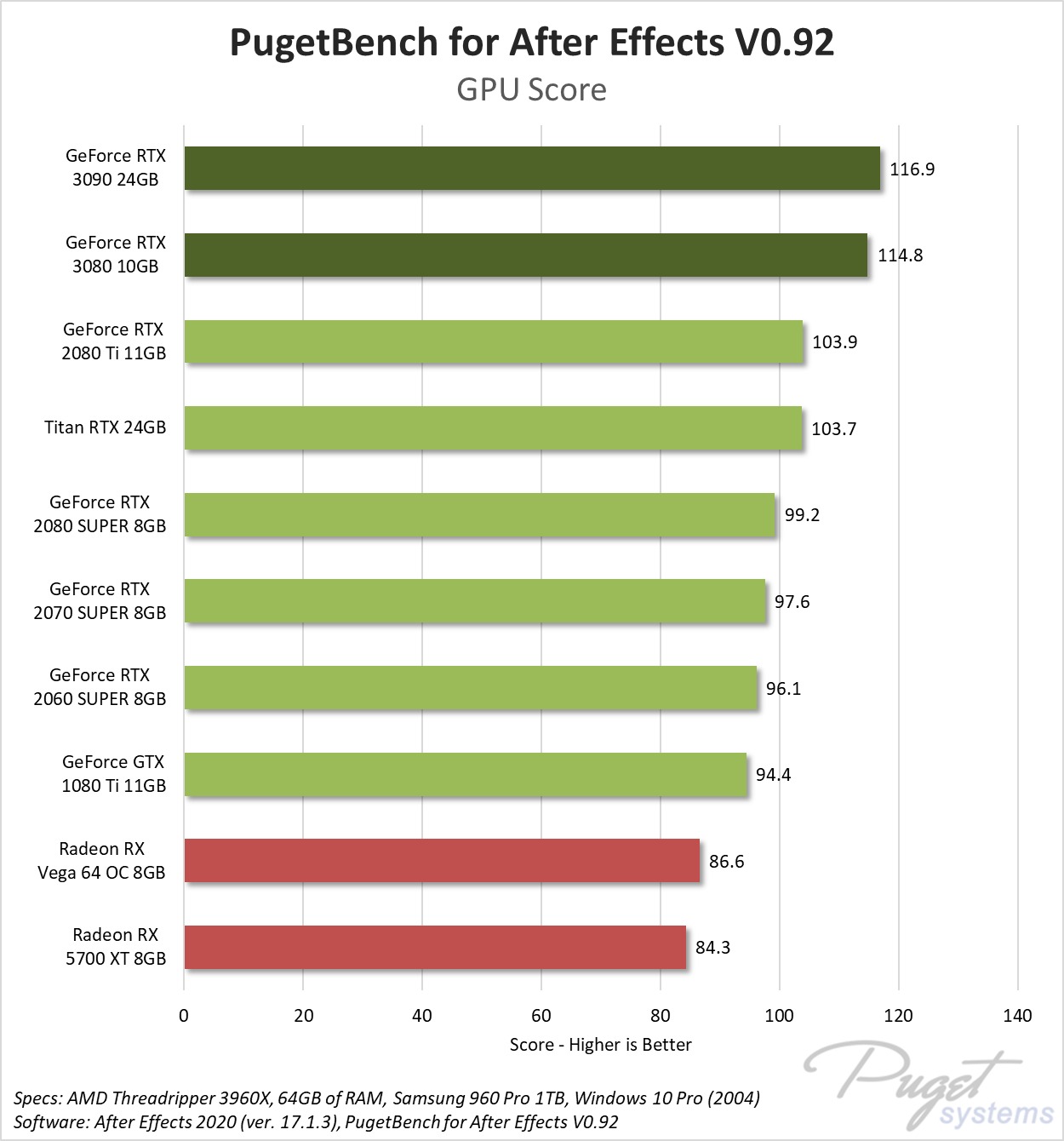 Summary: Although Photoshop has a number of GPU-accelerated effects that make it important to have a supported GPU, there is effectively no difference in performance between the various NVIDIA and AMD GPUs we tested. Having a GPU can give you up to a 50% boost in performance, but the new NVIDIA GeForce RTX 3080 10GB and RTX 3090 24GB are no faster than the RTX 2080 Ti, not to mention the RTX 2060 SUPER or even the older GTX 1080 Ti. 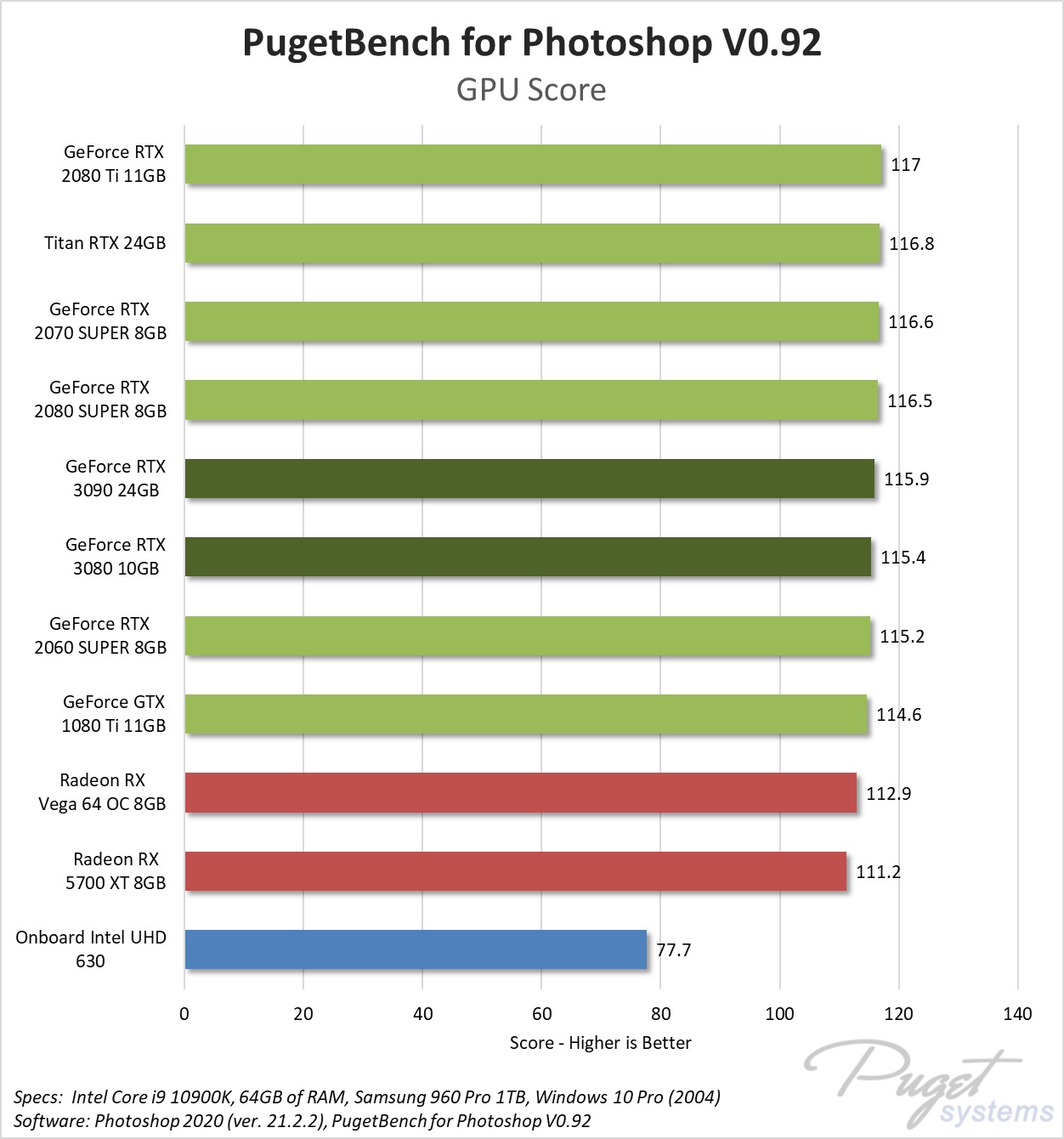 Summary: Adobe has been steadily adding GPU support into Lightroom Classic over the last few versions, but for the tasks we currently test, there is little advantage to using a powerful GPU like the new GeForce RTX 3080 10GB or 3090 24GB. In fact, there is almost no appreciable difference between the fastest GPU we tested, and having no GPU at all. 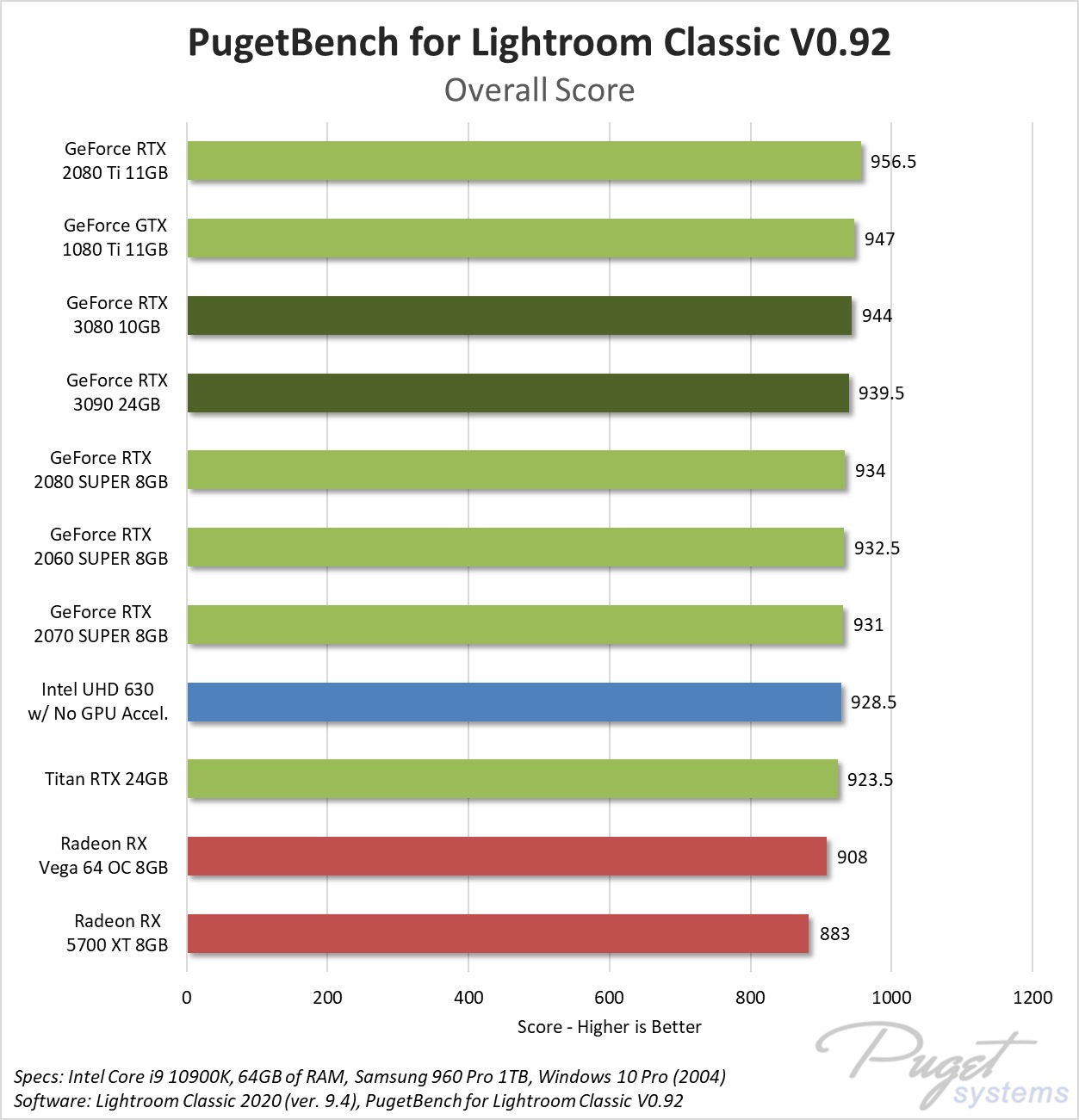 While the new NVIDIA GeForce RTX 30-series cards are certainly the most powerful GPUs ever released, it is important to understand that different applications utilize the GPU in very different ways.

Applications that are more CPU-focused like DaVinci Resolve or the Adobe Creative Cloud suite, however, have much more mixed results. In Resolve, the RTX 3080 can still be up to 35% faster than the 2080 Ti in certain situations, while the RTX 3090 is on par with a pair of RTX 2080 Ti cards. However, this drops to just a 10-20% performance gain in Premiere Pro and After Effects. And in Photoshop and Lightroom Classic where GPU acceleration is much less pronounced, there is very little performance gain to be had with either the new RTX 3080 or RTX 3090.

One thing to note is that multi-GPU configurations – which can be a major consideration for some of these applications – are still up in the air at the moment. Unlike the previous generation, these new cards (including all the third-party models we have seen so far) do not vent a significant portion of their heat directly outside the chassis which may mean that using more than 2 GPUs will not be feasible without a complex and expensive liquid cooling setup. This is something we will be testing in-depth in the coming weeks and months.

In addition, there is still the RTX 3070 model that has been announced but will not be available until sometime in October. Be sure to check back after that card launches for the latest information on how it performs in professional applications.