Both the NVIDIA GeForce RTX 3080 and 3090 perform well in Metashape! The RTX 3080 effectively matches or beats anything from the previous RTX 20 Series, including the Titan RTX, and the 3090 is another 1-2% faster in total processing times. For most users, that means the RTX 3080 with nearly as fast of speeds but an $800 lower price tag will be the best choice. 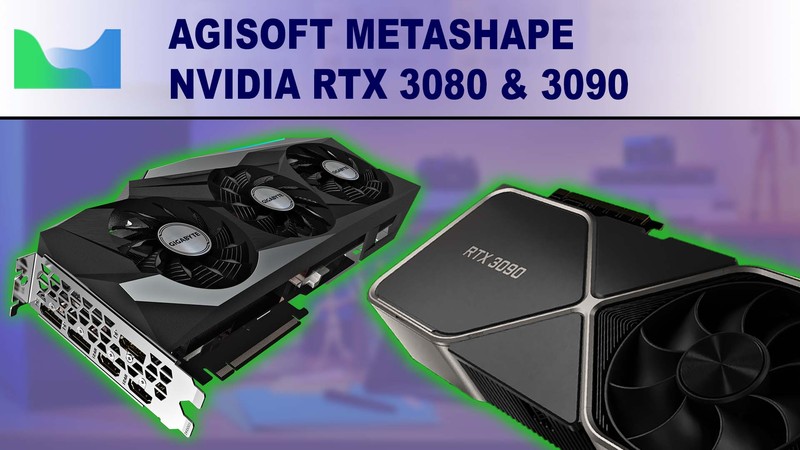 On September 1st, NVIDIA launched the new GeForce RTX 30 Series, touting major advancements in performance and efficiency. While gaming is almost always the media's focus during these kinds of launches, professional applications like Agisoft Metashape should see some improvements as well.

There is a potential downside to this product launch for Metashape, though. We have seen some benefits to running multiple video cards in past versions of Metashape (and PhotoScan that preceded it), but the new cooler design that NVIDIA has introduced on their Founders Edition RTX 3000-series cards is even worse for multi-card configurations than the last generation. Thankfully, Gigabyte has announced a single-fan, blower-style variants of the RTX 3090 - which should allow for workstations with multiple video cards and higher performance. When those cards are available, we will test how the RTX 30 Series scales in Metashape as more GPUs are added.

While specs don't always line up with real-world performance, it is a great sign that NVIDIA has roughly doubled the number of CUDA cores compared to the GeForce RTX 20 Series cards at similar price points. At the top-end of the new line, NVIDIA appears to have also combined the roles of the previous-gen RTX 2080 Ti and Titan RTX into the new RTX 3090. It has as much VRAM as the Titan did, but for $1,000 less - putting it in the same ballpark as the 2080 Ti, but with more than double the memory and CUDA cores.

*All the latest drivers, OS updates, BIOS, and firmware applied as of September 14th, 2020

Big thank you to Gigabyte for providing the GeForce RTX™ 3080 GAMING OC 10G sample used in our testing!

Here are charts showing the performance of the new GeForce RTX 3080 and 3090 compared to the other video cards we tested:

The overall spread in our smaller Metashape image sets isn't huge, with no more than 10% variance there between all the cards we tested, but if you are working with larger projects (hundreds or thousands of images) then the differences between GPUs become more pronounced. In our extended benchmark tests the NVIDIA GeForce RTX 3080 did very well, with almost identical performance to the much more expensive Titan RTX! The RTX 3090 was a hair faster even than that, but only saved 1-2% in overall processing times.

Looking exclusively at total project times tells just part of the story, though. If we dig into the details a bit, it becomes apparent that only certain steps within Metashape utilize the GPU - and thus benefit from faster video cards. Specifically, the Align Images, Build Depth Maps, and Built Texture phases are where the performance gains from one card to another come from. Here are charts from our School Model and Park Map tests showing the gains in those individual processing steps:

In these breakdowns we can see that the new RTX 30 Series cards gain the most ground in the Align Images step, where they are clearly in the lead. In Build Depth Maps and Build Texture the older Titan RTX and RTX 2080 Ti maintain strong performance, and an argument could be made that for Depth Maps exclusively the Titan RTX is still the fastest option... but is that worth the added $1000?

For those who want all the details, we have also compiled a table showing the individual times for each step of every project: 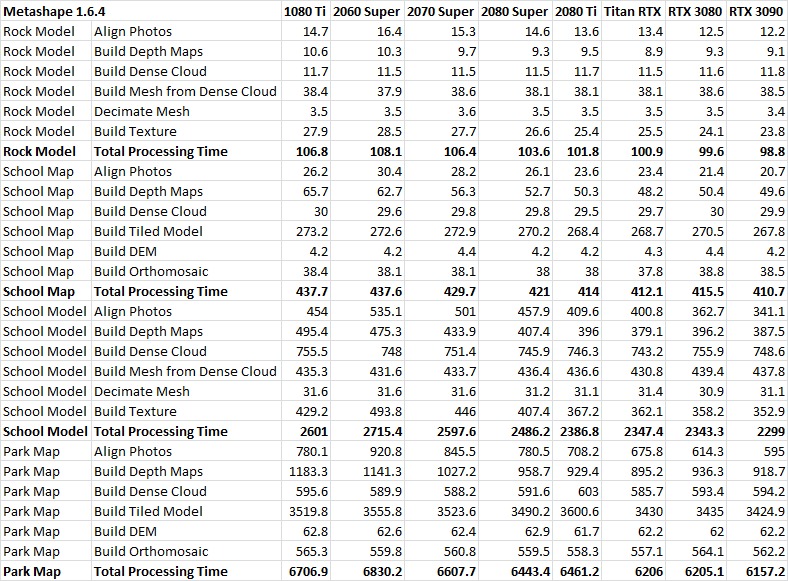 Yes, both the RTX 3080 and 3090 perform well in Metashape! The RTX 3080 effectively matches or beats anything from the previous RTX 20 Series, including the Titan RTX, and the 3090 is another 1-2% faster in total processing times. For most users, that means the RTX 3080 with nearly as fast of speeds but an $800 lower price tag will be the best choice. Keep an eye out for our review of the upcoming RTX 3070 too, as it may end up offing a similar price:performance ratio. Later on we will also look into whether multi-GPU configurations are viable with this new generation of GeForce cards, and if so whether they provide any benefit for Metashape.

As always, please keep in mind that these results are strictly for photogrammetry in Agisoft Metashape. If you have performance concerns for other applications in your workflow, we highly recommend checking out our Hardware Articles (you can filter by "Video Card") for the latest information on how a wide range of programs perform with various GPUs, CPUs, and other hardware.