On September 1st, NVIDIA announced the new GeForce RTX 3000-series, touting major advancements in performance and efficiency. While gaming is almost always a major focus during these launches, professional applications - especially those in the content creation fields - is becoming increasingly important.

To see how the new GeForce RTX 3070 8GB, RTX 3080 10GB and RTX 3090 24GB perform in real-world scenarios, we have reviews looking at a number of applications across rendering, game development, the Adobe Creative Cloud suite, and more. While this post includes a summary for each entry, we highly recommend reading the full article for programs you are interested in as we go into much greater detail in the individual reviews.

Summary: In virtually every test we performed, the RTX 3090 and 3080 outperformed both the Titan RTX and 2080 TI by a wide margin while costing significantly less. At 4k resolutions, the 3090 had an average 74% improvement in FPS over the Titan, and about 15% faster than the 3080. This roughly lines up with the CUDA Core count on each card. Some may look at the price difference between the 3080 and 3090 and question if the performance warrants it. The bigger deciding factor for creative professionals will be if they need the extra VRAM or not. Meanwhile, the 3070 is neck and neck with the 2080 Ti as long as VRAM is not a limiting factor, while costing half as much. 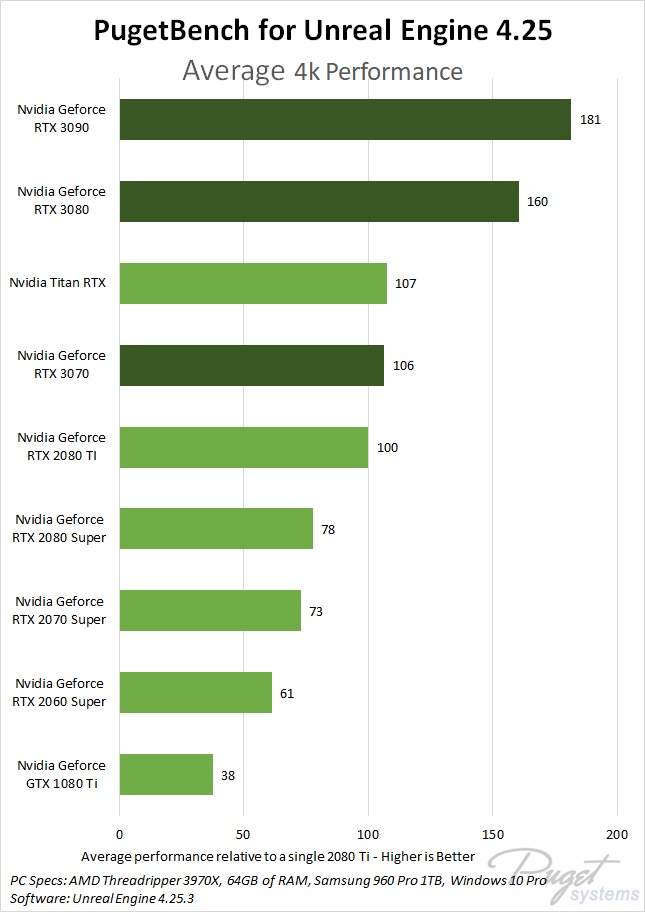 Summary: The raw performance of these new GeForce RTX cards is amazing in OctaneRender. Both the RTX 3070 and 3080 provide similar performance per dollar, but the 3080's 25% additional VRAM makes it the better value. Folks who need the fastest rendering times, though, will want the GeForce RTX 3090's top-tier performance and its 24GB of onboard memory for working on complex scenes with more detailed geometry & textures. 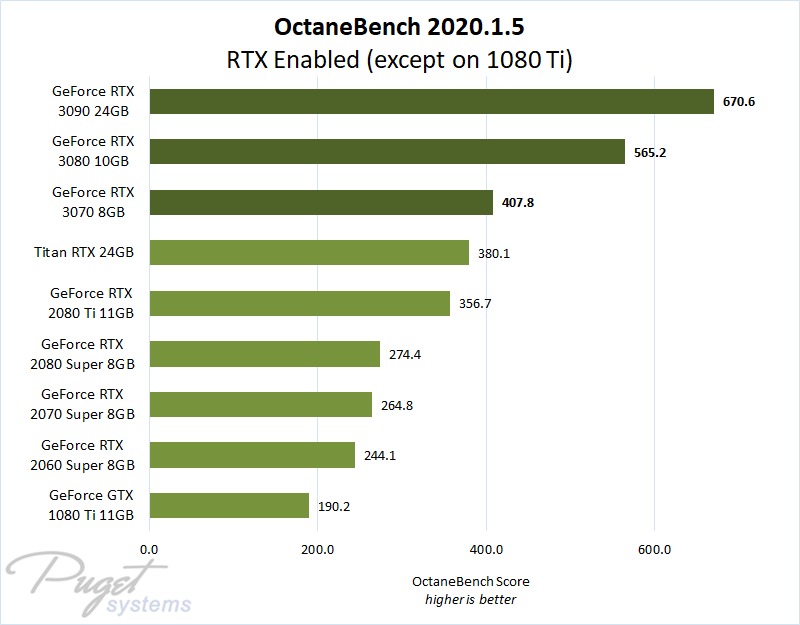 Summary: The rendering performance of the new GeForce RTX 30 Series cards is amazing. Both the RTX 3070 and 3080 offer roughly equal price:performance, but the 3080's 25% increased onboard memory makes it a better overall value. For those wanting the fastest rendering times, though, the GeForce RTX 3090 offers the top performance - and its 24GB of VRAM will be much better for dealing with more complex scenes. 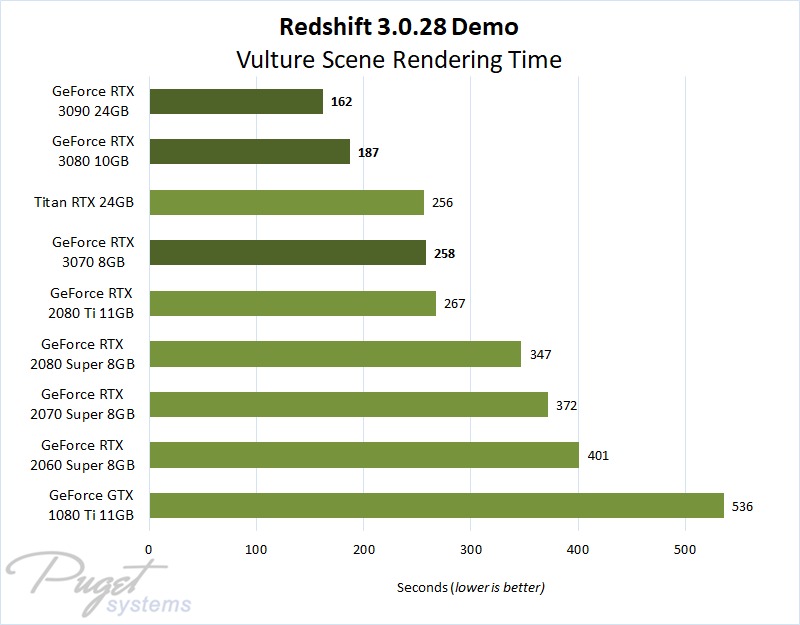 Summary: The new GeForce RTX 30 Series video cards provide fantastic rendering speeds. The RTX 3070 and 3080 offer comparable performance for their respective prices, but the 3080's additional 25% of onboard VRAM makes it a better choice for most users. Those wanting the fastest rendering times, or working with complex scenes, will appreciate the GeForce RTX 3090's top performance, its massive 24GB of memory, and better support for multi-GPU configurations (via NVLink and variants with rear-exhaust coolers). 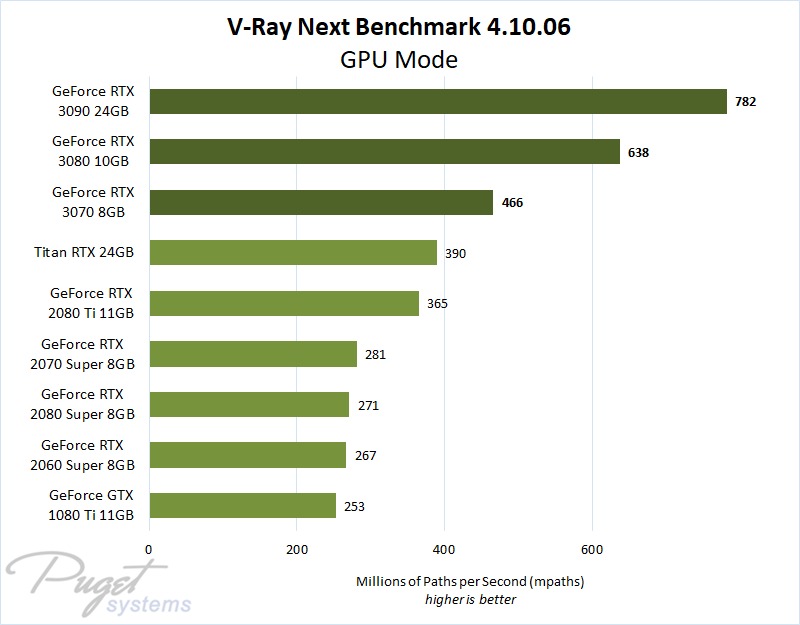 Summary: NVIDIA's GeForce RTX 3080 turned in excellent performance in our benchmark tests, effectively matching or beating the much more expensive Titan RTX. The RTX 3090 is a hair faster yet, but for the additional $800 it costs the processing speed boost is negligible. The RTX 3070 did well too, but was measurably behind the bigger cards. Similar performance to the RTX 3090 for less than half the price makes GeForce RTX 3080 the best video card for RealityCapture at this time. 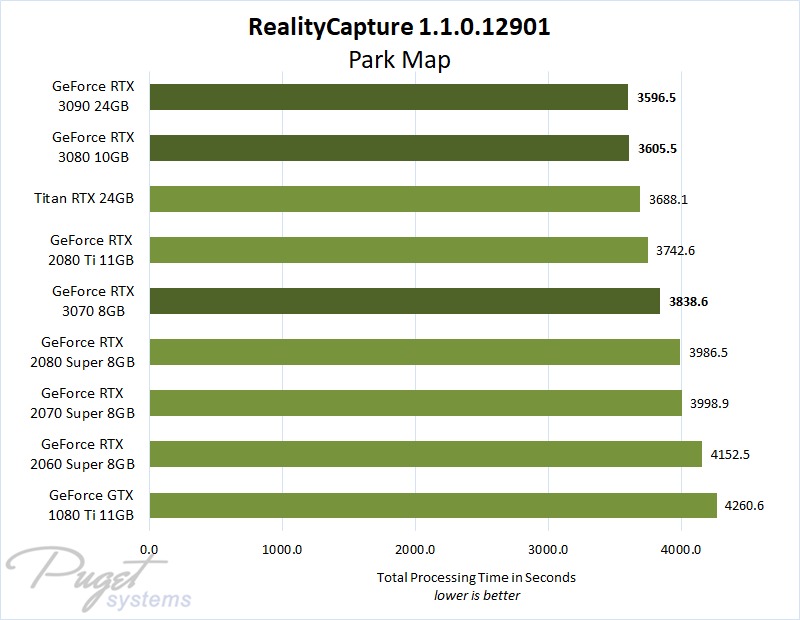 Summary: The NVIDIA GeForce RTX 3070, 3080, and 3090 all perform well in Metashape. The RTX 3080 effectively matches or beats anything from the previous RTX 20 Series, including the Titan RTX, and the 3090 is another 1-2% faster in total processing times. The RTX 3070 is only a little slower, and a solid option for those wanting to save some money. For most users, though, the RTX 3080 will offer the best combination of speed and price. 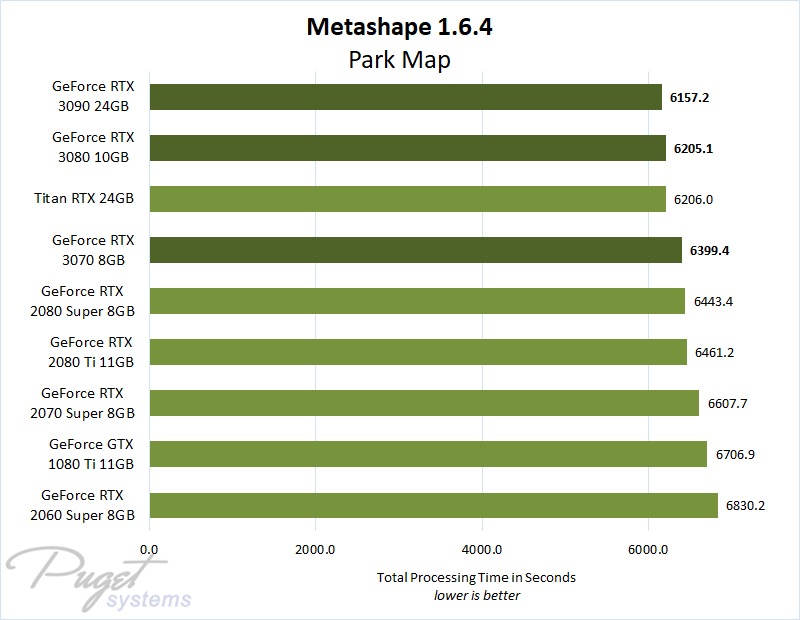 Summary: There isn't much of a difference between the cards we tested for this review, with all of them performing within 5% or less of each other. That indicates that either Pix4D is CPU bound at this point or else the video card's utilization in this application is limited.

The RTX 3080 and 3090 offer fine performance in Pix4D, but the much cheaper GeForce RTX 3070 is just as fast in this application - so it is going to be the best choice for most users. If you already have a high-end GeForce 10 or 20 Series card, however, there is no reason to upgrade. 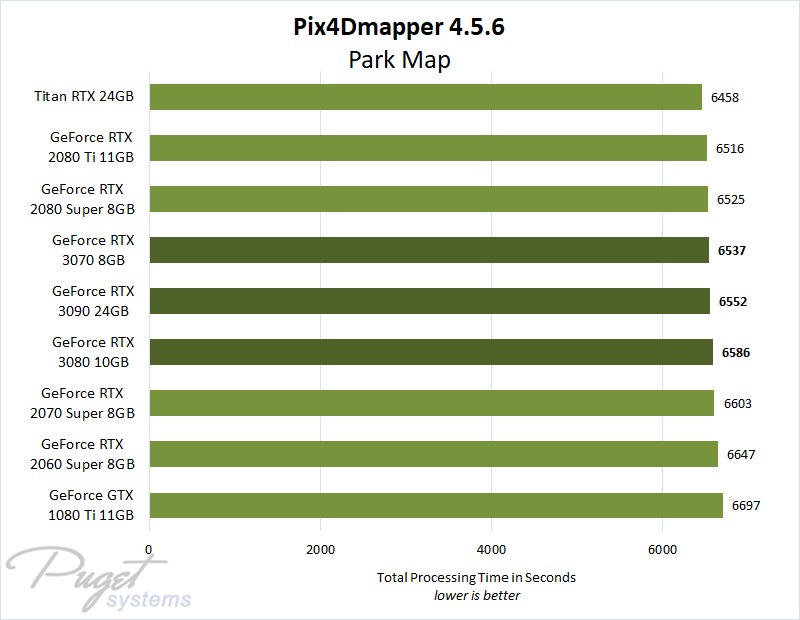 Summary: Overall, the new RTX 3000-series cards do extremely well in DaVinci Resolve Studio. For the tasks that rely heavily on the GPU (primarily noise reduction and OpenFX), the RTX 3080 is more than 60% faster than an RTX 2080 SUPER, while the RTX 3090 is 44% faster than a Titan RTX and within a few percent of two RTX 2080 Ti GPUs. The RTX 3070 is a bit less impressive, but still beats the RTX 2070 SUPER by a solid 22%. No matter how you slice it, a 20-60% performance gain in one generation is very impressive, and likely to result in a significant number of Resolve users upgrading their GPUs as soon as they can.

The issue is that the cooler design on the models currently available is designed strictly single GPU configurations. Whether you are looking at the Founders Edition cards from NVIDIA, or one of the various 3rd party designs, these cards are not going to work long-term in a multi-GPU setup. Once blower-style cards become available, the RTX 30-series cards should be an excellent option for a DaVinci Resolve workstation with multiple GPUs. 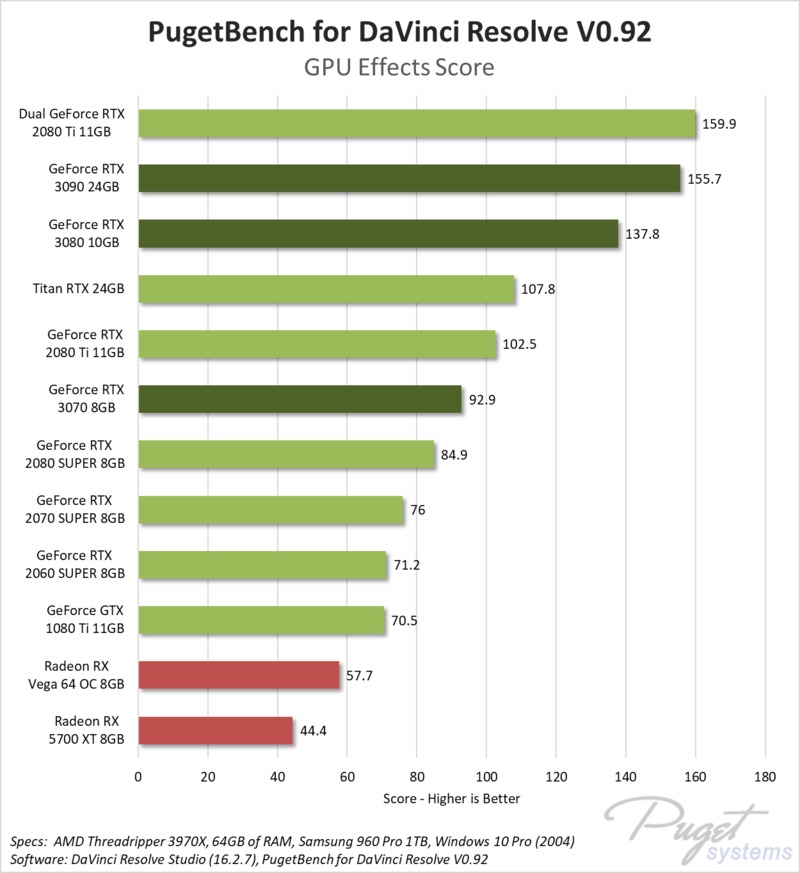 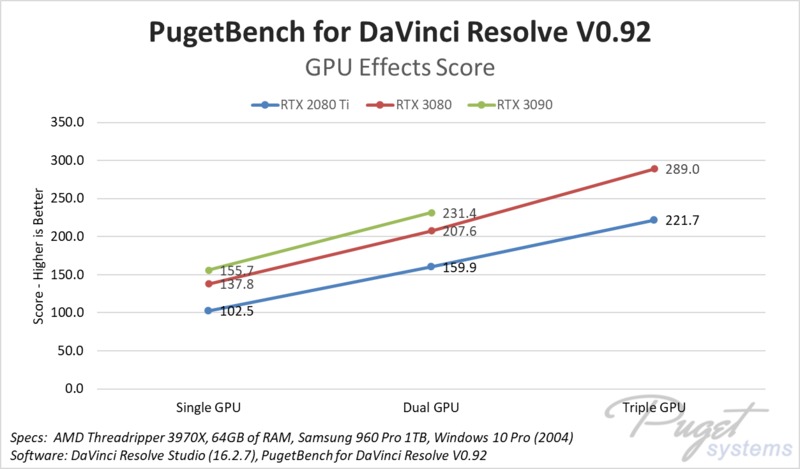 Summary: While the average editor likely won't notice much of a difference with the new NVIDIA GeForce RTX 3070, 3080 or 3090 video cards, in certain situations they can provide a healthy boost to performance. In an ideal situation where you are using multiple GPU-accelerated effects, the RTX 3000-series cards are anywhere from 10% to 20% faster than the similarly-priced models from the previous generation. This is enough to make both the RTX 3080 and 3090 easily the fastest GPUs we have tested for Premiere Pro regardless of price. 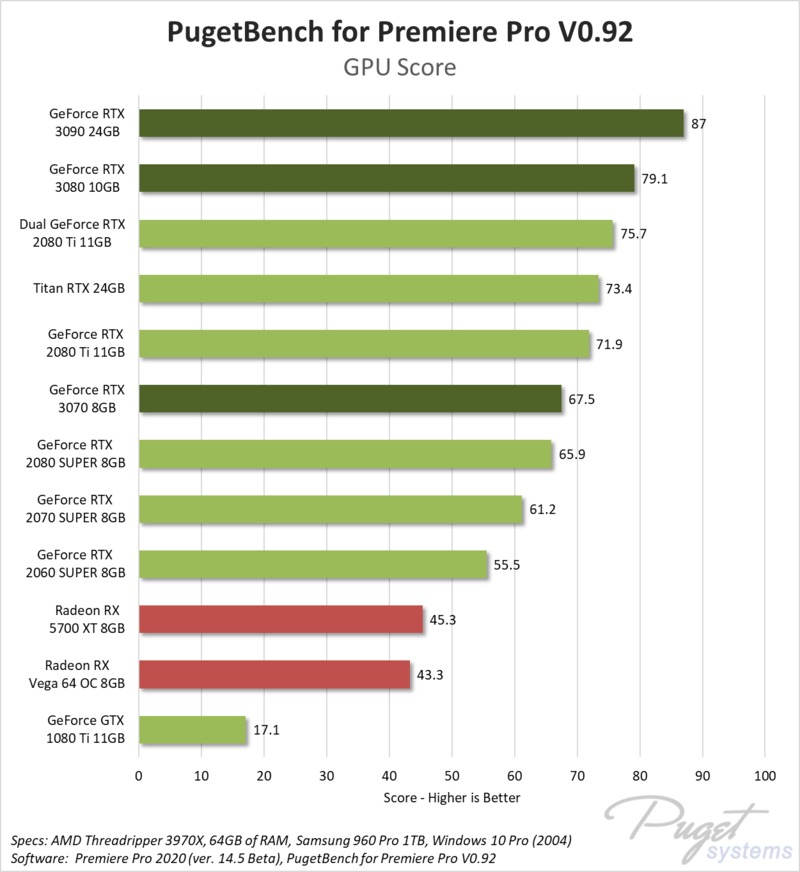 Summary: For most users, After Effects is going to be CPU bottlenecked long before the performance of your GPU comes into play. However, in certain After Effects workloads, the new GeForce RTX 3070, 3080 and RTX 3090 can be around 6-12% faster than the previous generation RTX 2080 Ti, or 27-35% faster than the AMD Radeon cards that are currently available.

However, there is no appreciable difference between the RTX 3080 and the more expensive RTX 3090, so there is little reason to invest in the more expensive RTX 3090. In fact, there is also only a small 5% difference between the RTX 3080 and RTX 3070, which may prompt many to stick with the RTX 3070 and invest the cost savings into a faster CPU, more RAM, or other system upgrades. 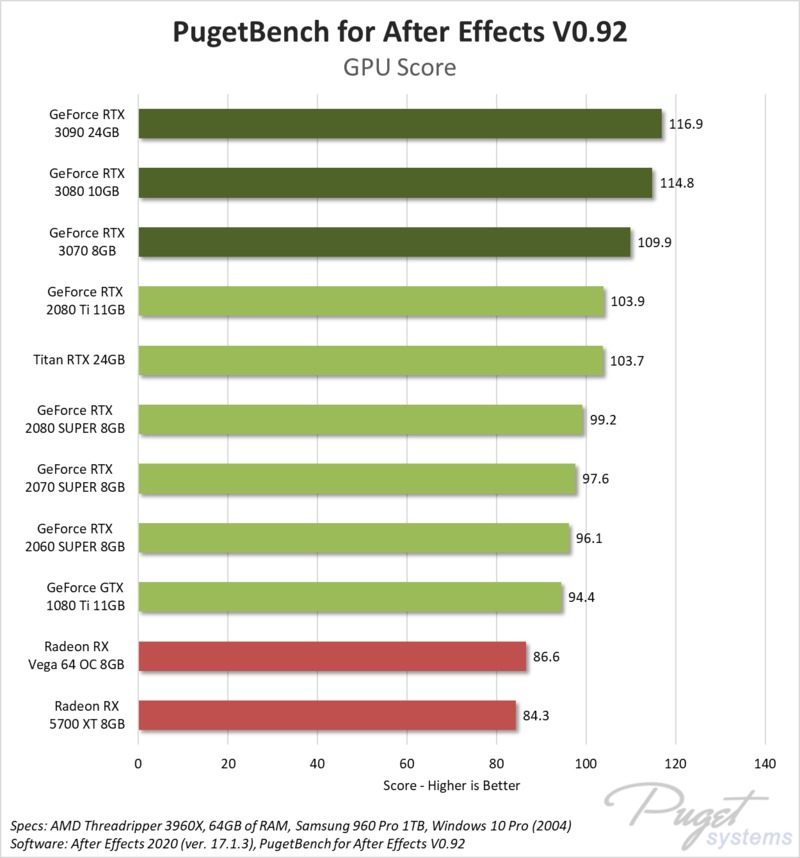 Summary: Although Photoshop has a number of GPU-accelerated effects that make it important to have a supported GPU, there is effectively no difference in performance between the various NVIDIA and AMD GPUs we tested. Having a GPU can give you up to a 50% boost in performance, but the new NVIDIA GeForce RTX 3070 8GB, 3080 10GB and RTX 3090 24GB are no faster than the RTX 2080 Ti, not to mention the RTX 2060 SUPER or even the older GTX 1080 Ti. 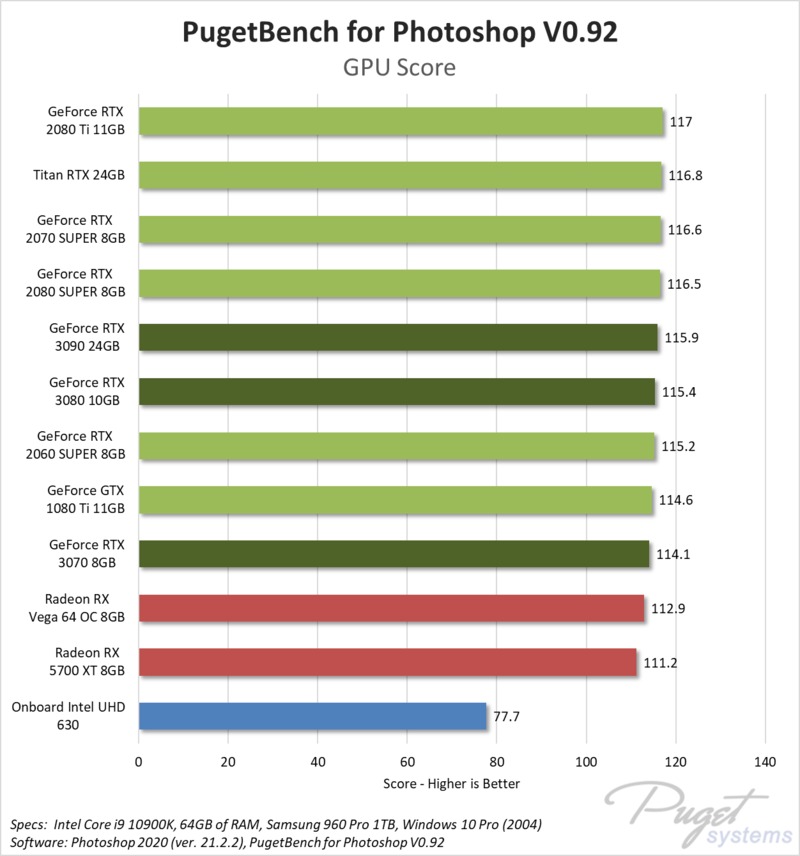 Summary: Adobe has been steadily adding GPU support into Lightroom Classic over the last few versions, but for the tasks we currently test, there is little advantage to using a powerful GPU like the new GeForce RTX 3070 8GB, 3080 10GB or 3090 24GB. In fact, there is almost no appreciable difference between the fastest GPU we tested and having no GPU at all. 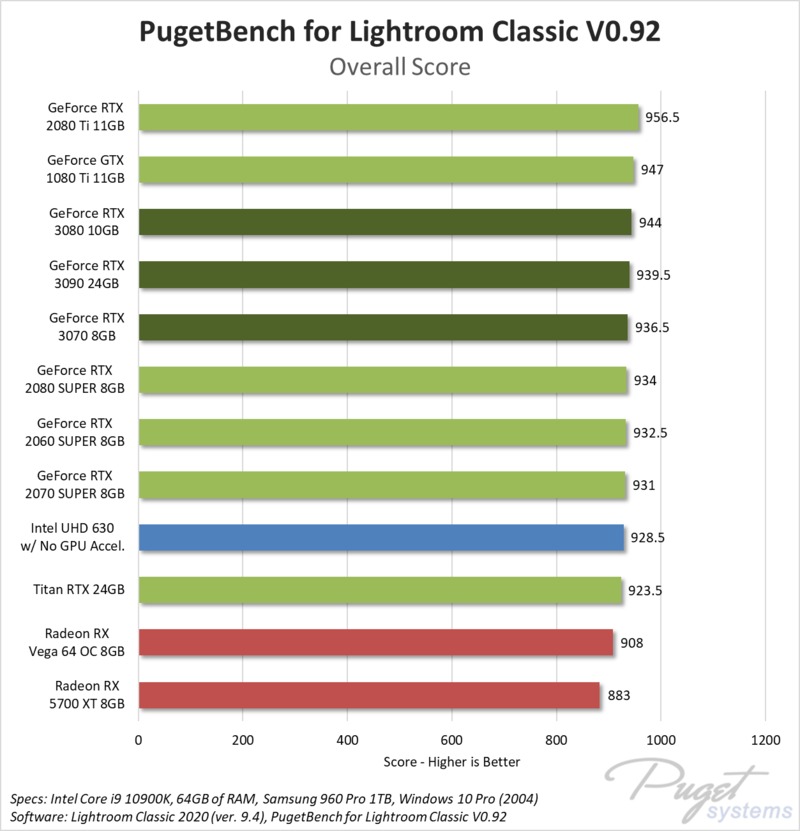 While the new NVIDIA GeForce RTX 3000-series cards are certainly the most powerful GPUs ever released, it is important to understand that different applications utilize the GPU in very different ways.

In GPU render engines like OctaneRender, Redshift, and V-Ray, the RTX 3080 and 3090 greatly out-perform the RTX 2000-series cards, beating the previous generation RTX 2080 Ti by a large 60% and 90% respectively. Even the affordably-priced RTX 3070 matched or beat the 2080 Ti and Titan RTX, though its 8GB of VRAM will limit how large of scenes it will be capable of rendering. Unreal Engine also saw massive performance gains, averaging 60-80% higher performance gains over the RTX 2080 Ti.

Applications that are more CPU-limited like DaVinci Resolve or the Adobe Creative Cloud suite, however, have more mixed results. In DaVinci Resolve, the RTX 3080 can still be up to 35% faster than the RTX 2080 Ti in certain situations, while the RTX 3090 is just about on par with a pair of RTX 2080 Ti cards. The RTX 3070 is a bit less impressive, but it still out-performs the RTX 2070 SUPER by a solid 20%. However, these performance gains drop to just 10-20% in Premiere Pro and After Effects, and almost nothing in Photoshop and Lightroom Classic where GPU acceleration is far less pronounced.

One thing to note is that multi-GPU configurations - which can be a major consideration for some of these applications - are still up in the air at the moment. Unlike the previous generation, these new cards (including almost all the third-party models we have seen so far) do not vent a significant portion of their heat directly outside the chassis which may mean that using more than 2 GPUs will not be feasible without a complex and expensive liquid cooling setup. Gigabyte has recently launched a blower-style RTX 3090 that looks like it should work well in triple GPU configurations, although the high power draw will exclude quad GPU configurations for most users as the system would require more power than is available from most standard outlets. You can read more about this in our Quad GeForce RTX 3090 in a desktop - Does it work? article.

Overall, these new RTX 3000-series cards are a great improvement over the previous generation and (for now) further extend NVIDIA's lead over AMD in these types of workloads. In any application that puts a significant load on the GPU, the performance is significantly higher with these cards, and the $1,499 price tag of the RTX 3090 24GB is far more palatable for most users than the $2,499 that the Titan RTX was priced at.

If you are looking for a workstation with one of these GPUs, be sure to visit our solutions page to view our recommended workstations for various software packages, our custom configuration page, or contact one of our technology consultants.