AMD has been a strong choice for DaVinci Resolve Studio ever since the launch of the 3rd generation Ryzen and Threadripper CPUs due to their higher core counts and inclusion of PCI-E gen 4. Interestingly, the new AMD Ryzen 5000-series processors are not much faster than the previous generation. But, it is enough for AMD to extend their lead over Intel.

Ever since the launch of their 3rd generation Ryzen and Threadripper processors, AMD processors have been a strong choice for DaVinci Resolve Studio. Not only is Resolve able to utilize a decent number of CPU cores, but because of how heavily it leverages the GPU, having a platform with PCI-E 4.0 can make a measurable impact on performance. Since Intel CPUs tend to have fewer CPU cores and are still using PCI-E 3.0, this means that any performance gain we might see with AMD's new Ryzen 5000-series CPUs should only serve to further AMD's lead.

These Ryzen 5000-series processors do not have any more cores compared to the previous generation Ryzen 3000-series, but among other things, AMD is touting a 19% IPC (instructions per clock) improvement. In theory, this could translate to almost a 20% performance increase over the previous generation, although it will likely heavily depend on the application. 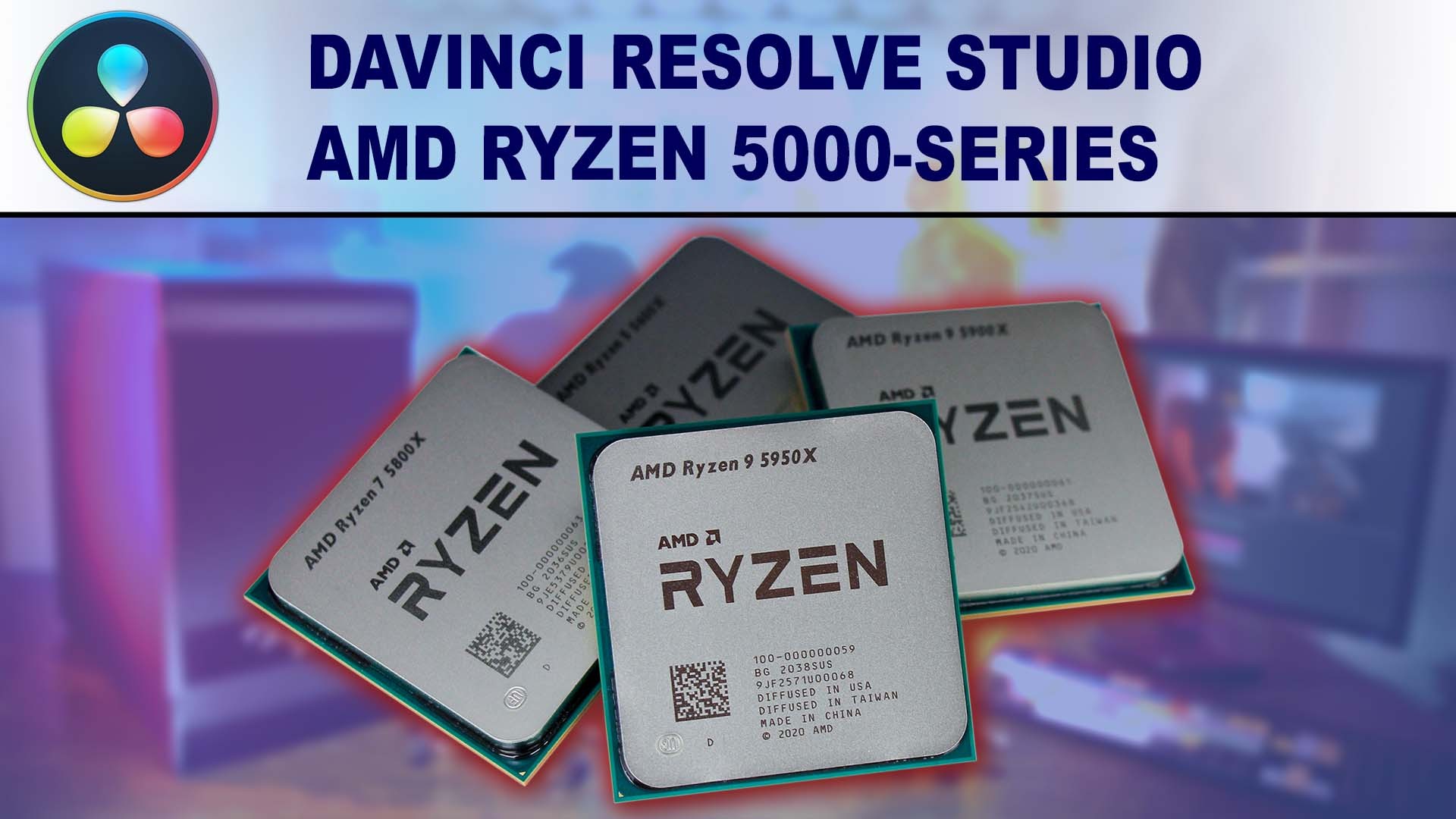 In this article, we will be examining the performance of the new AMD Ryzen 5600X, 5800X, 5900X, and 5950X in DaVinci Resolve Studio compared to a range of CPUs including the Intel 10th Gen, Intel X-10000 Series, AMD Threadripper 3rd Gen, and the previous generation AMD Ryzen 3000-series processors. If you are interested in how these processors compare in other applications, we also have other articles for Premiere Pro, After Effects, Lightroom Classic, Photoshop, and several other applications available on our article listing page.

In order to see how each of these configurations performs in Premiere Pro, we will be using our PugetBench for DaVinci Resolve V0.92 benchmark and DaVinci Resolve Studio version 16.2.7. This version of the benchmark is not yet available to the public, but since the tests are much better than the version that you can currently download, we opted to go ahead and use it for this comparison.

Feel free to skip to the next sections for our analysis of these results to get a wider view of how each configuration performs in DaVinci Resolve Studio. 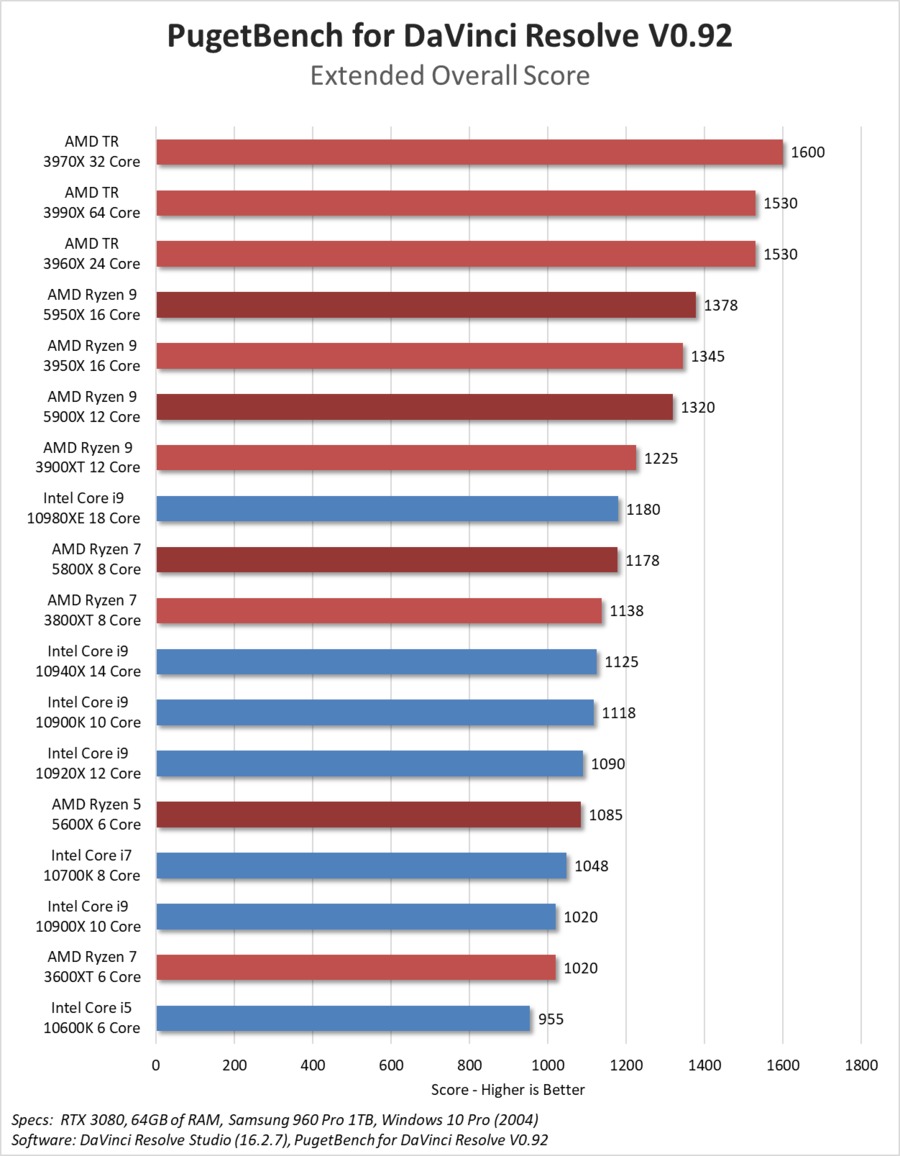 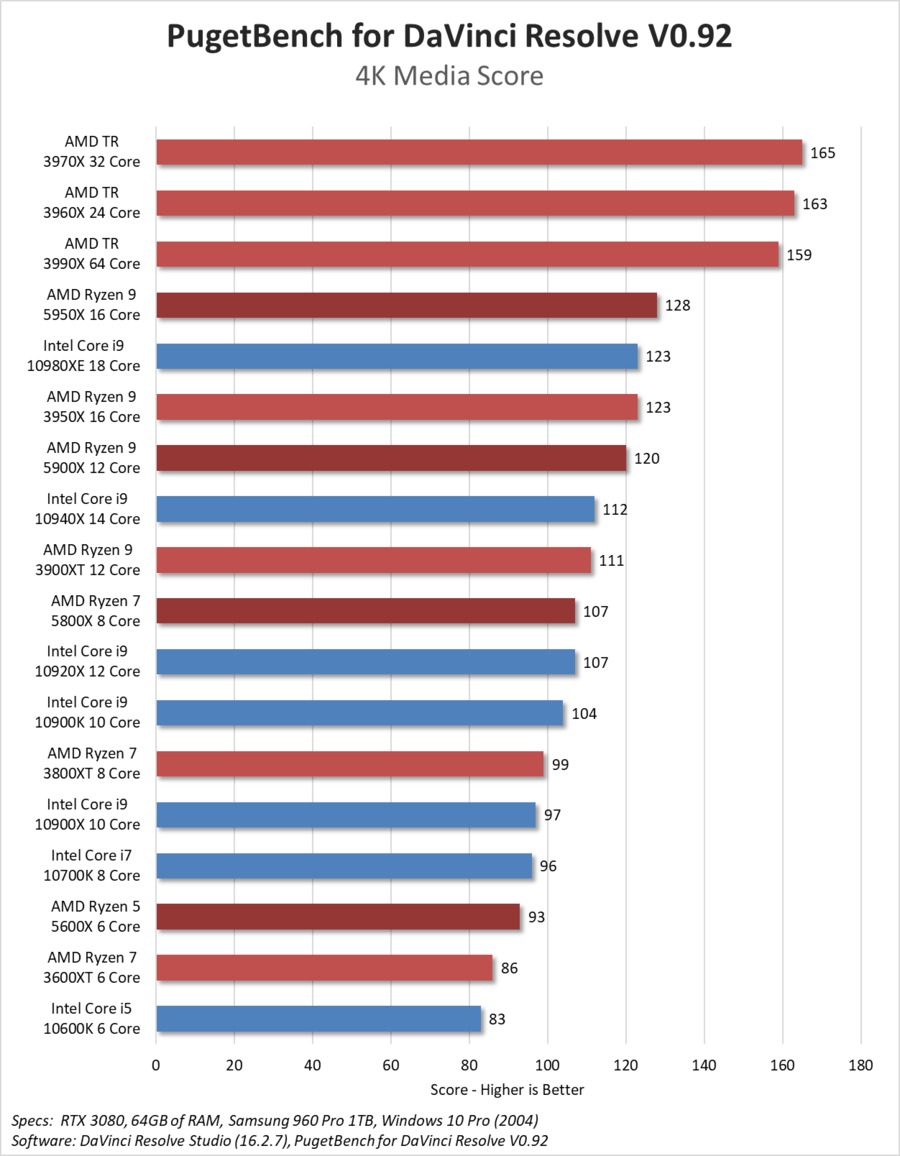 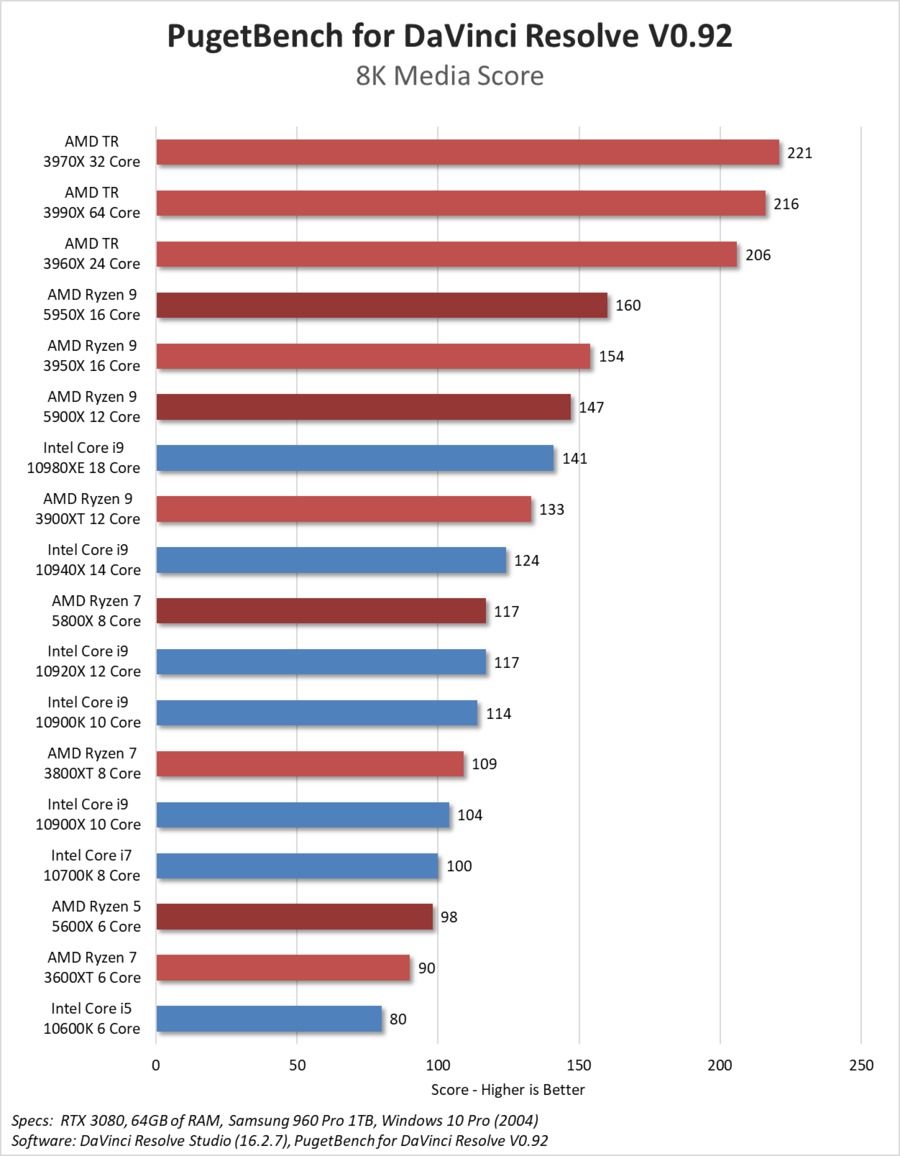 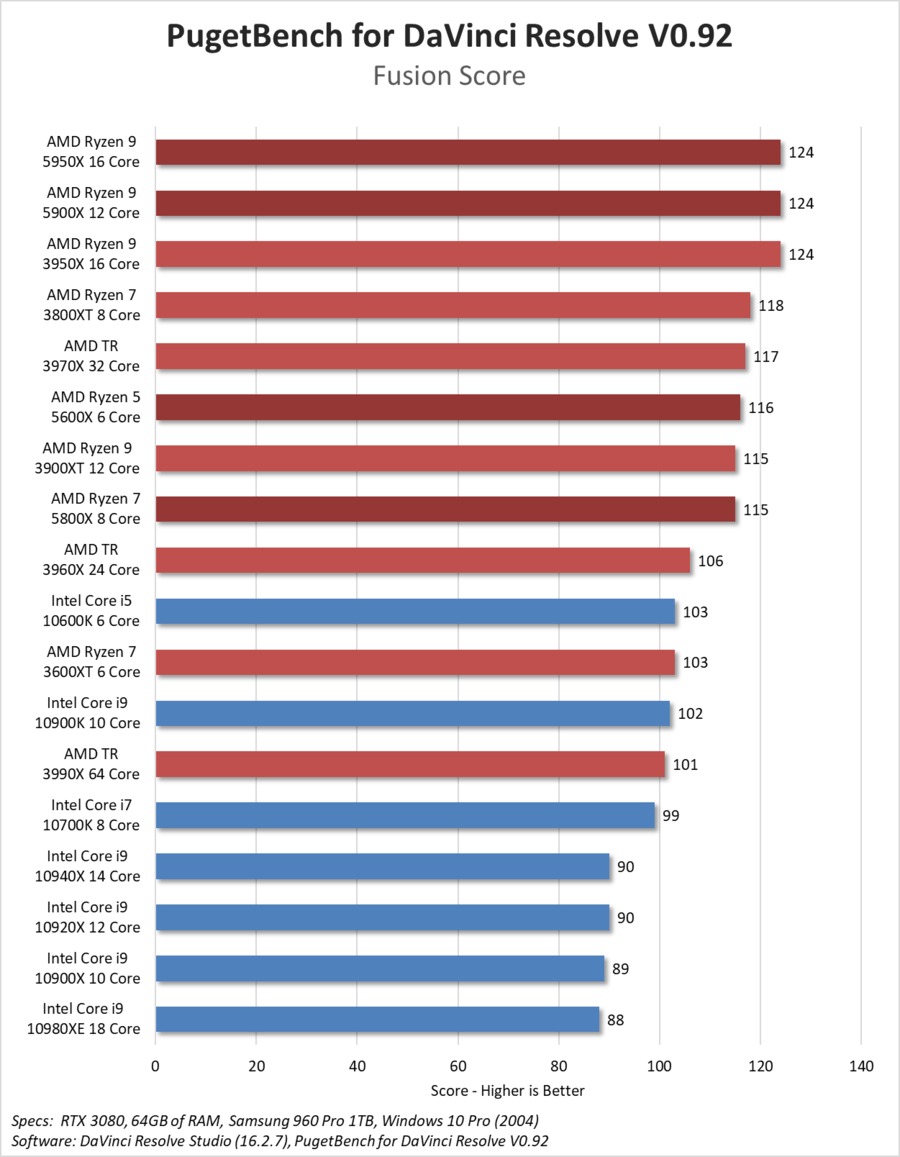 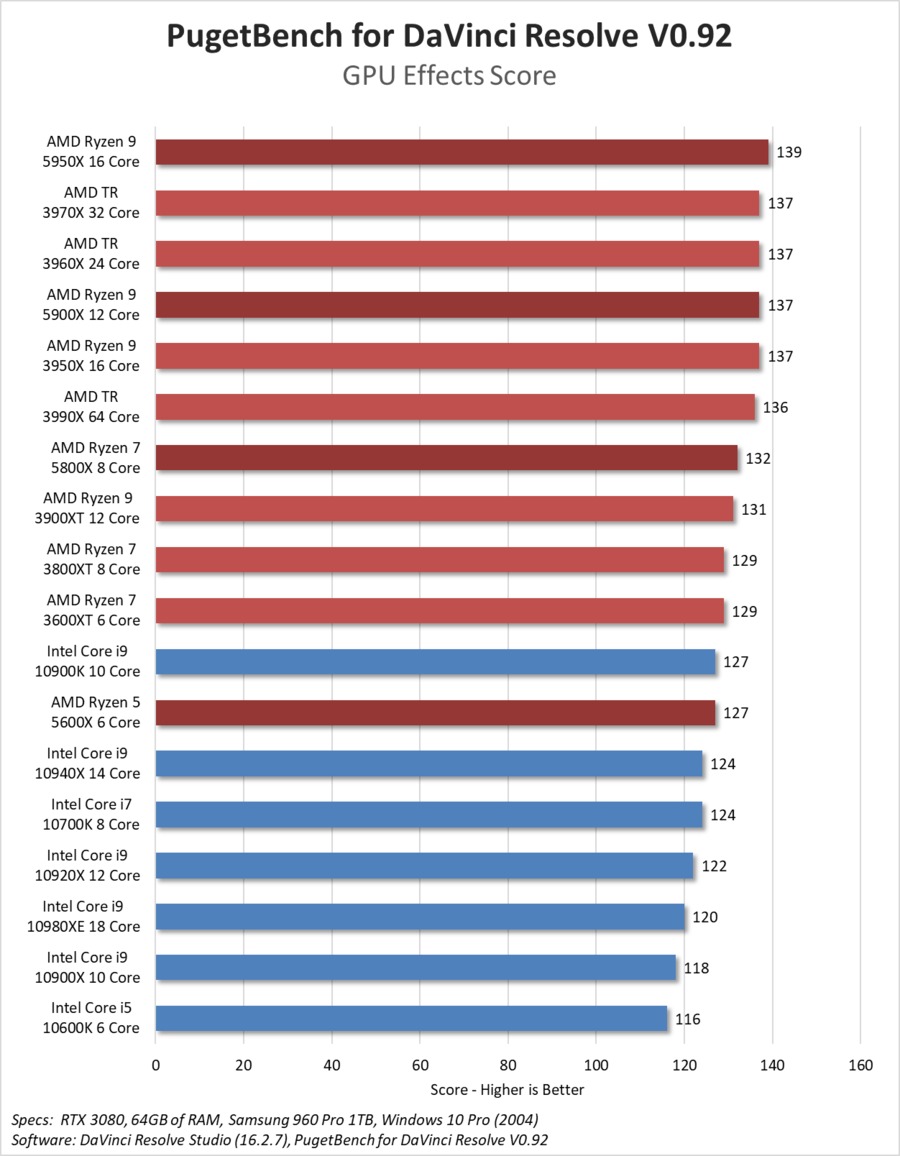 In many of our other articles (especially those for Photoshop and After Effects), the new AMD Ryzen 5000-series CPUs simply blew away everything else. However, those applications are very lightly threaded, making the 19% IPC improvements AMD is touting with these new processors extremely valuable.

DaVinci Resolve Studio is a very different situation. Not only can it take advantage of more CPU cores, but it leverages the GPU significantly more which can make the entire platform (specifically the supported PCI-E generation) a much bigger part of the overall performance picture.

Overall, this results in a pretty big win for AMD over Intel with the Ryzen 5000-series out-performing every similarly priced offering from Intel. The exact amount varies depending on which model you are looking at, but ranges from a small 5% to nearly 30%!

Versus the AMD Ryzen 3000-series CPUs from the previous generation, the new Ryzen 5000-series are anywhere from 2% to 8% faster than the CPUs they are replacing. That might not look great since they also have a 10-20% higher price tag as well, although in terms of absolute cost that works out to only a $50 increase which is fairly small if you look at it as a part of the overall cost of a computer.

This makes the performance of the new Ryzen 5000-series a bit mixed. Yes, AMD is easily dominating Intel across the board, but AMD was already very strong even with the previous generation Ryzen 3000-series. More performance is always great, but the 2-8% improvement over the last generation is very lackluster compared to the 20%+ gain we saw in some other applications like Photoshop.

AMD has been a strong choice for DaVinci Resolve Studio ever since the launch of the 3rd generation Ryzen and Threadripper CPUs due to their higher core counts and inclusion of PCI-E gen 4. Interestingly, the new AMD Ryzen 5000-series processors are not much faster than the previous generation. But, it is enough for AMD to extend their lead over Intel.

This it doesn't affect CPU performance directly, AMD also currently has the benefit of PCI-E 4.0, whereas the Intel platforms are all still using PCI-E 3.0. Since Resolve makes such heavy use of the GPU, this gives AMD an extra little boost to the overall performance in DaVinci Resolve Studio. If/when Intel updates their products to support PCI-E 4.0, that alone should remove around 5-10% of AMD's performance advantage.

Another factor that has changed recently is that the Gigabyte B550 Vision D motherboard – with fully certified Thunderbolt support – has launched and passed our internal qualification process. Thunderbolt has been one of the reasons we have had to maintain an Intel-based platform for DaVinci Resolve since more than almost any other industry we target, Thunderbolt is incredibly important in the video editing/grading world. Until now, only Intel platforms had Thunderbolt support that met our standards. With this motherboard, Thunderbolt is no longer as much of a factor when choosing between Intel 10th Gen and AMD Ryzen CPUs in our workstations.

Since we have not yet found a Threadripper motherboard with fully functioning Thunderbolt support, this also makes Ryzen a strong choice versus Threadripper. The fastest Ryzen 5000-series CPU may still be ~10% slower (or more, depending on the workload) than Threadripper, but for many that is a small price to pay to be able to use all their existing external drives.

Keep in mind that the benchmark results in this article are strictly for DaVinci Resolve Studio and that performance will vary widely in different applications (or even versus the free edition of Resolve). If your workflow includes other software packages (we have similar articles for Premiere Pro, After Effects, Lightroom Classic, and Photoshop), you need to consider how the system will perform in those applications as well. Be sure to check our list of Hardware Articles to keep up to date on how all of these software packages – and more – perform with the latest CPUs.