In every case, using an NVIDIA GeForce video card will give you better performance than an AMD Radeon GPU in Premiere Pro. For example, the NVIDIA GeForce RTX 2060 SUPER will perform around 10-34% faster than the similarly priced AMD Radeon 5700XT depending on how many GPU accelerated effects you are using.

However, most users will find little reason to invest in a GPU higher than the RTX 2060 SUPER unless you work with 8K media where the higher VRAM capacity of the 2080 Ti or Titan RTX can be useful. It is only when you stack a large number of GPU-accelerated effects that there is a significant performance gain (of around 30%) to be had with the higher-end NVIDIA GeForce cards like the RTX 2080 Ti.

While neither AMD nor NVIDIA has released new consumer GPUs since our last Premiere Pro GPU roundup 10 months ago, there are a number of other factors that have changed since then. Not only do we have much newer drivers and Windows updates, but Adobe has made significant improvements to Premiere Pro that may affect the relative performance between various GPU models.

One of the biggest improvements Adobe has made was the addition of GPU-based H.264/H.265 (HEVC) hardware encoding in Premiere Pro 14.2. This update lets Premiere Pro utilize the power of NVIDIA and AMD GPUs to improve export performance by up to 5x! This is such a big deal that we published an entire article on it (Premiere Pro 14.2 H.264/H.265 Hardware Encoding Performance) where we looked at the performance benefit with a range of GPU, CPUs, and export settings. 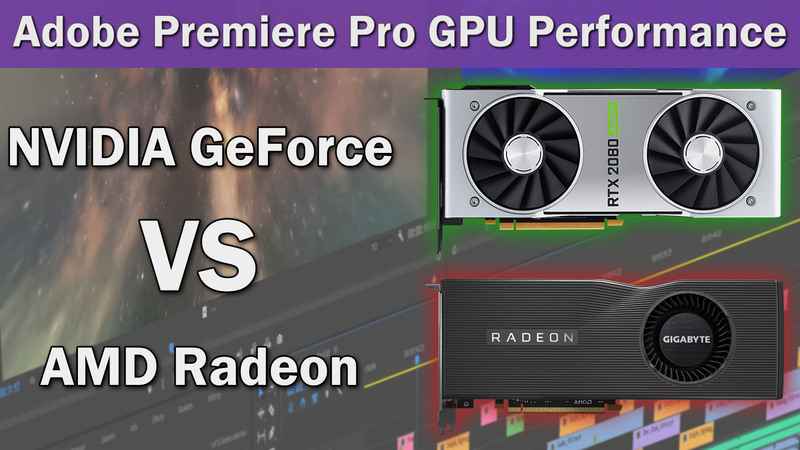 In this article, we are going to look at a range of modern consumer GPUs from both NVIDIA and AMD in order to see how they perform in the latest version of Premiere Pro. In addition, there have been some recent update notes that mention improved multi-GPU performance so we will also be including a dual NVIDIA RTX 2080 Ti configuration to see if there is any reason to invest in dual video cards for Premiere Pro.

*All the latest drivers, OS updates, BIOS, and firmware applied as of July 2nd, 2020

Since looking at GPU performance in Premiere Pro is often a case of examining extreme situations where the GPU is put under a heavy load, we first wanted to start off by looking at the overall performance we saw from our Premiere Pro benchmark with each GPU. For most users, this is likely to be the most accurate representation of what they would experience in their day-to-day work.

Looking at the overall performance, it is pretty clear that Premiere Pro heavily favors NVIDIA video cards. While the AMD Radeon 5700XT and NVIDIA GeForce 2060 SUPER cost roughly the same, the RTX 2060 SUPER is about 10% faster overall. The AMD Radeon Vega is even worse as it is both more expensive and slower than the AMD Radeon 5700XT, but if we were to compare it to NVIDIA in terms of price/performance, it is about 20% slower than the similarly priced NVIDIA GeForce RTX 2070 Super.

One thing to note is that for most users, there is going to be little reason to get a high-end NVIDIA GPU since going from the RTX 2060 SUPER all the way up to the Titan RTX, there is only a 6% difference in performance. And if you look at the second chart for live playback performance, the difference is even less at only 4% which is unlikely to be noticeable.

In fact, there are really only two times when a GPU above the RTX 2060 SUPER may provide you with noticeably better performance: exporting to H.264/5 (due to the new GPU accelerated hardware encoding feature), and when using a large number of GPU accelerated effects. 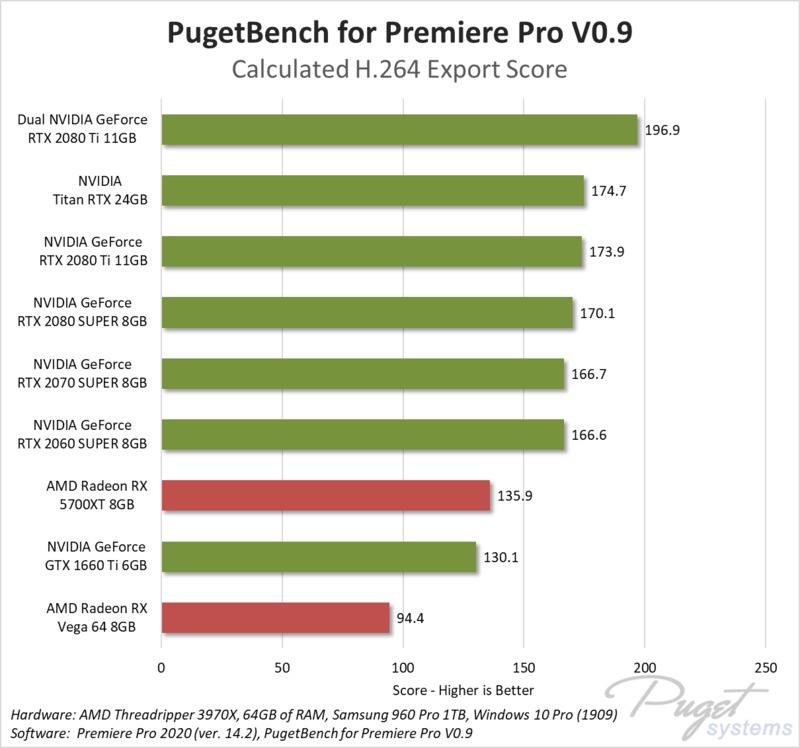 The chart above is not an official part of our Premiere Pro benchmark at the moment but is a calculated score from the H.264 export tests. As we showed in our recent Premiere Pro 14.2 H.264/H.265 Hardware Encoding Performance article, the amount of speedup you can see by utilizing the recently updated hardware encoding feature varies greatly depending on your source media and export settings. In this case, we are exporting 4K media to UHD H.264 40mbps which is typically where we saw the largest performance gains.

What is interesting is that while we saw a large performance improvement going from the GTX 1660 Ti to the RTX 2060 SUPER, there isn't much of a reason to use a higher-end NVIDIA GPU. We were able to see a ~13% performance increase with dual RTX 2080 Ti video cards, but that is a hefty investment to make for a relatively modest improvement in export times. It is possible that we would get the same performance benefits with dual RTX 2060 SUPER GPUs, but we will have to leave that for future testing. 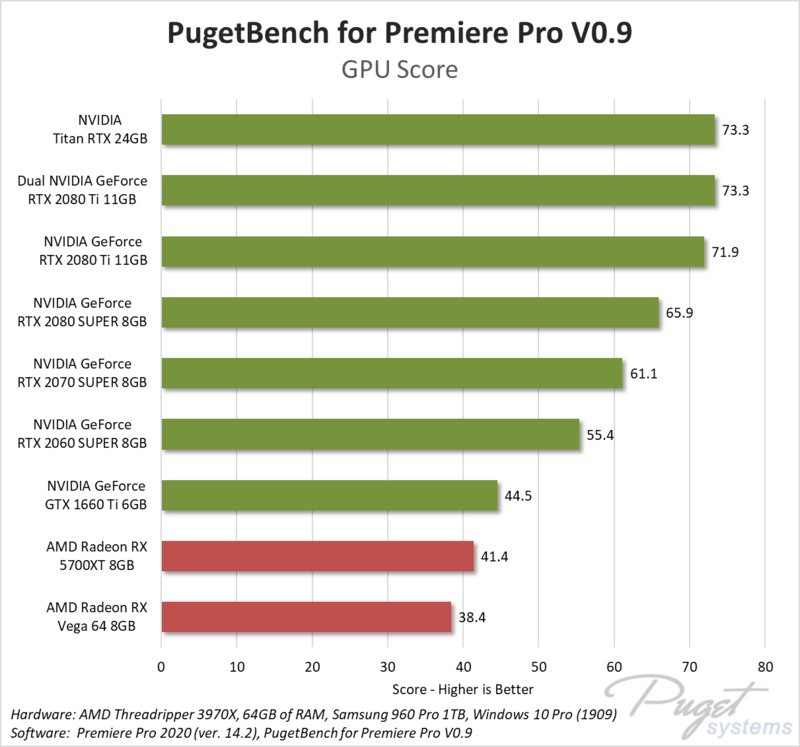 Our heavy GPU effects test looks at live playback and export performance with sequences that have a large number of GPU-accelerated effects including Lumetri Color, Ultra Key, Sharpen, Gaussian Blur, Basic 3D, Directional Blur, VR Digital Glitch, and VR De-Noise. Because it is designed to maximize the load on the GPU and minimize the load on the rest of the system, this should be close to the maximum possible performance difference you will ever experience in Premiere Pro with each video card.

Here, NVIDIA takes an even larger lead over AMD with even the GTX 1660 Ti out-performing the 5700XT and Vega 64 by 8-15%. That means from a price-to-performance standpoint, an NVIDIA GPU should be anywhere from 34% to 60% faster depending on whether you are using the 5700XT or the slower (and more expensive) Vega 64.

Across the various NVIDIA GPU models, there is a pretty solid increase in performance all the way up to the RTX 2080 Ti, but unlike the H.264 export tests, we didn't see much of performance increase with dual RTX 2080 Ti cards.

Should you use a NVIDIA SUPER or AMD Radeon GPU for Premiere Pro?

Between the various NVIDIA GeForce cards currently available, most users will find little reason to invest in a GPU higher than the NVIDIA RTX 2060 SUPER unless you work with 8K media where the higher VRAM capacity of the 2080 Ti or Titan RTX can be useful. It is only when you stack a large number of GPU-accelerated effects that there is a significant performance gain to be had with the higher-end NVIDIA GeForce cards. But for those that do so, you can see up to a 30% increase in performance going from the RTX 2060 SUPER to the RTX 2080 Ti.

As always, keep in mind that these results are strictly for Premiere Pro. If you have performance concerns for other applications in your workflow, we highly recommend checking out our Hardware Articles (you can filter by "Video Card") for the latest information on how a range of applications perform with various GPUs, CPUs, and other hardware.