Over recent years, Adobe has invested heavily in improving GPU-acceleration support in Premiere Pro. While the CPU still does most of the heavy lifting, depending on how many accelerated effects you use, having a more powerful GPU can sometimes make a significant impact on performance.

Recently, both AMD and NVIDIA have released a number of new video cards. From AMD, we have the Radeon RX 5700 8GB and RX 5700 XT 8GB. On the other side of the fence, NVIDIA has released updates to many of their current cards with a "SUPER" modifier. These cards include the GeForce RTX 2060 SUPER 8GB, 2070 SUPER 8GB, and 2080 SUPER 8GB. Beyond a small performance bump, the most notable improvement with these new cards is that the RTX 2060 gets an upgrade from 6GB to 8GB of VRAM. 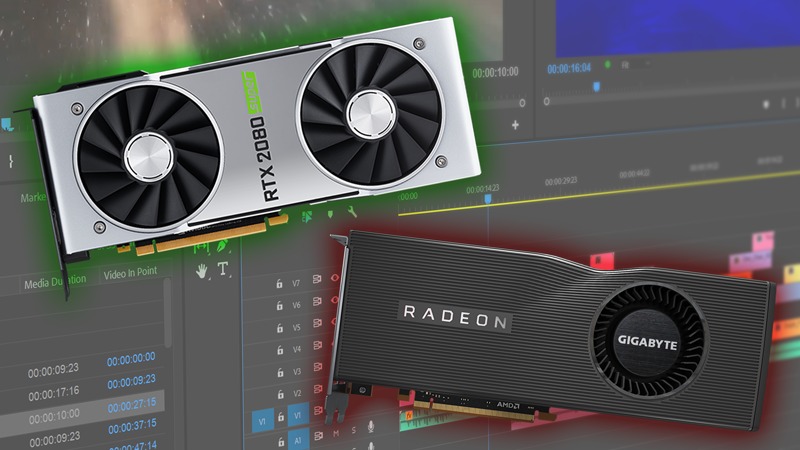 *All the latest drivers, OS updates, BIOS, and firmware applied as of August 9th, 2019

To test each GPU, we will be using the fastest platform currently available for Premiere Pro - most notably the Intel Core i9 9980XE. This does mean that the AMD Radeon RX 5700 XT will not be able to utilize PCI-E 4.0, but we have a specific post coming up that will be examining PCI-E 4.0 in professional apps like Premiere Pro. For that testing, we will be using the new Ryzen 3rd Gen platform since that is currently the only way to get PCI-E 4.0 functionality.

Our Does PCIe Gen4 improve GPU performance in video editing apps? article is now available looking at PCIe Gen4 performance with the AMD Radeon RX 5700 XT. In short, we saw no performance gain with Gen4 in Premiere Pro.

The benchmark we will be using is the latest version of our public Premiere Pro benchmark. Full details on the benchmark and a link to download it yourself is available at:

While our benchmark presents various scores based on the performance of each test, we also wanted to provide the individual results. If there is a specific codec that you often work with, examining the raw results for that task is going to be much more applicable than the Overall Score. Feel free to skip to the next section for our analysis of these results if you rather get a wider view of how each GPU performs in Premiere Pro. 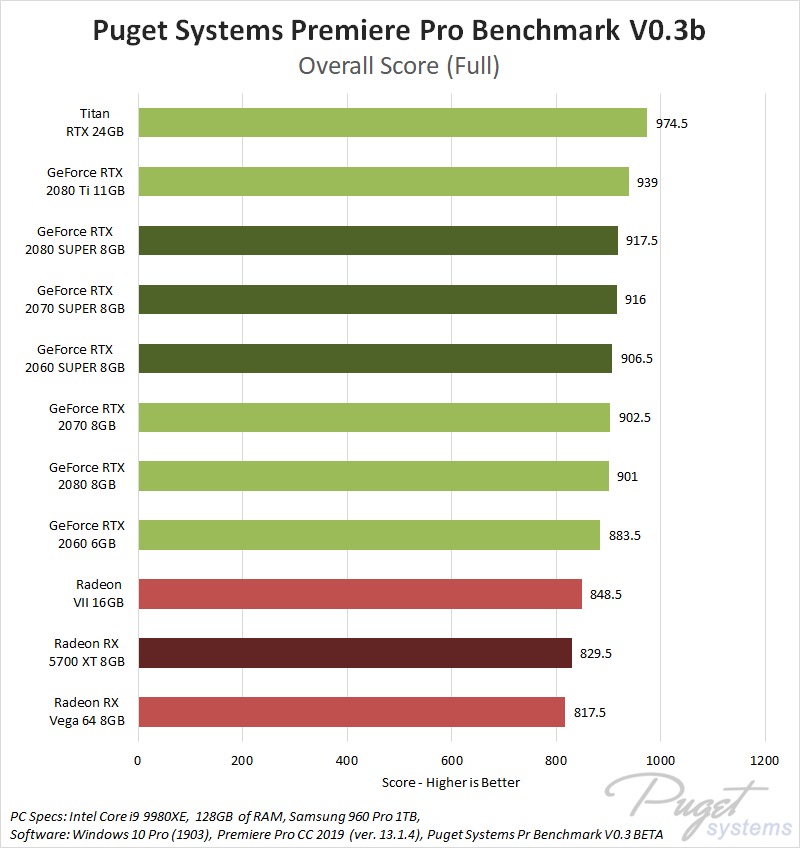 While all the tests used to generate the "Overall Score" utilize the GPU to some degree, it is intended to show the overall system performance for relatively common editing sequences. Since in most cases Premiere Pro is still more reliant on the performance of your CPU than your GPU, it means that there is really only about a 20% performance gap between the fastest and slowest cards we tested.

Even though there isn't a huge difference between each GPU, it is good to see that the NVIDIA SUPER cards are overall a bit faster than their normal predecessors - even if it is only by a few percent. Unfortunately, AMD doesn't fare as well, with all three of the AMD cards we tested coming in at the bottom of the stack.

However, in order to get a better idea of the possible performance difference between each of these cards, it is useful to look at one of the results from our "Heavy GPU Effects" sequence: 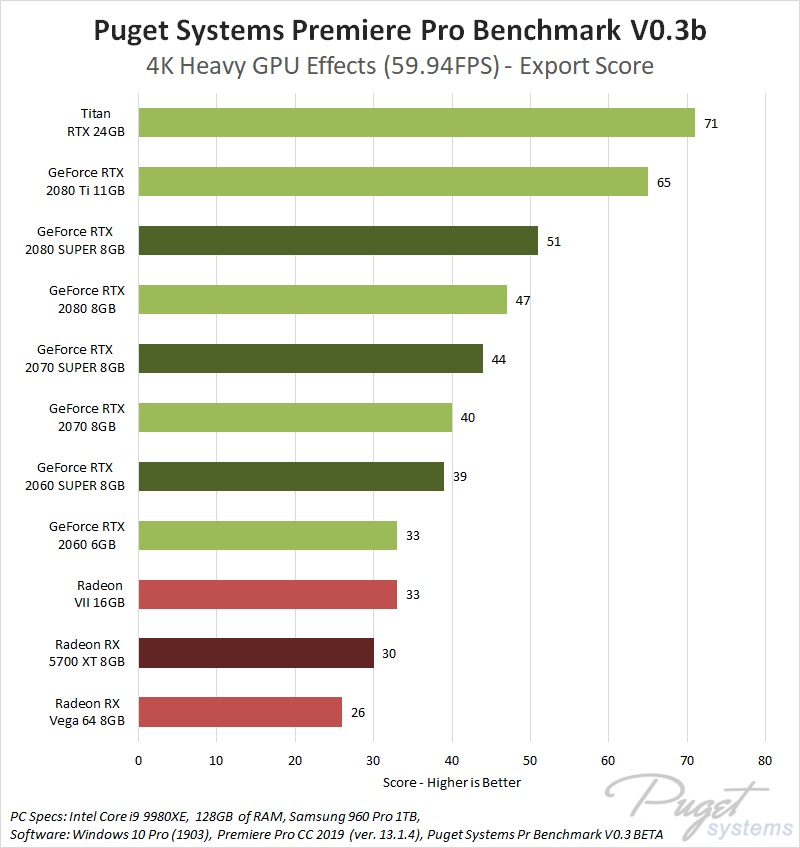 This project is an unrealistic example of what kind of performance you could see with each GPU in Premiere Pro. It includes only GPU-accelerated transitions and effects such as Cross Dissolve, Dip to Black, Dip to White, Wipe, Lumetri Color, VR De-Noise, Ultra Key, Sharpen, Gaussian Blur, Basic 3D, VR Digital Glitch, and Directional Blur. Because it is so heavily skewed towards the GPU, the relative performance people will actually see between these cards likely lies somewhere between this and our Overall Score.

Looking at this specific result, there are two key observations: First, the 2070 and 2080 SUPER cards from NVIDIA are about 10% faster than the normal versions even though they have a $100 lower MSRP. The 2060 SUPER, on the other hand, is closer to 20% faster which more than offsets its $50 increase in MSRP.

On the AMD side, it is clear that Premiere Pro still heavily favors NVIDIA right now, but it is interesting to see that the 5700 XT was faster than the Vega 64. We were not quite sure what to expect since these two cards have traded places in our earlier testing including Photoshop, After Effects, and DaVinci Resolve. The Vega 64 is faster in both Photoshop (10%) and Resolve (20%), but the 5700XT is faster in After Effects (7%) and now Premiere Pr (15%). This simply goes to show how important it is to test individual applications rather than trying to use results from one program to try to predict performance in another.

How well do the NVIDIA SUPER and AMD Radeon RX 5700 XT perform in Premiere Pro?

Premiere Pro is often more limited by the power of your CPU, but in the most extreme cases the new RTX 2070 SUPER and 2080 SUPER are about 10% faster than their "normal" predecessors, while the RTX 2060 SUPER 8GB can be almost 20% faster. Considering the fact that the 2070 and 2080 SUPER cards actually saw a reduction in price, and the 2060 SUPER is only $50 more, this is overall a big win for users in the market for a new Premiere Pro workstation or GPU upgrade.

This means that, for the moment, NVIDIA GPUs are the clear choice for Premiere Pro. While the difference between any GPU may be minor if you are only using basic GPU-accelerated effects like Lumetri Color, the more accelerated effects you use, the larger the performance gain you should see with an NVIDIA card.

Keep in mind that the benchmark results in this article are strictly for Premiere Pro. If your workflow includes other software package (like After Effects, Photoshop, DaVinci Resolve, etc.), you need to consider how these GPUs will perform in those applications as well. Be sure to check our list of Hardware Articles for the latest information on how these cards perform with a variety of software packages.