Skip to content
Always look at the date when you read an article. Some of the content in this article is most likely out of date, as it was written on August 14, 2019. For newer information, see our more recent articles.

AMD has recently made quite a splash in the PC industry with the launch of their 3rd generation Ryzen processors, but they have also released some new video cards like the Radeon RX 5700 XT 8GB. From "team green", NVIDIA has also released new RTX 2060 SUPER 8GB, RTX 2070 SUPER 8GB, and RTX 2080 SUPER 8GB cards. These models are the same price as the normal versions, but feature a small performance bump across the board, and an increase in VRAM on the RTX 2060 SUPER (from 6GB to 8GB). 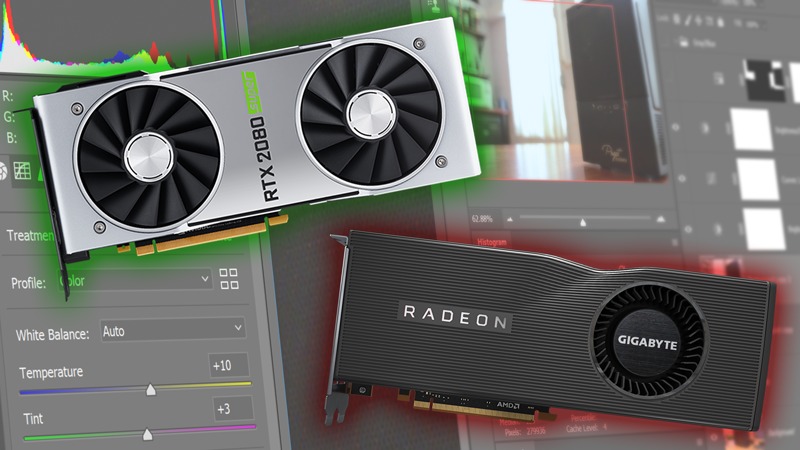 While Photoshop does not typically need a super powerful GPU, we still always like to test new video cards in Photoshop to see how they perform. We have had surprises come up in the past, but the only way to know for sure is to simply put these cards through our Photoshop benchmark.

Since we are interested in how these new cards compare to the previous generation, we will also be including in our testing the full line of NVIDIA GeForce RTX cards as well as the AMD Radeon Vega 64 and Radeon VII. If you would like to skip over our test setup and benchmark sections, feel free to jump right to the Conclusion.

Puget Systems offers a range of workstations that are tailor made for your unique workflow. Our goal is to provide most effective and reliable system possible so you can concentrate on your work and not worry about your computer.

To test each GPU, we will be using one of the fastest platforms currently available for Photoshop – most notably the Intel Core i9 9900K. We do want to point out that in our latest Photoshop CPU Roundup testing, the Ryzen 3900X was actually a touch faster than the i9 9900K, but we have had a few recent issues with that platform so we opted to stick with the tried and true i9 9900K for now.

This does mean that the AMD Radeon RX 5700 XT will not be able to utilize PCI-E 4.0, but we have an entire series of posts coming up that will be examining PCI-E 4.0 in professional apps like Photoshop. For that testing, we will be using the new Ryzen 3rd Gen platform since that is currently the only way to get PCI-E 4.0 functionality.

Our Does PCIe Gen4 improve GPU performance in video editing apps? article is now available looking at PCIe Gen4 performance with the AMD Radeon RX 5700 XT. In short, we saw no performance gain with Gen4 in Photoshop.

The benchmark we will be using is the latest release of our public Photoshop benchmark. Full details on the benchmark and a link to download and run it yourself are available at Puget Systems Adobe Photoshop CC Benchmark.

While our benchmark presents various scores based on the performance of each test, we also wanted to provide the individual results. If there is a specific task that is a hindrance to your workflow, examining the raw results for that task is going to be much more applicable than any of the calculated scores. Note that the tests that utilize the GPU are highlighted in blue.

Feel free to skip to the next section for our analysis of these results if you rather get a wider view of how each GPU performs in Photoshop. 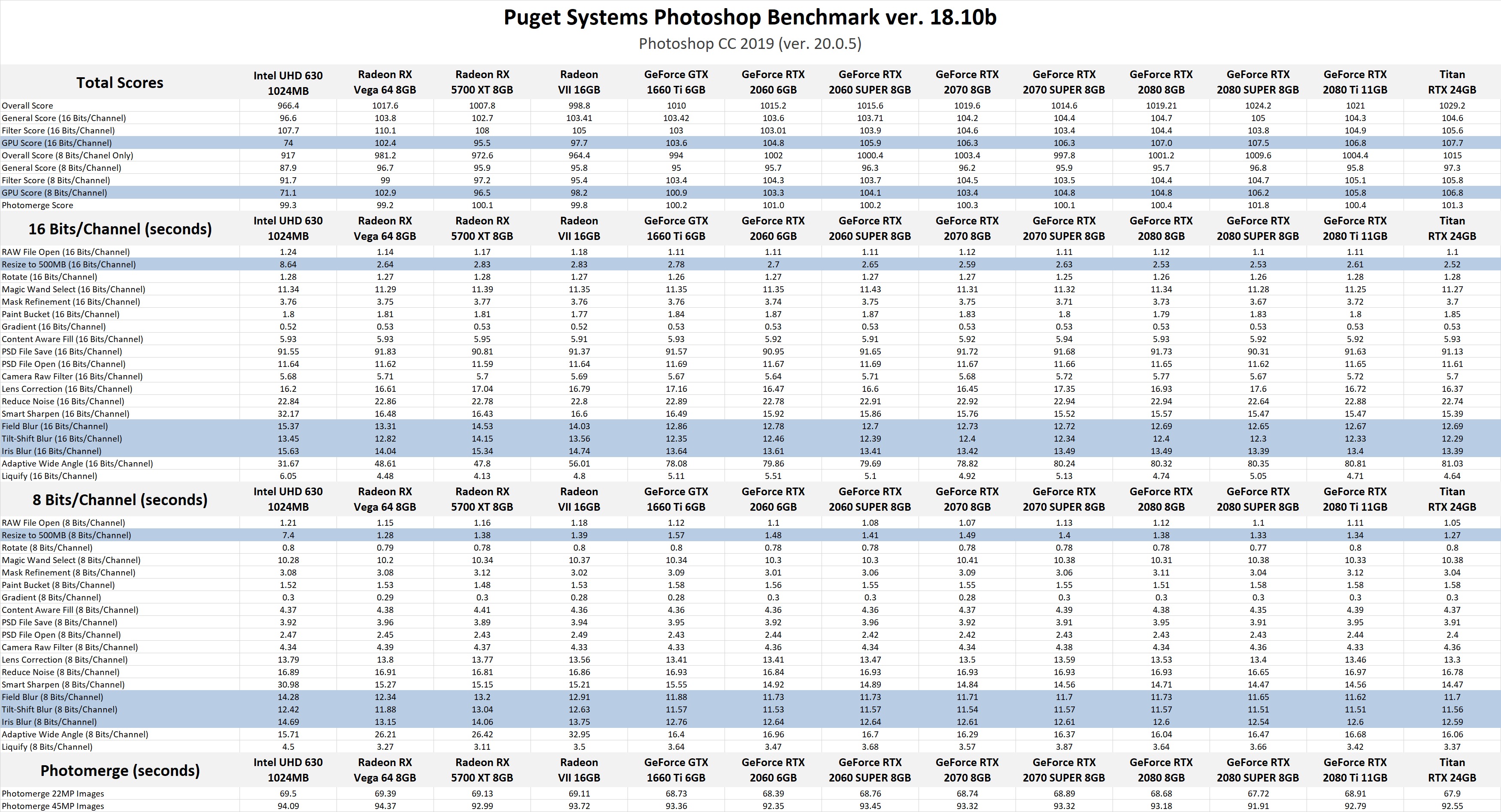 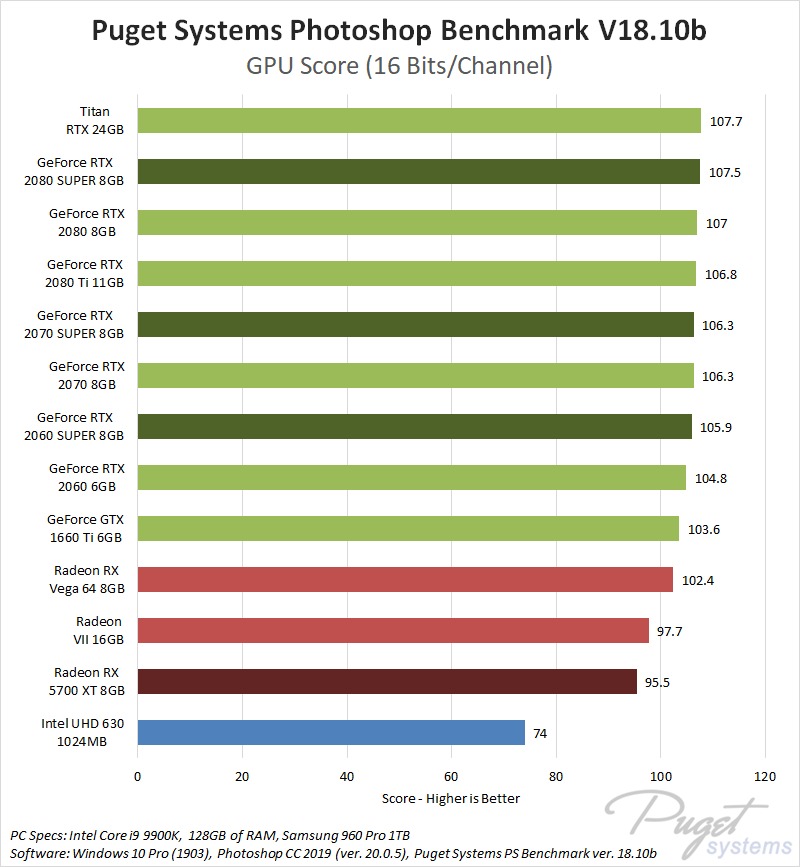 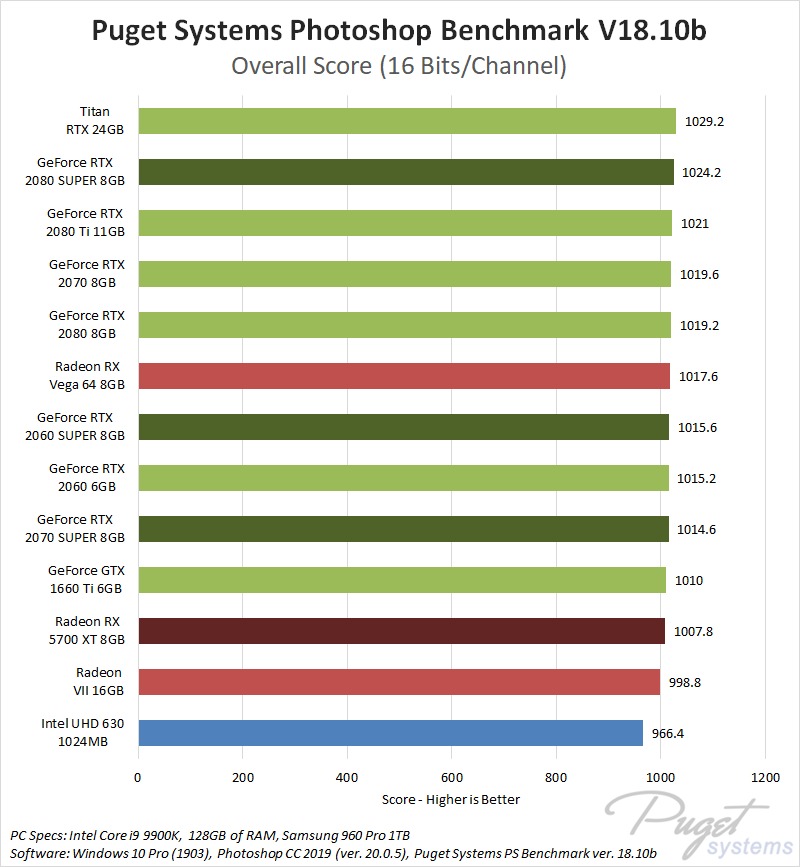 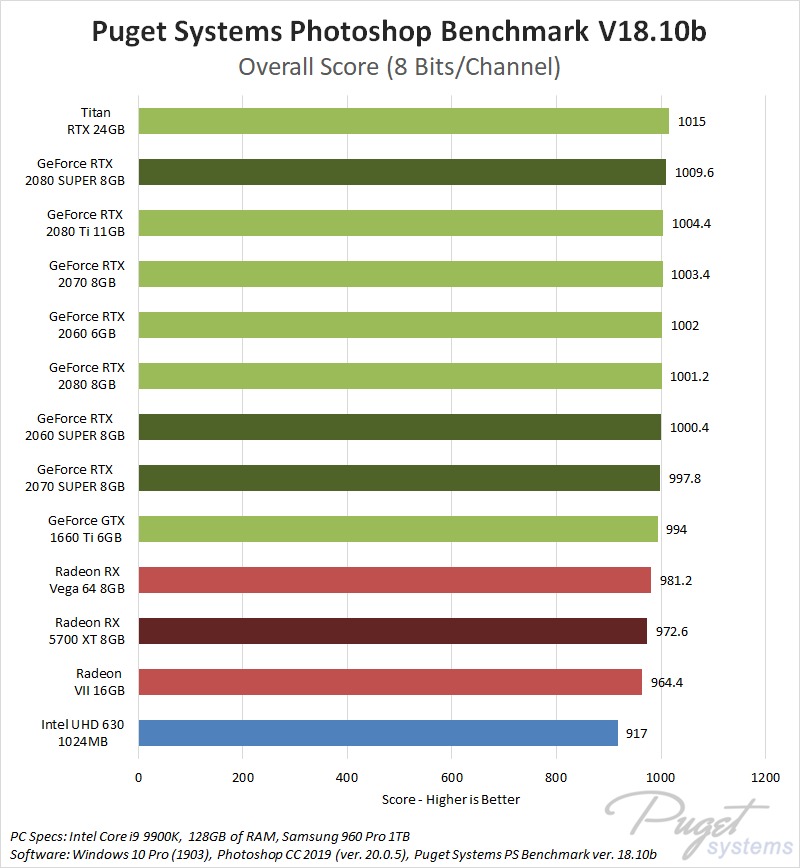 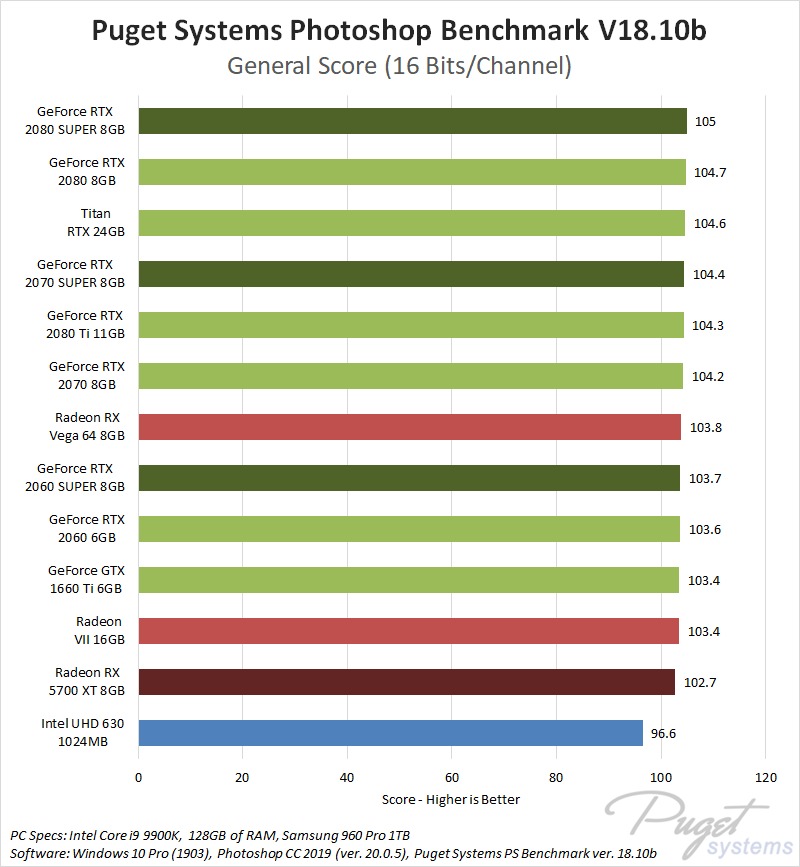 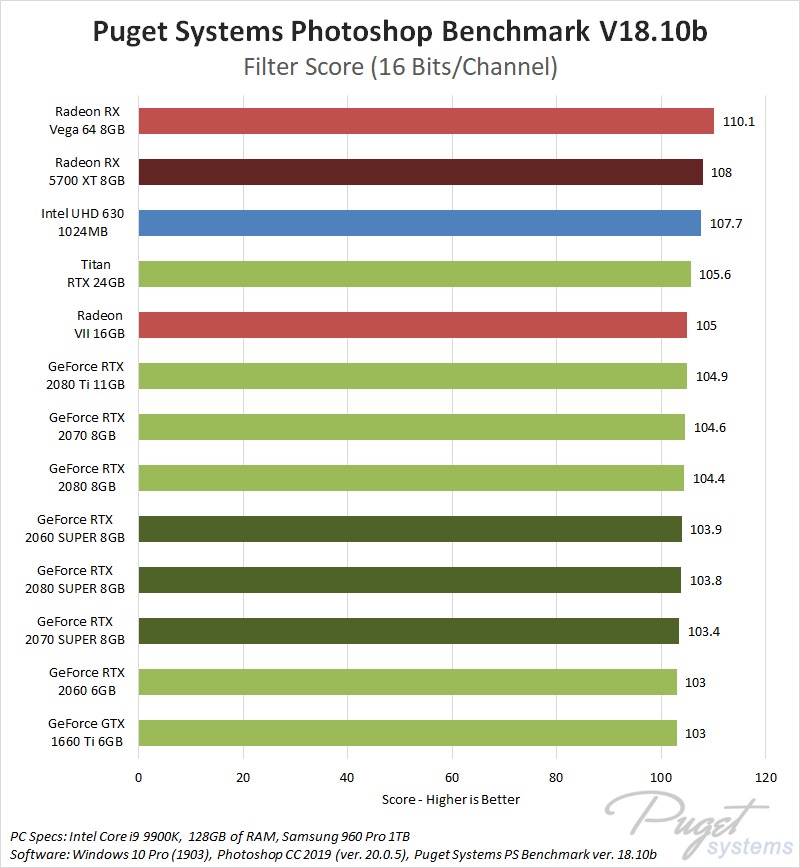 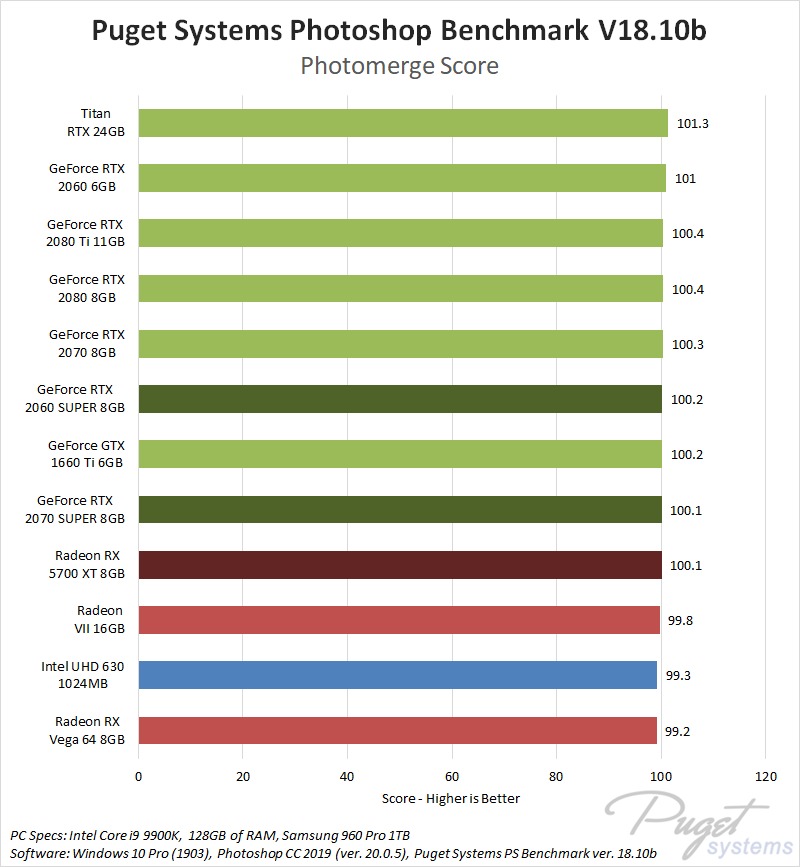 Since we are specifically looking at video cards in this post, we are going to mostly examine the "GPU Score (16 Bits/Channel)" result. If you scroll to the next chart to look at the "Overall Score", you will notice that there isn't much of a difference between each GPU when looking at Photoshop performance from an overall perspective. In fact, in that case even the NVIDIA Titan RTX is only ~5% faster than the integrated graphics on the Core i9 9900K. However, if we look at just the tasks that actually benefit from using a discrete GPU, we at least get enough of a separation between the different models to pull out some useful information.

Starting with the NVIDIA SUPER cards, they are a tiny faster than the "normal" versions, but it is by at most around 1% which is not going to be noticeable in the real world. Besides the extra VRAM on the GeForce RTX 2060 SUPER 8GB, there really isn't much of an advantage to these new cards over the old ones – although since they are not more expensive, it is more of a "why not?" situation if you are already in the market for a new workstation or GPU upgrade.

Things get more interesting when we look at the AMD cards. First of all, if you are choosing between AMD and NVIDIA for Photoshop, it is pretty obvious that NVIDIA has a clear advantage. Like anything GPU-based in Photoshop, the difference isn't huge, but the Radeon RX Vega 64 is about 3% slower than the NVIDIA equivalent (the RTX 2070 SUPER) while the Radeon RX 5700 XT and Radeon VII are about 10% slower than their NVIDIA counterparts (the RTX 2060 SUPER and RTX 2080 SUPER respectively).

This brings up another interesting result: the Radeon RX Vega 64 is faster than both the Radeon VII and the new Radeon RX 5700 XT. This confused us quite a bit at first, and we ended up re-running our benchmark multiple times, reinstalling drivers, etc. to try to figure it out. What really threw us through a loop was that we did not see this same behavior in other apps like After Effects, so it did not seem to be a problem with the hardware, drivers, firmware, or system configuration.

We spoke with our contacts at AMD and what appears to be happening is that the Radeon RX 5700XT (and Radeon VII) currently include software optimizations for gaming, but not yet for office/professional workloads. While it is possible that post launch software optimizations will improve performance in applications like Photoshop, we will have to wait to see if that happens.

How well do the NVIDIA SUPER and AMD Radeon RX 5700 XT perform in Photoshop?

While the new NVIDIA SUPER cards are not noticeably faster than the "normal" versions, they are still faster than any of the AMD GPUs currently available, including the new Radeon RX 5700 XT. In fact, since the 5700 XT does not yet appear to have optimizations for pro apps like Photoshop, even the previous generation AMD Radeon RX Vega 64 is faster than the 5700XT right now.

To be fair, however, Photoshop is not exactly a GPU powerhouse. There isn't much reason to use a higher-end NVIDIA GPU, and even if we only look at the tasks that utilize the GPU, there is only about a 10% advantage at most for using NVIDIA over AMD. This isn't nothing, but it also isn't likely to be a deal breaker for many users.

In fact, the best GPU for you is likely going to be determined more by the performance in other application you use (After Effects, Premiere Pro, DaVinci Resolve, etc.) than Photoshop – even if Photoshop is a big part of your workflow. Be sure to check our list of Hardware Articles for the latest information on how these CPUs perform with a variety of software packages.