Skip to content
Always look at the date when you read an article. Some of the content in this article is most likely out of date, as it was written on August 15, 2019. For newer information, see our more recent articles.

After Effects is always an interesting application to look at in terms of GPU performance because Adobe has been steadily increasing the number of effects that benefit from using a video card. In most cases, it is still going to be far more important to have a CPU that is optimized for AE (specifically one with high per-core performance), but it is becoming more and more common that you might notice a performance improvement with a faster GPU. 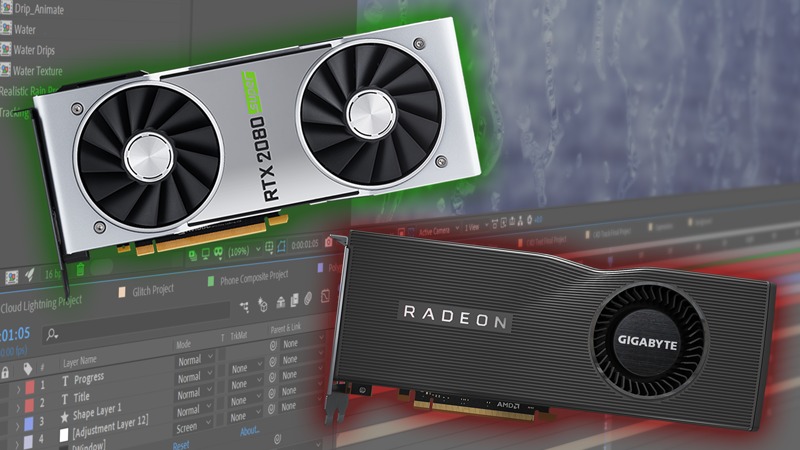 To test each GPU, we will be using one of the fastest platforms currently available for After Effects – most notably the Intel Core i9 9900K. This does mean that the AMD Radeon RX 5700 XT will not be able to utilize PCI-E 4.0, but we have an entire series of posts coming up that will be examining PCI-E 4.0 in professional apps like After Effects. For that testing, we will be using the new Ryzen 3rd Gen platform since that is currently the only way to get PCI-E 4.0 functionality.

Our Does PCIe Gen4 improve GPU performance in video editing apps? article is now available looking at PCIe Gen4 performance with the AMD Radeon RX 5700 XT. In short, we saw almost no performance gain with Gen4 in After Effects.

The benchmark we will be using is the latest release of our public After Effects benchmarks. However, note that we will not be using our Render Node benchmark since it does not currently load the GPU very heavily. That is something we have looked into, but we found that if we try to spawn multiple render threads for a project that is too GPU-heavy, it often results in either the GPU driver or aerender.exe crashing. So for now, we are going to stick with more "standard" After Effects workloads.

Full details on the benchmark and a link to download and run it yourself is available at:

While our benchmark presents various scores based on the performance of each test, we also wanted to provide the individual results. If there is a specific task that is a hindrance to your workflow, examining the raw results for that task is going to be much more applicable than our Overall scores. Feel free to skip to the next section for our analysis of these results if you rather get a wider view of how each GPU performs in After Effects. 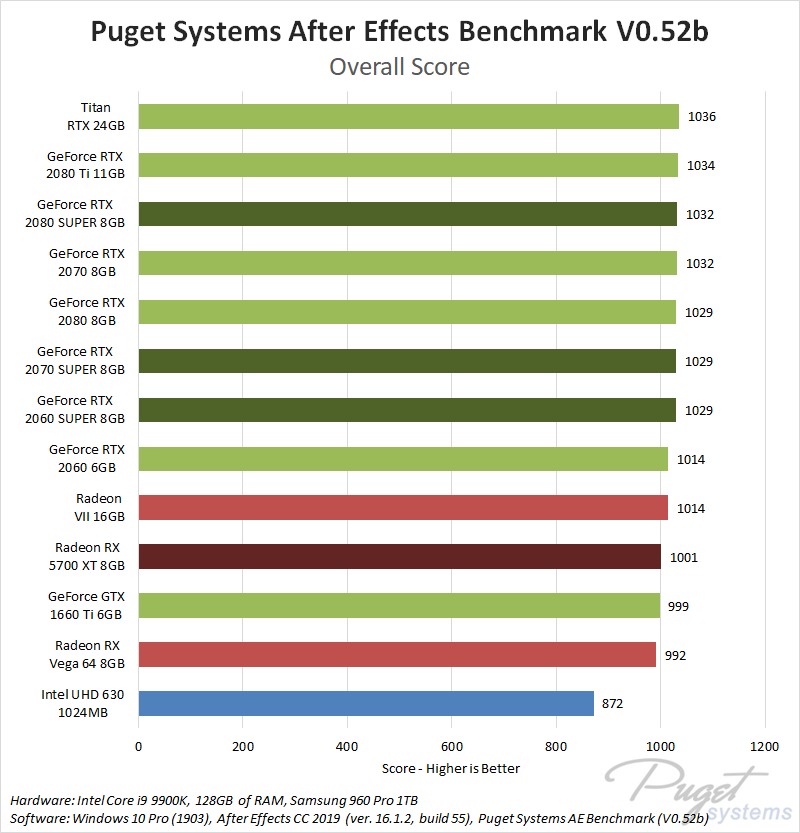 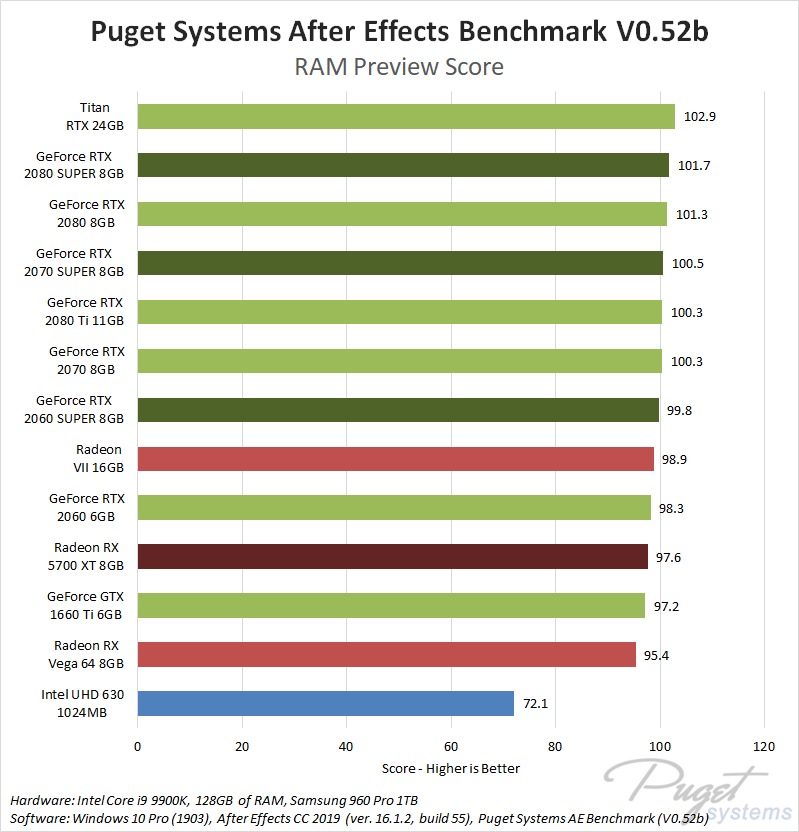 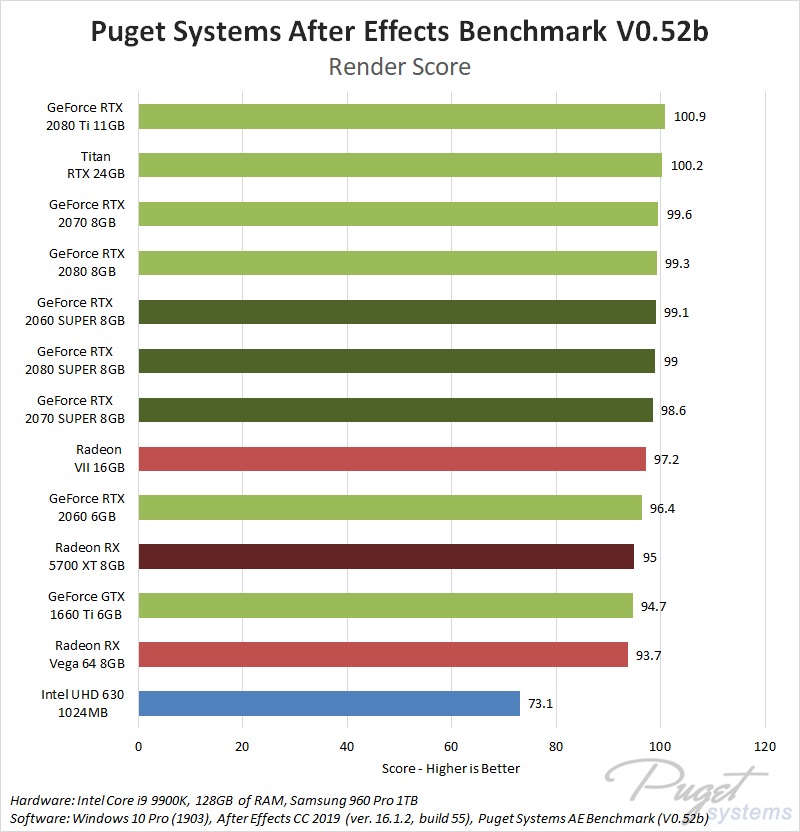 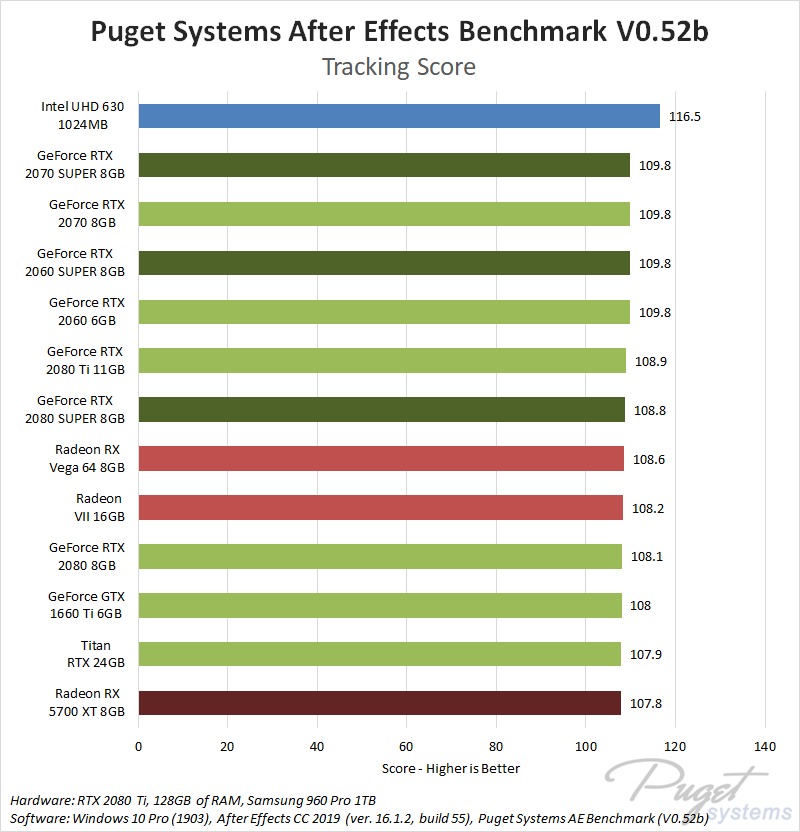 If we just look at scores from our After Effects benchmark (whether it is the Overall, RAM Preview, Rendering, or Tracking scores), the results are not all that interesting. Even though Adobe has been adding more and more GPU acceleration to After Effects, it remains primarily a CPU-driven application. While there are a few interesting tidbits in here – such as how tracking is somehow slightly faster if you do not use a discrete GPU – there is overall only a small difference between any of the NVIDIA and AMD cards we tested. At most, we saw about an 8% performance delta in the RAM Preview and Render scores, and that is only if we compare the Radeon RX Vega 64 (the slowest card tested) to the fastest NVIDIA card.

However, if we just look at some of the results from our "GPU Stress" project, we get an idea of the maximum performance difference between these cards. This isn't a representation of what you would typically see in AE, but depending on how many GPU accelerated effects you use, your performance will likely fall between our Overall Score and the results in the chart below: 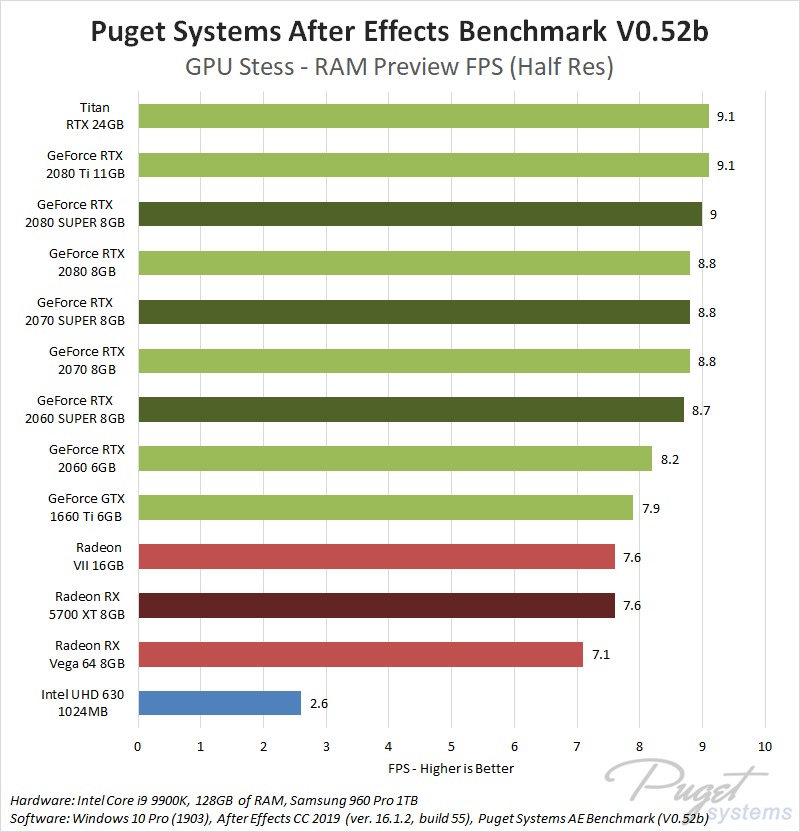 The RAM Preview results for our GPU Stress project at half res is one of the best examples of the possible benefit you could see with a faster GPU in After Effects. Here, there are a few major things we want to point out. First, there is a very clear advantage to using a discrete GPU from AMD or NVIDIA over something like the integrated graphics found on the Intel Core i9 9900K. Depending on the specific GPU model, you are looking at somewhere around a 270% to 350% increase in performance with a discrete GPU.

Second, it is also pretty obvious that NVIDIA has a significant performance advantage over AMD. Compared to their NVIDIA counterparts, the AMD Radeon RX 5700 XT and Radeon VII are about 15% slower than the GeForce 2060 SUPER and 2080 SUPER respectively. Interestingly, the AMD Radeon Vega 64 was the slowest card for this (and most other) test in After Effects, coming in at almost 20% slower than the NVIDIA GeForce 2070 SUPER. This was a bit of a surprise to us as the Vega 64 was actually the fastest AMD GPU we tested in Photoshop.

Speaking of the NVIDIA SUPER cards, most of the models are not all that much faster than the "normal" versions with the exception of the 2060 SUPER. For this card, we saw about a 4% increase in performance over the standard RTX 2060.

How well do the NVIDIA SUPER and AMD Radeon RX 5700 XT perform in After Effects?

Outside of very specific situations, After Effects is usually going to be limited more by your CPU than your GPU. However, the more GPU accelerated effects you use, the larger the benefit to using a faster video card. Even in these cases, however, the new NVIDIA SUPER cards are not noticeably faster than the old "normal" versions. On the other hand, NVIDIA cards are across the board faster than their AMD Radeon equivalents. While the exact amount varies by model, in the most extreme cases you are looking at about a 15% performance advantage by using NVIDIA over AMD at this time.

Keep in mind that the benchmark results in this article are strictly for After Effects. If your workflow includes other software package (like Photoshop, Premiere Pro, DaVinci Resolve, etc.), you need to consider how these GPUs will perform in those applications as well. Be sure to check our list of Hardware Articles for the latest information on how these cards perform with a variety of software packages.