Skip to content
Always look at the date when you read an article. Some of the content in this article is most likely out of date, as it was written on August 27, 2019. For newer information, see our more recent articles.

PCIe Gen4 is finally here, boasting twice the theoretical bandwidth as PCIe Gen3. However, there is currently only a single platform (AMD's x570 chipset) and a handful of video cards (AMD's Radeon 5700 line) that support it. Even though PCIe Gen4 is in its infancy right now and things will likely change over time, this raises the question: does PCIe Gen4 matter for video editing? 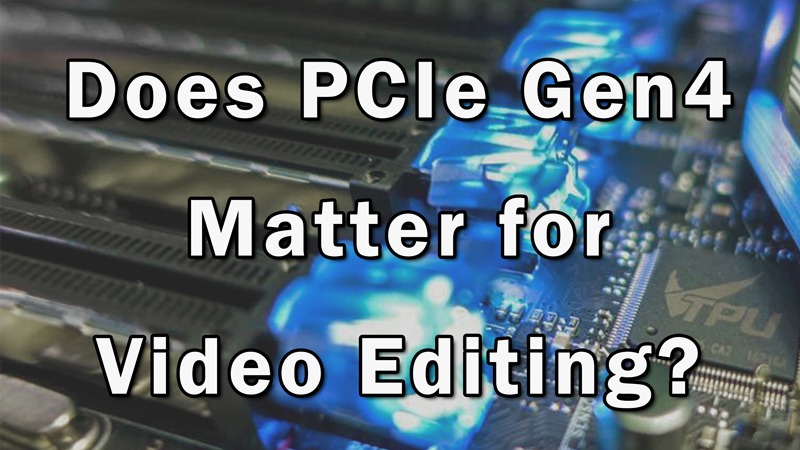 This is actually a very complex question since PCIe speed not only affects things like GPU performance, but it also allows for faster storage and other devices. To keep things simple, for now we are going to strictly look at how PCIe Gen4 affects performance with one of the few Gen4 capable video cards – the AMD Radeon RX 5700 XT 8GB. To provide a point of reference, we will also be including NVIDIA's GeForce RTX 2060 SUPER 8GB using PCIe Gen3 since it has the exact same MSRP as the 5700 XT.

Note that this article uses the same benchmarks as our recent "GPU Roundup: NVIDIA SUPER vs AMD RX 5700 XT" articles for Premiere Pro, After Effects, DaVinci Resolve, and Photoshop. So, if you wish to know how the performance stacks up against any of the higher-end GPUs from AMD and NVIDIA, the scores can be directly compared.

*All the latest drivers, OS updates, BIOS, and firmware applied as of August 25th, 2019

The benchmarks we will be using are the latest release of our public benchmarks. Full details on what is tested as well as links to download and run them yourself are available at:

While our benchmarks present various scores based on the performance of each test, we also wanted to provide the individual results. If there is a specific task that is a hindrance to your workflow, examining the raw results for that task is going to be much more applicable than any of the overall scores. Feel free to skip to the next section for our analysis of these results if you have no desire to pour through thousands of numbers. 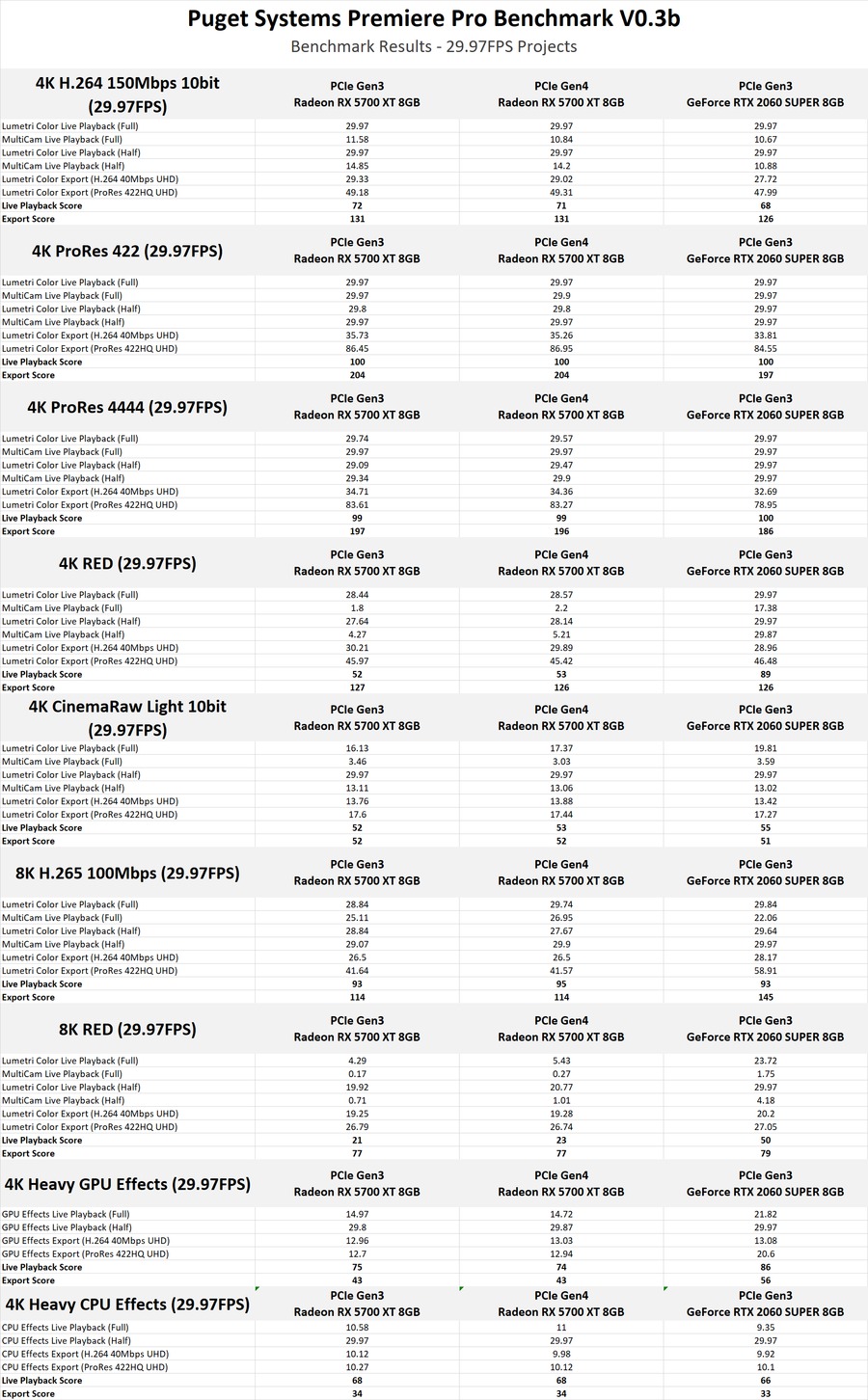 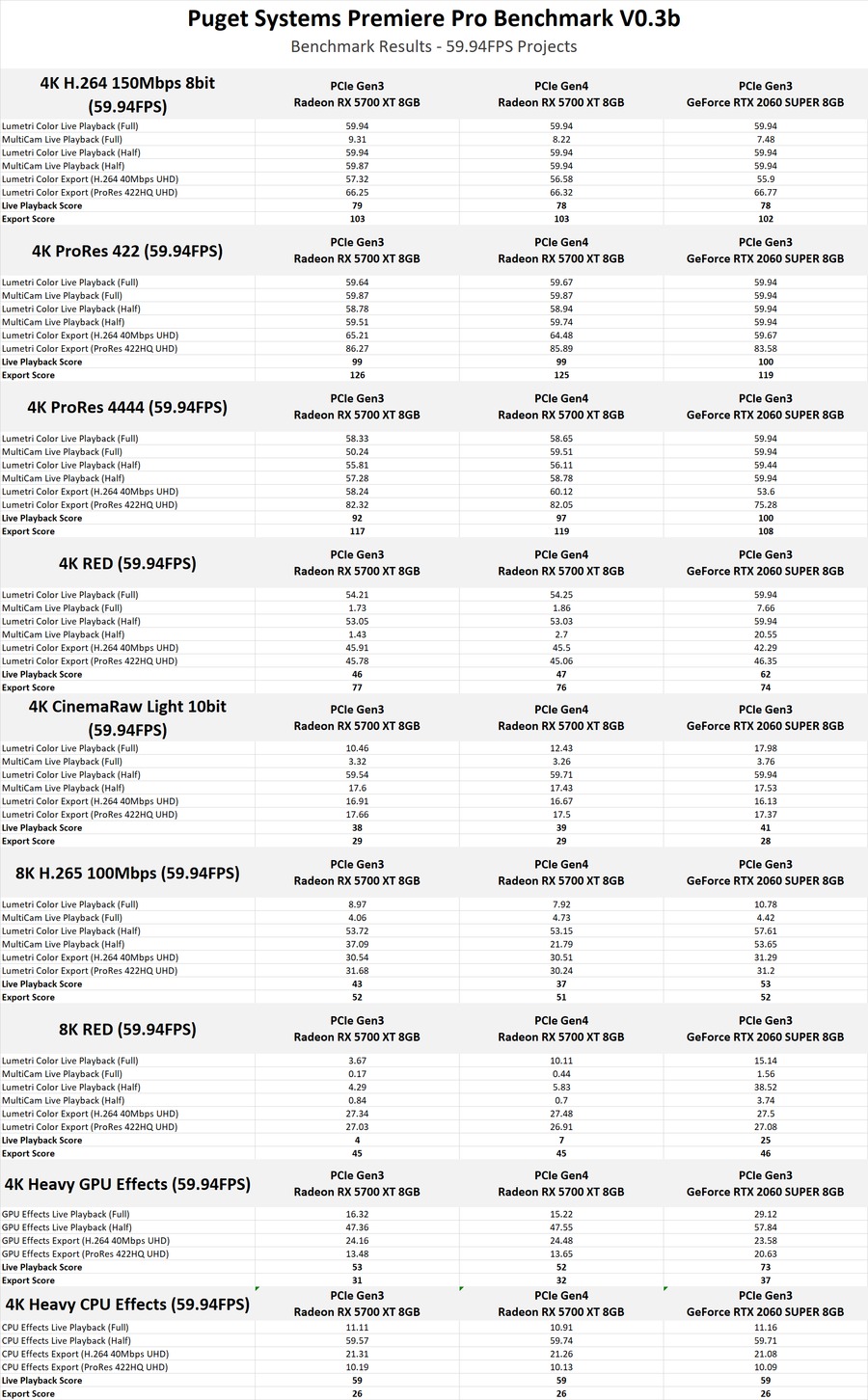 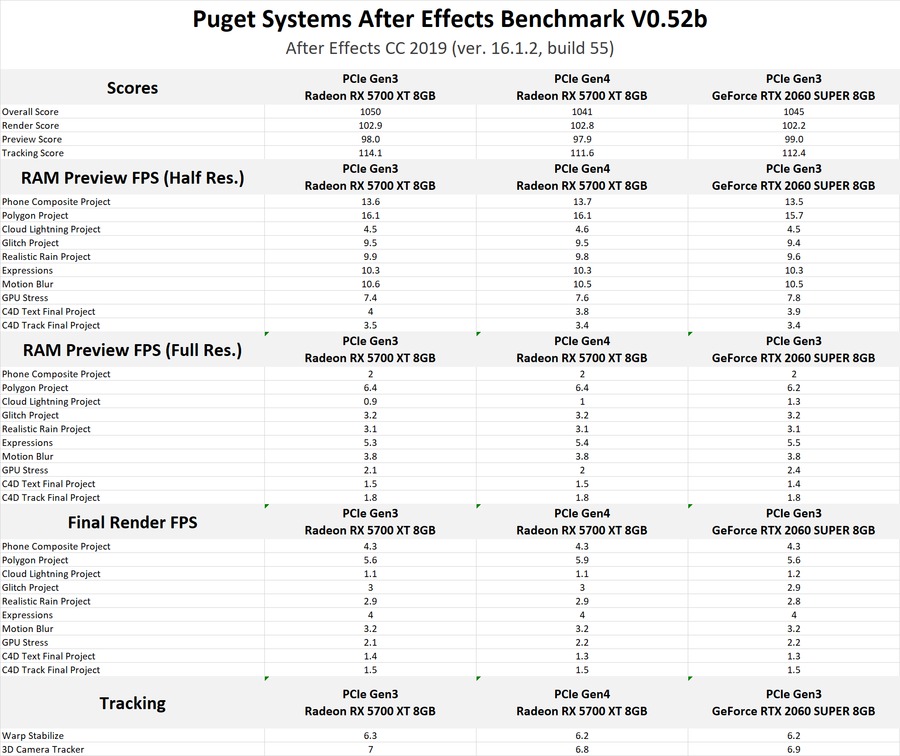 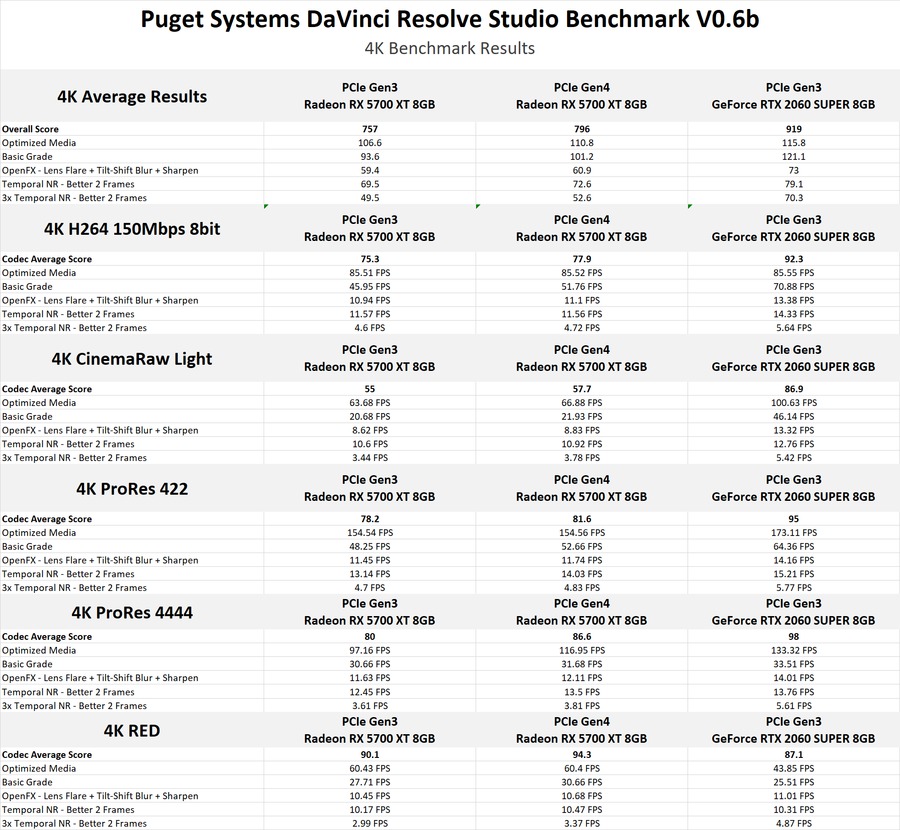 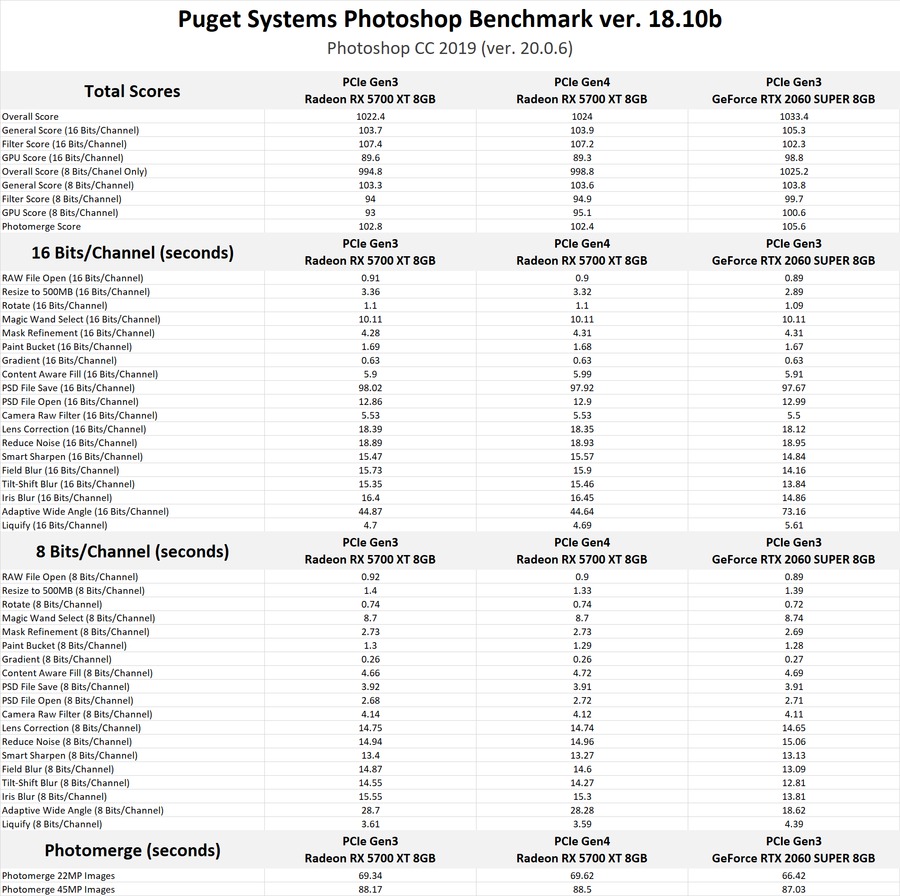 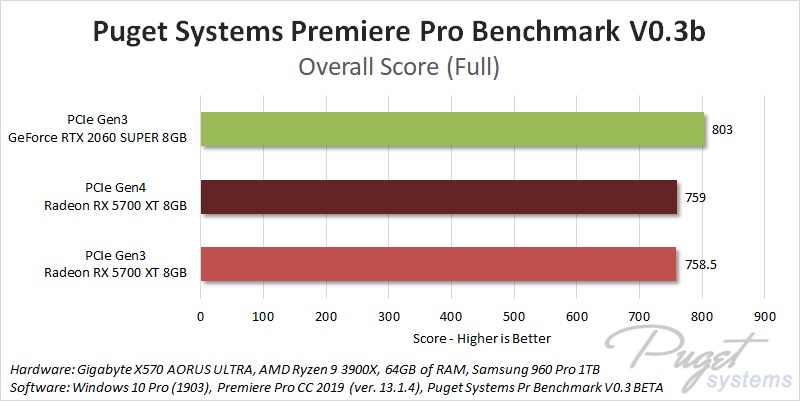 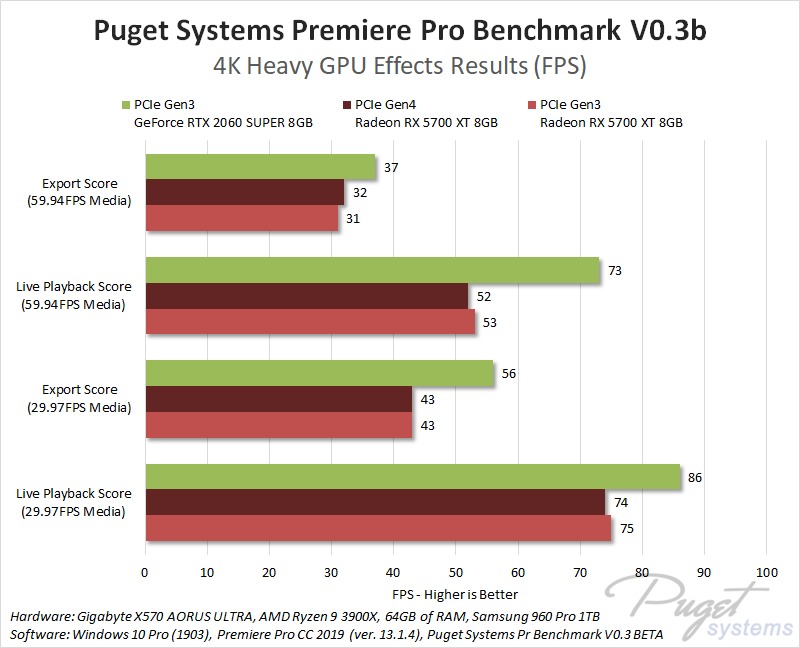 Our "Heavy GPU Effects" sequence is intended to be an unrealistic example the maximum performance difference between different GPUs in Premiere Pro and the best chance for PCIe Gen4 to show a performance advantage. It includes only GPU-accelerated transitions and effects such as Cross Dissolve, Dip to Black, Dip to White, Wipe, Lumetri Color, VR De-Noise, Ultra Key, Sharpen, Gaussian Blur, Basic 3D, VR Digital Glitch, and Directional Blur.

Unfortunately, the results for Gen3 and Gen4 with the 5700 XT are all within 1 FPS of each other which is within our margin of error for this type of test. This means that with the fastest PCIe Gen4 capable GPU currently available, there is no performance gain to be had with PCIe Gen4 in Premiere Pro. 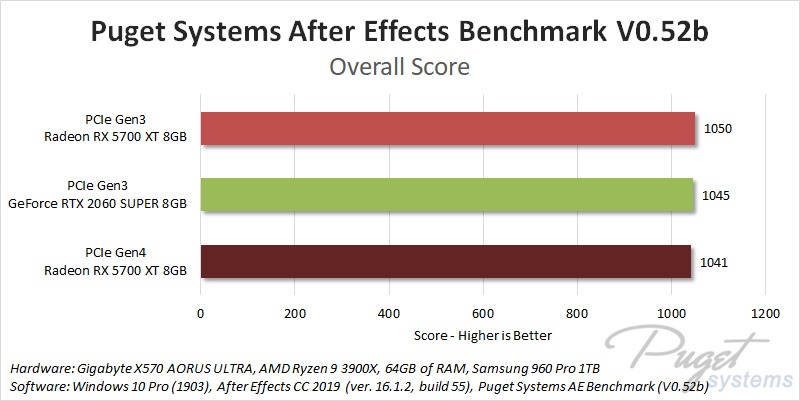 After Effects uses the GPU even less than Premiere Pro, so the Overall Score for this benchmark really doesn't tell us much. Between Gen3 and Gen4, the 5700X scores were less than 1% apart, and even the RTX 2060 SUPER scores were effectively the same as the 5700 XT. In order to get a closer look at one of the few times we did see a performance gain with PCIe Gen4, let's examine just the RAM Preview result from our "GPU Stress" project: 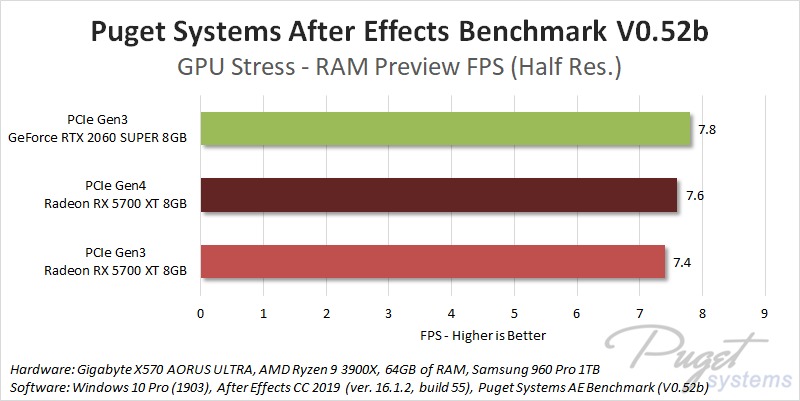 Looking at just this one test, we saw a small 3% gain in playback FPS with the Radeon RX 5700 XT using PCIe Gen4 over Gen3. This is a really small difference, and means that at least at the performance level of the 5700 XT, there shouldn't be a realistic situation where PCIe Gen4 matters for GPU performance in After Effects. 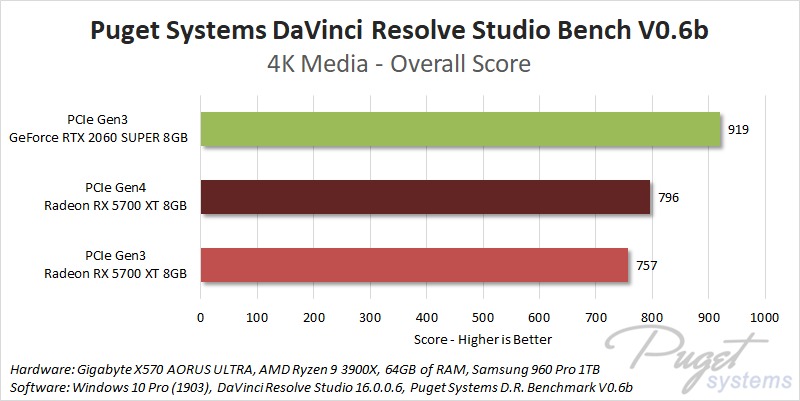 DaVinci Resolve is a very GPU-focused application which means we should see a much larger performance impact with PCIe Gen4 compared to Premiere Pro or After Effects. And in fact, we did see a larger benefit, although it was only by about 5% overall.

What is interesting is that when we examined the individual results, it was not the OpenFX or TNR tests that tended to show the largest increase in performance – it was our "Basic Grade" tests: 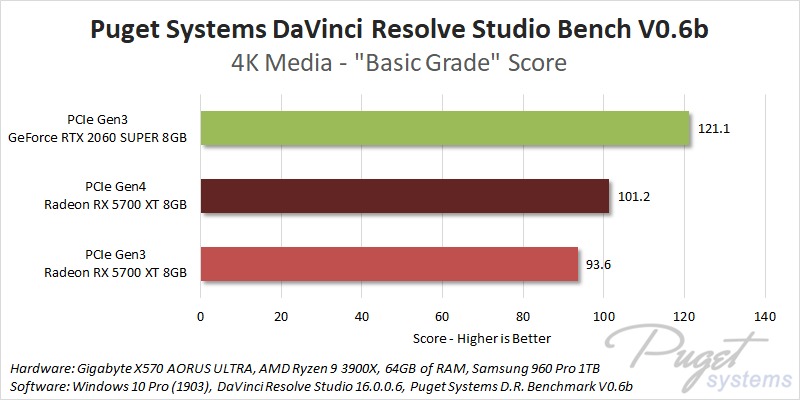 Averaging all our "Basic Grade" tests with the various codecs we use, we saw about an 8% increase in FPS with PCIe Gen4. This isn't a huge increase – and not enough to allow the 5700 XT to close with the RTX 2060 SUPER – but it should be noticeable in the real world.

Dialing down things even finer, the largest performance gain across all the individual tests was surprisingly with ProRes 4444 footage running the "Optimized Media" test:

The fact that this test showed the largest performance gains with PCIe Gen4 took us completely by surprise since this is essentially testing straight transcode performance with no grading whatsoever. Typically, the CPU makes a much larger difference than the GPU for this, but for whatever reason the extra bandwidth from PCIe Gen4 was able to increase performance by about 20%. 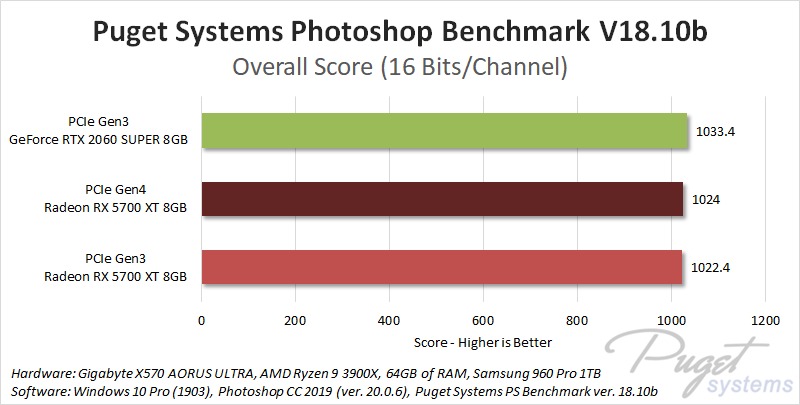 We often round out our video editing articles with Photoshop since even though it is not a true video editing application (unless you are one of the rare people that uses the video timeline features), it is very commonly used alongside Premiere Pro, After Effects, and similar applications.

Similar to After Effects, faster GPUs really don't make a huge impact in Photoshop in most situations, so from an overall perspective we saw no difference between the 5700 XT with PCIe Gen3 or Gen4. However, our Photoshop benchmark provides a "GPU Score" that is based on the performance of only the GPU-accelerated effects we test: 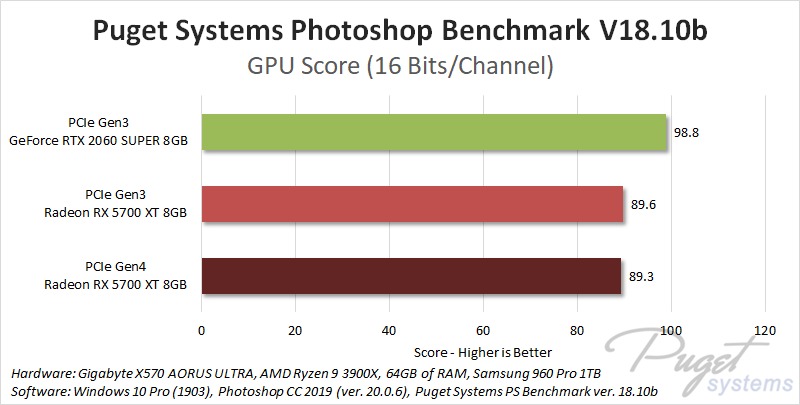 Unfortunately, even though the GPU Score is able to show a performance benefit from faster GPUs, we still saw no real difference between PCIe Gen4 and Gen3 with the Radeon 5700 XT in Photoshop.

With the AMD Radeon RX 5700 XT, we saw little to no performance advantage with PCIe Gen4 over Gen3 in most of our video editing benchmarks. The exception was DaVinci Resolve where we saw a 5% performance increase overall, and up to a maximum performance gain of 20% in one specific test. However, it is worth noting that even in the best case, the NVIDIA GeForce RTX 2060 SUPER scored on par or better than the 5700 XT even though it is limited to PCIe Gen3.

Keep in mind that PCIe Gen4 is in its infancy with only one platform (AMD x570) and a handful of mid-range GPUs like the AMD Radeon RX 5700 XT that support it. As higher-end video cards with Gen4 support become available, at some point we should start to see a larger performance benefit. When that will happen is anyone's guess, but there is certainly an argument for getting a PCIe Gen4 capable system strictly from a future-proofing standpoint.

At the moment, PCIe Gen4 likely isn't a major concern for video editors from a GPU performance standpoint. Technology is constantly changing and evolving, however, so it will be interesting to see how this changes as more powerful GPUs come out with support for PCIe Gen4.