Whenever we do GPU testing, we always look forward to benchmarking DaVinci Resolve since it has long been the best NLE at utilizing the power of your GPU. This means that more than almost any other video editing application, you typically want the best GPU (or multiple GPUs) that you can afford.

In addition, DaVinci Resolve Studio 16 has left beta which makes this round of testing even more interesting than normal. 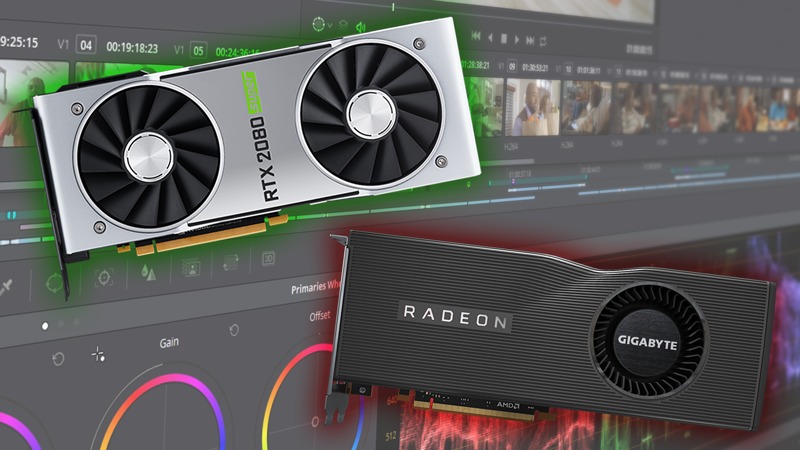 *All the latest drivers, OS updates, BIOS, and firmware applied as of August 9th, 2019

To test each GPU, we will be using the fastest platform currently available for DaVinci Resolve Studio – most notably the Intel Core i9 9980XE. This does mean that the AMD Radeon RX 5700 XT will not be able to utilize PCI-E 4.0, but we have an entire series of posts coming up that will be examining PCI-E 4.0 in professional apps like DaVinci Resolve. For that testing, we will be using the new Ryzen 3rd Gen platform since that is currently the only way to get PCI-E 4.0 functionality.

Our Does PCIe Gen4 improve GPU performance in video editing apps? article is now available looking at PCIe Gen4 performance with the AMD Radeon RX 5700 XT. In short, we saw a 5% increase in performance on average with Gen4 in Resolve. However, this was not enough of a performance increase to change the overall conclusion of this post.

The benchmark we will be using is the latest version of our (soon to be) public DaVinci Resolve Studio benchmark. With each test configuration, we made sure that the GPU processing mode was manually set to either CUDA (NVIDIA) or OpenCL (AMD) as well as having the GPU selected for hardware accelerated decoding of H.264/H.265 media and RED Debayer.

One thing to note is that since our 8K media benchmark requires ~20GB of VRAM in order to run without "out of memory" errors, we will only be running the 4K media and Fusion benchmarks for this test.

Full details on the benchmark is available at:

While our benchmark presents various scores based on the performance of each test, we also wanted to provide the individual results. If there is a specific codec or type of grade that is a hindrance to your workflow, examining the raw results for that task is going to be much more applicable than our Overall scores. Feel free to skip to the next section for our analysis of these results if you rather get a wider view of how each GPU performs in DaVinci Resolve. 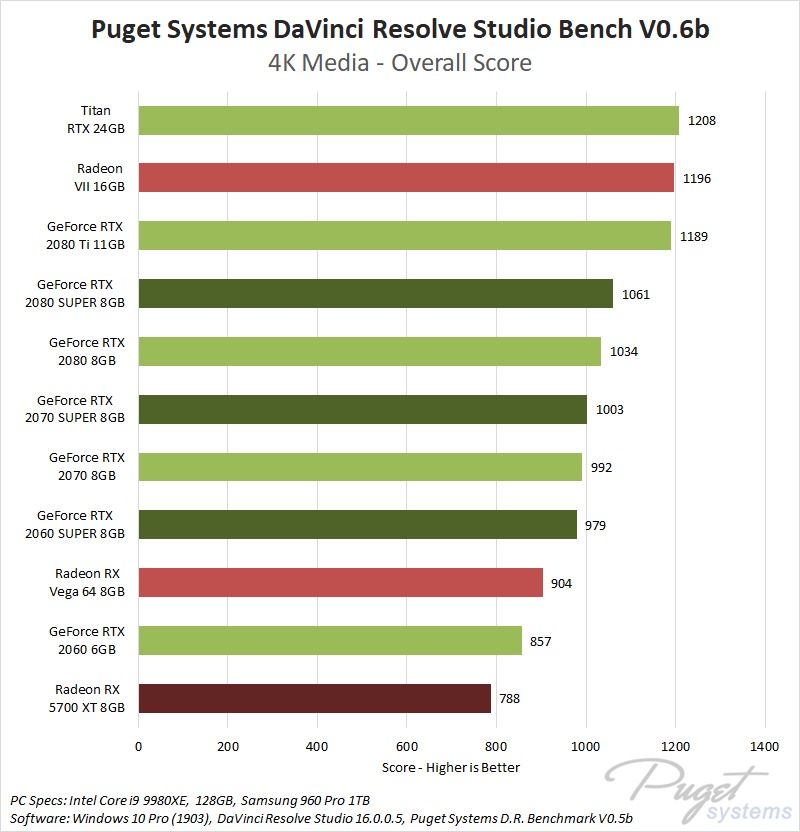 With the Overall Score from our 4K Media benchmark, we get a great look at how each of these cards perform in DaVinci Resolve Studio 16. Starting with the NVIDIA SUPER cards, the RTX 2070 SUPER and 2080 SUPER are slightly faster than the "normal" versions, but it is only be a few percent. The RTX 2060 SUPER, on the other hand, saw a terrific 14% performance gain. In addition, the increase from 6GB to 8GB of VRAM makes the RTX 2060 SUPER a much more attractive card since having enough VRAM is always a concern in Resolve.

The AMD Radeon RX 5700 XT 8GB, however, did not fare nearly as well. The (sadly EOL) Radeon VII 16GB still does terrific, which initially gave us high hopes for the 5700 XT. Unfortunately, the RX 5700 XT ended up at the very bottom of the chart with the Vega 64 8GB outperforming it by 15% while the similarly priced RTX 2060 SUPER was about 24% faster.

The performance with the 5700 XT reminds us a lot of what we saw in our Photoshop testing. In that case, our contacts at AMD noted that the Radeon RX 5700 XT currently includes software optimizations for gaming, but not yet for office/professional workloads. While it is possible that post launch software optimizations will improve performance in applications, we will have to wait to see if that happens. 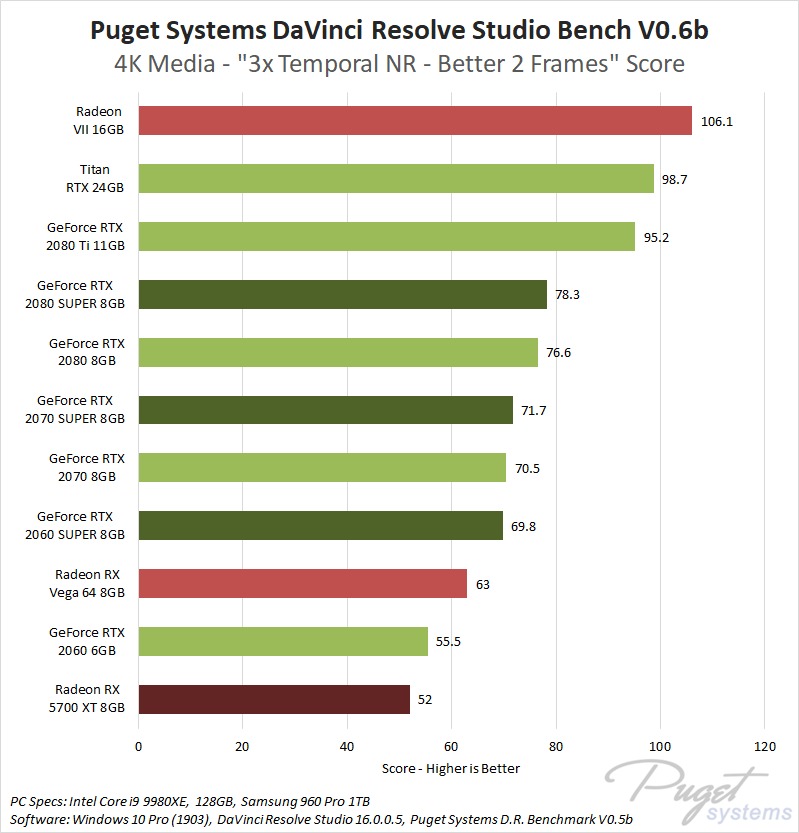 If we switch over the look at just the scores for the "3x Temporal NR" tests, we get a look at what should be among the maximum difference between each of these cards. Here, the RTX SUPER 2060 is actually 26%(!) faster than the standard RTX 2060, and the (EOL) Radeon VII manages to pull ahead of even the Titan RTX by about 8%.

Unfortunately, the Radeon RX 5700 XT 8GB continues to be at the bottom of the stack with the RTX 2060 SUPER 8GB outperforming it by about 34%. 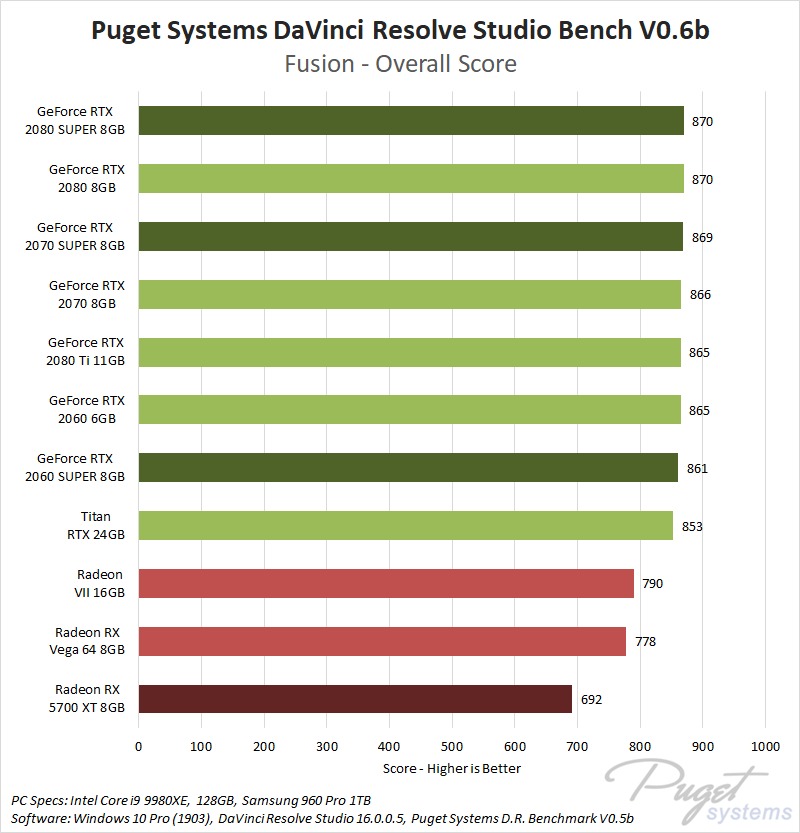 Fusion is interesting since it is a fairly recent addition to Resolve and so far, does not utilize the GPU to anywhere near the level of the Color, Edit, or Delivery tabs, Instead, it is much more dependent on the per-core performance of your CPU. Because of this, there is almost no difference between any of the NVIDIA cards we tested.

How well do the NVIDIA SUPER and AMD Radeon RX 5700 XT perform in DaVinci Resolve?

In DaVinci Resolve, the new RTX 2070 SUPER and 2080 SUPER are only marginally faster than the "normal" versions, but the RTX 2060 SUPER 8GB is on average about 14% faster than the normal RTX 2060 6GB. Considering the fact that these cards are typcially cheaper than their predecessors (other than the 2060 SUPER which is $50 more), this is overall a win for NVIDIA – especially on the low end.

The AMD Radeon RX 5700 XT 8GB, however, did not fare nearly as well. We can hope for driver optimizations to come in the future, but for now the previous generation Radeon RX Vega 64 8GB is about 20% faster than the new 5700 XT, while the RTX 2060 SUPER 8GB is about 24% faster on average.

What this means is that with the exception of the AMD Radeon VII 16GB (which is no longer being made), NVIDIA GPUs are the clear choice for anyone using DaVinci Resolve. While the exact performance gain over AMD changes based on the type of grade and codec used, the RTX 2060 SUPER 8GB is overall about 24% faster than the Radeon RX 5700 XT 8GB while the RTX 2070 SUPER 8GB is 11% faster than the Radeon RX Vega 64 8GB. This is a pretty significant lead for NVIDIA and one that is going to require a lot of work on AMD's part to overcome.

Keep in mind that the benchmark results in this article are strictly for DaVinci Resolve. If your workflow includes other software package (like After Effects, Photoshop, Premiere Pro, etc.), you need to consider how these GPUs will perform in those applications as well. Be sure to check our list of Hardware Articles for the latest information on how these cards perform with a variety of software packages.