Intel recently launched a new batch of Xeon W processors – the workstation side of their Xeon family. The previous generation of these CPUs was based heavily on Intel's enthusiast Core X series, with up to 18 cores and using the same socket 2066. This time around, Intel used their server-focused Xeon Scalable line as the basis for the new Xeon W processors, leading to models with up to 28 cores, six memory channels, and 64 PCI-Express lanes. We are testing these chips across a wide range of applications, but the focus of this article is on CPU-based rendering in V-Ray Next and how they compare up to other modern Intel and AMD processors.

For another look at this sort of use case, we also took a look at Xeon W performance in the native Cinema 4D renderer in another article.

We used the latest version of Chaos Group's V-Ray Next Benchmark for this comparison, and it includes tests for both CPU-only and GPU+CPU rendering. This is somewhat novel as most GPU rendering engines do not use the CPU at all – but in V-Ray Next, they have implemented CUDA emulation on the CPU to improve performance a bit. Even the fastest CPU doesn't add as much performance in this mode as a single high-end video card, but who would turn down additional performance during renders for no added cost?

With the information we have gathered, then, we put together three charts. The first is the CPU-only performance, the second is GPU+CPU, and the third is the CPU by itself but in GPU mode. The first and third charts, then, are really the most important when considering which CPU to pick for this application – depending on which rendering pipeline you plan to use. Please also note that the selection of CPU (and motherboard) will impact how many video cards you can use, so if you are going the GPU route you can fit more cards in systems which use higher-end processors.

Here is a gallery of the results from V-Ray Next Benchmark 4.10.02, color-coded based on CPU family. The new Intel Xeon W models are purple, while Intel's various Core models are blue, and then AMD Threadripper chips are shown in orange and AMD Ryzen is red. 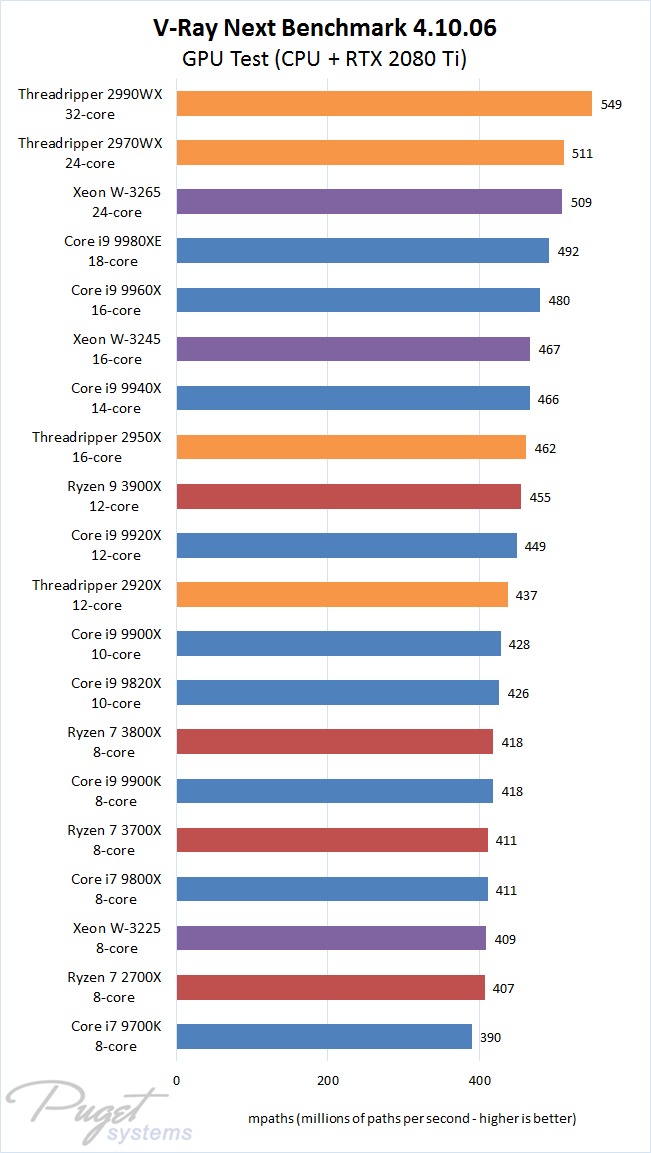 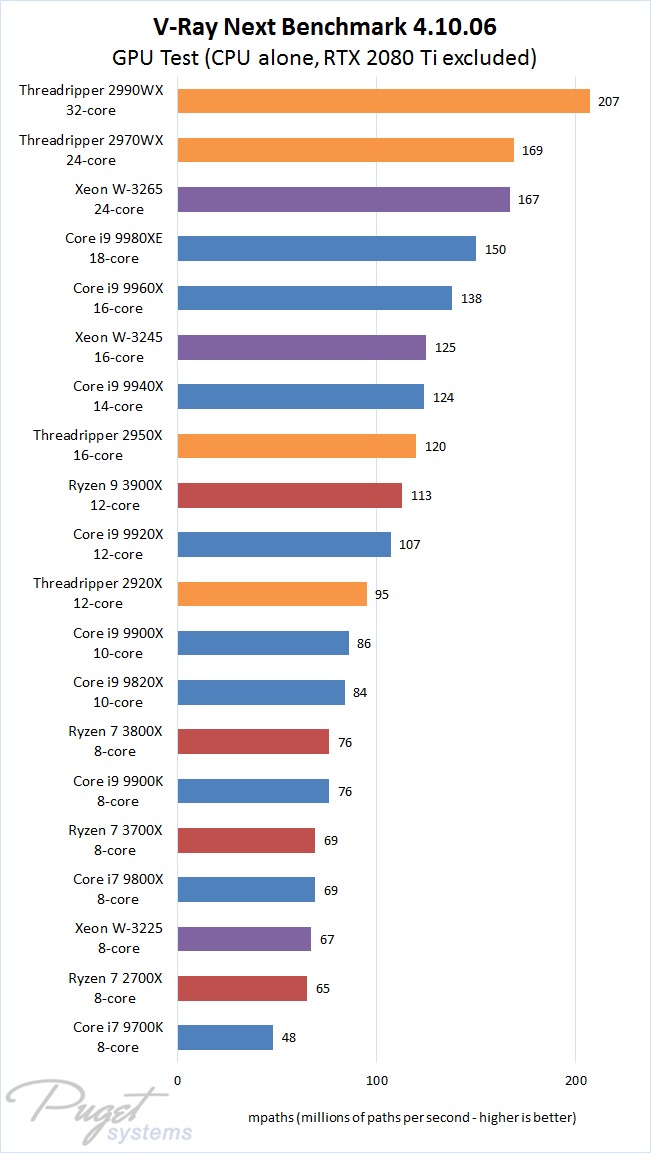 In CPU mode, shown on the first chart, Intel's Xeon W-3265 took the top spot – and it isn't even the top of the line model in this series! That honor goes to the W-3275, which we don't have a sample of, and it would be even faster… probably scoring in the 35,000 to 37,000 range in this benchmark. Oddly, AMD's Threadripper chips don't seem to perform very well in this particular rendering pipeline.

GPU mode, however, flips the tables a bit. On the second and third charts the CPUs are running CUDA emulation code so that they can mimic the behavior of a video card, and in this workload the Threadripper processors excel. The new Xeon W chips performed on-par with Threadripper models of the same core count, so I would expect the 28-core W-3275 to score a little shy of the 32-core TR 2990WX. 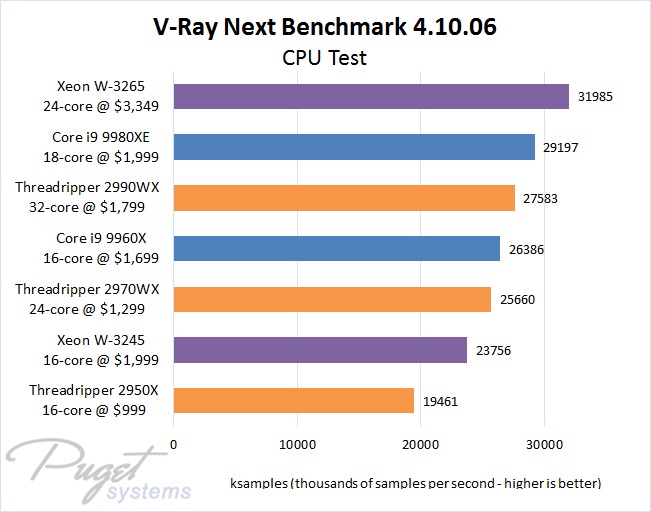 The new Xeon W-3265 was the fastest processor we tested in this roundup, for V-Ray Next's CPU mode, and the W-3275 that we didn't have available would be faster yet. However, they may not be the best choice for everyone because of their high price and the scarcity of workstation-oriented motherboards for them. In terms of price:performance ratio, AMD's Threadripper 2990WX was faster than the W-3245 for less money – and in order to get the higher core count Xeon models that would beat the 2990WX you'd have to spend an additional $1500 or more. On the other hand, Xeons do support higher amounts of memory – so if your projects are complex enough to need more than 128GB of memory these new Xeon models might be a viable option. 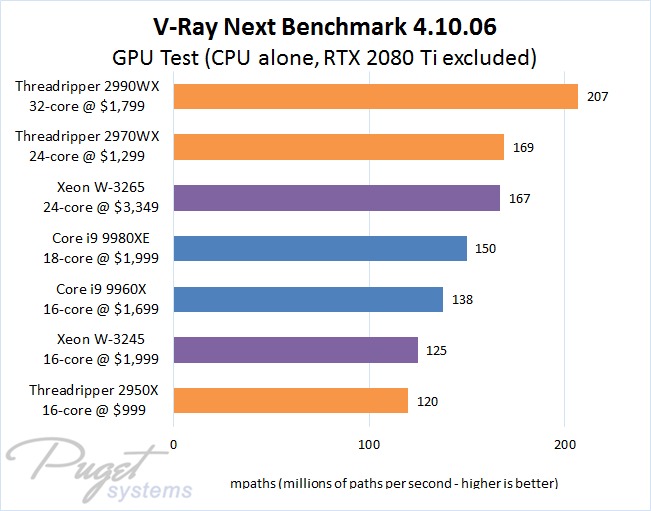 If you are planning to use the GPU side of V-Ray Next, then the 64 PCI-Express lanes offered by these Xeons are tempting because of how many video cards that will support… but you can get similar multi-GPU capabilities with Threadripper for a lower price. Moreover, if you want to use the CPU alongside GPUs, Threadripper gives better CUDA emulation performance than any Intel CPU we tested.