Intel recently launched a new batch of Xeon W processors - the workstation side of their Xeon family. The previous generation of these CPUs was based heavily on Intel's enthusiast Core X series, with up to 18 cores and using the same socket 2066. This time around, Intel used their server-focused Xeon Scalable line as the basis for the new Xeon W processors, leading to models with up to 28 cores and six memory channels (up from four on the last generation). We are testing these chips across a wide range of applications, but the focus of this article is on CPU-based rendering in Cinema 4D and how they compare up to other modern Intel and AMD processors.

We also took a look at performance in V-Ray Next in another article, for those who use that engine instead of the native C4D renderer.

Cinebench R20 was run three times on each of the new Xeon processors, and the fastest result was used for our chart below. The other CPUs had all been tested recently for our Ryzen 3rd Gen article, so we just brought those results over directly rather than re-run them.

Here is a chart with the full results, color-coded based on CPU family. The new Intel Xeon W models are in purple, while Intel's various Core models are in blue, and then AMD Threadripper chips are shown in orange and AMD Ryzen is red. 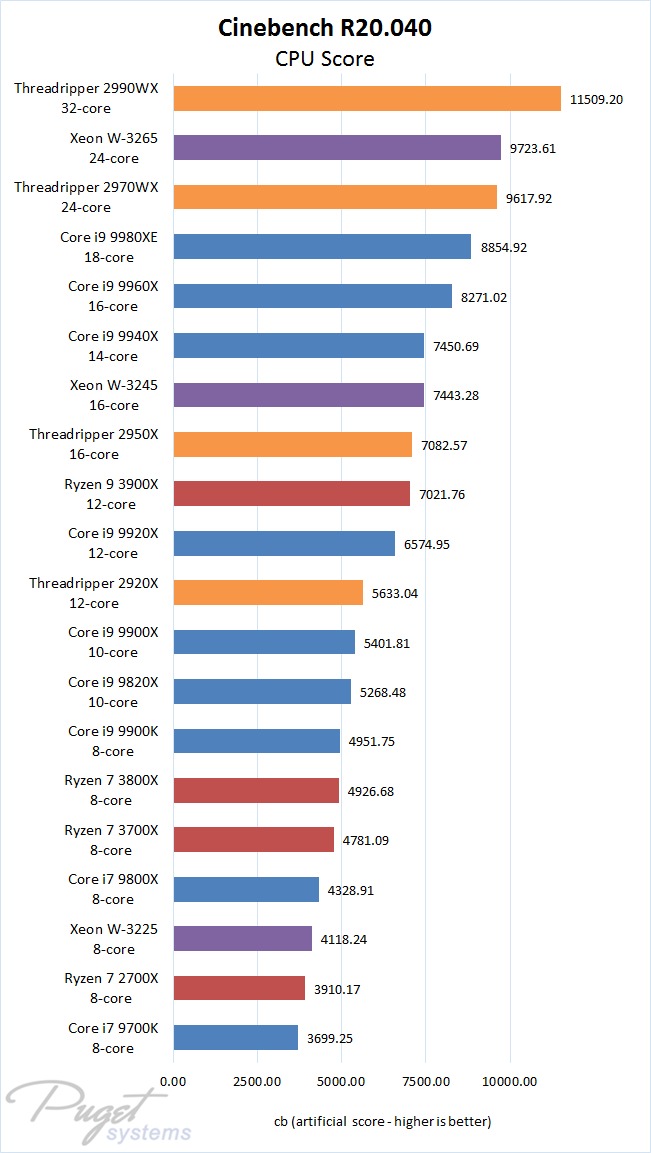 Intel's new Xeon W processors perform pretty closely to AMD's Threadripper models at the same core counts. We don't have the top-end 28-core model (W-3275) to test, but given its specs I would expect it to come in just shy of the 32-core TR 2990WX. Considering the much higher price tag on the Xeon chips, that isn't a great deal - unless you need the higher RAM capacity they offer. Getting ahold of a workstation-oriented motherboard for these Xeons is also a lot harder, and that is something which may hold us up from carrying them.

What strikes me as a bit odd, though, is that Intel's Core X chips outperform these new Xeons at similar core counts. This updated Xeon W line has more memory bandwidth - six channels instead of four - and at the 16-core size has higher base and turbo clock speeds as well... so I cannot figure out why the W-3245 is a full 10% behind the Core i9 9960X. AMD's Threadripper 2970WX beats them both in terms of price and performance, though, so I guess it is a moot point in this particular workload. 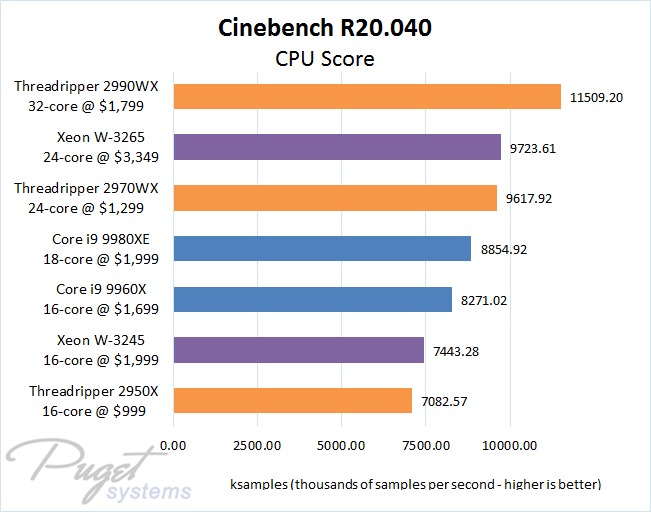 The new Xeon W processors perform reasonably well when rendering in Cinema 4D, but you can get similar performance for a lower price with AMD's Threadripper line. Those Threadripper chips aren't as fast at single-threaded workloads though, like modeling and animation within Cinema 4D, so which CPU is best for you will depend on how much of your time is spent performing different tasks.