Skip to content
Always look at the date when you read an article. Some of the content in this article is most likely out of date, as it was written on August 9, 2019. For newer information, see our more recent articles.

V-Ray Next, from Chaos Group, is made up of a pair of rendering engines: one that uses the CPUs (processors) and another which focuses on GPUs (video cards). We have already tested modern CPUs on V-Ray, using the benchmark utility they make publicly available, but since GPUs can be utilized too it is important to look at how various video cards perform as well.

With the launch of NVIDIA's new GeForce RTX "SUPER" series of video cards, we are taking a look at how the whole RTX lineup performs on the GPU side of V-Ray Next. We are not including the CPU in this testing, so that we can focus on GPU performance alone.

Here is a list of the hardware we tested V-Ray Next on. Everything except the video card was kept the same throughout all the test runs, to ensure that no other specs could impact performance. The operating system was a fully updated installation of Windows 10 Pro.

Chaos Group provides an excellent benchmark for V-Ray Next, which is available for free (registration required) on their website. We ran this benchmark three times per video card, and are using the highest scores for each GPU in the graphs below.

Here are the V-Ray Next Benchmark 4.10.06 results (in millions of paths per second) for all of the GeForce RTX video cards, along with the TITAN RTX for good measure, sorted from most to least expensive – with the new SUPER series cards in a darker shade of green: 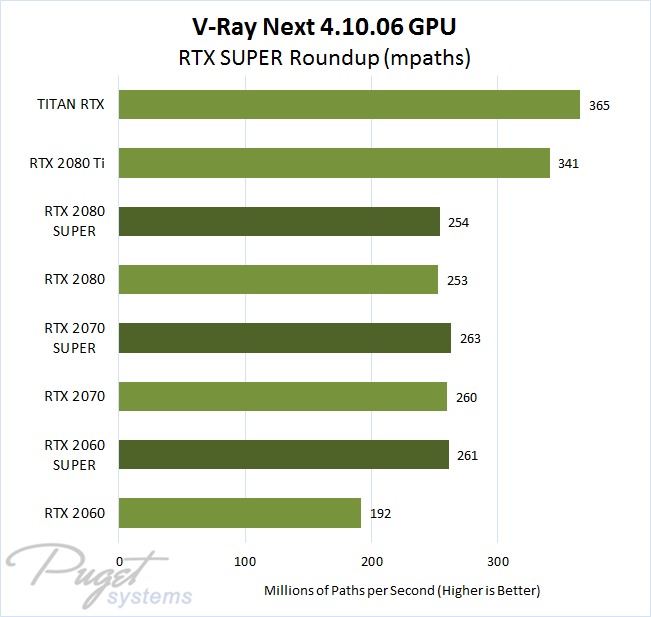 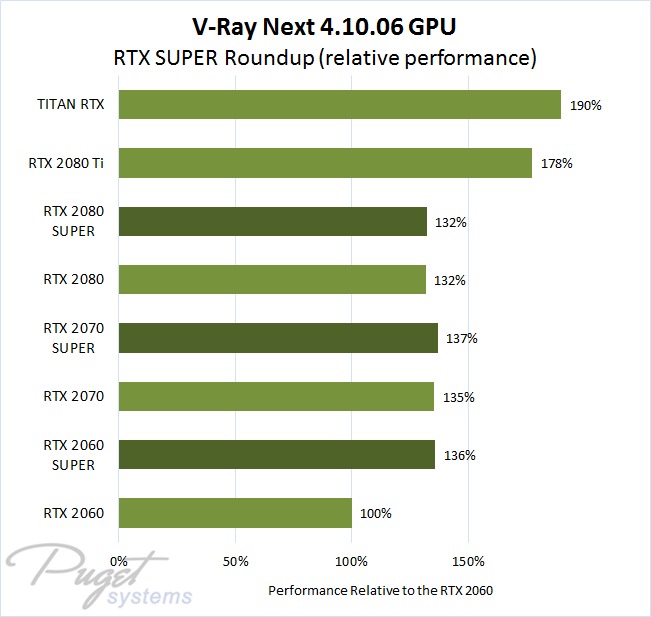 V-Ray Next seems to behave differently from other GPU rendering engines we have tested recently, and in particular shows no tangible performance benefit from using the new RTX 2070 SUPER or 2080 SUPER cards compared to the non-SUPER models. However, the RTX 2060 SUPER does show a big improvement over its namesake… and in fact, it performs just as well as the other, more expensive SUPER cards. Considering that it has the same amount of VRAM as well (8GB vs the RTX 2060's 6GB) that makes it a fantastic value!

On the high end, the RTX 2080 Ti and TITAN RTX are less than 10% apart in performance – and since the TITAN costs more than twice as much, and is only available in a dual-fan layout, the 2080 Ti is usually going to be the better choice there. If you need more VRAM than it offers, the Quadro RTX series has options beyond even what the TITAN provides and works great in multi-GPU configurations.

Conclusion: What Are the Best Consumer GPUs for Rendering in V-Ray Next?

Because of the Titan RTX's cooling limitations, and how well V-Ray and other GPU rendering engines can scale across multiple cards, the best choice for many users is going to be the GeForce RTX 2080 Ti. If that is a little too expensive for you, the new GeForce RTX 2060 SUPER also offers great performance for the price – on par with the various 2070 and 2080 models at a much lower price.

Don't forget that V-Ray Next GPU can also utilize the CPU to further boost performance, so pairing a few of those cards with a powerful CPU will give you even faster rendering speeds.