Skip to content
Always look at the date when you read an article. Some of the content in this article is most likely out of date, as it was written on July 22, 2019. For newer information, see V-Ray Next CPU Roundup: AMD Ryzen 3, AMD Threadripper 2, Intel 9th Gen, Intel X-series

AMD's new Ryzen 3rd generation processors feature both an increase in core count and per-core performance, both of which directly improve rendering speeds in V-Ray Next. In this article we will take a look at how they stack up to other AMD and Intel processors in this application, both in the pure CPU and GPU+CPU render pipelines. We also took a look at rendering in Cinema 4D in another article.

We used the latest version of Chaos Group's V-Ray Next Benchmark for this comparison, and it includes tests for both CPU-only and GPU+CPU rendering. This is somewhat novel as most GPU rendering engines do not use the CPU at all – but in V-Ray Next, they have implemented CUDA emulation on the CPU to improve performance a bit. Even the fastest CPU doesn't add as much performance in this mode as a single high-end video card, but who would turn down additional performance during renders for no added cost?

With the information we have gathered, then, we put together three charts. The first is the CPU-only performance, the second is GPU+CPU, and the third is the CPU by itself but in GPU mode. The first and third charts, then, are really the most important when considering which CPU to pick for this application – depending on which rendering pipeline you plan to use. Please also note that the selection of CPU (and motherboard) will impact how many video cards you can use, so if you are going the GPU route you can fit more cards in systems which use higher-end processors. 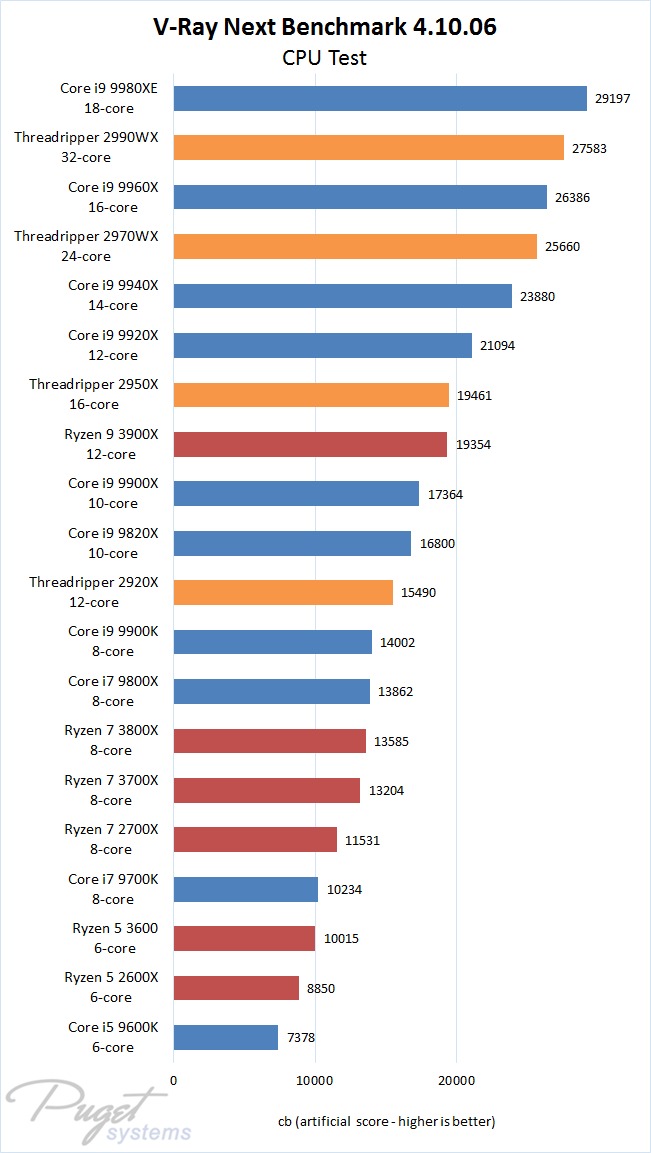 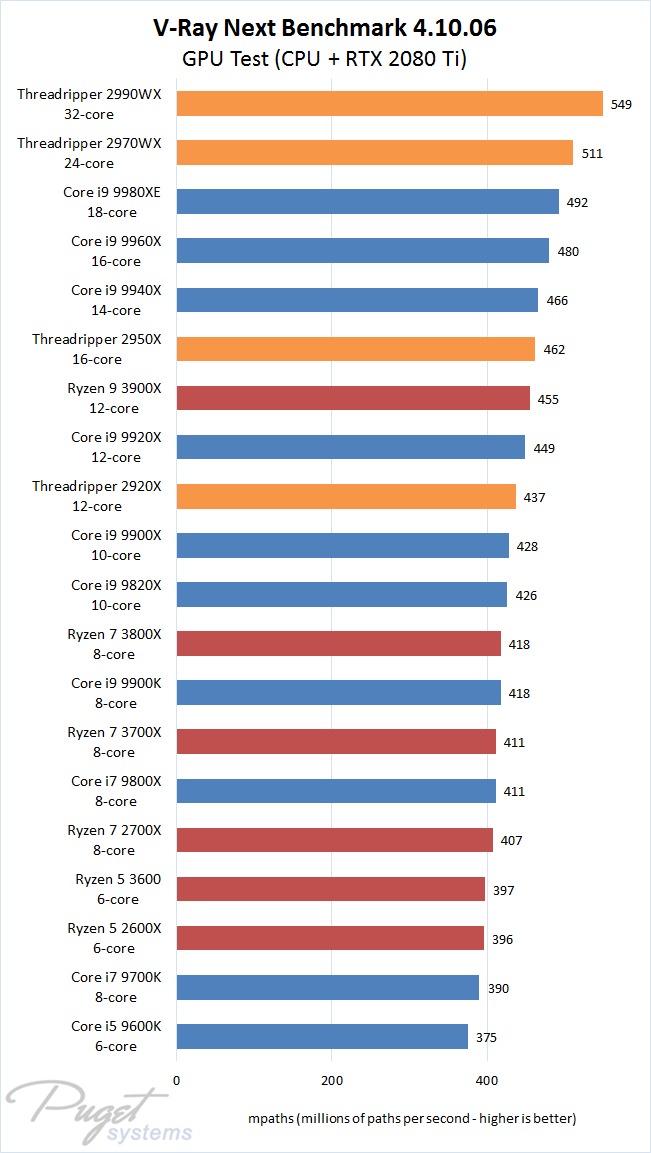 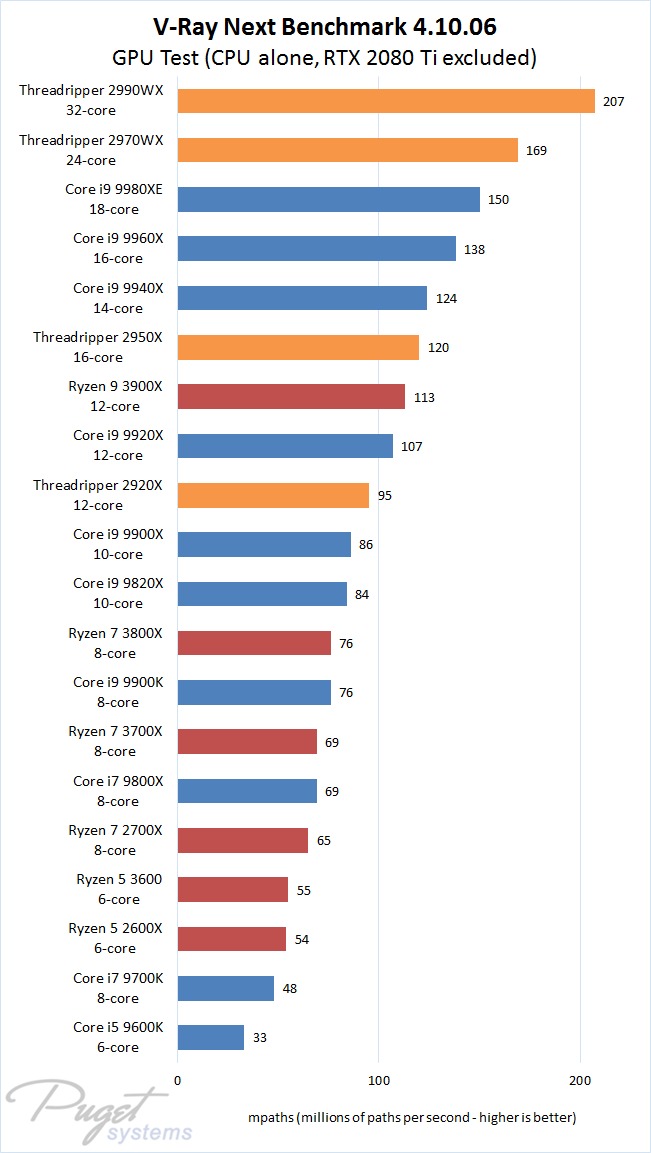 In CPU mode, shown on the first chart, Intel's Core X and AMD's Threadripper processors lead the results – which makes perfect sense, given their high core count. However, the new 12-core Ryzen 9 3900X does remarkably well too: it matched the performance of the 16-core Threadripper 2950X for a couple hundred dollars less! The 8-core Ryzen 3rd Gen chips didn't quite match Intel's processors with the same core count, but they are very close – far closer than the 2nd Gen 2700X, which is about 15% further behind.

GPU mode, best shown in the third chart, seems to be even better threaded… and it looks like AMD's architecture is also more favorable. Here, the biggest Threadripper CPUs take the top spots by a wide margin – and the Ryzen 9 3900X beats Intel's Core i9 9920X as well. 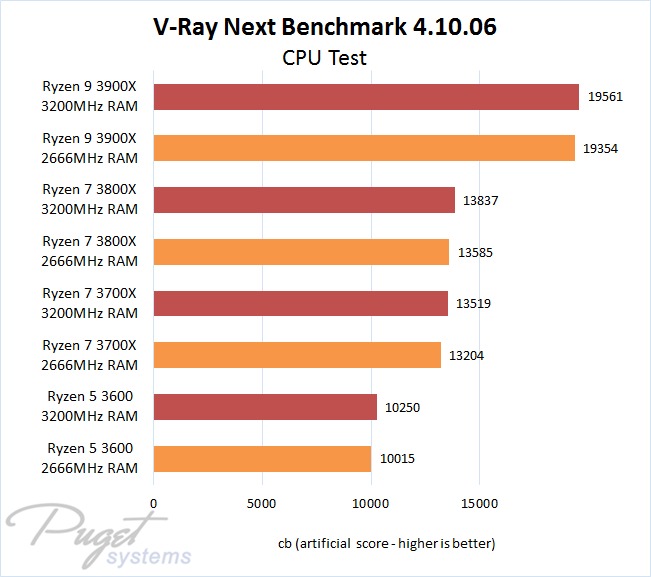 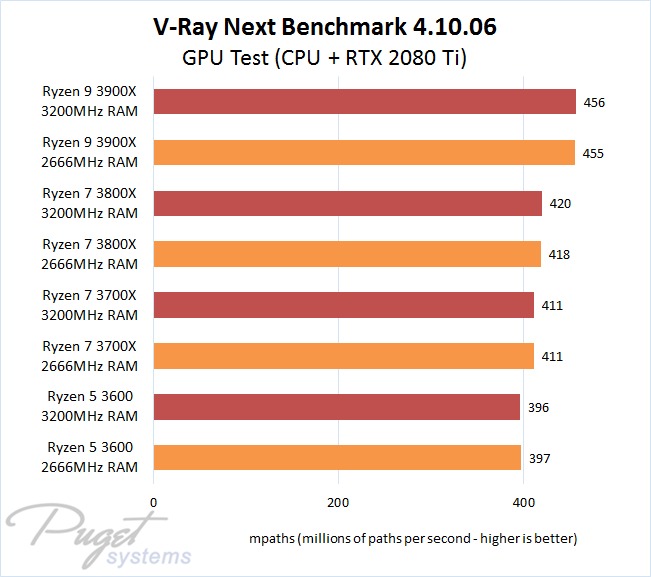 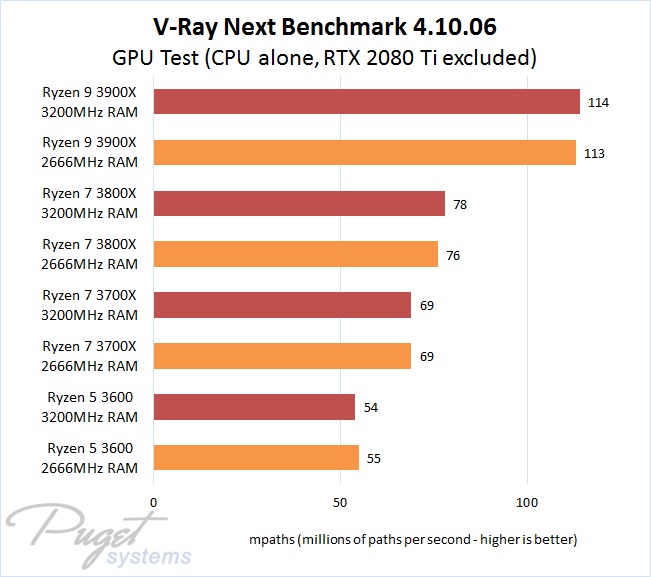 In CPU mode, there is about a 2% performance increase going from 2666MHz to 3200MHz – which is close to the margin of error, but since it was steady across all four processors we tested I think it is safe to say that there is a *very small* benefit to faster memory in this situation. However, to officially stay within AMD's support specs and still use 3200MHz memory would mean only having two sticks of memory… which would mean a limit of 32GB at this time (2 x 16GB), and if you are rendering large or complex scenes that might not be enough. Having renders take 2% longer seems a small price to pay for being able to fit a lot more RAM into the system.

Over on the GPU tests, the two higher-end chips seem to have a similar performance gain – but the others didn't see any benefit. The resolution on results is a lot smaller here, though, with only 2-3 significant digits… or it may just be within margin of error.

With that said, though, there are even faster CPUs available for this sort of workload… so if you have the money to spend, a top-end Intel Core X or AMD Threadripper will render frames more quickly. Those CPUs also support more PCI-Express lanes, so if you plan to use V-Ray Next GPU they will enable more video cards as well as providing more processing power on their own.