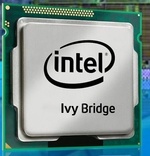 Intel's new 22nm CPUs - codenamed Ivy Bridge - are finally launching. When combined with the recently released 7-series chipsets, this new CPU/Chipset combination provides support for PCIe 3.0 and USB 3.0 as well as allowing RAM up to speeds of 1600MHz to be used natively. Ivy Bridge CPUs will function in many of the previous generation of socket 1155 motherboards (although a BIOS update is generally required) and the previous generation CPUs (Sandy Bridge) are also usable in most of the new 7-series chipsets which provides plenty of upgrade routes for consumers.

While the frequency range of these CPUs is not much higher than the previous Sandy Bridge CPUs, the main improvements to this new line lie in the improved onboard graphics, smaller manufacturing technology, and reduced thermal output. These improvements make Ivy Bridge much more attractive for systems that will be utilizing onboard graphics and should allow the CPUs to run at much lower temperatures. A CPU running at a lower temperature will not only be more stable and consume less power but should also allow for an overall quieter system.

At launch, the following desktop and desktop low power CPUs will be available:


The standard desktop CPUs have stock frequencies ranging from 3.1GHz to 3.5GHz with Turbo frequencies ranging from 3.5GHz to 3.9GHz. All of the models have four cores, support PCIe 3.0, and have a thermal output of 77W. The amount of Smart Cache is either 6MB for the i5 models or 8MB for the i7 models. Hyperthreading is only supported on the i7 models and for those that use vPro (hardware-based remote access), it's worth noting that only the i7-3770 and the i5-3550 include vPro support.

Below is a quick breakdown of some of the major features of Ivy Bridge versus the previous generation Sandy Bridge with the improvements in red:

*not supported on all CPU models

Starting from the top, Ivy Bridge has a lower TDP which is largely due to the smaller process technology. This should result in lower operating temperatures which in turn allows for quieter operation. The memory support has been upgraded as well from 2 channels of DDR3-1333Mhz RAM to 2 channels of DDR3-1600Mhz RAM.

The last two improvements are the addition of PCIe 3.0 support and an improvement to the onboard graphics. At launch, all of the Ivy Bridge CPUs will support PCIe 3.0, but some of the future budget-oriented CPUs may not. The improved graphics is a major feature of these new CPUs and allow for onboard graphics to be used across a much broader range of applications.

The improved graphics makes Ivy Bridge CPUs much more desirable for use in workstations where only moderate graphical power is needed. The upgraded graphics also allows for triple displays which is great when large amounts of screen real estate is needed. While likely still not acceptable for most gamers, the improved graphics is certainly a step in the right direction for Intel.

The budget-friendly B75 chipset has only one SATA 6GB/s port, two less USB 2.0 ports and does not support RST, but the other three chipsets are very similar to each other. The only major difference between the H77, Z75 and Z77 chipsets is how the PCIe graphics lanes can be divided and the lack of CPU overclocking on the H77 chipset. One thing that is worth pointing out is that none of the current 7-series chipsets support vPro. In the past, vPro support has generally been found on the Q revision of Intel's chipsets, but at the time of this article Intel has not yet launched any Q-series chipsets.

Compared to the Z68, all of the 7-series of chipsets add native USB 3.0 support and an additional two SATA 3Gb/s ports. While not listed in the above chart, there are some more minor features that are only available when you combine an Ivy Bridge CPU with a 7-series chipset. This includes Intel Identity Protection Technology, Anti-Theft Technology, OS Guard (Windows 8), and Secure Key. Most users will not use any of these features, but those that will should know that they are only available with the 7-series motherboards.

Many consumers will simply look at the frequency of these new CPUs and dismiss them as being no better than the previous generation Sandy Bridge CPUs. Once you get into the details, however, you can clearly see that while the raw CPU power may not have improved by a huge amount, the introduction of PCIe 3.0 and DDR3-1600 RAM support will provide a very nice performance improvement when combined with compatible hardware.

Before Ivy Bridge, AMD had a pretty firm handle on the onboard graphics market with their A-series APUs (a combination of a CPU and a GPU). With the improvements to the built-in graphics on Ivy Bridge, Intel has greatly narrowed that gap and is once again a contender for use in systems that do not need a dedicated graphics card, but still need a bit of graphical power. While most gamers still will not be satisfied with the performance of any onboard graphics, the improved onboard graphics on Ivy Bridge is roughly on par with low end discrete GPUs in the $50-$60 range. While not discussed in this article, Anandtech did a very thorough review of the onboard graphics performance of the i7-3770K that we recommend checking out for more information.