Unsupported: How to Make Dual NVLink Work on Windows 10

With the current Turing-based generation of GeForce and Quadro cards, NVIDIA offers a method of physically connecting pairs of cards to enable direct communication between them. This facilitates SLI for gaming and similar applications, and can allow direct memory access between the cards for scientific computing and rendering (if the software supports it). NVIDIA calls these physical connectors "NVLink Bridges", and outside of gaming (where SLI is the more focused-on term) they use the NVLink name to refer to both the technology and the connection itself. I have written a lot about NVLink in the past, including how to enable and test it in Windows, as well as which bridges will work with which cards.

But what if you want to have more than two video cards? In my early testing I included a setup with four cards in two NVLinked pairs - and it worked just fine. Ever since that time, I had assumed this was the way things were supposed to work - and we even sold such configurations on occasion! - until recently we had an order come through for a setup with four GeForce RTX 2080 Ti cards, and it wasn't working as expected. I got involved because of my past experience with testing this stuff, but the latest NVIDIA drivers just would not cooperate at all. We got it working on an older driver revision, but then found that Windows would immediately update the driver... and while we had some leads to preventing that, it wasn't really something we could stand behind a customer using in the field.

In light of that experience, I've taken time in the last couple of weeks to go through and test several different NVIDIA drivers on two configurations: four GeForce RTX 2080 Ti cards as well as four Quadro RTX 6000s, both set up in two physically bridged pairs. In this article I will chronicle what I found worked, what didn't work or behaved oddly, and where we are at with this as a company as a result.

Here is the hardware platform I used for testing, a rare motherboard with enough PCI-Express slots to actually set this up: 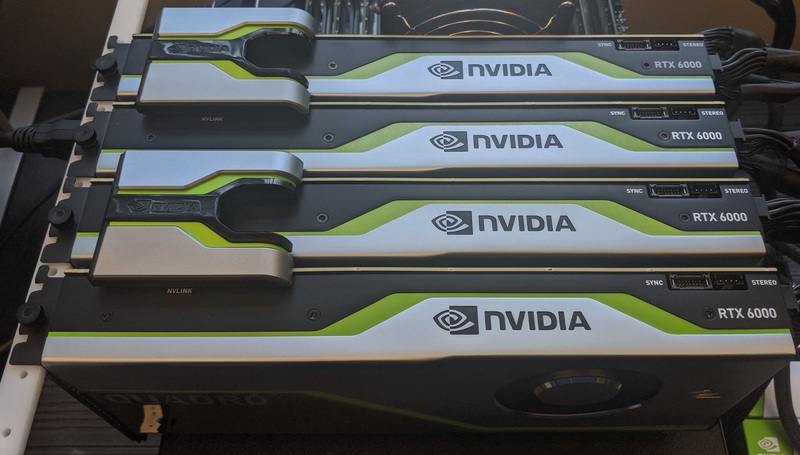 That's a lot of horsepower!

My test process was fairly simple:

The expected behavior, for a driver which should allow the system to use both pairs of cards in SLI / NVLink, is for NVIDIA Control Panel to show the four cards being in two SLI pairs, as in the screenshot below: 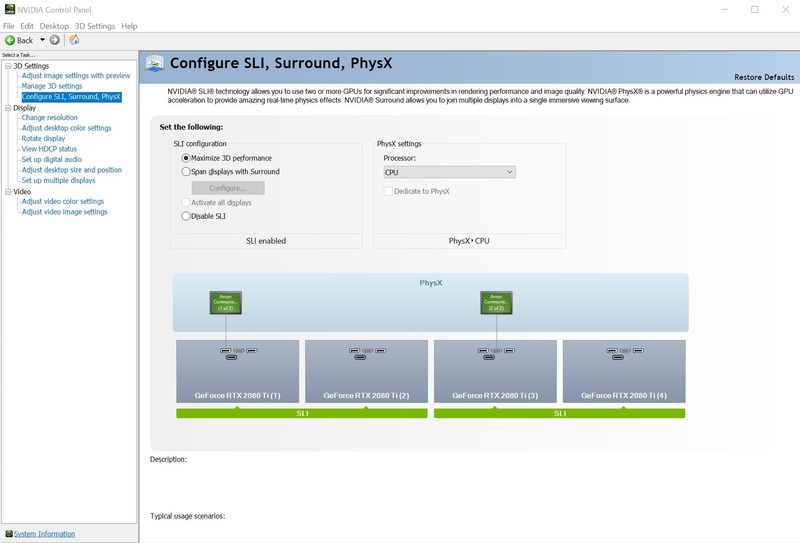 Something else worth noting on that screenshot is that one card in each pair has a monitor connected to it. That is required in Windows for a pair of cards to be put into SLI, so a setup like this requires either two monitors, two separate connections to a single monitor, or one real monitor plus a dummy dongle that fakes the presence of another monitor.

Here is a table showing the driver versions I tested and their behavior. To save space, I have grouped together sequences of drivers that functioned the same:

I was disappointed to find that for several driver revisions this feature has not worked, though it did when these cards were first launched (I have records of the older drivers working, even though they now have trouble with background processes in Windows) and even up through the first Studio driver release it was perfectly functional. One of my coworkers reached out to NVIDIA with this information, to see what they had to say, and we got word back that this feature is not supported on GeForce cards, and the fact that it worked in the past was unintentional. After all the testing this did not surprise me, though again it did disappoint, and it can somewhat be inferred from the fact that no 2-slot NVLink bridges exist that are GeForce branded. To do this testing at all, we had to use Quadro branded bridges - as listed in the Test Hardware section, and as shown in the image below. 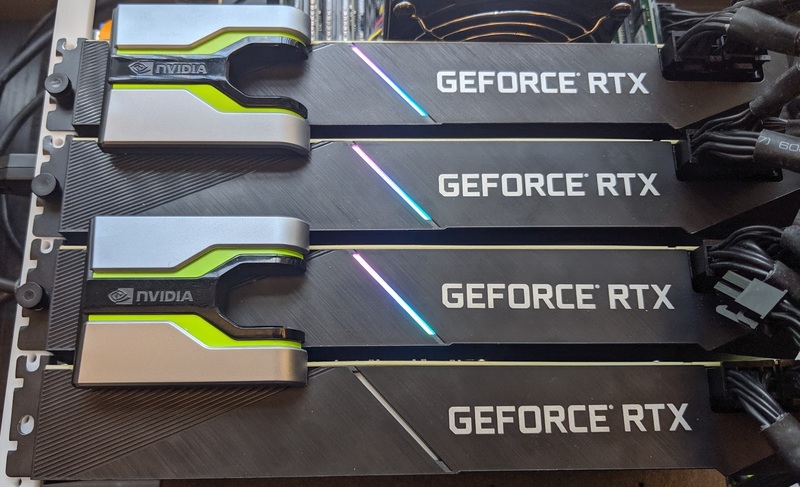 One of the cards had a defective LED, but worked fine otherwise

This brings up a great question, though: does this feature work on Quadro cards? After all, there are 2-slot bridges that NVIDIA sells for them, thus enabling (physically, at least) such a setup without having to go outside of their official branding. To find out, I did similar testing with a handful of Quadro driver releases - sticking mostly to the latest version of each driver family (the first three digits of the driver version). The results are shown in the same style of table:

Until that last driver test, I had high hopes that this type of configuration would be properly supported by NVIDIA on Windows... but it looks like that is not the case. We haven't yet gotten official word from NVIDIA about whether this is supposed to work or not, but I am guessing not given that the latest drivers don't behave (plus the odd results from the version before that). So where does that leave us?

Can you make two pairs of NVLink cards work in Windows 10? Yes, by using older drivers... but Windows may update them at any time, potentially messing up the configuration. You also wouldn't be able to utilize improved performance or added features from newer drivers, and there is no guarantee that future versions of Windows will work with the older drivers. All in all, not a great solution.

No, due to fact that the latest drivers do not behave with this sort of configuration - and that NVIDIA has said they don't support it - we can no longer offer dual pairs of NVLinked graphics cards in Windows. One pair is doable, with the proper motherboard, chassis, and power supply... and we do offer configurations with three or four video cards, just not in NVLink.

I should also note that both GeForce and Quadro cards have worked in NVLink just fine under Linux, and don't even need any special work done to enable that (like putting the cards in SLI, which is required in Windows). This could always change if NVIDIA alters the behavior of their Linux driver, but for now that is the way to go if you absolutely must have this setup.