As of this writing the NVIDIA GeForce GTX 680 is the fastest single GPU gaming video card available. It bests the Radeon HD 7970 in most tests, and while the GTX 690 is faster it is only because it is two GPUs on a single card. In its reference design, NVIDIA equipped the GTX 680 with 2GB of video memory (VRAM) and it performs extremely well with that. However, several of the brands that make video cards with the GTX 680 chip are now offering 4GB versions! This doubling of the VRAM comes at an added price, and certainly appeals to those who think bigger numbers must be better... but is that really the case? Does doubling the memory on a video card of this caliber actually improve game performance, and if so under what circumstances?

In order to answer these questions, we ran a series of gaming benchmarks on a fairly high-end system. The core specs were as follows: 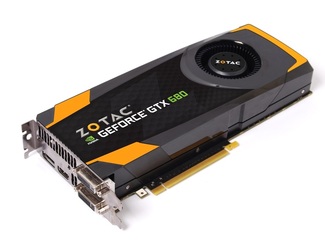 As you can see listed above, two Zotac GeForce GTX 680 video cards were tested: one with 2GB of video RAM and another with 4GB. We wanted to test both a fairly typical resolution as well as something much more demanding, so all of the tests were run on a single 27” 1920x1080 monitor first - and then a second time on a set of three such monitors, in NVIDIA’s Surround View mode for a combined 5760x1080 resolution.
The tests we ran were as follows:

With the descriptions out of the way, here are the results: 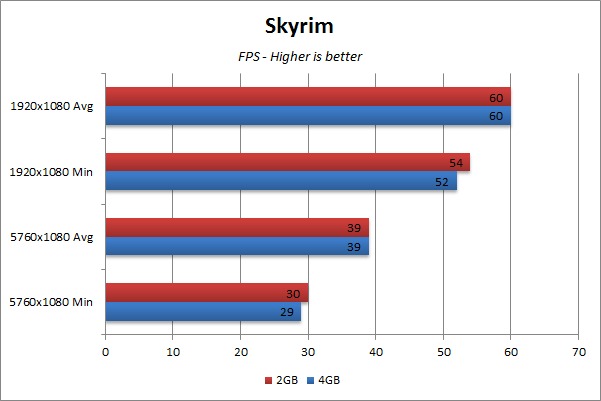 Skyrim turns out to not be very demanding on the video RAM, even with the high-res texture pack loaded. In full NVIDIA Surround mode across three screens the minimum frame rate dips only to the 30fps level - which is still very playable - but no significant difference existed between the 2GB and 4GB cards. Some small aberrations on minimum frame rates actually put the 2GB card ahead of the 4GB model, but the variance is so small that it is within the margin of error. 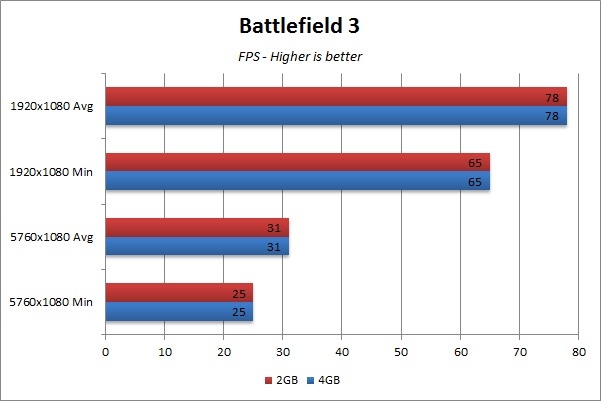 The test I ran in Battlefield 3 was less intensive than Skyrim on a single screen, but demanded more from the video cards when spanned across three monitors. In fact, if you want to run a three-screen setup with this game and maintain maximum settings, a dual GPU configuration would be a good idea. Still, though, no performance difference existed between the 2GB and 4GB cards. 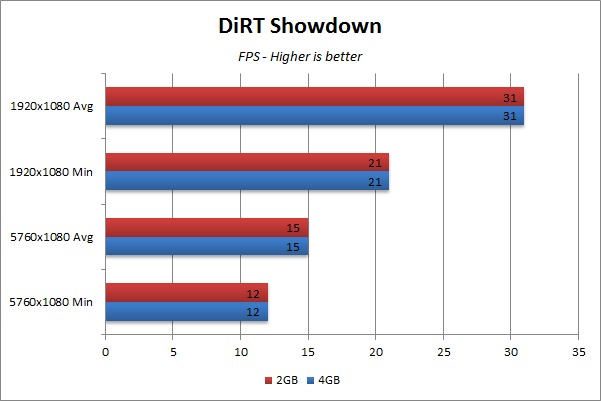 DiRT Showdown, the latest in a well-respected series of racing games, turned out to be the most punishing game test we ran. There was no difference between the 2GB and 4GB cards, but even on a single screen the frame rates in the benchmark were below what most gamers would consider smoothly playable. In all fairness, though, this game did have higher options we were able to set for things like AA than any of the other games. Still, beware of maxing out the settings on this with any single video card... or consider a dual GPU setup if you don't want to compromise at all on quality. 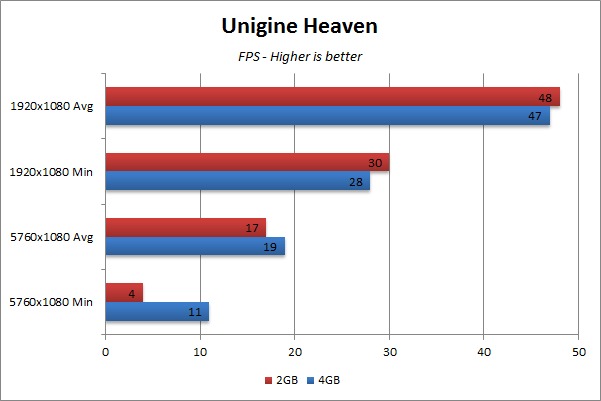 This is the only test where a difference between the 2 and 4GB cards showed up, and even here it was only at the higher resolution setting. When spanning three 1080P monitors in Surround mode, the 4GB card posted average frame rates about 10% higher and minimum frame rates nearly triple those of the 2GB card. It looks like in a test this detailed and with more than six million pixels being displayed that 2GB of video memory isn’t quite enough.

So, what can we glean from all of that? For one thing, with any single monitor the 2GB video card is plenty - even on the most demanding games and benchmarks out today. When you scale up to three high-res screens the games we tested were all still fine on 2GB, though maxing out some games’ settings at that resolution really needs more than a single GPU to keep smooth frame rates. With the right combination of high resolution and high detail, though, there is the potential for 2GB to be insufficient. For future games, or perhaps current games that were not tested in this article, you might be better off with a 4GB card if - and only if - you plan to run across a multi-screen configuration.