What is the Best CPU for Photogrammetry (2019)

Picking the processor, or CPU, is one of the most important decisions when building or buying a workstation - but there are dozens of options to pick from at any given point, with varying specifications and price points, so making the right choice isn't always clear-cut. Is Intel or AMD the way to go? How many cores do you need? Will a more expensive CPU be worth the cost? It can be overwhelming to keep up with all the possibilities, even for those who like to read up on the latest technology, and many review websites focus on game performance and artificial benchmarks rather than real-world applications. That is why we prefer to directly test the applications our customers use, and also offer free consulting to help potential customers know what the best system will be for their unique workflow.

Having recently tested the latest Intel Core X-10000 series and AMD Threadripper 3rd Gen processors, along with all the other major CPU launches from the past year, we can now look back and say what the best processors from 2019 are for a variety of applications. In the case of photogrammetry, we already have several articles for these new CPUs that examine how they perform in Metashape, Pix4D, and RealityCapture. In this final round-up for the year, though, we want to provide a more general overview - along with some solid recommendations for what processors are the best for this type of workload going into the new year. 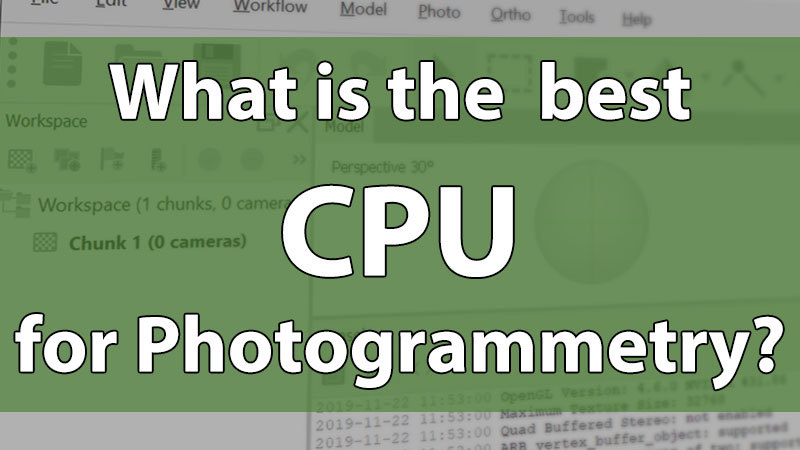 Since the goal is to make this article as widely usable as possible, I want to start with a brief description of what the CPU does - specifically in photogrammetry applications. In a nutshell, the CPU (or processor) is the 'brain' of a computer, and it is where the bulk of the calculations happen that turn a set of images into a 3D model and/or orthomosaic. As such, it is the most critical component when it comes to performance. Most photogrammetry software also uses the GPU (video card) to speed up processing in some areas, but that is limited to specific steps within the overall workflow and doesn't have nearly as much of an impact on overall performance as the CPU.

There are several aspects of a CPU that impact how fast it is, but it can be simplified into two main specifications: core count and frequency (clock speed). To break this down into simpler terms, we have a brief video that explains those concepts using a car analogy.

With that in mind, let's proceed to an overview of modern CPU performance in each of the three photogrammetry applications we test.

Pix4D is probably the most straight-forward of these software titles, as it benefits from both high clock speed and high core count. AMD's previous generation of processors struggled a bit here because they didn't match Intel on per-core performance, but these new 3rd Gen chips are fantastic - outperforming Intel's latest models even with fewer cores, as well as offering more cores at the top-end.

RealityCapture shows a similar trend to what we saw in Pix4D, but less pronounced. AMD still wins across the board, but the gap is not as wide - especially between the top Ryzen 9 model (3950X) and the Threadripper chips... and between the two CPUs in that series, the higher core count model does not always win out.

When it comes to Agisoft Metashape, though, things get really strange. In this application we see that high core count processors are far slower, even when their single-core speeds should be similar to lower core count CPUs that perform well. 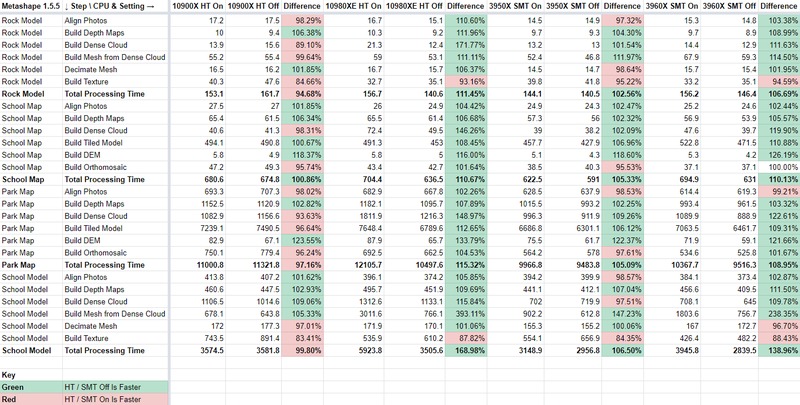 That chart is dense with data, and only covers four CPU models, but the key takeaway is that Intel's 10-core Core X 10900X benefits from having Hyperthreading enabled - but all three of the higher core count chips we tested (with 16, 18, and 24 cores) performed better with HT / SMT turned off. I'm not certain where the line is between CPUs that do better with and without that type of feature, but it looks to be somewhere in the 10-16 core range. If you already have a processor with more than 10 cores, and run Metashape, it is probably a good idea to test it with and without those features to see which way gives you better results. Our public benchmark is a great way to do that sort of comparison quickly, though you will need to look up how to toggle that feature in the BIOS of your system between test runs.

What processor should you use for a photogrammetry workstation?

After reviewing the data above, the answer to this question mostly comes down to your budget - but with some caveats regarding Metashape (if you use that application). Here is a list of the four CPUs we recommend for this type of workload, at varying price points:

* Don't bother with these CPUs if you only or primarily use Metashape, unless you work with massive projects and need >128GB of RAM

If we had to select one specific processor for the best overall performance and value across these applications, it would be AMD's Ryzen 9 3950X. It provides consistently great speeds in photogrammetry applications, and even in situations where the Threadripper chips pull ahead of it, there is still a viable case to make for it from a price-to-performance ratio standpoint.

One other thing to keep in mind is that Threadripper CPUs support for twice as much RAM: 256GB vs 128GB on Ryzen. Keep that in mind if you work on very large projects since insufficient memory can lead to reduced performance, especially in Pix4D and Metashape.

Hopefully, this post has helped you choose the right CPU for your photogrammetry workstation. Keep in mind that even with these recommendations, the right CPU for you may be different depending on the combination of programs you use and exactly what you do in those applications. If at all possible, we recommend speaking with one of our technology consultants (425.458.0273 or sales@pugetsystems.com) if you are interested in purchasing a Puget Systems workstation, as they can help you get the exact right system for both the work you do today and what you hope to do in the future.