Skip to content
Always look at the date when you read an article. Some of the content in this article is most likely out of date, as it was written on December 19, 2016. For newer information, see our more recent articles.

At Puget Systems, we have performed and published extensive testing looking at how different models of CPUs and video cards affect performance in After Effects but have not yet delved into the topic of storage. While After Effects does not need a particularly fast storage drive for your project files, for your disk cache it is generally recommended to use as fast of a drive as possible. Since "as fast as possible" is a nebulous term and the fact that a lot of the advice you commonly see is based either on anecdotal evidence or information that is vastly out of date, we wanted to perform our own testing to see if and when a faster cache drive will actually make a difference.

The three main tasks we will be looking at in this article are: 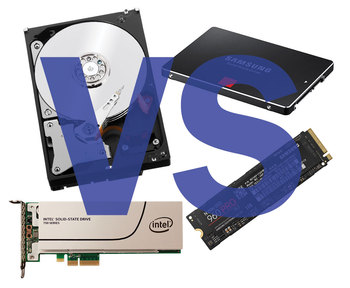 If you would rather skip over our individual benchmark results and simply view our conclusions, feel free to jump ahead to the conclusion section.

To see how different speeds of drives affect disk cache performance in After Effects, we used the following hardware and software:

Our test platform is based on the Standard Workstation from our After Effects Recommended Systems, with some of the highest-end hardware options in order to maximize the chance of finding any bottlenecks caused by the different storage drives. Since we are primarily concerned with how faster drives might affect performance, we will be testing four different hard drives with performance ranging from just 184 MB/s all the way up to 3,500 MB/s. While we will not be specifically testing any RAID arrays, the faster NVMe drives are also a great indicator of the performance you might see with a RAID array. In terms of raw performance these drives should be equal to anywhere from a 3-7 disk RAID0 array of SATA SSDs. 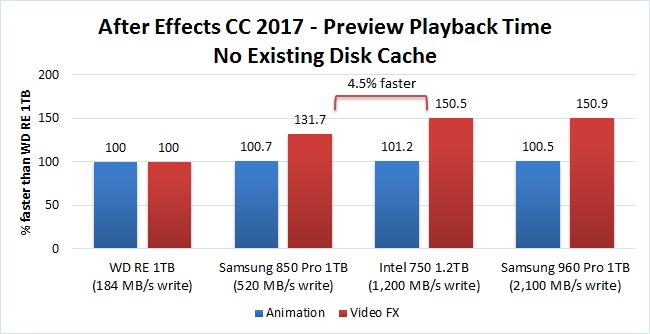 Interestingly, we saw little difference in playback time between the different drives for our animation-based projects. However, for the GPU-accelerated video FX projects we saw some decent performance gains. Using a SATA SSD instead of a platter drive allowed us to render a composition about 30% faster on average, although upgrading to a faster NVMe drive only increased performance by a small  amount. While the NVMe drives were 150% faster than the WD RE drive, this actually works out to being only 4.5% faster than the Samsung 850 Pro.

Since we just looked at how long it took to playback a composition without an existing disk cache, the next thing we want to test is how fast we can play a composition when a disk cache already exists. Where the last section was more a test of disk cache write performance, this is will measure how quickly AE is able to read the data from the cache drive. Note that none of our projects are able to be played back in real-time (even with a disk cache) which means that the disk cache is actively being used for all our testing. 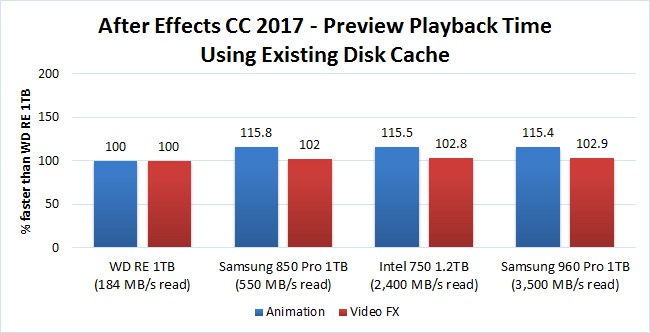 Depending on the amount of data that needs to be written, it is not unusual for After Effects to continue writing to the cache for anywhere from a few seconds to 20 minutes after you stop the playback. If After Effects is closed during this process, all the frames that have been rendered – but not yet been written to the cache drive – are lost and will need to be re-rendered from scratch the next time you work on your project. Because of this, it is very important to be able to finish writing the cache files as fast as possible. 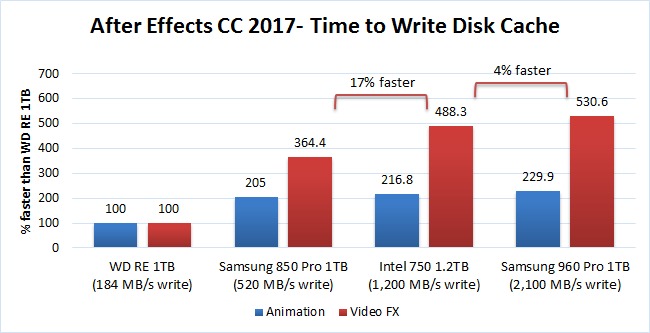 Writing to the cache drive is a fairly simple process of taking the render data from memory and writing it to the cache drive, so it makes sense that we saw some tremendous performance gains with the faster storage drives. Depending on the type of project, we saw on average anywhere from 200 to 360% faster write times with a SATA SSD compared to a platter drive. While the faster NVMe drives were in fact better than a SATA SSD, we clearly saw diminishing returns.

The chart above is normalized to the performance of the WD RE drive, so while the Samsung 850 Pro is ~3.5x faster than the WD RE drive and the Intel 750 is almost 5x faster, the actual difference between these two drives is actually much smaller than it first appears. This means that even though the Intel 750 is technically more than twice as fast as the Samsung 850 Pro it was actually only able to write the cache data about 17% faster at best and the Samsung 960 – which is just a bit under twice as fast as the Intel 750 – is actually only about 4% faster than that.

If you are trying to decide on what type of drive to use for your disk cache in After Effects, our testing has shown that it isn't as complicated as some make it out to be. Our testing can mostly be summarized with only two key points:

For most After Effects users, a SATA SSD is likely the best choice for you cache drive as the large performance gains make the investment more than worth it. Upgrading to a faster NVMe drive is a bit more of a difficult choice given that they are anywhere from 30-50% more expensive than a SATA SSD, but for those that want or need the best possible After Effects performance they are an easy way to get a bit more performance out of your workstation.

While it is perfectly fine to use a single drive for not only your After Effect disk cache but also any cache/scratch files for Premiere Pro , Photoshop or other programs, it is a good idea to have a dedicated drive for these files to keep them separate from your main project files. This doesn't tend to make a large performance difference in After Effects itself, but it can make a difference in other applications like Premiere Pro and is simply a good idea from an organizational standpoint.