Skip to content
Always look at the date when you read an article. Some of the content in this article is most likely out of date, as it was written on January 5, 2017. For newer information, see our more recent articles.

When Intel launches a new set of CPUs, the main question everyone wants to know is how much faster they are compared to the old CPUs. In this article, we will be tackling this question in terms of Lightroom performance by examining how the new Intel Core i7 7700K and i5 7600K perform compared to the previous generation Intel Core i7 6700K and i5 6600K. In addition, we will also look at a number of "High-End" Core i7 CPUs including the i7 6850K, i7 6900K, and i7 6950X.

There are a wide variety of tasks we could test in Lightroom, but in this article we will specifically be looking at:

You will notice that we are only testing one task in the develop module (scrolling through images). Performance when applying adjustments or using the brush in this module is a common source of frustration for Lightroom users, but are unfortunately also nearly impossible to benchmark. There is simply no feedback provided from Lightroom we can find that can be used to time these tasks accurately enough to be meaningful. If you have any ideas on how we could benchmark these (or other) tasks, we would love to hear them in the comments section. For now, however, we are limited to testing the Lightroom tasks that we can actually benchmark.

If you would rather skip ahead to our conclusions, feel free to jump right to the conclusion section.

To see how the new Core i7 7700K and i5 7600K perform in Lightroom, we used the following configurations:

These test configurations include three different platforms along with seven CPU models. For Lightroom, we typically would recommend a quad core CPU with a high frequency since most tasks in Lightroom can not efficiently take advantage of having more cores. However, we also wanted to include some of the "High-End" Core i7 CPUs with 6-10 cores since Lightroom is sometimes used in conjunction with other applications like Premiere Pro where those CPUs are commonly used. 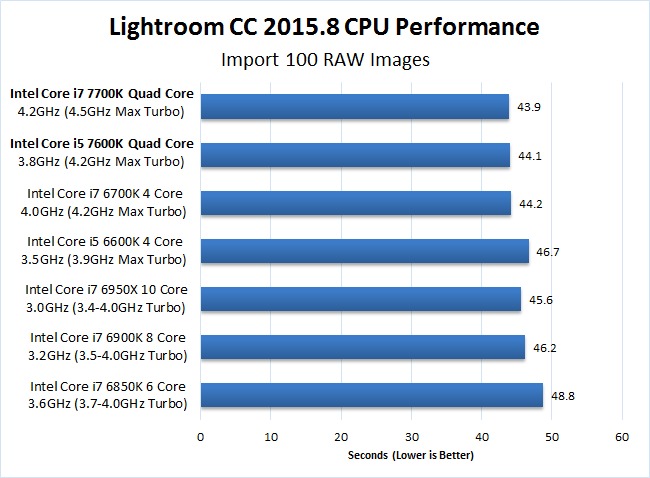 Starting off with simply importing images from a USB drive to the local SSD, both the Core i7 7700K and i5 7600K performed only marginally better than the old Core i7 6700K (a bit under 1% faster). However, it is worth pointing out that the new Core i5 7600K is noticeably faster (by about 6%) than the old i5 6600K. This is mostly a straight file copy task, however, so be aware that having a faster USB drive as your import drive will likely make a bigger difference than having a faster CPU. 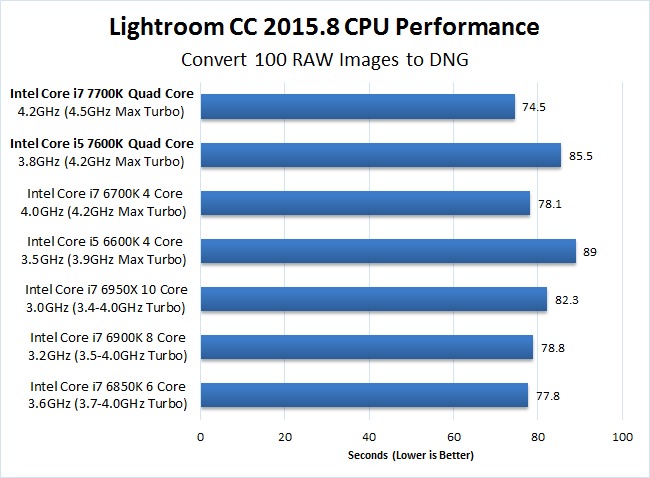 Converting from RAW to DNG gives us some very interesting results. Both of the new Kaby Lake CPUs were about 4-5% faster than their old Skylake equivalents, although this time the Core i5 7600K was noticeably slower than the i7 6700K. In fact, both of the Core i5 CPUs saw a moderate performance hit, clocking in at roughly 14% slower than their Core i7 counterparts. Some of this may be due to the slightly lower frequencies they run at, but a more likely explanation is that this task benefits from Hyperthreading which the i5 CPUs do not support. 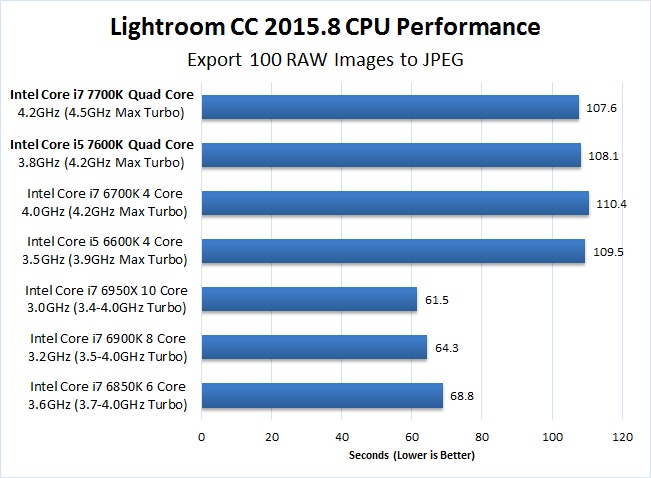 Exporting images is one of the few tasks in Lightroom that benefits from having a higher number of cores, which is why the "High-End" Core i7 CPUs with 6-10 cores performed so well. For the quad core CPUs, the new Core i7 7700K and i5 7600K were both ~2% faster than the i7 6700K, although there was only a .5% difference between the two CPUs. 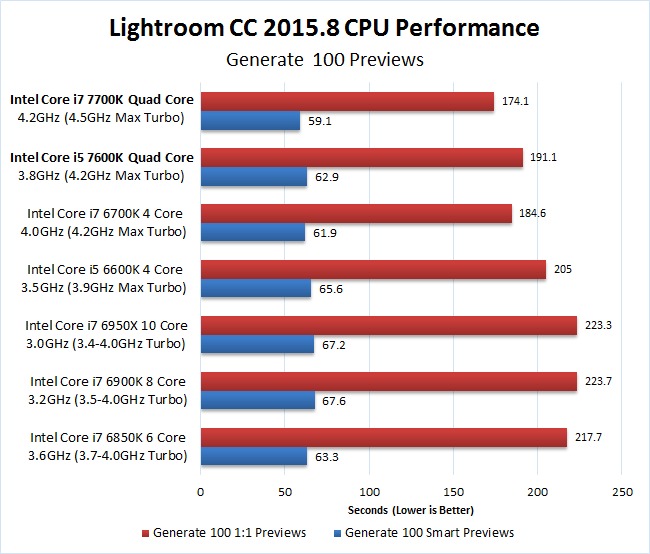 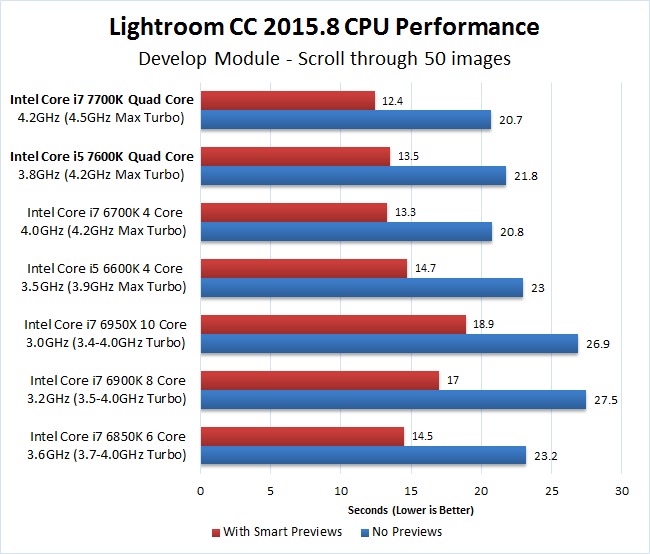 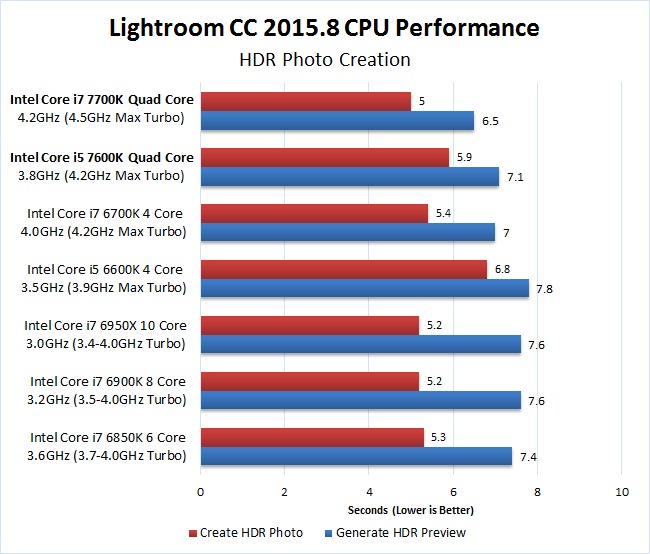 Creating HDR photos in Lightroom is typically a two step process. First, Lightroom generates a preview for you to verify everything looks right, then it actually creates the HDR photo. Oddly enough, generating the preview actually takes longer than creating the HDR photo itself. 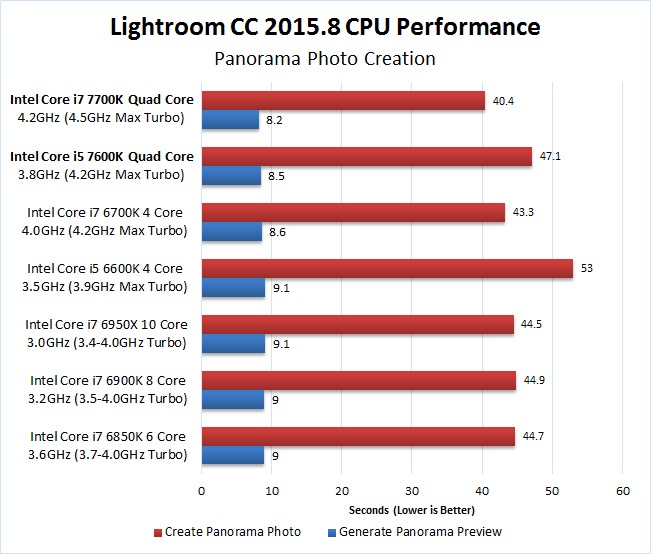 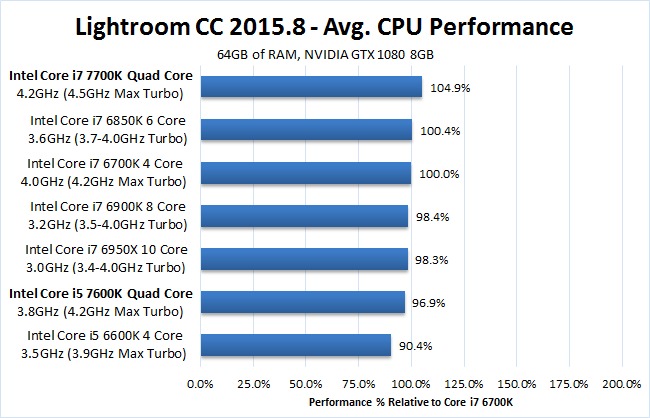 While not shown very accurately in the chart above (since the results in that chart are relative to the Core i7 6700K) there is a good amount of performance difference between the two new Kaby Lake CPUs. In fact, the Core i7 7700K is on average about 8.5% faster than the Core i5 7600K.

A 5-7.5% gain in performance over the previous generation CPUs isn't terribly great, although in reality it isn't all that much less than we have come to expect over the last few years. Huge 50% performance gains from new CPUs simply do not happen anymore as we get closer and closer to the limits of current manufacturing technologies. Is this small gain in performance worth upgrading from an i7 6700K to an i7 7700K? That is really only something you can answer for yourself, but probably not. Is it worth using an i7 7700K if you are already planning on purchasing a new system? Considering it shouldn't be any more expensive than the old i7 6700K we would definitely say "yes!"