The last few months have seen a flurry of product launches. Only a few weeks ago, AMD launched their new Ryzen 7000 series CPUs and new motherboards. Then Intel delivered the new video cards, the Ark A750 and A770, followed less than a week later by Nvidia’s new flagship GPU, the GeForce RTX 4090.

And now, Intel is launching their new 13th Gen Intel Core processors – code named "Raptor Lake". Unlike AMD's Ryzen 7000 Series, the Intel 13th Gen processors should be able to be dropped into any motherboard that supports the previous 12th Gen CPUs, and maintain support for both DDR4 and DDR5 memory. We did get a bump in terms of what RAM speed is officially supported, but from a platform view, the 13th Gen is pretty much a drop-in upgrade from 12th Gen.

Cinema 4D users often need a combination of single-core and multi-core performance depending on their specific task. Traditionally, modeling, animation, and certain physics simulations require few fast cores. Conversely, rendering, fluid sims, and some plugins perform better with more cores. However, Maxon has been pushing C4D users to Redshift’s GPU rendering instead of the native CPU renderer, and recent updates to Cinema 4D have moved many physics simulations to the GPU as well. 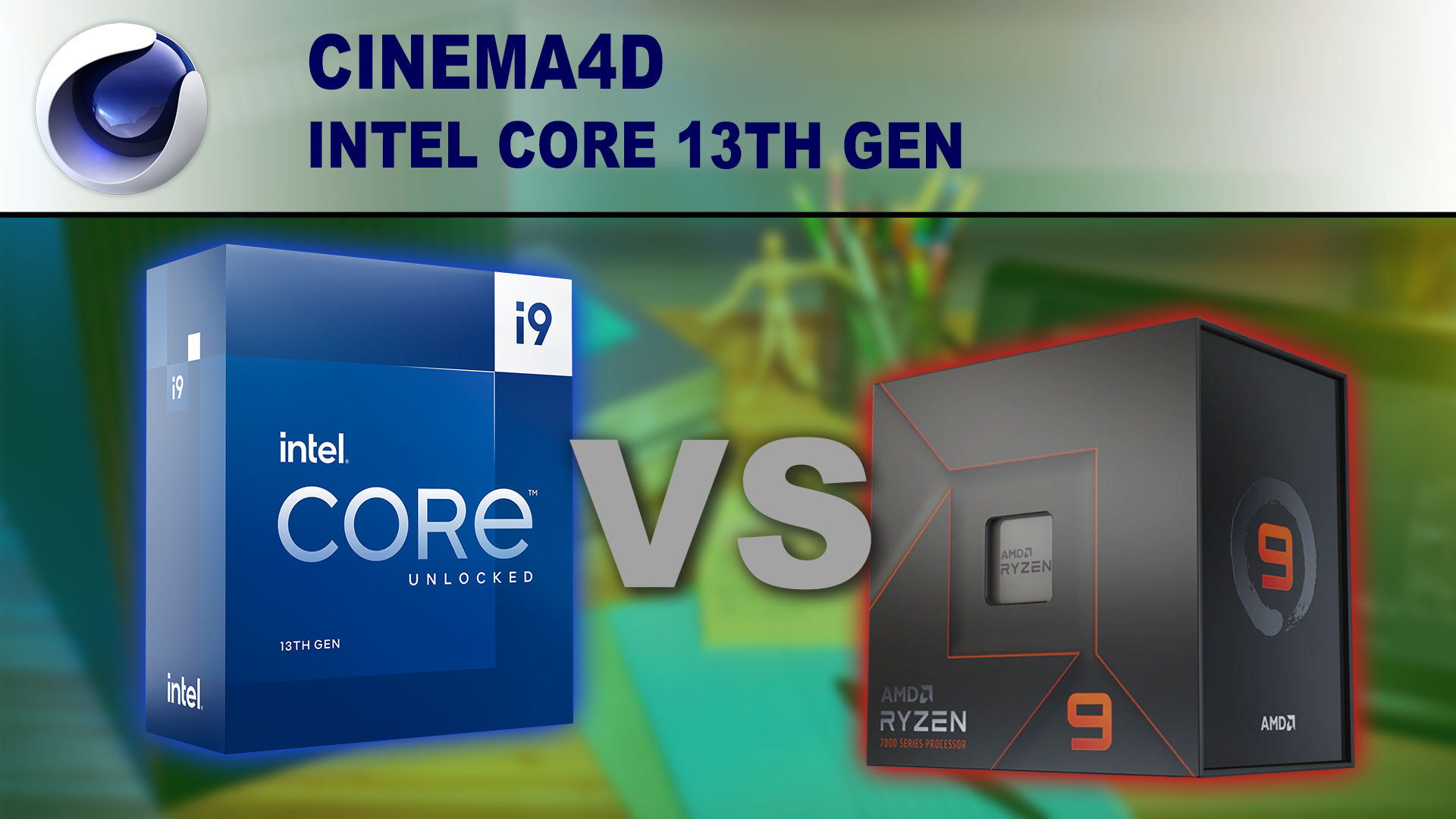 In this article, we will be using Cinebench R23 from Maxon to examine the performance of the new 13th Gen Intel Core Processors and compare them to AMD's Ryzen 7000 series, as well as the previous 12th generation Intel Core CPUs.

If you want to read more about the new Intel Core 13th Gen CPUs and what sets them apart from the previous generation, we recommend checking out our main 13th Gen Intel Core Processors Content Creation Review article. That post includes more detailed information on the CPU specifications, testing results for a range of other applications including Lightroom Classic, Premiere Pro, After Effects, and Unreal Engine; as well as all the test setup details for both the hardware and software used in our testing. Also in this testing we are not using Precision Boost Overdrive (PBO) on AMD or MultiCore Enhancement (MCE) on Intel so we can see the baseline performance. Each will give their respective CPU a few extra percent while consuming more power and making more heat. To read more about those features and why we aren’t using them, you can refer to the articles on the Impact of PBO and the Impact of MCE. 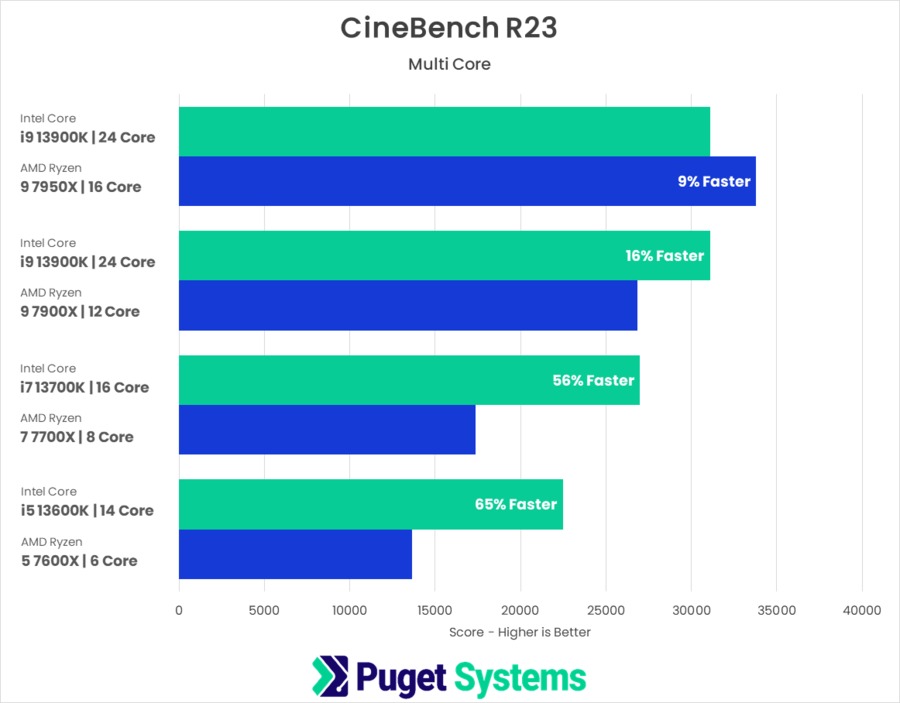 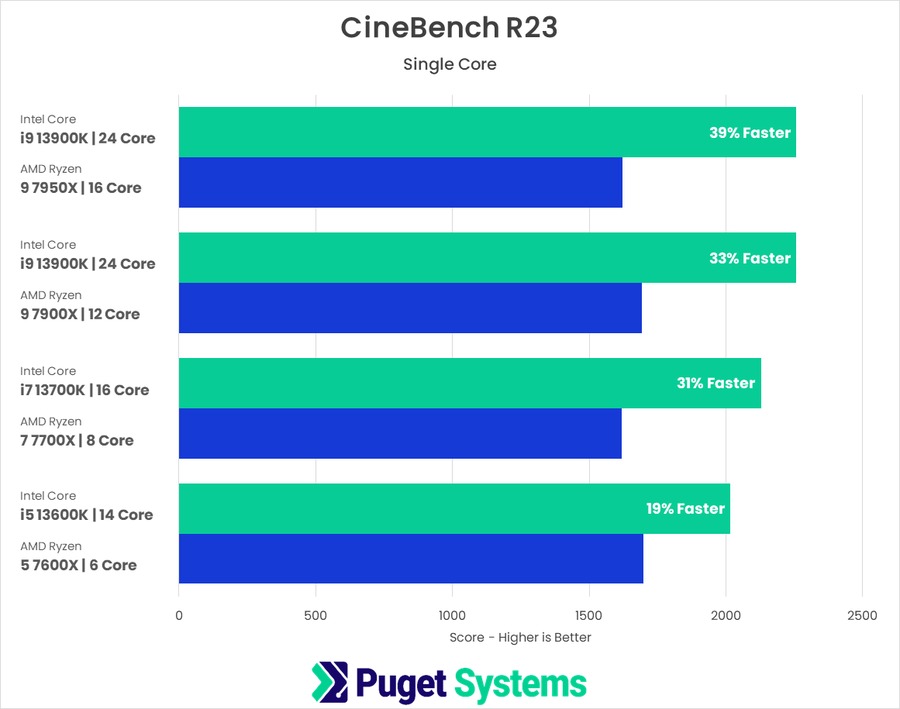 To start off our analysis, we wanted to look at how the new 13th Gen Intel Core CPUs compared to AMD's Ryzen 7000 series. The MSRP pricing for Intel and AMD don't exactly match, but in most cases, the comparisons we are making in the chart above are looking at CPUs that have an MSRP within $40 of each other. The exception to this is the Core i9 13900K vs Ryzen 7950X since Intel doesn't currently have a CPU that is on par with the Ryzen 7950X in terms of MSRP ($699). We didn't want to leave the 7950X out, so we decided to include the 13900K twice. First versus the 7900X (a price/performance comparison), and second versus the 7950X (a best-of-each-generation comparison)

If you are interested in the exact MSRP for each of these CPUs, we have a full breakdown in our main AMD Ryzen 7000 Series Processors Content Creation Review article.

The top tier Ryzen Intel Core 13900K made big strides and came within 9% of the Ryzen 7950X, the current top consumer-grade CPU. However, the AMD CPU is over $100 more than the 13900K. This is close enough that future BIOS updates or any changes to PBO/MCE setting could tip it either way. There really isn’t a bad choice between the two. Do note that while they have different core counts, they have the same number of threads. This is because AMD allows for multithreading on all of its CPU cores, While Intel only has hyperthreading on 8 of its 24 cores. The result is both will appear as having 32 logical cores in Windows.

Moving on to the lower-end parts, Intel’s lead continues to grow. This says a lot about the performance of Intel’s parts and the amazing value they provide. The new Intel 13700K is an impressive 56% faster than the Ryzen 7700X. Meanwhile, the Intel 3600K is 65% faster than the 7600K. Intel really gives a great value proposition on the lower end.

Looking at the Single Core performance, which covers tasks such as modeling and animating, we see Intel had a large lead. The 13th Gen ranges from 19-39% faster than the Ryzen 7000 series. Do note that this is one area in that we saw a big difference when enabling PBO on the Ryzen systems. Even then, they scored right at 2000 points, which is still behind Intel, which is also running at stock speeds. Enabling MCE on Intel would likely further their lead. 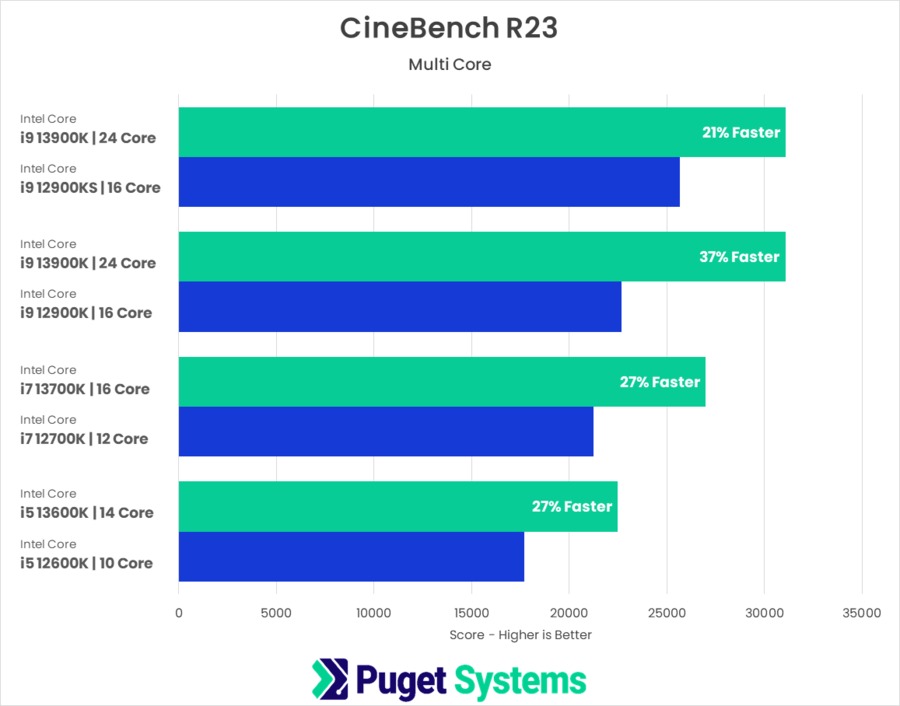 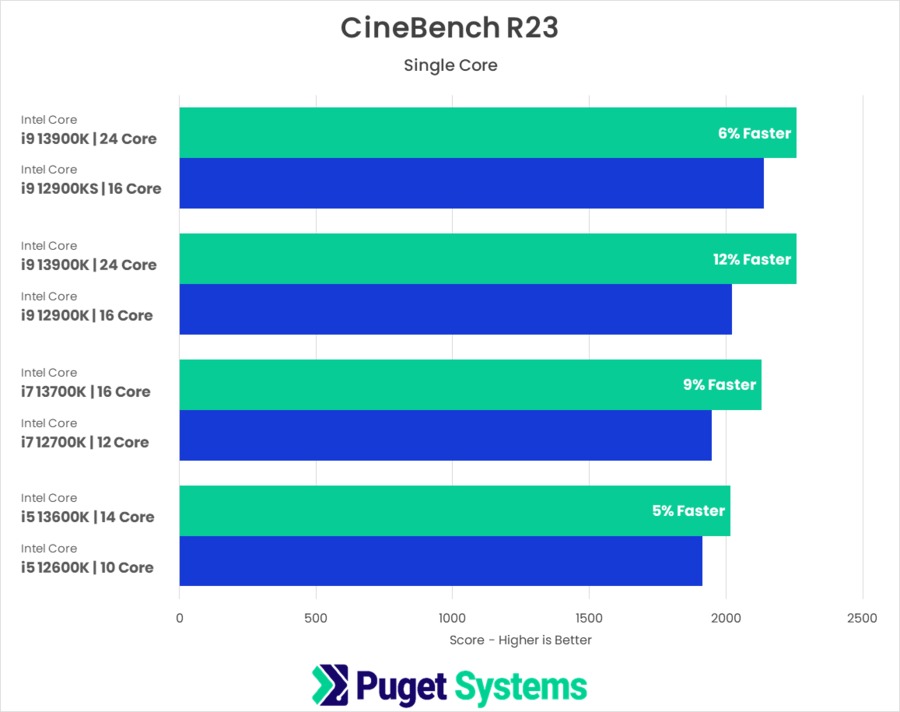 In the previous section, we examined how the new 13th Gen Intel processors stack up against AMD’s newest Ryzen 7000, but we should also examine how they compare to the previous 12th Gen Intel CPUs. As we can see from the chart, there is a 21-37% improvement across the board. The combination of additional efficiency cores, higher boost clocks, and IPC improvements add up to a great generational improvement.

How well do the Intel 13th Gen CPUs perform in Cinema 4D?

Keep in mind that the benchmark results in this article are strictly for Cinema 4D and that performance will vary widely in different applications. If your workflow includes other software packages, we highly recommend checking out our 13th Gen Intel Core Processors Content Creation Review article which includes results and links to in-depth testing for a range of other applications including Premiere Pro, After Effects, Lightroom Classic, DaVinci Resolve, and Unreal Engine.