Skip to content
Always look at the date when you read an article. Some of the content in this article is most likely out of date, as it was written on January 24, 2013. For newer information, see our more recent articles.

Closed-loop liquid cooling units are a great way to get exceptional cooling without the hassle and risk of traditional full-system liquid cooling. One of these coolers, the Corsair H60, has served us very well in our Puget Hydro CL3 liquid cooling systems. As happens with most computer hardware, Corsair has recently created a new revision with an aim at further improving the H60. One thing we want to be clear on is that although we are adding "Rev.2" to the product name, Corsair is not actually changing the name from "Corsair Hydro H60". This means that unless you look at the part number or pictures, there is no way to tell the original version apart from the new one.

That detail aside, the new revision has a number of changes which combined should add up to an overall increase in performance.

The most noticeable change to the H60 is the move to much larger diameter rubber tubing to aid in efficiently transferring the heat from the CPU to the radiator. The radiator itself has not been changed much, but the included fan has been upgraded to a newer model. In the next section, we will be testing this fan to see if it is an improvement over the original fan.

Beyond the visual move to a shiny black cover, the pump unit has also received some less noticeable, but very important upgrades. The mounting system uses the same concept as the original, although the mounting bracket fits over the top of the pump rather than being held in place with screws. There is even a pair of small magnets to hold the bracket onto the pump unit, which makes it easy to install even though it is in actuality two separate pieces. These are small details, but combined really help make it easier to work with.

We do not have any specs for the pump itself, but it has received at least some improvements. The PCB is much larger, and although it makes the pump look bigger as well, the pump is actually about the same size. It has, however, been moved to be closer to center of the CPU. The pump on the new revision is slightly louder than the original, but once the unit is installed into a chassis, the difference should not be detectable. The copper heat transfer plate below the pump has not changed, although the screws have been changed to more standard Philips head screws.

Corsair does not have published specs for the original H60 fan, so the only way to tell if the new fan is better than the original is for us to do our own testing. Our first test is a simple reading of the fan RPM using a tachometer. A Zalman Fan Mate was used to set the fan speed to 25, 50, 75 and 100 percent of the fan's maximum speed. 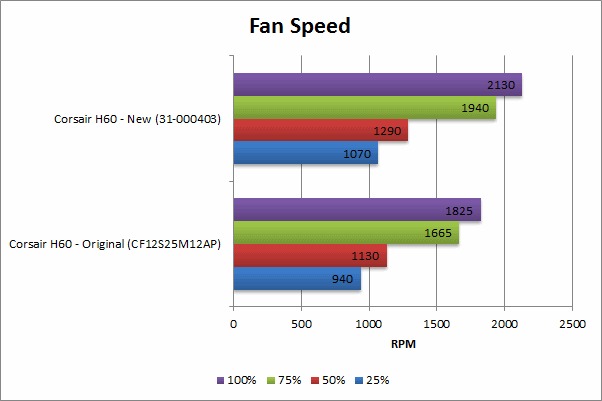 This test shows that the new fan spins faster, but that does not necessarily mean that it has better airflow or is any louder.

To compare the airflow of the new fan against the original H60 fan, we used an anemometer (Extech AN100) with a custom adapter to adapt from 120mm fan to the smaller 80mm diameter of the anemometer sensor. The adapter is 200mm long, giving us a smooth, gradual slope from the 120mm side to the 80mm side. Using this type of adapter means that our CFM readings will be lower than the manufacturer's specifications – which are taken in an open-air environment – but should do a good job at giving us comparison readings. We will also repeat the test with the original H60 radiator installed onto the exhaust side of the fan to give us an idea of how each fan performs when installed onto a radiator. 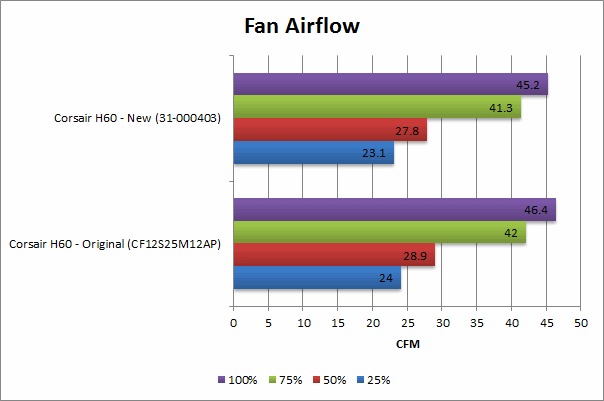 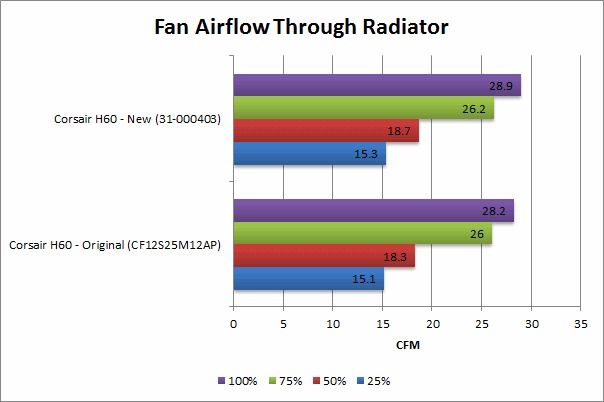 Interestingly, the original H60 fan has better unrestricted airflow, but the new fan does better when installed onto the radiator. This indicates that the new fan has better static pressure which makes it better for cooling systems like the Corsair H60.

This leaves noise levels as the final comparison point. To test both fans, our dBa meter was placed at a distance of two inches at a 90 degree angle from the side of the fan. This is much closer than dBa readings are normally taken at, but we expect the difference between the two fans to be very small so we would rather have slightly exaggerated results. Because of this, our measurements will be in no way comparable to the manufacturer's specifications of noise. The ambient noise level during our testing was 27 dBa. 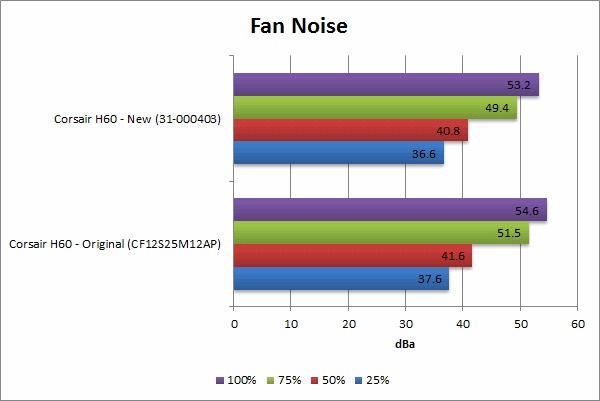 We tested both the original Corsair H60 as well as the new revision using the hardware listed below:


Both coolers were tested with the original H60 fan (CF12S25M12AP), the new H60 fan (31-000403), as well as a Scythe Slip Steam 1300 RPM fan which will act as a baseline. We also tested using the new H60 fan running at 12V (dynamic fan throttling disabled). This should give us a clear idea of how the new revision compares to the original Corsair H60 across a range of fans. 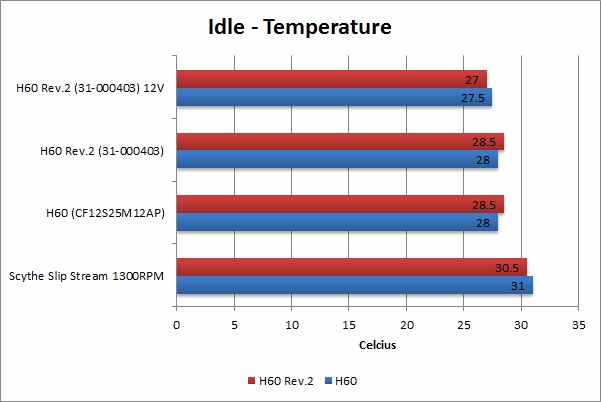 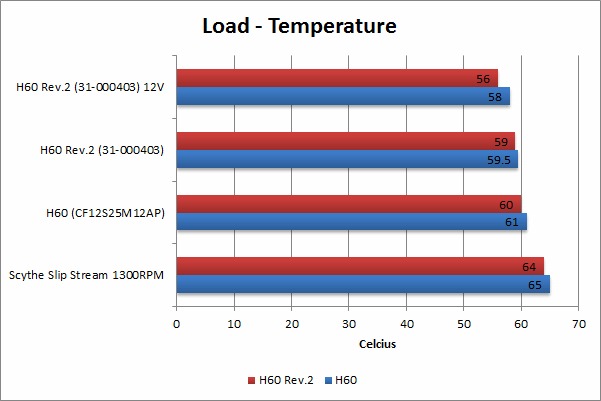 The last remaining portion of testing is to see if the fan is spinning any faster (and thus louder) with the new revision. 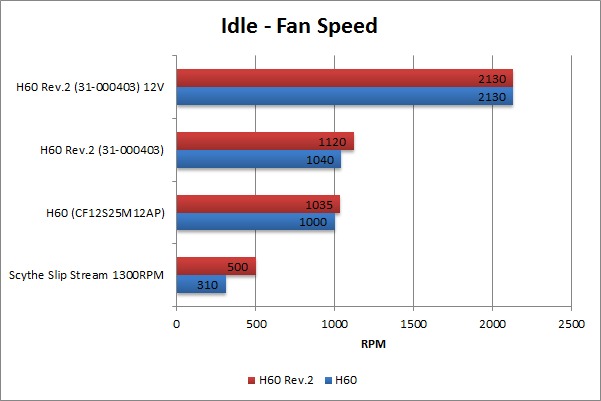 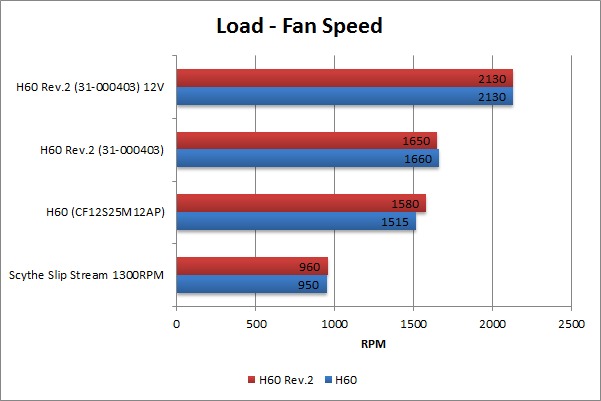 Our testing showed some fluctuations in fan RPMs, but overall the differences are minor enough to attribute to normal testing fluctuations. The only one that showed a large variance was at idle with the Slip Stream 1300RPM fan. However, in our experience, when a fan is running at very low RPMs, the fan speed is very inconsistent. So even though 190 RPM would normally be outside of normal testing variations, in this case it is acceptable.

In addition to having a better overall build quality, the new revision of the Corsair H60 is easier to install and has better performance than its predecessor. With the included fan, the new revision should produce CPU temperatures roughly 2 °C lower than the original. The new fan has also been upgraded to one that is quieter, yet moves more air through the radiator; so the new version is also a bit quieter.

This means that in every aspect we tested, the new revision of the Corsair Hydro H60 is an improvement over the original. The only negative thing we can say about this product is that Corsair did not change the cooler's name – even to add a revision number – which may lead to some confusion for those looking specifically for the newer revision.