Skip to content
Always look at the date when you read an article. Some of the content in this article is most likely out of date, as it was written on May 31, 2005. For newer information, see our more recent articles.

As a custom computer provider, Puget Custom Computers fills a niche market — some of the most popular computers we sell are computers that not a lot of other companies will dare to build. The two requests we hear most often is that the computer be fast, and that it be quiet. Unfortunately, that’s a tough mix! As manufacturers continue to release faster (and hotter) products, their only way to adequately cool those products without bigger and louder fans is to use more advanced cooling technologies. When it comes to building these high end computers, there is no room for cutting corners, and even a component like thermal paste can make a significant difference. When we set out to investigate all the different thermal pastes out there, we were surprised to not find a comprehensive comparison of modern products…so we decided to run our own tests! In this article, we will compare the performance of the top rated thermal pastes, so that you can make informed decisions about what will go into your next computer system!

We started by searching for the most popular high end products. The list we settled on was: 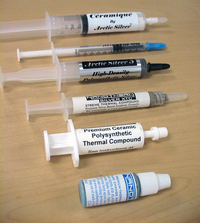 Note that the Thermalright paste we tested came bundled with a Thermalright XP-90 heatsink, and we intended to give us a rough idea of what the performance of the more generic products was like.

We applied the thermal paste according to manufacturer instructions. The only exception to this was that Arctic Silver recommends running the machine up to 200 hours for the compound to “break-in” and achieve full cooling effect. In the interest of time, we did not follow this step.

It is of interest to note that the way in which we applied the thermal paste seemed to make little difference. It is well known that the best application of the paste is a thin layer — as thin as possible while maintaining full coverage and contact. We conducted two tests of Arctic Silver Ceramique. In the first test, we spread the paste evenly in a thin layer. In the second test, we placed a bead of compound in the center of the CPU, allowing the pressure of the heatsink to cause it to spread to the rest of the chip. Both types of application ended up giving the same temperatures in our tests.

We also noted that the Nanotherm PCM+ paste had a watery consistency that made it more difficult to spread evenly. It is supplied with a rubber finger for application.

For our measurements, we used a high end setup on an open bench. 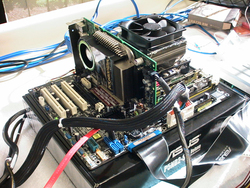 This system was run with no background tasks or processes. For our idle measurements, we left the system on the desktop. For load measurements, we ran Prime95. Since Prime95 is not capable of using multiple processors, hyperthreading was disabled on the system. All readings were taken after allowing the temperatures to stabilize for half an hour. Temperature readings were taken with Asus Probe 2. We found it to record temperatures about 3C lower than readings taken with a separate thermal probe, but since all of our readings were done in the same way, we did not regard this as an issue. Readings of the ambient temperature were taken at the same time as every other measurement, and we have adjusted our results to a baseline ambient temperature of 23C. For reference, our full dataset is also provided at the bottom of this review. 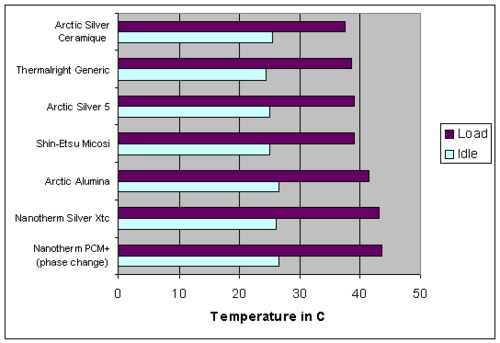 It was surprising to find the generic paste as one of the better performers. Thermalright must bundle some good stuff with their heatsinks! We were happy to see the Arctic Silver Ceramique perform so well — we use it on a lot of our builds!