Install TensorFlow with GPU Support the Easy Way on Ubuntu 18.04 (without installing CUDA)

TensorFlow is a very important Machine/Deep Learning framework and Ubuntu Linux is a great workstation platform for this type of work. If you are wanting to setup a workstation using Ubuntu 18.04 with CUDA GPU acceleration support for TensorFlow then this guide will hopefully help you get your machine learning environment up and running without a lot of trouble. And, you don't have to do a CUDA install!

This guide is for Ubuntu 18.04 but I will also be doing a similar post using the latest Windows 10 build.

Ubuntu 18.04 is out and in my opinion it is a big improvement over 16.04. 18.04 is the latest LTS (Long Term Support) build of Ubuntu. It will become the standard base platform for a lot of projects. There is usually some lag time before packages and projects move to a new base platform like Ubuntu 18.04, however, at this point nearly all of the projects that I care about are already supported on 18.04.

I said "nearly all" ...! Right now I have Ubuntu 18.04 running supported version of Docker, NVIDIA-docker v2, Virtualbox, Anaconda Python, etc, there is only one package that I generally install that is not (officially) supported on 18.04 yet. That one package is NVIDIA CUDA. I had waited to write anything about Ubuntu 18.04 until CUDA 9.2 was released because I was sure it would have install support for 18.04. Well, guess what, it doesn't. For Ubuntu the recent 9.2 CUDA release only has installer support for 16.04 and 17.10! I was really surprised to see that. 16.04 makes sense but 17.10 is a short term intermediate release and it is similar enough to 18.04 that I don't understand why 18.04 didn't happen. There may be something broken that they just decided to wait to fix rather than delay the 9.2 release any further. That would be understandable and reasonable.

I will do a detailed post on how to do an Ubuntu 18.04 install including an unofficial CUDA 9.2 install. In this post I am assuming you have successfully installed Ubuntu 18.04. If that is not the case then you may want to wait for my detailed install post.

If you are not doing CUDA development work then you may not need to install CUDA anyway. The focus here is to get a good GPU accelerated TensorFlow work environment up and running without a lot of fuss.

I'm adding a note here about some issues that have come up in the comments. If you see the following error when you try to run a TF or Keras job it's because your NVIDIA display driver is not new enough for the new TF and Keras builds on the Anaconda cloud i.e. they are are linking against CUDA libs that need the nvidia-396 runtime and you have the nvidia-390 runtime installed.
Internal: cudaGetDevice() failed. Status: CUDA driver version is insufficient for CUDA runtime version

You should update your NVIDIA driver!!. Use either the "Software and Updates" GUI tool under the "Driver" section or update the driver manually from the command line like,
sudo apt purge nvidia*
sudo add-apt-repository ppa:graphics-drivers/ppa
sudo apt install nvidia-driver-430

Anaconda is focused toward data-science and machine learning. It installs cleanly on your system in a single directory so it doesn't make a mess in your systems application and library directories. It is also performance optimized and links important numerical packages like numpy to Intel's MKL. Most importantly for this post, it includes easily installed modules for TensorFlow that include the CUDA dependencies!

That should bring your entire base Anaconda install up to the latest packages.

There is a GUI for Anaconda called anaconda-navigator. I personally find it distracting/confusing/annoying and prefer using conda from the command-line. Your taste may differ! ... and my opinion is subject to change if they keep improving it.

There are many possible options when creating an environment with conda including adding packages with specific version numbers and specific Python base versions. This is sometimes useful if you want fine control and it also helps with version dependencies resolution. Here we will keep it simple and just create a named environment and then activate that environment and install the packages we want inside of that.

From a command line do,

I named the environment 'tf-gpu' but you can use any name you want.

Now activate the environment, (I'll show my full terminal prompt and output instead of just the commands)

You can see that my shell prompt is now preceded by the the name of the environment.

Do not follow the install documentation from the TensorFlow site! If you do you will have a painful time getting things working and you will have a nearly impossible to maintain install setup.

There is no good reason to do an (old) CUDA install and a pip install when you are using Anaconda Python. There is an up-to-date official Anaconda package for TensorFlow with GPU acceleration that includes all of the needed CUDA dependencies and it is well optimized for performance.

Lets install TensorFlow with GPU acceleration and all of the dependencies.

That's it! That's all you need to do!

Just running that one short command above gave the following list of packages to be installed. They are installed and isolated in the "tf-gpu" environment we created. There is no nasty mess on your system!

I've cut some of the packages out and just left the "most interesting" ones in this output listing.

You now have GPU accelerated TensorFlow 1.8, CUDA 9.0, cuDNN 7.1, Intel's MKL libraries (that are linked into numpy) and TensorBoard. Nice!

Note: the newer 'tensorflow-gpu' version will be updated from this.

Create a Jupyter Notebook Kernel for the TensorFlow Environment

You can work with an editor and the command line and you often want to do that, but, Jupyter notebooks are great for doing machine learning development work. In order to get Jupyter notebook to work the way you want with this new TensorFlow environment you will need to add a "kernel" for it.

With your tf-gpu environment activated do,

With this "tf-gpu" kernel installed, when you open a Jupyter notebook you will now have an option to to start a new notebook with this kernel.

Note: I have a newer post that might be a better to follow than this example. How to Install TensorFlow with GPU Support on Windows 10 (Without Installing CUDA) UPDATED! Yes, even though that is a Win10 install everything after getting Anaconda Python working is pretty much the same on Windows and Linux!

In order to check everything out lets setup LeNet-5 using Keras (with our TensorFlow backend) using a Jupyter notebook with our "TensorFlow-GPU" kernel. We'll train the model on the MNIST digits data-set.

With the tf-gpu environment activated do,

You now have Keras installed utilizing your GPU accelerated TensorFlow. It is that easy!

Note: the newer 'tensorflow-gpu' includes Keras so you don't need to do a seperate install.

From the 'New' drop-down menu select the 'TensorFlow-GPU' kernel that you added (as seen in the image in the last section). You can now start writing code!

Following are Python snippets you can copy into cells in your Jupyter notebook to setup and train LeNet-5 with MNIST digits data.

Load and process the MNIST data

Set log data to feed to TensorBoard for visual analysis

After running that training for 15 epochs the last epoch gave,

Look at the job run with TensorBoard

It will give you an address similar to http://i9:6006 Open that in your browser and you will be greeted with (the wonderful) TensorBoard. These are the plots it had for that job run, 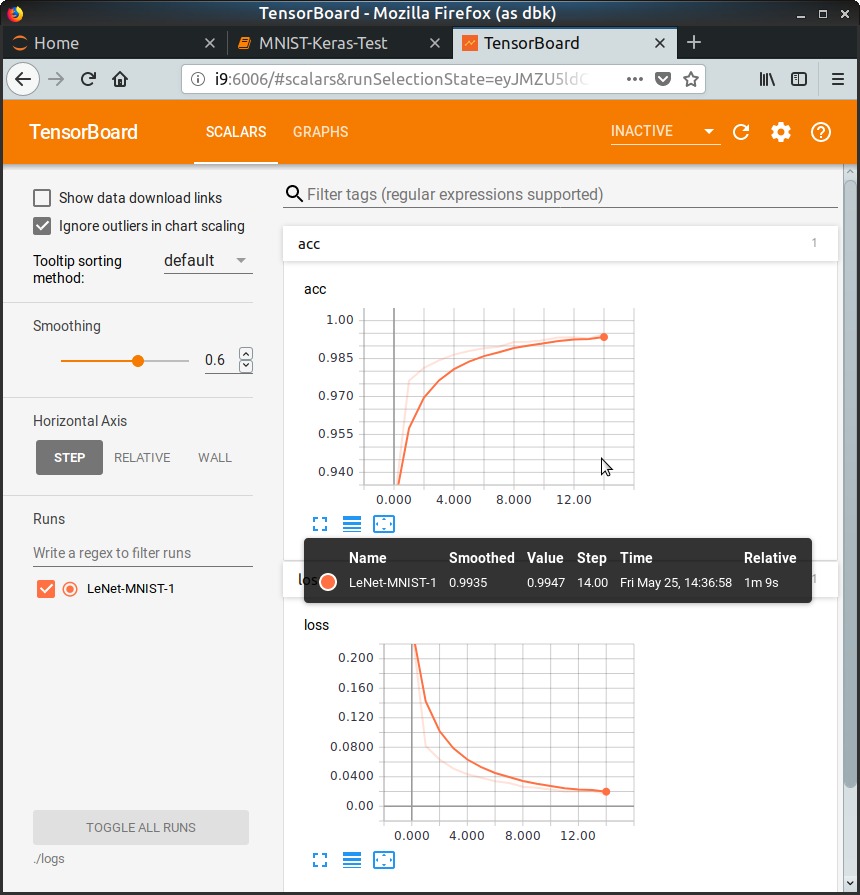 That was a model with 1.2 million training parameters and a dataset with 60,000 images. It took 1 minute and 9 seconds utilizing the NVIDIA GeForce 1080Ti in my system!