I had the pleasure of attending SC17 this past week. This is the big Supercomputing conference held yearly in the US. This is a meeting about computers and computing that is described by superlatives, fastest, biggest, most, costliest, etc.. This is the conference where the Top500 fastest computers in the world get announced. ARM was a hot topic at this meeting!

At SC17 there were several talks, panel discussions, workshops, and exhibits about ARM for HPC. I went to several of them. They were all packed!

For HPC and supercomputing the first CPU’s that probably come to mind are Intel Xeon processors. Racks full of dual socket Xeon nodes all connected together with some low latency high speed network interconnect. You probably don’t think of ARM in this setting. Well, think of that same kind of system but instead of those Intel CPU’s substitute big powerful 64-bit ARM processors. Nodes like this, 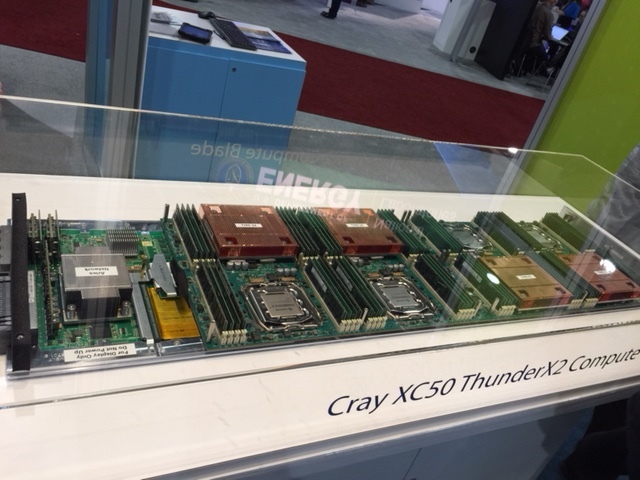 The 8 processors in that node above are Cavium Thunder X2 ARM processors. That is a node that would go into a Cray XC50 Supercomputer … lots of those nodes. Half of that node can be populated with NVIDIA Volta SXM2 socketed GPU’s too.

These Cavium Thunder X2 processors are ready for deployment now and performance looks really good. There are also older ARM processors that have been used over the last few years. The newest designs are serious alternatives to x86 type processors from Intel and AMD.

How good are these processors? I saw the following graph several times at the meeting. (Prof. Simon McIntosh-Smith University of Bristol) 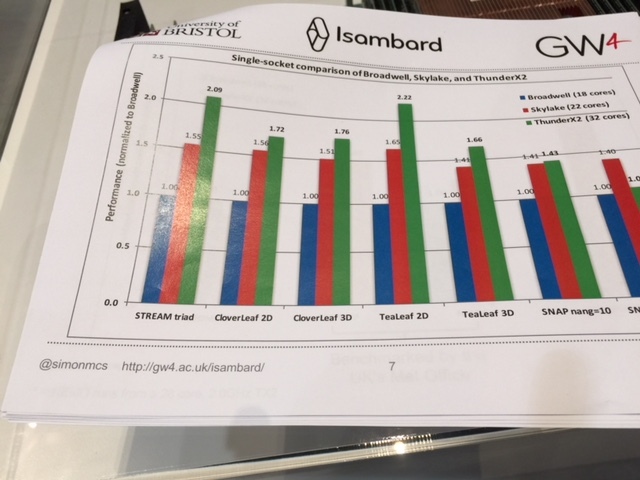 The green bar is for a 32-core Thunder X2 ARM processor. You can find similar kinds of “tall bars” for Qualcom’s newly released 64-bit ARM processor Centriq 2400 processor Those were also on display at SC17.

Fujitsu will be building an “exa-scale” supercomputer with ARM processors in the next few years. What does exa-scale mean? Like the fastest computers in the world right now only 20 times faster! ARM is a serious contender for HPC.

It was fascinating how much interest there was in ARM at this years meeting. There is a general air of dissatisfaction with the “normal” computing equipment that has been so strong for several years.

I should point out that AMD’s new EPYC processors drew a LOT of attention too. I had many interesting conversations about EPYC at the meeting. It seems that many big buyers are holding off on purchases until they can try these new AMD processors.

ARM is seriously capable of being used for heavy computing. The software ecosystem is coming together rapidly and by this time next year may be on par with the programing and usage capability of the current x86 environment. It’s really remarkable how rapidly this is developing. I don’t know for sure how this will develop for Workstations and more modest systems but it looks like a very serious contender. All of what I have talked about is still in development. Hardware and software needs to “settle”. It will probably be most of a year before the craziness with all the new hardware and software ecosystems stabilizes. We will be involved 🙂