Intel Purley platform, Skylake-SP, Xeon “Scalable” processors (Platinum, Gold, Sliver, Bronze) are here. All 58 of them! How are you going to sort out that mess? Well, hopefully this post will help.

I’ll try to sort these processors out by “use-case” to come up with a more manageable list of choices. I’ll trim the list of processors and do a price performance analysis for different usage scenarios. … What do I mean by “use-case”?

Software that has no parallelization is common. No multi-threads, no vectorization. This is common for code in scripting languages like Python and programs that are not performance critical or legacy code that no one has bothered to optimize. [note that scripting languages like Python are typically used as front ends for code that is highly parallel, … like numpy linked to the MKL library ]

This large class of programs have a multi-threaded implementation but do not take advantage of vectorization. These are programs that may have “task parallelism” but are not making heavy use of matrix vector math operations. These programs may have limited scalability unless they are embarrassingly parallel.

This is the ideal case for utilizing the features of these new processors. In this case high core-count and AVX-512 All-Core-Turbo (or AVX2 All-Core-Turbo for software that has not been updated) will likely determine performance. These are programs typical of HPC workloads like simulation and machine learning. Programs that make heavy use of matrix vector math operations should perform very well when utilizing AVX-512 and FMA operations. This of course assumes that the programmer has optimized their code! Programs that make library calls to Intel’s MKL (Mathe Kernel Library) or DAAL (Data Analytics Acceleration Library) should give excellent performance on the new Xeon processors.

Note: when the AVX vector units are under load the CPU clock frequency can be significantly lowered! This is true for AVX2 and especially significant for AVX-512.

This is one of the most disturbing cases. I occasionally hear someone say “I got the latest, best, hardware and my program doesn’t run any faster!” If the software is inherently I/O bound or the software is poorly written with bad memory layout, having lots of cache misses etc. it may be difficult to improve performance with “better” hardware. In some cases large per-core cache may help. Also, keep in mind that the L3 Cache (Last Level Cache) is shared across all cores. Therefore a high core-count CPU with a large total L3 Cache may help. If job run feasibility is limited by the amount of available memory then the Xeon processors that are marked by a trailing M will support up to 1.5TB memory each (I will not consider these processors in my analysis).

Who Cares about the CPU!

Lets face it, there are a lot of important modern programs, frameworks, and libraries that get their performance from GPU Acceleration. In particular programs that utilize NVIDIA CUDA on Tesla or GeForce graphics cards can out perform their CPU based counter-part by an order of magnitude! Some of these programs will still need good CPU support for sections of the code that cannot be accelerated on the GPU. Those code sections will fall into one of the classes listed above. For programs that get nearly all of their performance from the GPU you just need enough CPU to support the GPU’s

Let’s now start the process of weeding through this big pile of new processors.

There are too many Intel Xeon Scalable processor product ID’s.

Table of all 58 Processors Numbers

There they are. Which one do you want?!

Lets try to make this a bit more manageable. There are a lot of processors that can be eliminated from consideration ( for our purposes ).

To start, note that some of the processors have a letter at the end of their product ID number (M,F,T). These represent,

M we might occasionaly be interested in, but F and T we can eliminate for sure. Let’s also eliminate M since those processors are much more expensive than their “normal” version. They would also have the same performance as the “normal” version unless you really needed the large memory capacity. We can also remove the 2 “Bronze” processors since they are (lame) 1.7GHz with no Turbo-Boost and no Hyper-Threading. That gets rid of 25 processors from the list.

I’ll drop the processors that have a Non-AVX All-Core-Turbo clock frequency less than 2.5GHz. They drop down to 1.6GHz or less for AVX-512 All-Core-Turbo. Those are 4108, 4110, 4116 and 8153. That gives us 31 to eliminate leaving 27 to look at. That is still too many but we’ll need to look at use-case price performance to find the best processors. Here’s processor ID’s we will look at in more detail.

The first thing we need is a discriminatory metric to differentiate the processor performance. I’m going to use the following approximation to the theoretical performance,

This would give a number that could be interpreted as GFLOP/s (Billions of floating point operations per second). This is not a very good estimate of peak floating point performance for these complicated processors but it will serve our needs as a performance measure. [We’ll also consider cache size for memory bound application]

There are 5 different CPU clocks for these new Xeon processors!

Intel has worked hard to optimize the maximum performance they can get out of the design for these new Xeon’s. There is variability in the quality of the chips and they try to get the most performance they can. By doing this they end up with a lot of subtly (or not so subtly) different processors. They are trying to not waist silicon but they really have produced way too many processors in my opinion.

Lets look at some of the important numbers for these processors and then we’ll look at price performance plots for different software characteristics.

The following table has data for each of the processors we are considering without including data that is common to all of them.

Notes: The price is is Intel’s suggested price in USD. The CPU clocks are in GHz, the Memory clock is in MHz, the Cache sizes are in MB, and the TDP is in Watts.

I like looking at numbers but I will have several plots below to look at to find the best choice processors. A few processors in the table standout to me because of their obviously interesting features.

Lets see what the plots have to show us.

I’m going to start with the Price vs Relative Performance plots for the best case software. That’s software that is highly parallel (Multi-threaded) and highly vectorized for AVX-512. This is the software that would expose the best performance of the processors. 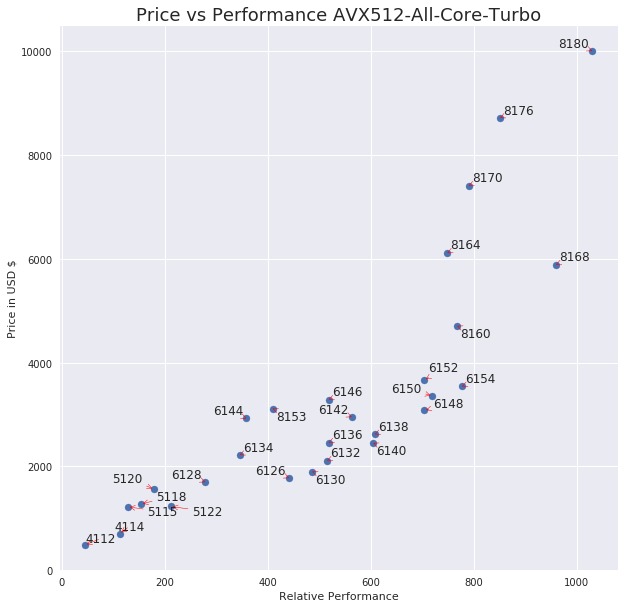 There are 11 processors that don’t look very attractive in this plot and I have the advantage of knowing that they don’t look very good in any of the other many plots that I made. I am going to remove these from the data set and redo this plot and use the reduced dataset for the remainder of the plots.

The next plot is excluding these processors. 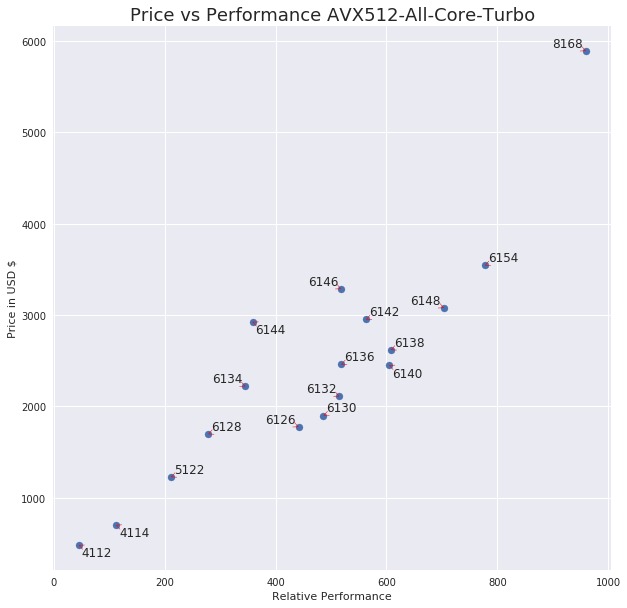 This plot gives a clearer picture of the relative performance. The trend and reative placement of the processors differs only slighty for the AVX2 All-Core-Turbo case so we wont include that plot.

The next plot is using the All-Core-Turbo frequency scaled by the per-core Cache. This give more weight to the processors that may do better for jobs that are memory bound. 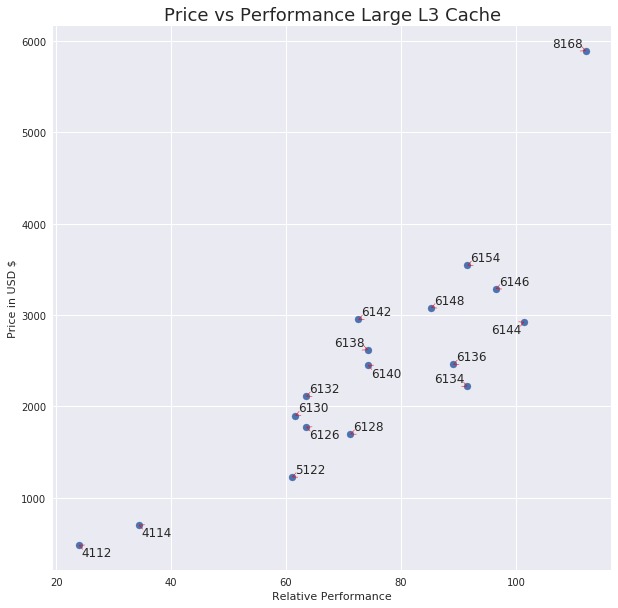 The last plot is the using the All-Core-Turbo frequency. This has a similar distribution to the plot including AVX-512 but does shift a few processors around without making large changes in relative “value”. 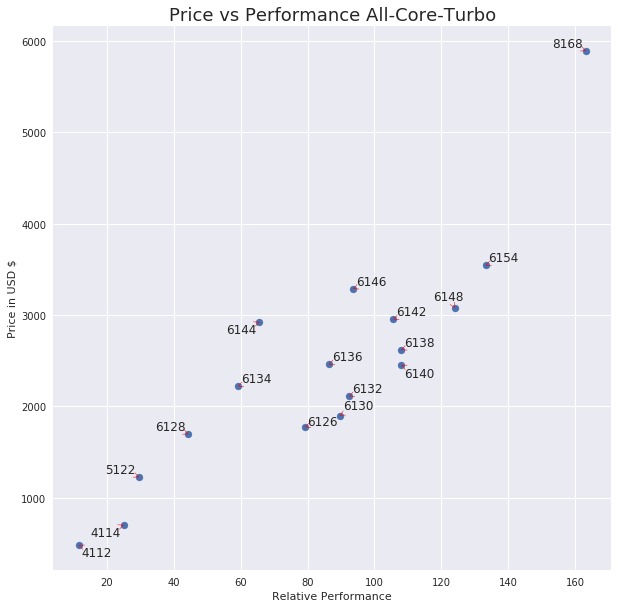 From these last 3 plots the following processors stand out as offering good performance and value for a variety of use-cases. I’ll now try to break down that usage.

My picks for best Xeon Scalable Skylake-SP processors (by Usage)

Notes: The price is is Intel’s suggested price in USD. The CPU clocks are in GHz, the Memory clock is in MHz, the Cache sizes are in MB, and the TDP is in Watts.

Here’s a breakdown along the use-case ides I presented near the top of the post.

There you have it! Those are my picks and recommendation. You may have a different opinion! Hopefully the charts and tables give you something to consider if you have a use case that I didn’t include.

One thing that I didn’t discuss here is parallel scaling and Amdahl’s Law. This is important! I recommend that you look a the post I did for the Broadwell Xeons. There is an interactive chart in that post that painfully shows how less-than-perfect scaling can effect on high core count processor system performance. Intel Xeon E5 v4 Broadwell Buyers Guide (Parallel Performance)