The new Intel “Haswell E” desktop processors are out, and yes, they are really good! Along with the new processors we have new motherboards, chipsets, and DDR4 memory lots of good stuff. Matt has some very good articles up on all this new stuff. You should have a look…

I’m mostly interested in numerical performance and potential for use with scientific computing. I’ll be doing new hardware testing over the next couple of weeks so expect to see some interesting posts (assuming you get excited by numbers the way I do :-).

Intel has also just released a new version of their excellent compilers and tools, Parallel Studio XE 2015, so I’ll be giving the new compilers a workout too.

The first thing I usually run on new Intel hardware is the Linpack parallel benchmark optimized with the MKL numerical libraries. This will usually get you close to theoretical peak double precision numerical performance. I’ve got some numbers for the new Core i7 5960X and 5930K processors. I’ll show these in a chart with some other processors for comparison.

The Core i7 5960X outperforms the fastest and highest core-count Sandy Bridge dual Xeon system! Not bad for a “desktop” processor!

Note: Theoretical peak is complicated on the new generations of processors but it is basically

(384 billion double precision floating point operations per second ) From the linpack run we did we see over 90% of that … VERY GOOD!

The following chart has Linpack numbers from various systems and various versions of the Intel compilers that I’ve used, so the numbers should be taken as relative rather than absolute. ( I would take them with a +- 5% grain of salt –if that expression means anything to you!) 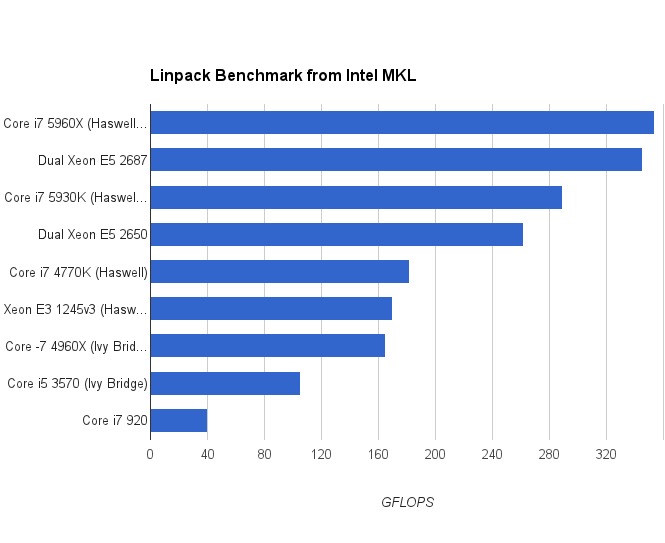