NVIDIA has released the Titan Xp which is an update to the Titan X Pascal (they both use the Pascal GPU core). They also recently released the GTX1080Ti which proved to be every bit as good at the Titan X Pascal but at a much lower price. The new Titan Xp does offer better performance and is currently their fastest GeForce card. How much faster? I decided to find out by running a large Deep Learning image classification job to see how it performs for GPU accelerated Machine Learning.

The Titan Xp offers 10-20% performance gain over the Titan X Pascal and the GTX1080Ti for training a large Deep Neural Network. 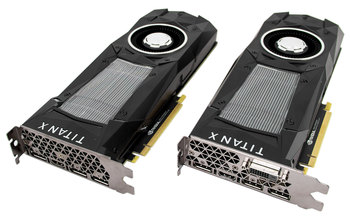 Visually the only difference between the Titan X and Titan Xp is the lack of DVI on the Xp!

The details about the test system and how the jobs were setup will follow the results. The primary results are for a training a Deep Neural Network (GoogleLeNet) for image classification with a 1.3 million image data set from ImageNet. I also have comparative nbody benchmark performance for several cards.

I have included results from a couple of older posts for comparison.

The next table shows the results of nbody -benchmark -numbodies=256000 (nbody from the CUDA samples source code).

The testing was done on my test-bench layout of our Peak Single (DIGITS GPU Workstation) recommended system for DIGITS/Caffe.

The OS I used for this testing was Ubuntu 16.04.2 install with the Docker and NVIDIA-Docker Workstation configuration I’ve been working on. See, these posts for information about that;

Following is a list of the software in the nvidia/digits Docker image used in the testing.

I used the training image set from
IMAGENET Large Scale Visual Recognition Challenge 2012 (ILSVRC2012)
I only used the the training set images from the “challenge”. All 138GB of them! I used the tools in DIGITS to partition this set into a training set and validation set and then used the GoogLeNet 22-layer network.

Many of the images in the IMAGENET collection are copyrighted. This means that usage and distribution is somewhat restricted. One of the things listed in the conditions for download is this,
“You will NOT distribute the above URL(s)”
So, I wont. Please see the IMAGENET site for information on obtaining datasets.

The NVIDIA Titan Xp is a great card for GPU accelerated machine learning workloads and offers a noticeable improvement the Titan X Pascal card that it replaces. However, for these workloads running on a workstation the GTX 1080Ti offers a much better value. There is also a compelling argument for the GTX 1070 since it is also an excellent value given the respectable performance it is capable of.